The Walking Dead season eight started off with a big win for Team Rick. Team Rick devised a plan of attack that seemed to be successful, but they left a man behind.  The Saviors may have been hit hard by Team Rick, but he won’t stay down for long.

So much happened this week!

Read the Full Recap of THE WALKING DEAD “Mercy”

The Damned starts off with the faces of the resistance.  The Alexandrians, Hilltoppers, and The Kingdom subjects are all split up at different Savior outposts. 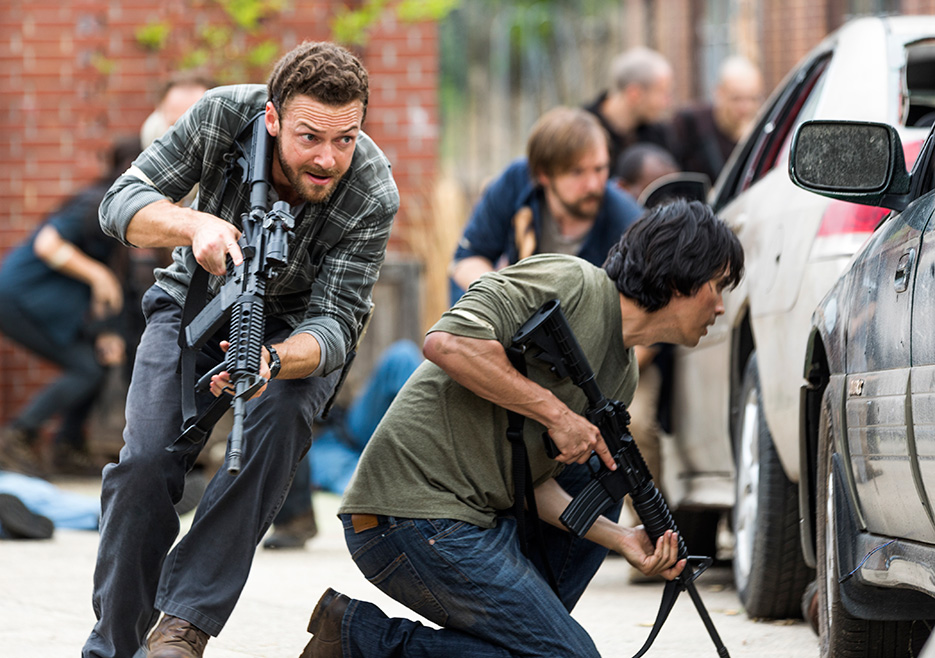 Ross Marquand as Aaron in The Walking Dead, “The Damned” amc.com

Aaron (Ross Marquand) leads a group of Alexandrians to the back of a Savior outposts.  They shoot at the Saviors and do their best to stay behind their armored cars.

The savior leader Mara (Lindsey Garrett) radios to someone inside to lock all of the stairwells.  The Saviors are trapped.  Mara tells her men to find them a way out.  Mara notices that Aaron and his men are not moving in. She tells her men to start moving toward them.

Scott (Kendrick Green) tells Aaron what the Saviors are doing, but Aaron instructs Scott to stay where they are.  The Saviors start moving in on them.  Eric (Jordan Woods-Robinson) moves to counterattack.

The dead Saviors start to reanimate.  Mara realizes why the Alexandrians didn’t move in on them.  A walker grabs Mara and bites her.

Morgan (Lennie James) and Jesus (Tom Payne) lead a group on the satellite outpost.  There is a moat of walkers that is hindering their progress.  Morgan decides he will take care of the walkers.  He asks Dianne (Kerry Cahill) to take care of the guards.  Andy (Jeremy Palko) and Freddie (Brett Gentile) asks Morgan if he needs them to go with him.  Morgan answers, “I don’t die.” Morgan goes to the fence and causes a commotion. The guards go to check it out and Dianne shoots them.  Morgan stops making noise, but lingers to look at the walkers in the eyes.

The group enters the outpost.  The hear men talking and make a  line around the hallway.  Morgan, Andy, and Freddie stand in front of a door where the men are talking.  They open the door and shoot the first guy who stands up. The men behind him have guns and shoot back. Morgan, Andy and Freddie fall.

Jesus and Tara (Alanna Masterson) open the door to a kitchen and find a guy in a closet. The guy is scared and keeps saying he is not a Savior.  Jesus and Tara have a mini argument about killing the guy. Jesus doesn’t want to kill him. Tara says they have to.  The guy takes the opportunity to attack Jesus, take his gun, and hold it to his head.  Tara points her gun at the guy as he talks about how he going to use Jesus to get out of there.  The guy points the gun at Tara and Jesus hits him.  Jesus takes his gun back, but doesn’t kill the man. He hits him in the head and ties him up. Tara still wants to kill the guy, but Jesus says it’s not about him. 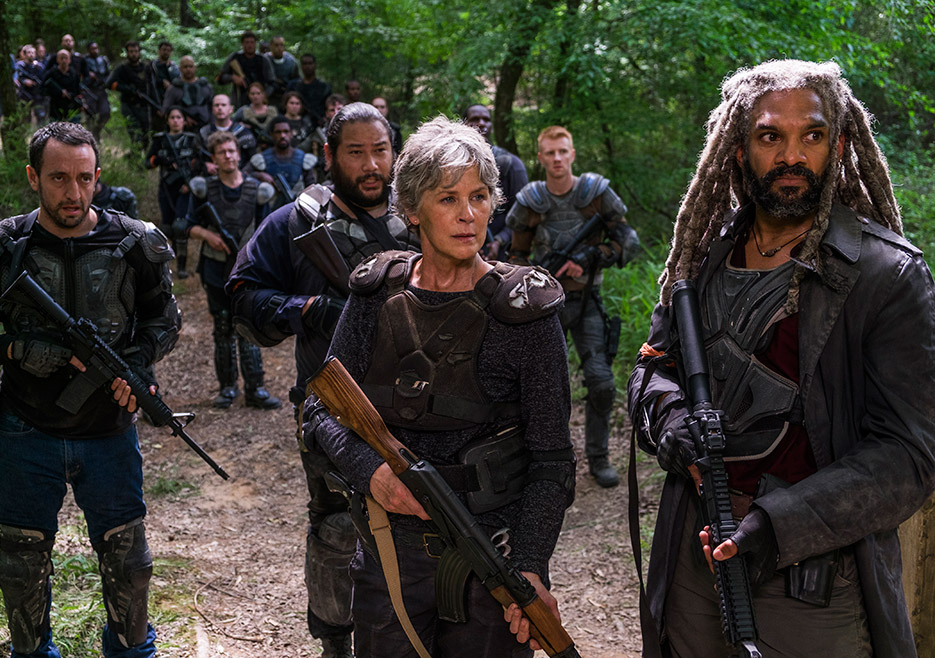 Melissa McBride as Carol, Khary Peyton as Ezekiel, Cooper Andrews as Jerry, and Carlos Navarro as Alvaro in The Walking Dead, “The Damned” amc.com

Carol (Melissa McBride) and the Kingdom were last seen at the Paze Industrial Research facility. A Savior set off a grenade when he saw them coming.  The grenade blew off the door to the research facility, releasing a lot of walkers.  Carol, King Ezekiel (Khary Peyton) and the others are able to get up in time to shoot all of the walkers, but the guard got away.  Carol says if he makes it to the next outpost, they are done for.  Ezekiel says they will go after the guard.  He sends one of his men back to the staging area.

The group goes into the woods to find the Savior who got away.  Carol is a little alarmed by Ezekiel’s optimism.  He says he has to fake it til he makes it. His confidence gives his people confidence and they win. Carol says they won’t all make it. Ezekiel knows there will be casualties, but he has to remain confident.  Daniel (Daniel Newman) tells The King that he found fresh blood. The Savior is bleeding. They can track him down. Jerry (Cooper Andrews) sets a golf ball with a tee sticking out to show their people which way they went.

Rick (Andrew Lincoln) and Daryl (Norman Reedus) are at another entrance to the outpost where Aaron and the Alexandrians are shooting up the place. They are looking for the Saviors’ guns.  Rick has instructions of how to find the guns.  They don’t find anything on the first floor, so Daryl kicks in the stairwell door.

They reach the top floor by climbing through the elevator shaft.  Daryl says the guns have to be there. Rick says that everything that Dwight (Austin Amelio) told them has checked out so far. They decide to split up to cover more ground.

Rick finds a locked door and thinks the guns are in there.   A guy attacks Rick from behind and they fight.  The Savior says the guns are not in that room.  Rick kills the guy and opens the locked door.  He finds a baby girl sleeping in a crib.  Rick is beside himself when he realizes the Savior was protecting his daughter.

Dianne calls to Jesus and Tara. The Saviors are falling back, so they follow.  After they all leave the hallway, Morgan wakes up.  He looks around and gets up with his gun ready to shoot.  He walks through the building shooting every Savior that he sees. At the same time he is thinking about a conversation he had with Rick.  Morgan didn’t want to kill the Saviors. Rick was trying to convince him that they had to kill them all.

Jesus and the others find a garage door. The Saviors are behind that door. Jesus tells everyone not to shoot first. Tara disagrees, but the door opens.  There is one man standing there with a gun.  Jesus tells him to lay down his gun and surrender. The Savior says living sounds good to him and puts down his gun.  Other Saviors come out from behind him and lay down their guns.   Tara tells Jesus that they can play this the hard way.  Maggie (Lauren Cohan) might listen to Jesus, but Rick will listen to her. 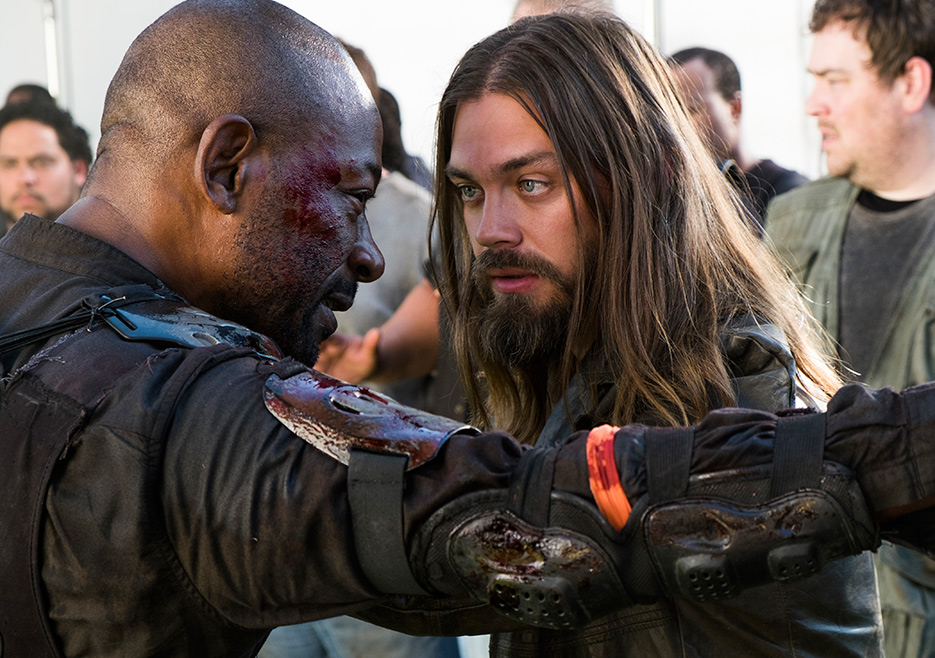 Lennie James as Morgan and Tom Payne as Jesus in The Walking Dead, “The Damned” amc.com

Morgan comes out of the outpost and the sun hits his face.  He comes out of his killing trance and sees that the Saviors have surrendered.  One of the Saviors recognizes Morgan. It’s Jared (Joshua Mikel), the Savior who shot Benjamin.  Morgan makes a beeline for Jared with his gun raised, but Jesus stops him.  Jesus says it’s not what they do.

Carol finds more blood on the leaves and they find the man they are looking for.  Shiva attacks the man, killing him.   Jerry finds a radio on the dead Savior.  He called for help and the Saviors are headed their way.  Ezekiel says they will be ready for them when they get there.

The Saviors continue to move towards half of the Alexandrians.  Tobin (Jason Douglas) and Francine (Dahlia Legault) are killed.  Aaron sees Eric is in danger. He is out of bullets so he gets in a car and backs up to get to Eric.  When he gets there, Eric is bleeding.  Aaron carries him away to safety.

Rick continues his search for the guns and enters another room.  He sees a picture of a couple and studies it.  Someone comes in with a gun raised, he tells Rick to keep his hands down and to turn around.   Rick faces him and he says “Hi Rick.”  It’s Morales (Juan Gabriel Pareja) , one of the survivors who Rick met in Atlanta.  Morales says it’s over. He called the Saviors and they are coming. 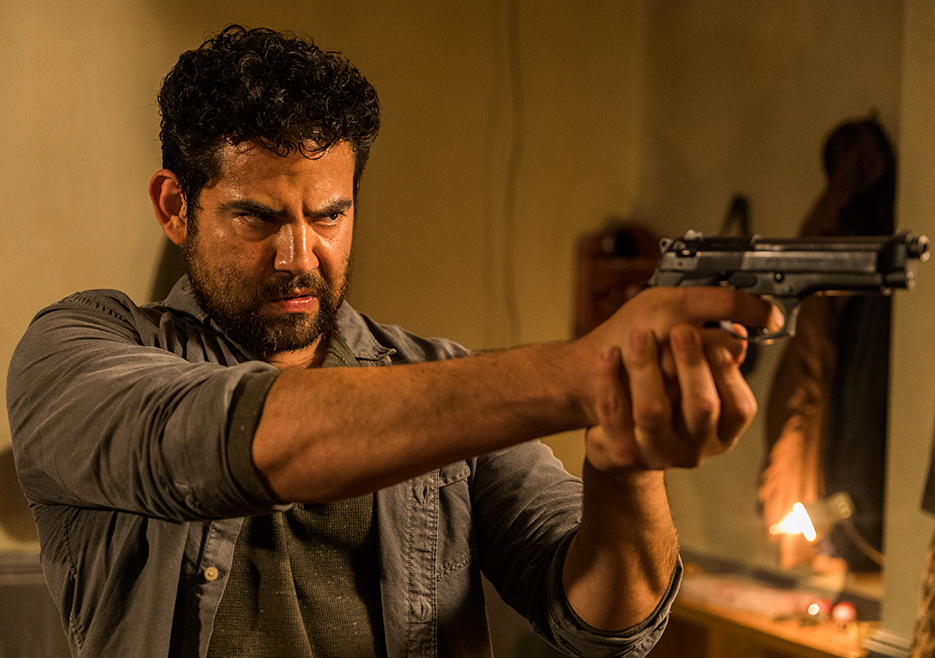 Juan Gabriel Pareja returns as Morales in The Walking Dead, “The Damned” amc.com

I’m shocked!  Morales is a game changer.  Why? Because he was one of the original survivors.  Rick knows him and knows he is a good man.  Morales gives the Saviors humanity.  If Rick thinks someone like Morales can turn bad, then who can Rick really trust.  I wonder if Rick will question his survival once he hears Morales’ story.  Can Negan really be all that bad if someone like Morales is following him?

The dissension amongst the three communities…it’s going to get much worse.  They are not on the same page. That is going to cause more casualties.  Tara was about to turn on Jesus. If the Saviors see that, they can use it.   It’s a weakness that needs to be fixed ASAP.

Tara may think that she is right to kill all of the Saviors and that Rick will listen to her, but…Rick found a child and Morales, he’s going to have a change of heart about some things.

Is Jesus right? Do they need to show that they are better than Negan? That the Saviors can live amongst the people they are fighting against?  Or will the Saviors use his kindness and turn on them?

They need to fix these flaws fast! They are already losing people!