The Walking Dead season 8 is definitely the most emotional roller coaster I’ve ever been on. There has been a lot of deaths since the season began.  Up until now, Alexandria, Hilltop, and the Kingdom have suffered minimal loss. That had to change at some time. In “Some Guy,” the fate of the Kingdom is uncertain. They thought they were safe after taking out a group of Saviors. Someone was in the compound and began shooting at the King. Who lived? Who died?

Read the Full Recap of THE WALKING DEAD, “Monsters”

King Ezekiel (Khary Peyton) prepares to leave for war. He watches as his subjects say goodbye to those who will accompany him. Before he leaves he address the community…

“We will leave our loved ones to traverse a dangerous road, rushing out of peace into war. And yet I smile. For we will find glory from the rock of struggle, this day. We will honor and protect this basket of life in the land of the dead. And we will win! You trust the King. We will win! I smile, I laugh, I rejoice, this day! For, on this day, we are joined in purpose and vision! We are of singular heart and mind! On this day, we are one! We are one!”

These are the last words that King Ezekiel said to the Kingdom before leading his people into war. 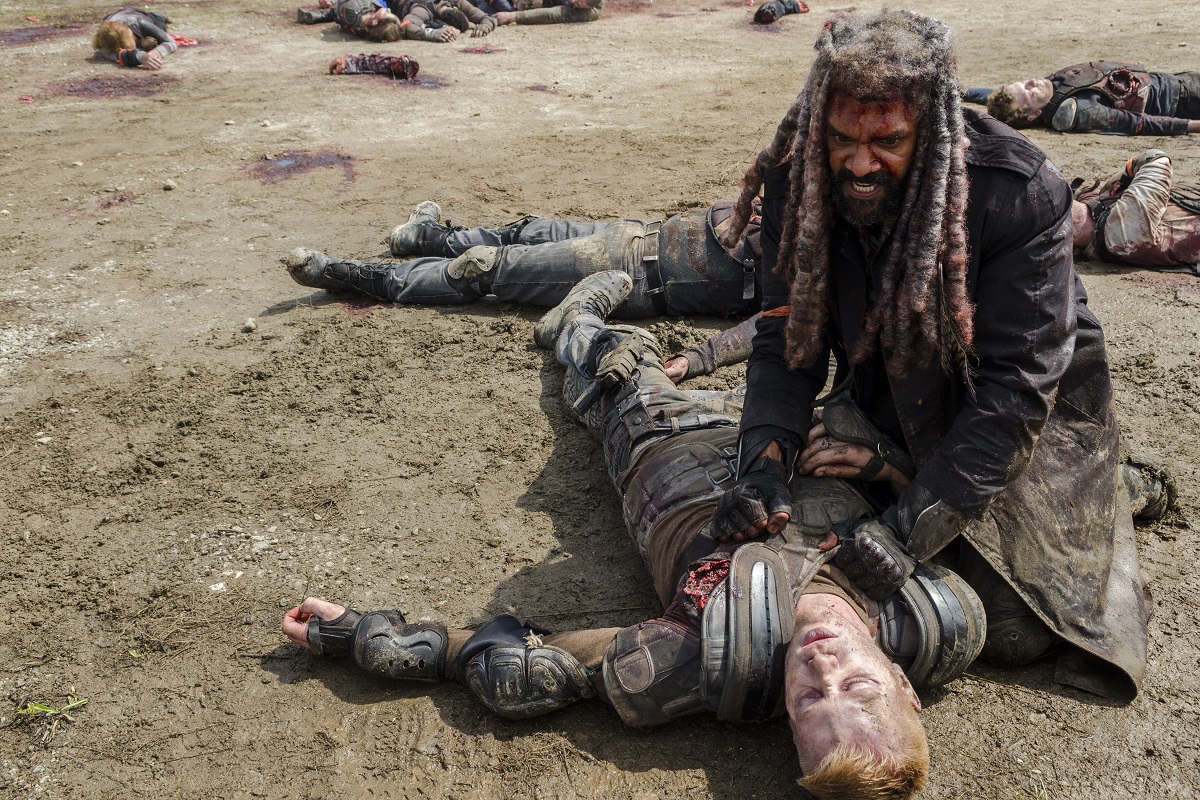 King Ezekiel is still surrounded by his loyal subjects…only  now they are dead. The Saviors set a trap for the Kingdomers. They have the guns that Rick has been looking for.  These are high powered weapons that have just destroyed the Kingdom’s army. The King crawls out from under the pile of men who did their best to protect him. He sees the death of his people and cries out for them all. Daniel (Daniel Newman) rises and walks toward Ezekiel. Ezekiel trips, but is able to get a gun. He starts to shoot Daniel, but he’s out of bullets. Luckily, Alvaro (Carlos Navarro) shows up and kills Walker Daniel. Alvaro helps The King get up and they make their way to safety. Or so they thought. A Savior comes from out of nowhere, kills Alvaro, and takes the King hostage.

Carol (Melissa McBride) went into the compound alone before the shooting started. She finds the guns as the Saviors put them away. Someone yells for the guys to hurry up. Carol is trapped between them and hides. Once they are all in the same room, Carol shoots them all.  But more Saviors arrive and see her. Carol runs and the Saviors let her go. They say the guns are more important.

So this guy…the creepy looking Savior…takes Ezekiel’s sword and leads him to the gates of the compound. He tells Ezekiel that he’s taking him to the Sanctuary. The Saviors were told to save the King, the Widow, and Rick (Andrew Lincoln). He starts taunting Ezekiel about his facade as a king. He tells Ezekiel that he made them follow him and now they are all dead. And they are still following him. Ezekiel falls multiple times. The dead are following them to  the gates. The Savior keeps them on step ahead of the walkers.

Carol follows the men to the truck and starts shooting at them. Ezekiel can hear the gunfire. Ezekiel attempts to hit the Savior and falls back.  The Savior wipes blood on Ezekiel’s face and says he has delusions of grandeur. When they reach the gate, it is locked. The kingdom walkers are surrounding. Ezekiel asks for his sword back, saying he will help fight them off. The Savior takes Ezekiel’s coat and throws it over the fence. His plan is to jump the fence and get a car. The two scuffle again and this time the Savior pulls the sword on Ezekiel. He wants to kill Ezekiel. Jerry (Cooper Andrews) comes from behind and slices the Savior in half with an axe.

Carol throws her gun at the Saviors and they stop shooting. She says she can tell them where the others are if they let her live. The Saviors tell her to come out slowly. She assures them that she is unarmed. Carol gets close enough to the Saviors to grab one and hold him with a knife.The others shoot and kill their guy to try and get Carol. She pushes a button that opens the gates and takes cover. Carol takes the keys off the Savior. The Saviors are too busy shooting at her to see the walkers coming up behind them. 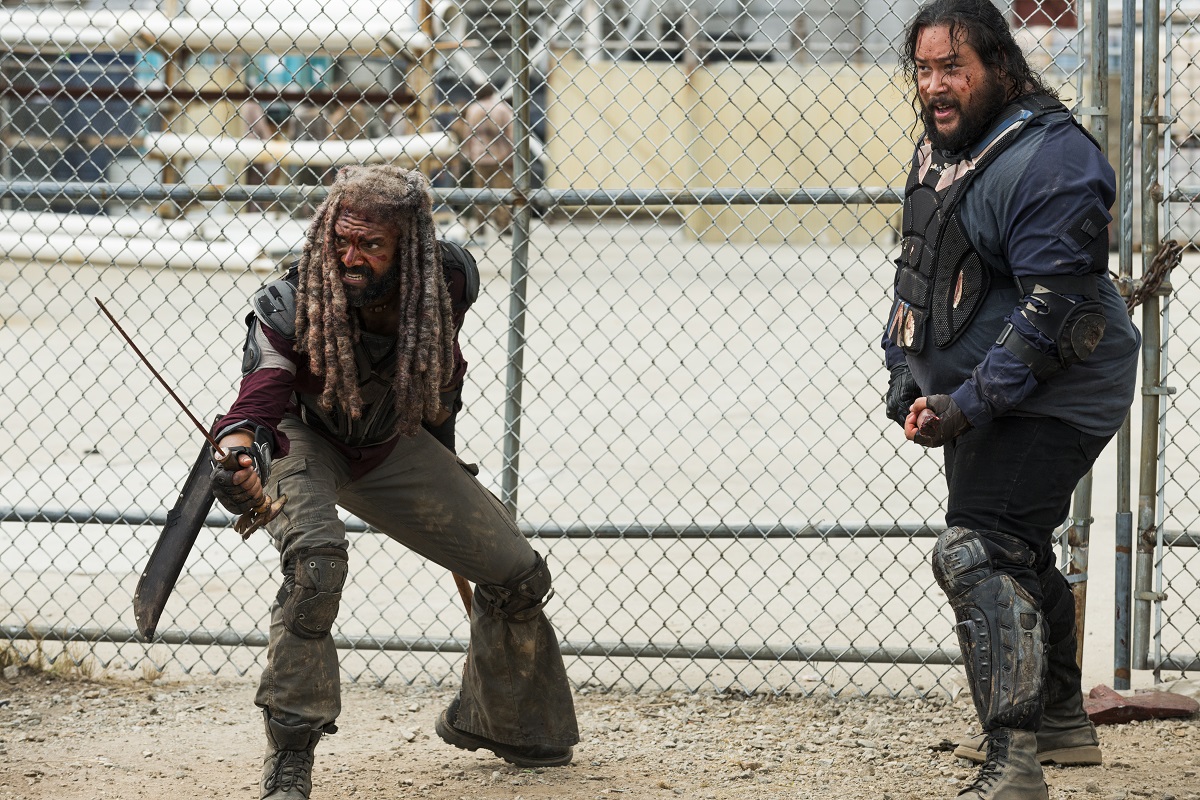 Jerry picks up Ezekiel. He takes his sword and fights off the approaching walkers. When Jerry returns he calls Ezekiel ‘your majesty.’  Ezekiel tells him not to call him that. Jerry attempts to break the lock on the gate. He breaks his axe instead. He turns to face the dead beside Ezekiel. This is where he thanks the King for being a ‘cool dude.’ Carol admits that she was lying about giving the Saviors information. She tells them to give up the guns and end this. The Saviors won’t budge. Carol slowly makes her way toward them and see Ezekiel and Jerry fighting a herd.

Carol asks Ezekiel about his training. He says he has trained for a long time. He’s ready to become what he must.  Carol asks if he’s that now. He tells her a story about his decision to save Shiva. In the moment he had to think quickly about who he wanted to be. He says Benjamin told him to be the hero when he is asked to be. Ezekiel asks Carol if she has always been brave and strong. She replies that decided she had to be and live decided some things for her too. 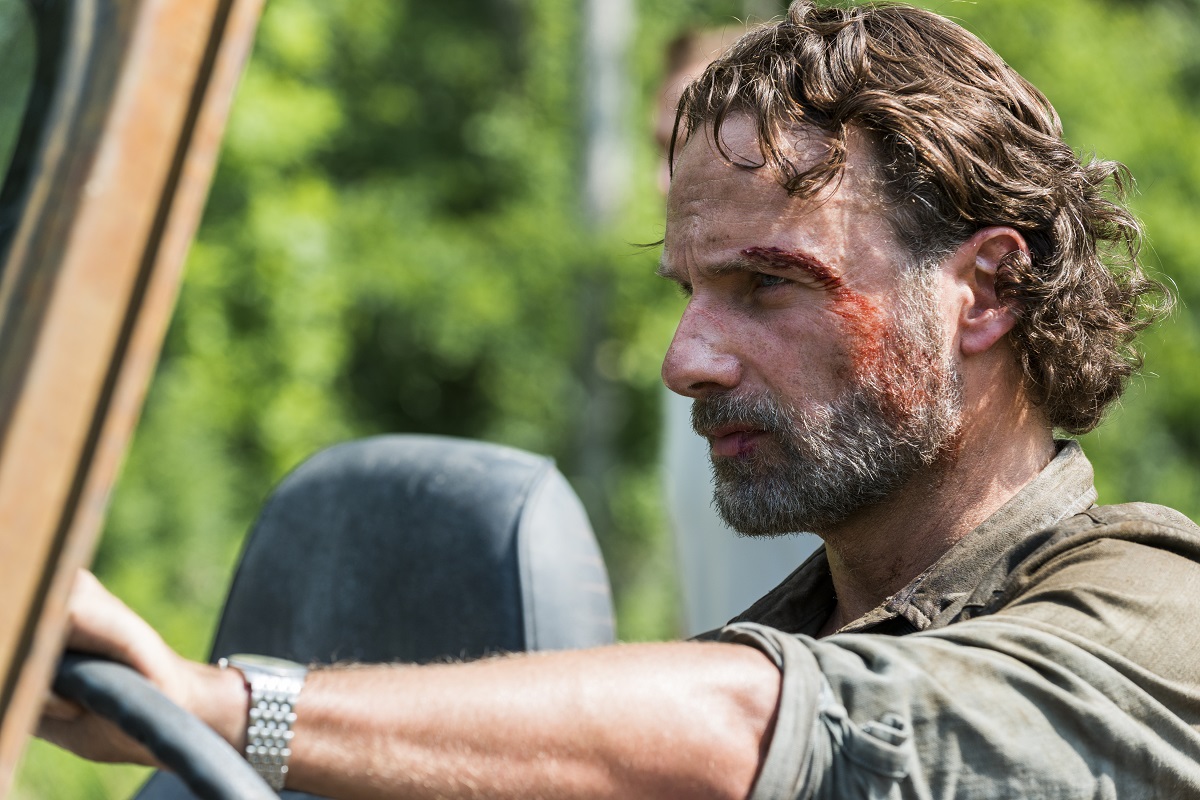 Daryl (Norman Reedus) and Rick are in pursuit of the truck. One of the Saviors opens up the tailgate and starts shooting at them. Daryl falls off his bike and Rick continues the pursuit. The truck starts to swerve to avoid hitting walkers in the road, causing the shooter to fall off balance. When he starts firing again, Rick swerves to the side and Daryl is right behind him. Daryl shoots the gunman. Rick pulls alongside and jumps into the truck. He stabs the driver, tosses him out of the truck, and drives into a railing. The truck tumbles down a hill. Daryl stops and check on the wreck. Rick is climbing up the hill and says, “we got the guns.”

Carol, Ezekiel, and Jerry are walking away from the herd of walkers. Ezekiel tells them to leave him. He says he is slowing them down. Carol won’t leave him behind. They come upon a sewer full of melting walkers. Jerry and Carol help Ezekiel get across, but they are slow. Walkers start descending upon them. Ezekiel says he will hold them off so Carol and Jerry can get to safety. Jerry, who continues to call Ezekiel ‘your majesty,’ says he won’t leave his King. Ezekiel gets angry and yells that he is not a king, he’s nothing. He’s just some guy.

Shiva jumps in the sewer and starts attacking the walkers, giving Carol and Jerry time to get Ezekiel out of there.  The walkers turn on Shiva, holding her down long enough to kill her in front of the king. Ezekiel wants to help her, but Jerry holds him back. RIP Shiva. Ezekiel, Carol and Jerry return to the Kingdom. The community rush to greet them, but then realize their loved one have perished.  Ezekiel looks at Henry and walks past the community members.

Even though you know it’s coming, you’re never quite prepared for these devastating losses. TWD is good at making you feel the loss as much as the characters.

Carol established her bad-a** status way back in Terminus. So we knew she would prevail over the Saviors.  It’s Jerry that really emerged as a strong character.  Up until now, he’s been the comic relief. Now we see that he’s warrior as well.

I feel so bad for Ezekiel. As confident as he appeared to be, he was never prepared to lose so many lives.  It was only a matter of time for Ezekiel to have to drop the king persona and get real about this war.  He’s good at pretending, but this war is all too real.

I’m pretty sure the writers tried to over play Daryl and Rick this season. I mean, in season 7 they were both broken and humiliated. They have to get their street cred back.  Of course, the same thing can easily happen to Rick.  He can easily lose just as Ezekiel did, so let’s not get too cocky.

They said the season would build on intensity. They aren’t lying.