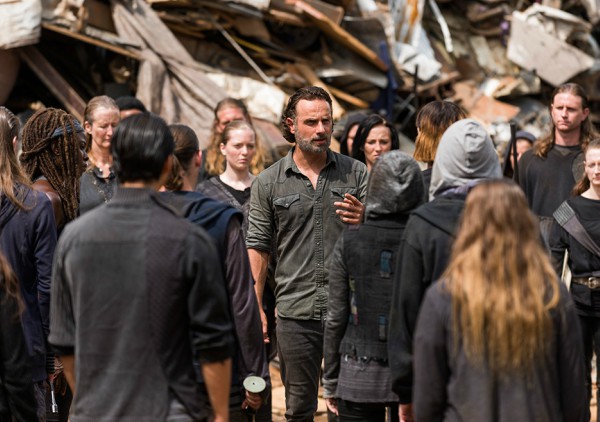 The Walking Dead Season 7 continues.  Last week Rick started looking for way to increase their army to stand up agains the Saviors.  They were able to recruit a few people from Hilltop, but the Kingdom turned them down.  At the end of the episode, Rick and the gang ran into a new group of…friends…

Morgan (Lennie James), Ezekiel (Khary Peyton) and the knights of the Kingdom, including Jerry await the Saviors.  The Saviors taunt the group, especially Richard (Karl Makinen).  Ezekiel gives in and instructs Richard to hand his gun to the Saviors.  Richard mouths off and causes a fight.  Morgan and Benjamin (Logan Miller) defend him, embarrassing the Savior and knocking him down. Gavin (Jayson Warner Smith), lead Savior tells Ezekiel that they cannot fight back. Things will get worse for them now.  Morgan asks for his staff back, but the Saviors take it anyway.

Ezekiel and his men return within the walls of the Kingdom.  Ezekiel tells Benjamin that he’s impresses with his fighting ability, but to think before he attacks anyone again. 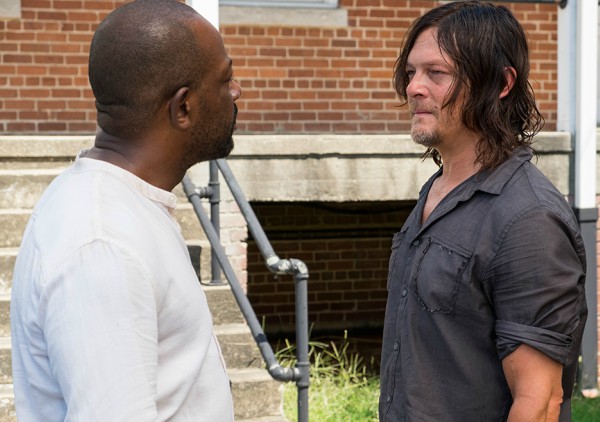 Daryl (Norman Reedus) shows up and asks where they went.  Morgan asks to speak to Daryl alone.  Daryl knows they went to meet the Saviors.  He tells Morgan that if Carol know what was going on, she’d lead them right to the Saviors. Daryl walks away from Morgan…disappointed.

Daryl sees Richard practicing his bow and arrow skills. They talk about wanting the same thing. Richard says they need Daryl’s help.  Richard shows Daryl his secret stash, that includes guns and explosives. He tells Daryl about the woman that Ezekiel cares for.  She lives on the outside of the Kingdom.  Richard wants to kill her so Ezekiel will see that they aren’t safe.  Daryl knows he’s talking about Carol.  Daryl tells Richard to stay away from her.  Richard starts to attack Ezekiel’s convoy that is headed to Carol.  Daryl stops him.  Richard tells Daryl that they need the Kingdom to stand up to the Saviors.  It’s the only way to get Ezekiel on board.  Daryl tells Richard that if anything happens to Carol, he will kill Richard. 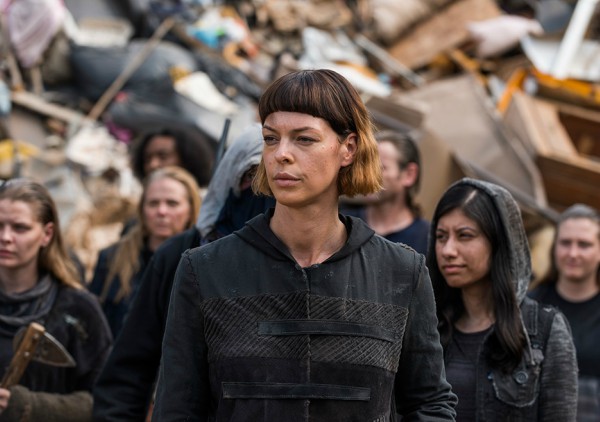 Elsewhere, in a junkyard, a group of people walk out of a door.  All of them are dressed in black.  Rick (Andrew Lincoln), Michonne (Danai Gurira), Aaron (Ross Marquand), Rosita (Christian Serratos), and Tara (Alanna Masterson) emerge with them.  This new emo group, The Scavengers surround the gang. One woman comes forth and asks for the leader.  She tells Rick that they own them.  Rick asks to have Gabriel (Seth Gilliam) back first.  They bring him out and Rick knows that Gabriel did not betray them. 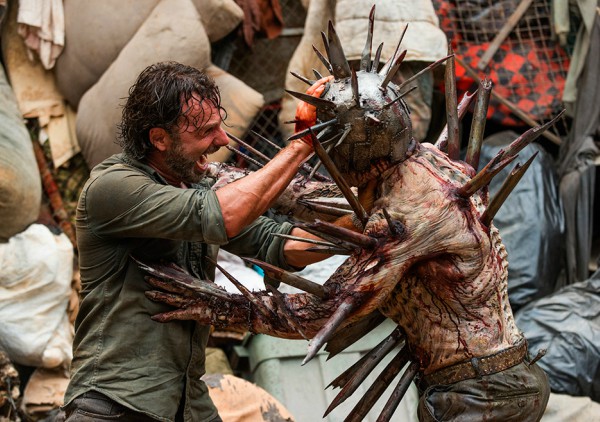 They take Rick to the top of a pile and then push him into a pit.  Inside the pit is a walker with lots of knives in it.  Rick uses the wall of trash to stop the walker. He finds a shard of glass and kills it. 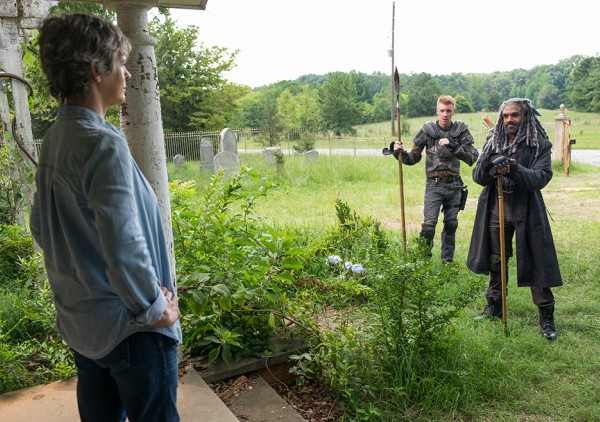 Ezekiel, Jerry, and others visit Carol (Melissa McBride) to check on her. She tells them to leave her alone. Jerry gives her cobbler and they leave. Carol gets another visitor. It’s Daryl.  She’s happy to see him.  He asks her why she left. She says she just had to.

Back at the junkyard. Gabriel explains what happened. The Scavengers had been waiting for someone to come along and get the supplies from the boathouse. The Saviors took most of what was on the boat so they were upset.  The Scavenger made Gabriel pack up everything they had and leave.  He asked Rick why he was smiling.  Rick says that someone taught him that enemies can become friends.

They got the supplies back from the pantry. Rosita is ready to out and find guns for the emo group. Tara tells her that they are sticking together. They are going to regroup then find the guns.  Rosita tells her to grow up. 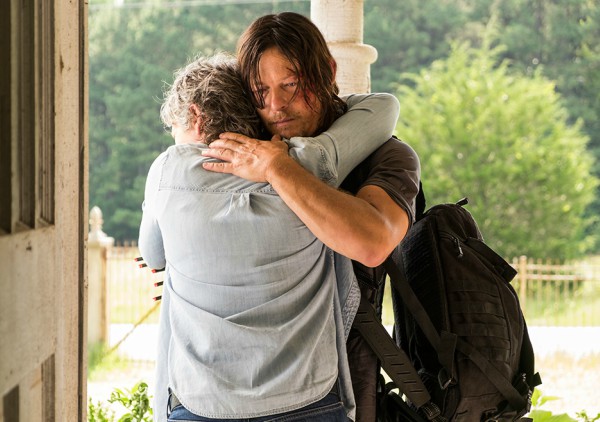 She asks if the Saviors came to Alexandria and if anyone got hurt or killed.  Daryl tells her that the Saviors came. They made a deal like Ezekiel and everyone is alright.  Carol is relieved.  Daryl asks if Ezekiel is okay.  Carol says he is.  Daryl leaves Carol in peace.

At the Kingdom, Daryl is hanging out with Shiva. Morgan finds him and knows that Daryl found Carol.  Daryl wants to focus on getting the Kingdom to help Alexandria and says he needs Morgan to help.  Morgan won’t do it.  Daryl says that whatever Morgan is holding onto is already gone.  Morgan says Daryl is the same as him.  He knows Daryl didn’t tell Carol what really happened with the Saviors; otherwise Carol would be there. They are all holding on to something.

Daryl leaves the Kingdom for Hilltop.  Morgan and Richard watch him go.

(All Photos Courtesy of AMC.com)

Morgan is so weak…I understand his value of life, but ….he’s just weak.  They are trying to find a way to survive freely.  They don’t want to be under Negan’s rule.  It’s not good for anyone to have to live that way.  The Saviors are bullies. There no telling what will set them off.

Sooooo good to see Daryl holding a crossbow again!  I literally cried when Daryl and Carol were reunited.  I hate that Daryl lied to her. We all know that Carol would have joined the fight as soon as she heard about Glenn.  But…I understand. Carol needs to come back on her own terms.  If she had fought now, she would be a different person afterward.  And could have become someone that she didn’t recognize anymore.  Morgan was right, they are all holding on to something that keeps them from losing who they truly are.

Richard is so desperate.  Good thing Daryl is there to set him straight.  You don’t mess with Carol.

What is up with the emo people? The Scavengers…Did they forget how to talk?

Something bad is about to happen to Rosita…she’s out of control.  She’s already made one bad mistake and Eugene had to pay for it.  Either Rosita will die next or someone she loves…like Tara…could play for another one of Rosita’s mistakes.

Next week, we get to see the fall out at the Sanctuary.