THE STRAIN Recap (S04E05) Belly of the Beast

The Master’s plan for humanity is unraveling on The Strain.  Dr. Goodweather creeps closer and closer to the truth.  Dutch has already figured it out.  Can the two fighters stop the Master from destroying the world?

Fet and Quinlan have been racing against a strigoi convoy to obtain a nuclear warhead.  They thought they had gotten ahead of the munchers.  They know they are close.

We’re halfway through the final season.  Will we finally get to see what happened to Abraham Setrakian? What is it about B-Positive blood that the strigoi like the most?  And what are they doing with the B-positive babies they are breeding in New York?

CATCH UP ON RECAPS FROM THE FINAL SEASON OF THE STRAIN

Ephraim (Corey Stoll) and Alex (Angel Parker) make their way to rural Pennsylvania towards the New Horizons community.  Their car breaks down and they have to find shelter.  They make their way to a small, abandoned town. 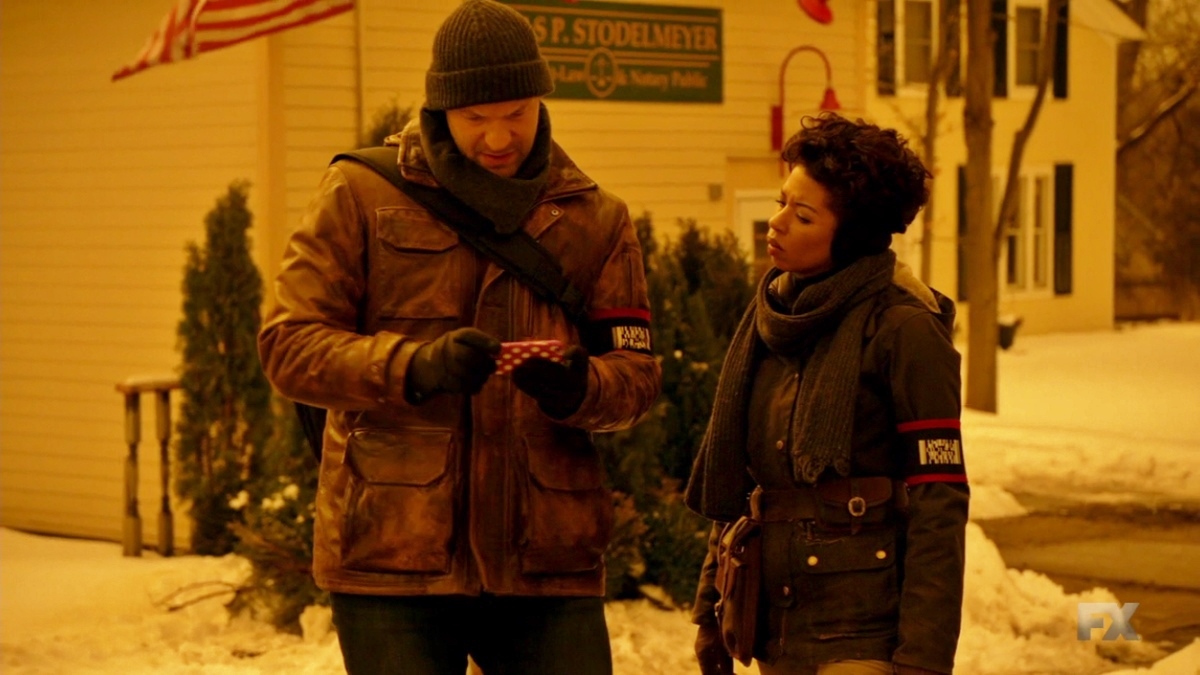 Corey Stoll as Ephraim Goodweather and Angel Parker as Alex Green on The Strain, Belly of the Beast, fxnetworks.com

They find a cell phone that belonged to a young girl named Emily (Ava Preston).  Emily says she doesn’t plan on going to New Horizons.  She has made a hideout in her room with lots of tuna and peanut butter.  They are able to find Emily’s house and it is empty.   They decide to stay in Emily’s house for the night.

While looking at the stars in Emily’s room, the two continue to bond over what could have been.  They hear a noise downstairs and go to investigate. They meet another woman with a shotgun.  Her name is Francis (Tonya Pinkins).

Eph calms her down and she tells them that she escaped from New Horizons when she found out what it really was.  And to make it worse, Francis has been bitten by a strigoi and is turning.  Eph asks her to take him to New Horizons so they can figure out what the Master is up to and stop him.  Francis agrees.

They get to a road that leads to New Horizons and find all of the luggage of the people who agreed to go.  Francis is getting worse. She says she doesn’t want to see anymore.

Eph says he can’t let her go in that state. She will turn and she will start to kill.  Alex convinces him to let Francis live her last moments her way.

Alex and Eph continue towards New Horizons and Francis follows them anyway.  Francis begins to talk to them. It’s the Master. He says he knew Eph would resurface.
The Master asks if Eph wants to know how Zach (Max Charles) is doing. Eph is happy to hear that Zach is still alive.  The Master says Zach is apt student and calls Eph a coward for fleeing New York.

Eph shoots Francis in the head.  The Master knows exactly where Eph is now!

The strigoi have a new creature called mongrels with them.  Apparently the mongrels are worse than the strigoi.

Fet comes up with a plan to ambush the convoy, steal the pit and take out the strigoi and crew.  The guys helping Fet aren’t too excited about the plan. Charlotte tells them they can have all of the silver on the convoy. The random guys are in.

Charlotte turns to Quinlan and gives him fresh blood. He is very appreciative of her donation and starts to remember something. 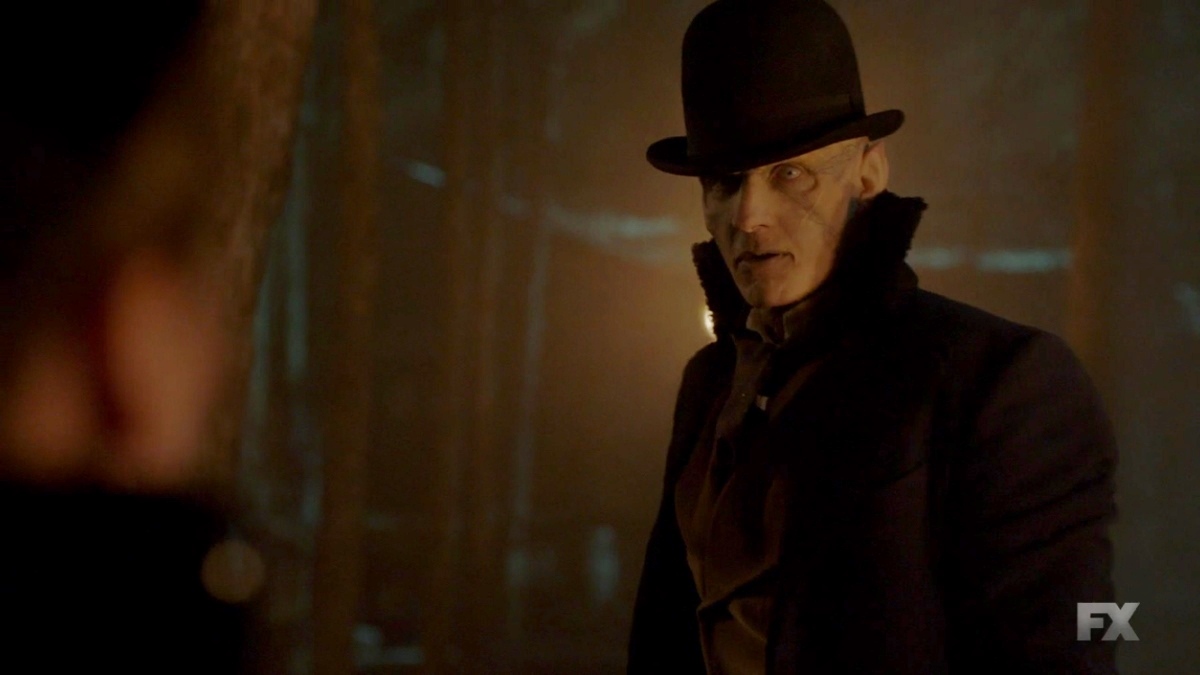 Rupert Penry-Jones as Mr. Quinlan on The Strain, Belly of the Beast, fxnetworks.com

A young woman named Louisa (Hanna New) is looking Quinlan. She wants him to bite her twin brother and make him immortal.  Quinlan visits the man and he’s in bad shape.

As time goes on, Quinlan has moved in with the family and has grown…close…with Louisa. Louisa is a makeup artist for the theater. She asks him to let her make up his face.  She is obviously attracted to Quinlan and asks him to bite her…so she can feel his sting.  In a very sexual, but really creepy scene, Quinlan feeds from Louisa’s thigh.

The next scene, they are at her brother’s funeral. Quinlan is still in make up and getting strange looks. Louisa’s daughter calms him by holding Quinlan’s hand.

After the funeral, the priest finds an odd box with some strange soil.  He turns around to find the Master standing over him. The Master strikes at the priest, killing him.

Dutch (Ruta Gedmintas) is taken to the basement where she meets Eichorst (Richard Sammel). He has set up a dinner for her, but Dutch is not interested.  She says they won and asks him why he is still hiding behind the makeup.  Eichorst says he’s special because the Master gave him freewill.

Eichorst asks for the whereabouts of Abraham Setrakian (David Bradley). Dutch says his minions separate them. He’s probably dead by now. She laughs because she knows Eichorst wanted to torture Setrakian before he dies.

Eichorst gets anxious and drags Dutch to Desai’s (Cas Anvar) office. He asks for a  list of men who fit Setrakian’s description. Desai finds one man fitting the description and he’s in the building! Eichorst says he needs to verify this man’s identity before they kill Dutch. 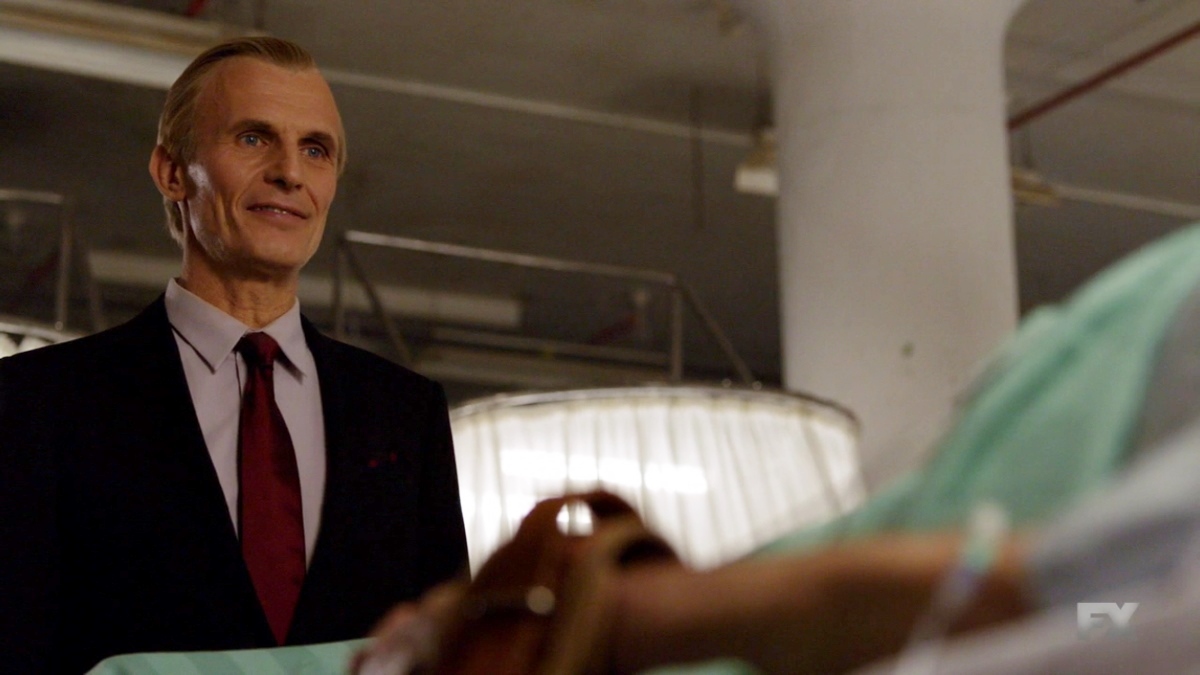 Richard Sammel as Thomas Eichorst on The Strain, Belly of the Beast, fxnetworks.com

Eichorst rushes downstairs and finds an unconscious Setrakian. He is a subject in the B-Positive bone marrow research.  Eichorst orders the doctors to wake him up.  He gloats over Setrakian, calling him by his concentration camp number.

Setrakian tells Eichorst to let him die.  Eichorst says he needs Setrakian to do something for them.  And then he will be allowed to pass.  All he asks is for Setrakian to admit that his God does not exist.

Setrakian says he will do nothing for him. He will see Eichorst in hell. Eichorst says he’s already there.

The alarms go off in the building and Eichorst rushes to see what’s going on. After he leaves, Dutch finds Setrakian and cuts away his bonds.  She also grabbed a bottle of alcohol and a taser.

Eichorst returns and catches them trying to escape. Dutch uses the taser to light a up a towel stuffed into the alcohol. The spark causes a fire and she throws the bottle at Eichorst’s feet, setting him on fire.   Dutch quickly wheels Setrakian out of the facility as two guards put out Eichorst’s fire.

Quinlan stands in the middle of the highway waiting for the strigoi convoy. The driver of the lead SUV says to run him over. Quinlan uses his quick moves and his sword to slash the tires of the SUV.  He jumps on top of the 18-wheeler and fights a strigoi mongrel.  The fight ends when Quinlan lays down on top of the trailer.  The mongrel looks at him funny and is split in two then they  pass a phone or electricity wire.  Quinlan throws the driver out of the truck and slams on the brakes, stopping the SUV that follows.

Fet and the others show up, take out the remaining men and strigoi. A mongrel jumps at Fet and Quinlan arrives in time to kill it.

The random guys check out the cargo and they don’t see any silver. Fet admits they lied about the silver.  The guys are angry and pull their guns on Fet and the gang.

Their leader starts talking about how they are going to turn them in and let the Partnership have them. A strigoi lunges at that guy, killing him…he was talking way too much.  Quinlan kills that strigoi too.  The other guys run away.

Fet and Roman secure the pit, but Quinlan reminds them that “nothing matters until the Master is destroyed.”

Eph and Alex continue toward New Horizons and they find what looks like a prison camp.  And that’s the Master’s final solution.  Eph says, “We’re not the farmers. We’re the livestock.”

Finally, Dutch has escaped the breeding home, with Setrakian. It’s episode 5 and this is the first time we’ve seen Setrakian, other than in flashbacks.  To be honest, I feel like they took too long to find him.  And they are taking too long to get the gang back together.

Why are they now touching on Quinlan’s back story. We’ve gotten bits and pieces in  past seasons, but I really feel like we don’t really know him.  They should have…I don’t know…devoted a whole episode to his backstory instead of giving us little by little throughout the series.  I mean, come on! It’s the fifth episode of 10 of the final season!

There are 5 episodes left and lot of ground to cover.  I hope they don’t rush things through and forget to cover something or make something less important than it should have been.  That happens why too often and the audience is disappointed in the ending.  Don’t disappoint me FX!

Ok, things are picking up.  Eph knows Zach is alive. So hopefully he’s headed back to New York soon.

Fet and Quinlan have their weapon, they just have to get in close to the Master to work.

Dutch and Setrakian escaped. Maybe they will hook back up with Gus and his gang.

My only concern now is, will everyone make it out alive in the end?