THE STRAIN Re-watch continues after Ephraim Goodweather and his CDC team discovered a new virus that has killed 206 passengers on plane from Berlin. There are four survivors who seem fine.  The team have quarantined the survivors to try to find out why they were spared.  Ephraim and Nora found a parasite that could be the cause of the virus.  And a mysterious being makes it way to Manhattan to be delivered to loyal followers Eichorst and Palmer.

Something wicked this way comes…

Gus Elizalde (Miguel Gomez) makes it across the bridge with the coffin.  He looks at the coffin and it starts to shake.  Gus runs away.

The official word is that carbon monoxide poisoning is what caused 206 people to die and the reason four people were able to survive.  All four of the survivors say they feel fine.  Eph doesn’t care. He is keeping them under quarantine.  Joan Luss says she will have his job if he doesn’t let them leave.  Nora tells her to start dialing.

At Stoneheart, Thomas Eichorst (Richard Sammel) is concerned that the CDC hasn’t released the survivors.  Eldritch Palmer (Jonathan Hyde) says he will have everything under control soon. Palmer is anxious to meet ‘him.’

At the jail, Abraham Setrakian (David Bradley) is allowed to see his ‘lawyer,’ Eichorst.  Eichorst calls him by his concentration camp number.  Setrakian asks if the coffin crossed the river. Yes.  He asks where the Master is now.  Eichorst says the Master is watching through him. 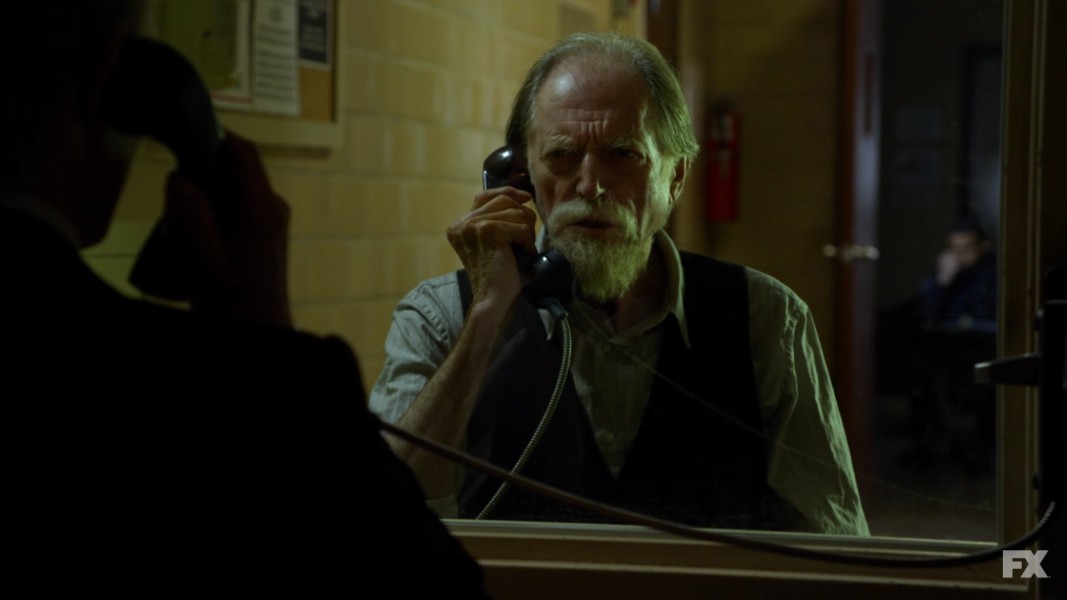 Eichorst is amused that Setrakian is still after his Master.  He tells Setrakian that he cannot win.  And there is no God to help him.  Eichorst taunts Setrakian with a story of a woman who cried out for Setrakian.  He asks if Setrakian regrets not being able to save her.

Setrakian says he will avenge her.  Eichorst reminds him that he’s not a hero, he’s just a number.  Eichorst says it’s good that Setrakian is in jail.  It’s the only place he can be safe.  He tells Setrakian to sit back and watch it all unfold.

Gus makes it home to find his brother Crispin (Francis Capra) on the couch.  Their mother, Guadalupe (Adriana Barraza) is head to mass. She shows Gus the gift that Crispin gave to her. A really nice radio/clock. Gus knows he stole it.

Guadalupe leaves for mass.  Gus yells at Crispin for stealing the radio and asks where he got it. Crispin stole it from Setrakian’s pawn shop.  Gus takes it and leaves.

Eph and Nora berate Barnes for allowing the survivors to go home. Barnes introduces them to Margaret Pierson (Maria Ricossa).  She tells them they have sufficient evidence that the cause of death of 206 passengers was carbon monoxide poisoning.

Ephraim doesn’t accept it. He says all of his findings point to a biological virus.  Ms. Pierson tells him that if they say it’s a medical quarantine, that would halt all exports. It’s not worth crashing the economy.

Barnes accuses Eph of letting his personal life affect his work. Eph gets angry and grabs Barnes. He tells Barnes that his personal life has nothing to do with it.  Nora stops Eph and he apologizes.  Barnes pulls Eph off of the case and considers it no longer a CDC matter. He tells Eph to take some time off and then they will evaluate his job.

Eph and Nora meet with the pilot Doyle Redfern.  He remembers the box in the cargo hold.  He says it showed up at the last minute, but he didn’t think anything of it. The men who delivered it were in suits and looked official so he didn’t question them.

Redfern is upset that the authorities are covering up what really happened.  He’s sure it wasn’t carbon monoxide poisoning.  He says everyone’s first priority is protecting themselves.

Nora notices that Redfern is really pale.  He says he has a headache and can hear a ringing in his ears.  Eph tell Redfern to go see a doctor friend.  He will run tests and find out what’s causing the ringing and headaches.

Eph and Nora study the worm they found on the plane.  The worm responds strongly to human blood.

Zach (Ben Hyland) messages Eph. He wants to talk about the custody case.  Nora convinces Eph to go.  He kisses Nora before he leaves.

Meet Vasiliy Fet (Kevin Durand), an inspector for NYC Pest Control.  He is inspecting a restaurant in Manhattan.  The chef is angry that he’s there and tries to pay him to leave.  Fet won’t go.

Luss and Bolivar are at the same restaurant. They discuss their lawsuit against the airline.  Ruby Wain (Regina King), Bolivar’s manager is happy about the situation. She says Bolivar’s tickets sales are up.  Bolivar and Luss both hear the humming noise. They say it’s like an echo of a voice. 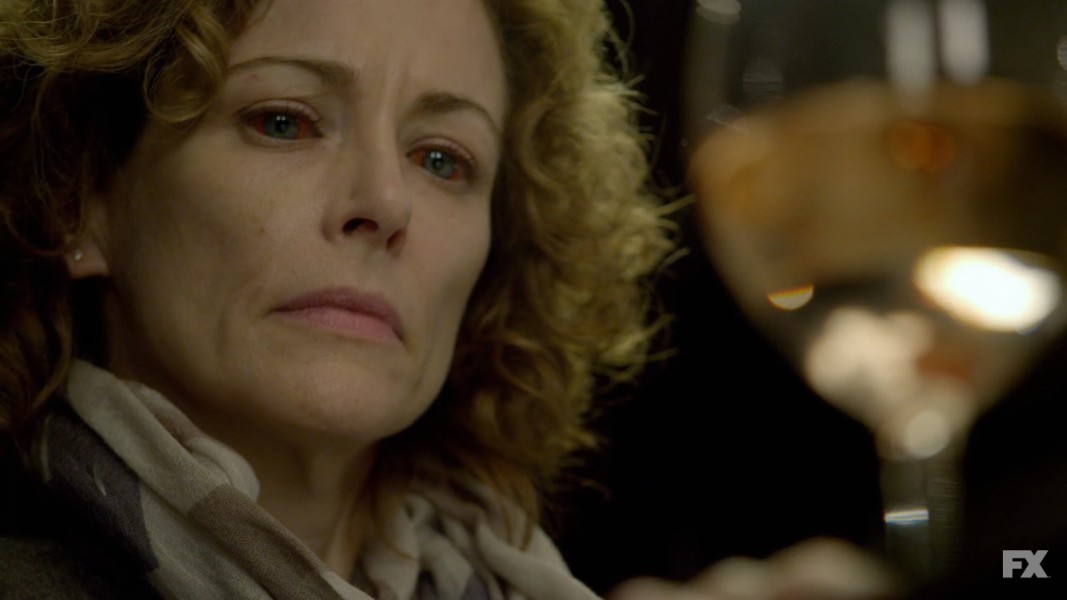 Bolivar invites Joan to go out to party with him.  She says she has to go home.  She takes a drink of water and blood is floating in the glass.  She checks her mouth and she is bleeding from her mouth.

Fet finds what he’s looking for.  He tells the kitchen staff to start cleaning.  Fet goes into the restaurant and tells everyone to leave.  He shows a patron a dead rat and the restaurant clears out.

Reggie Fitzwilliam (Roger Cross) tells Palmer that the doctors have found a new liver for him.  Palmer says he doesn’t need it.  Fitzwilliams tells him this may be his last chance.  Palmer agrees to see the doctors.  He is more excited about his meeting.

Eph is on the phone with Nora when he gets to Kelly’s (Natalie Brown) house.  Redfern’s temperature is 102 and rising.  He gets off the phone to see Zach.  Matt Sayles (Drew Nelson) and Kelly are turning his old office into a game room.  Zach is helping Matt with the reconstruction.  Matt and Eph come to an understanding about Kelly and Zach’s happiness.

Eph asks Zach what he’s going to tell the judge at the custody hearing.  Zach says he will say what is in his heart.  Eph is going to ask for joint custody.  Zach says he would like that but Eph is always so busy with his job. Eph says this time’s for real.

Bolivar invites girls to his apartment.  In the middle of their love making activities, Bolivar starts looking at their necks. He bites one of the girls, making her bleed.  She pushes him off and the girls leave.  Bolivar licks up the blood off his fingers and the floor.

Eph meets Nora at the hospital.  They have admitted Redfern. His temperature is high. They examine him with a UV light and see the worms crawling within him.  Eph tells Jim to inform Barnes of Redfern’s condition and round up the other survivors and anyone they had contact with.

Nora calls the medical examiner’s office and there is no answer.  They head to the morgue to get the results of the  autopsies.

In the car, Gary Arnot (Steven McCarthy) calls Eph to thank him for returning his daughter.  Eph is confused.  He asks if someone released her body to him.  Mr. Arnor says his daughter is at home and she’s safe.  He hangs up the phone.

Nora begins to question if there could be more survivors.  She says when the entered the plane everyone seemed dead, then four of them woke up.  Could the worms have put the passengers in some sort of state of hibernation?

Palmer and Fitzwilliams go to the garage where Gus dropped off the van.  Fitzwilliams continues to warn Palmer about Eichorst and what he is offering Palmer.  Palmer says these people have great power that they both can benefit from.  He tells Fitzwilliams to stay in the car. 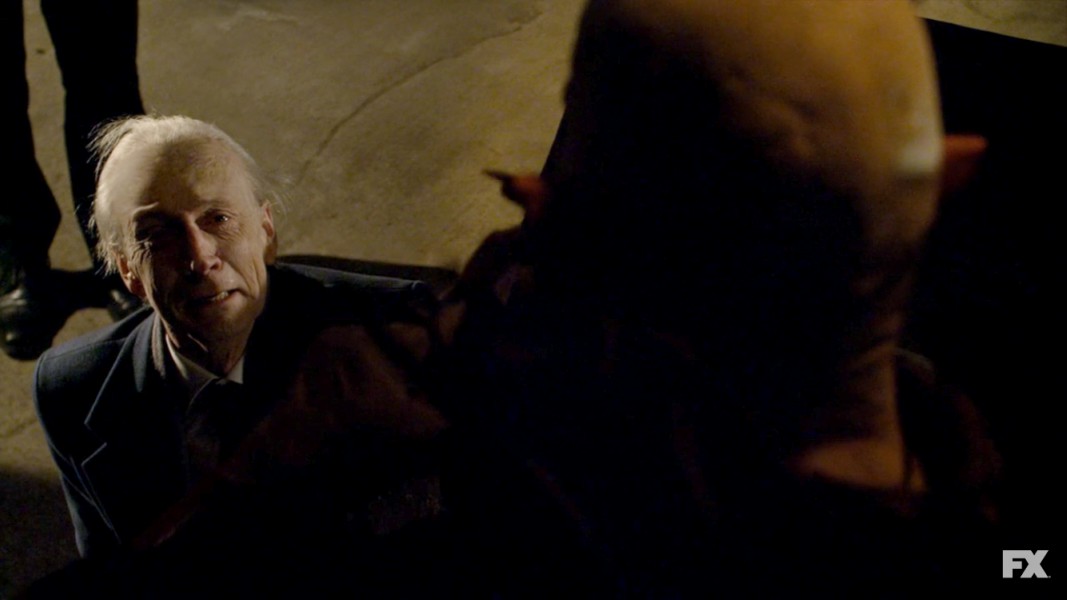 Palmer walks toward the coffin.  It is open.  He touches the soil.  Eichorst appears.  He tells Palmer he is very fortunate.  The Master (Robin Atkin Downes) appears and Palmer kneels before him.  Palmer is the one who brought the Master to NYC.  The Master tells Palmer to look at him. Palmer is afraid and starts to cry.

Eph and Nora arrive at the medical examiner’s office. The phone is off the hook and the place is in shambles.  They enter the examining room, but the power is off.  All of the bodies are gone.

At the Arnot house, Emma (Isabelle Nelisse) sits in a cold bath.  Gary tells her it’s time to get out.  She won’t talk to him.  He asks her if she’s hungry. She says yes.  He goes to get a towel. When he returns, Emma lunges at him and feeds on him.