Zombies, robots, and viral plagues are common themes of the apocalypse. What about vampires? FX’s THE STRAIN is based on the vampire horror novel written by Guillermo Del Toro and Chuck Logan.

A viral outbreak leads a CDC team to investigate a plane full of infected and dead passengers.  Survivors have strange symptoms that only get worse.  The CDC determines that the virus is vampirism and these vampires don’t sparkle.

Dr. Ephraim “Eph” Goodweather (Corey Stoll) leads the team made up of Dr. Nora Martinez (Mia Maestro) and Jim Kent (Sean Astin).  Together they set out to stop the spread of the vampire virus with help from pawn shop owner Abraham Setrakian (David Bradley).   Setrakian has seen this type of outbreak before. At the same time, Eph is trying to keep his family together despite the fact that his wife, Kelly (Natalie Brown) has moved on.

It all starts on February 8: Night Zero

A plane from Berlin approaches New York City.  A flight attendant discovers something frightening in the cargo hold. When the plane lands, the control tower discovers it landed in a service area. Peter Bishop (Andrew Divoff) investigates.  The plane is cold and all but one of the window shades are down.  Bishop calls in emergency services, including the CDC.

Ephraim Goodweather meets up with his son Zach (Ben Hyland) and wife Kelly at a family counseling office. Kelly tells Eph that she wants to end their marriage.  She already has a new boyfriend, Matt Sayles (Drew Nelson). Eph is called away before anything can be resolved. 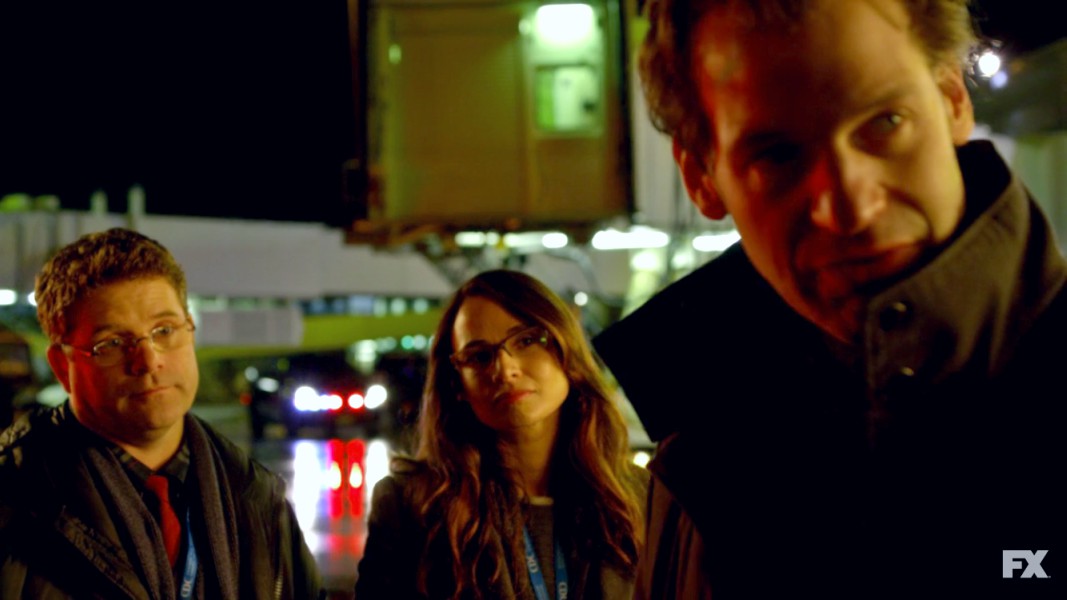 Eph meets his team, Nora and Jim at the airport. Everyone believes all of the passengers are dead. The Homeland Security team sees no reason to have the CDC investigate. They don’t believe the passengers were affected by anything viral.  Ephraim explains to them how a virus turns into a plague. The CDC will go in first.

Abraham Setrakian hears about the plane on the news.  The plane came from Berlin.  Setrakian knows what caused this strange occurrence.  He goes to a secret room to prepare. He says he must succeed this time.

Setrakian sits next to a beating heart in a jar.  He feeds his blood to the heart.  The heart has worm like things coming out of it to feed on the blood.

Eph and Nora prepare to enter the plane.  Eph tells Nora about his meeting with Kelly.  She has already filed for divorce.  Nora asks if Eph told Kelly about their affair. Eph says there is no reason to tell her now.

The team enters the plane and find the passengers are dead. There is no sign of violence.  There is some sort of strange splatter all over the plane that can only be seen under UV light.  It is biological. Nora takes samples.

Eph head to the rear of the plane where the cargo hold door is busted open.  Nora enters the cockpit and finds one of the pilots alive.  She turns around and two passengers are looking at her. One of them tells her to turn off her flashlight.  Ephraim rushes to help her and a passenger grabs him, asking for help.  They call the paramedics for the survivors.

Eichorst tells Palmer that his cargo has arrived and there are survivors.  Palmer knows there is no going back now.   Palmer says he can’t get used to Eichorst breathing.  Eichorst says he misses breathing sometimes.  Eichorst is not human.

Eph and Nora update Dr. Everett Barnes (Daniel Kash) on the status of the bodies and the survivors.   Eph says they are going to quarantine the survivors.  Nora says that they don’t know what caused this outbreak or if the survivors are contagious.  There is to be no press involved.

Eph, Nora, Jim and Bishop look at the manifest from the plane. There is a tall box with strange carvings in it.  Eph opens it and finds soil.  Nora discovers a latch on the inside of the box.  Eph tells Bishop to call Berlin to find out who loaded the box onto the plane.

Bishop is on the phone with Berlin.  He hears a high pitch hum and looks around the airport warehouse for the origin.  He finds a heap of cloth. It moves and attacks Bishop. The monster injects a parasite into Bishop and kills him.   The Monster leaves the warehouse. 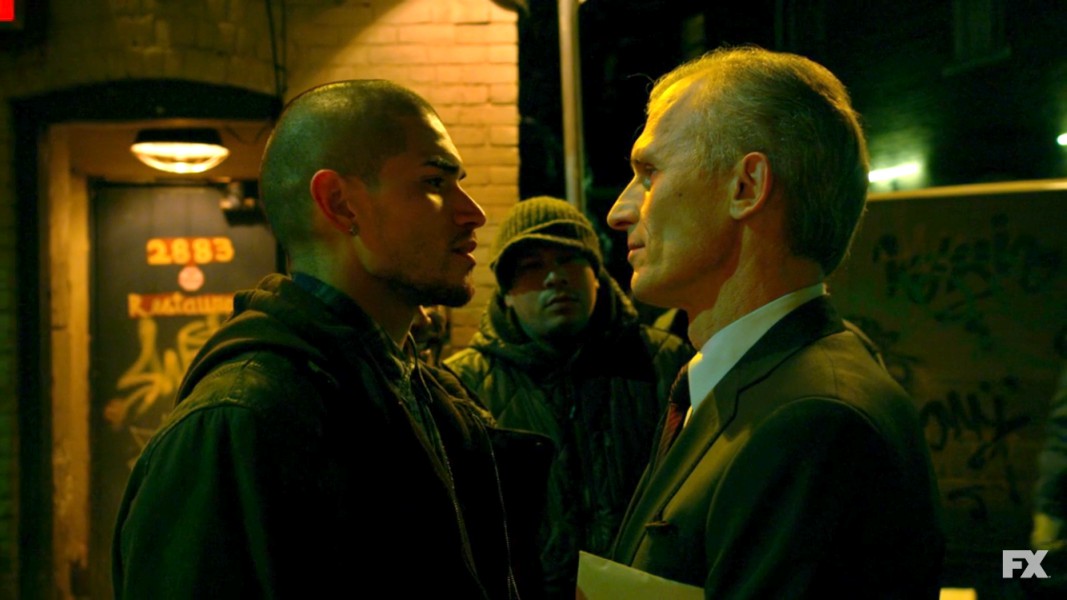 In Harlem, Gus Elizalde (Miguel Gomez) is approached by Eichorst.  Eichorst is paying Gus to pick up a truck from the airport.  When Gus finishes the job, his mother’s immigration status will change. And Eichorst will erase his brother’s criminal record. Gus says this is his last job. He wants to help his mother.

Eichorst tells Gus the three rules he must follow: Do not examine the cargo; Make no stops; Cross the bridge before daybreak.

Setrakian arrives at JFK to see a crowd of people waiting to see survivors of the plane from Berlin. He see Jim talking to security.  Security turns him away.  They leave him to deal with the rest of the mob.  Setrakian pretends to be ill to get Jim’s attention.  Jim falls for it and Setrakian tells Jim that he needs to speak to someone in charge.

Dr. Barnes gives Eph words of encouragement before he meets the families of the passengers. The press are there as well.  Ephraim starts to read his statement and press begin to ask questions.

Ephraim is honest with them. He announces that 206 passengers died.  And there are four survivors.  He says he is doing everything he can to find out what what caused their deaths.  One of the fathers of the passengers Gary Arnot (Steven McCarthy), hits Eph.  He wants to see his daughter.  Eph says to give him 48 hours.  The press and the families erupt with questions as Ephraim leaves.

Eph and Nora video chat with the medical examiner. The ME shows them an incision on the throat of one of the passengers.  It is a deep, precise and clean cut.  And the passengers have no blood.

The ME examines a body under UV light and sees several strange things happening to the body. 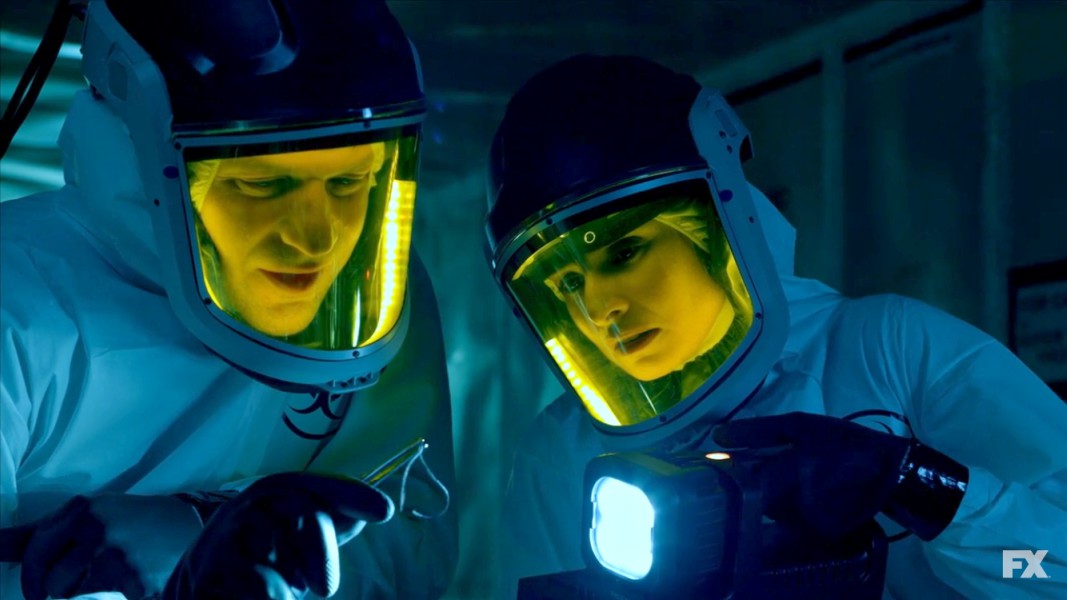 Eph and Nora find a small worm like specimen on the plane.  They take it for examination.   Eph determines that what killed the passengers is not airborne, but is some sort of parasite.   Nora finds soil near the specimen. They go to find the coffin and it’s gone.

Eph and Nora ask to see the security footage.  They see someone swoop in and take the coffin.  Eph says the footage was just a few minutes ago so the coffin should still be at the airport.

Meanwhile, Gus finds the van that he’s supposed to steal. The coffin is inside.

Eph calls Jim.  He tells Jim to have security to stop all trucks and large vehicles.

Gus is stopped.  He pulls out a gun. A dog sniffs the van and starts barking.  Gus gives the cop a card.  The cop shows Jim. Jim says the vehicle is one of the CDC’s and to let Gus leave. Before he goes, Jim instructs Gus to tell his boss that he is done.

The ME opens up one of the bodies.  There are specimens in the organs.  There is also a growth on the heart.  The examiner puts the heart in a scale.  He hears glass shatter.  He turns to see if anyone is behind him.  The examiner is distracted by the scale moving.  He picks up the heart out of the scale.  The worms get out and enter his wrist.   He is able to extract the worm.  The examiner turns around and the passengers are are walking toward him.  They all attack him at once.

Jim meets Eph and Nora.  He says they didn’t find the coffin.  Eph shows Jim the worms that they found on the plane.  He says they start their investigation by examining the specimen.

Setrakian is put in lockup at the police station.  The cop says they can’t release him until Monday.

Eichorst tells Palmer that everything went as planned.  He says love is going to guide them all back to their homes and their loved ones. 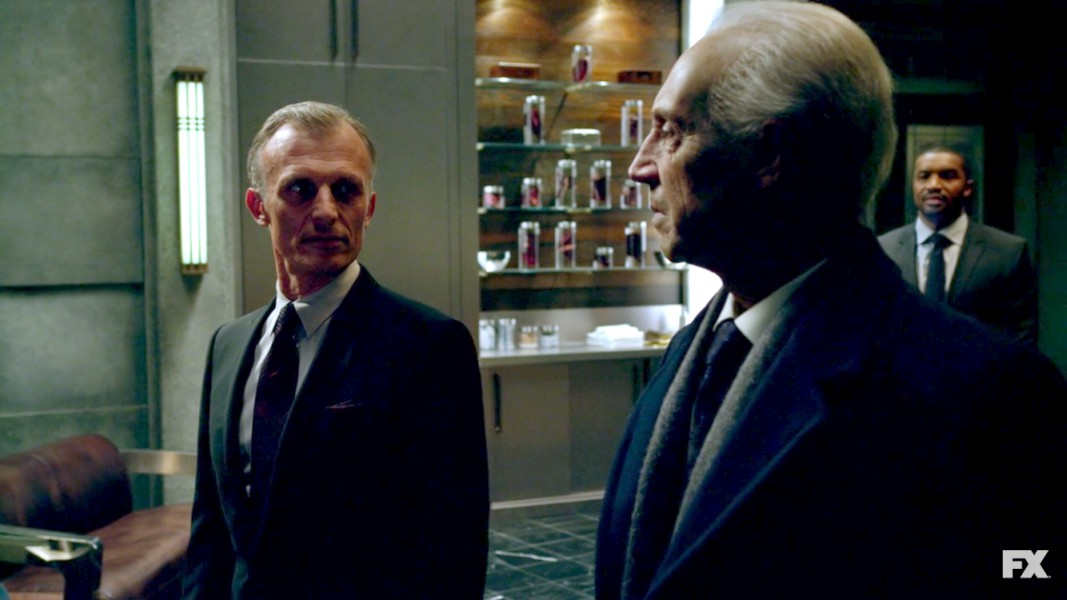 Palmer tells Eichorst that an old man with a sword was arrested. They know its Setrakian.  Eichorst says he will take care of him.  Palmer tells Fitzwilliams to peacefully walk the streets before the fall.

Gus call his mom as he crosses the bridge just before the sun comes up.

Gary Arnot returns home from the airport. His daughter Emma (Isabelle Nelisse) walks in the back door.   She says she is cold. Gary hugs Emma. He is happy that she is home.