The Strain only has a few episodes left in it’s final season.  Last week Ephraim Goodweather (Corey Stoll) was reunited with Abraham Setrakian (David Bradley) and Dutch Velders (Ruta Gedmintas).  Eph did his best to help Setrakian regain his strength, but The Master (Jonathan Hyde) had other plans for the professor.

Gus Elizalde (Miguel Gomez) became the unofficial leader of his crew.  This did not sit well with Alonso Creem (Jamie Hector). Creem betrayed Gus to make a deal with the Master. The Master did not take the deal, but took Creem instead and turned him.  Thus leading Thomas Eichorst (Richard Sammel) straight to his greatest foe.

Vasiliy Fet (Kevin Durand), Mr. Quinlan (Rupert Penry-Jones), and their new friend Roman (K.C. Collins) arrived in New York to a small group of strigoi waiting for them.  They were able to easily avoid being captured.  As soon as they made it to the Brooklyn Bridge, the Master had the bridge blown up.

And finally…Eichorst and Setrakian met for the last time, leaving a major casualty for both sides.

CLICK HERE FOR A FULL RECAP OF THE STRAIN “OUROBOROS”

Eph and Dutch return to the super not so secret hide out and find Eichorst’s head.  Dutch is happy that he is finally dead saying it served him right.

Gus meets them and tells them that Alex didn’t make it.  He leads them to Setrakian. 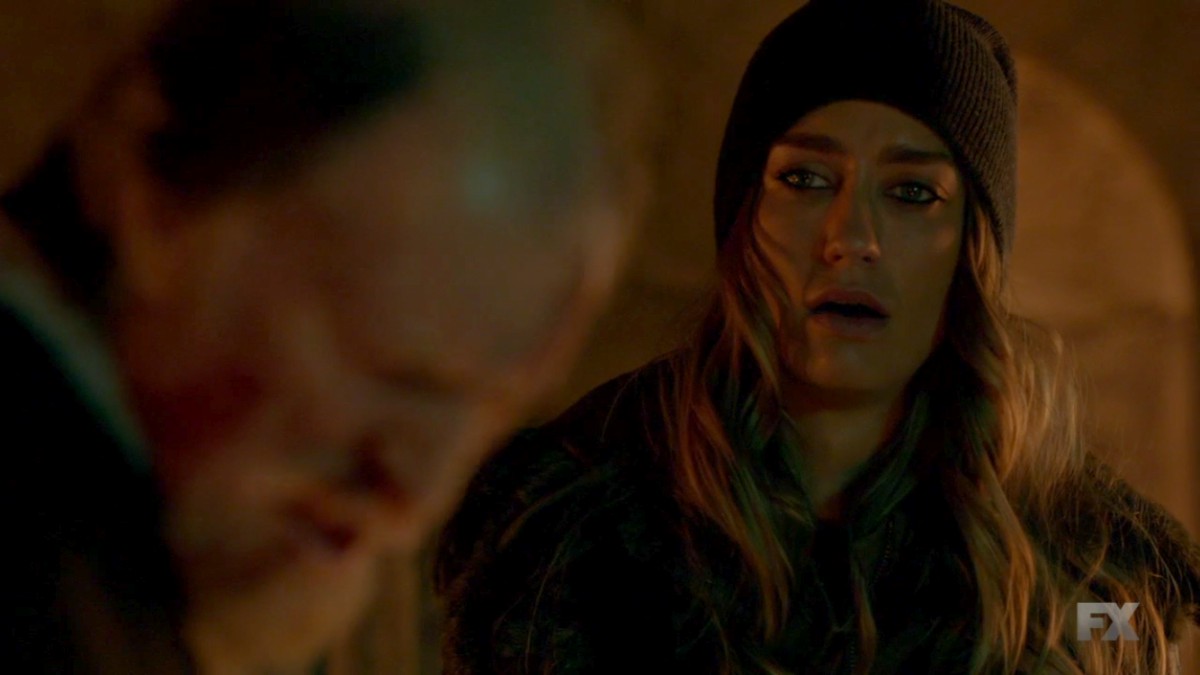 Ruta Gedmintas and David Bradley on FX’s The Strain, fxnetworks.com

The professor is working hard to write down everything he knows.  When he turns to face Dutch, everyone can see that he’s been infected.  He tells them that he doesn’t have much time.

At a Manhattan pier, a mysterious boat arrives. The Partnership River Patrol stops the boat and Roman emerges. He tells them he didn’t know he wasn’t supposed to be on the river.

The lights go out and Mr. Quinlan takes out all of the security guards. Fet comes out of the boat and finds a van that they can use to transport the bomb.

As they drive through Manhattan, they notice that there are no humans on the streets.  They make their way to the Federal Reserve Bank to park the van with the bomb inside.  Fet tells Roman to stay with the bomb, despite Roman’s objections.

Dutch tries to talk Setrakian into letting them help him. She says they need him.  What about the white?  Nope. Setrekian says the white won’t help.

Fet and Quinlan arrive at the hideout.  Fet is happy to be back, but his happiness is damped when he sees Setrakian’s condition.

Setrakian tells them the best way to stop the Master is to separate him from his human collaborators.  He says once the Master is alone, they can strike.  It will be at the cost of self sacrifice though.

Fet asks about the nuke. Setrakian begs him to not let the work he has done be in vain.  Fet promises.

Setrakian can hear a humming and knows the Master almost has complete control of him.  He hands his sword to Quinlan. 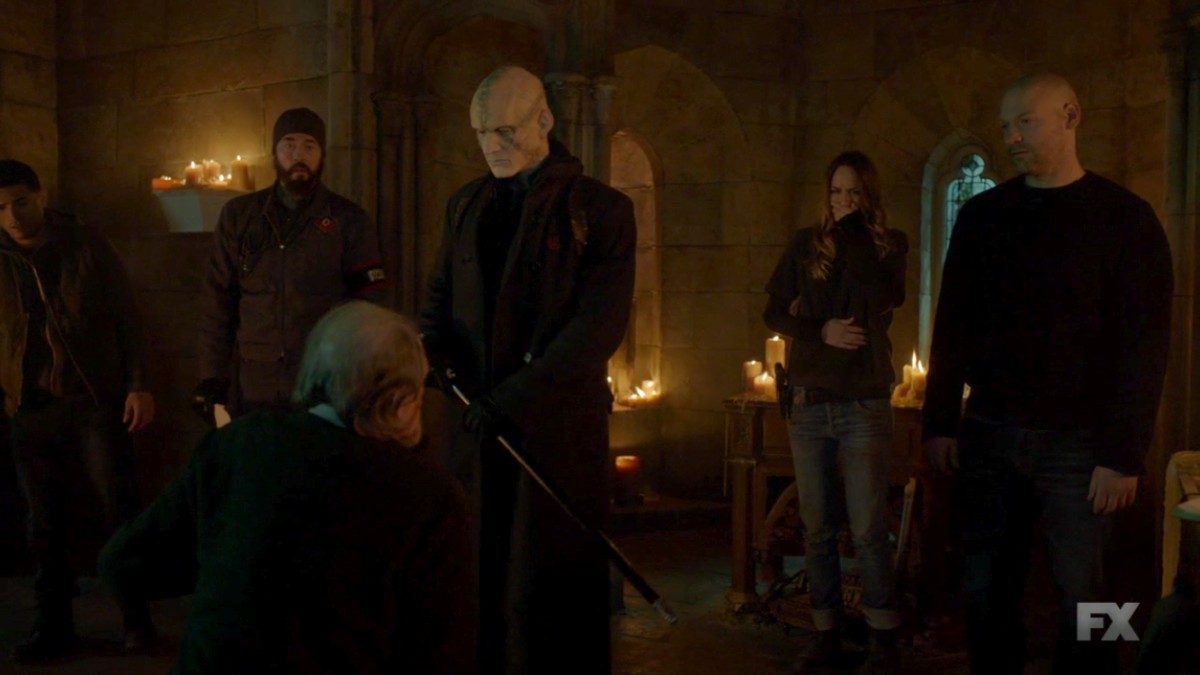 Setrakian gets on his knees in front of everyone.  He says nothing.  He only nods at Quinlan that he is ready to die.  Quinlan takes his head and Dutch begins to cry.

The group buries Setrakian outside of the hideout.  Quinlan says they shouldn’t mourn Setrakian.  They should honor what he taught them.  “The real impact of life depends on will and the determination to keep fighting no matter the cost.”  Quinlan gives Setrakian’s sword to Fet saying he would have wanted Fet to have it.

Inside, Gus and Eph talk about Setrakian had taken all of the blood thinners, knowing it was poisonous.  Gus says Setrakian wasn’t going to let them win.

Eph asks about Alex.  Gus says he wasn’t there when she died.  He tells Eph that Eichorst killed his cousin Raul.  He says it was probably better that Eph didn’t see Alex die.  At least they got to say goodbye to Setrakian.

Dutch finds Fet alone. Fet tells her about his dream that Setrakian was infected.  That dream came true. Dutch says he was just dreaming about his greatest fear.

The group looks over Setrakian’s notes and can’t figure out what needs to be done.

Fet and Quinlan want to use the nuke. Dutch tells them that Setrakian admitted to being wrong about the ‘face of God.’ Quinlan says it’s possible that Setrekain wasn’t in his right mind when he died.  What they do know is that bomb destroyed the ancients.

Eph says they assume the bomb did, but they are not sure.  The bombs did create a nuclear war and killed thousands of people.  He’s weary about using another bomb. Dutch agrees with Eph. 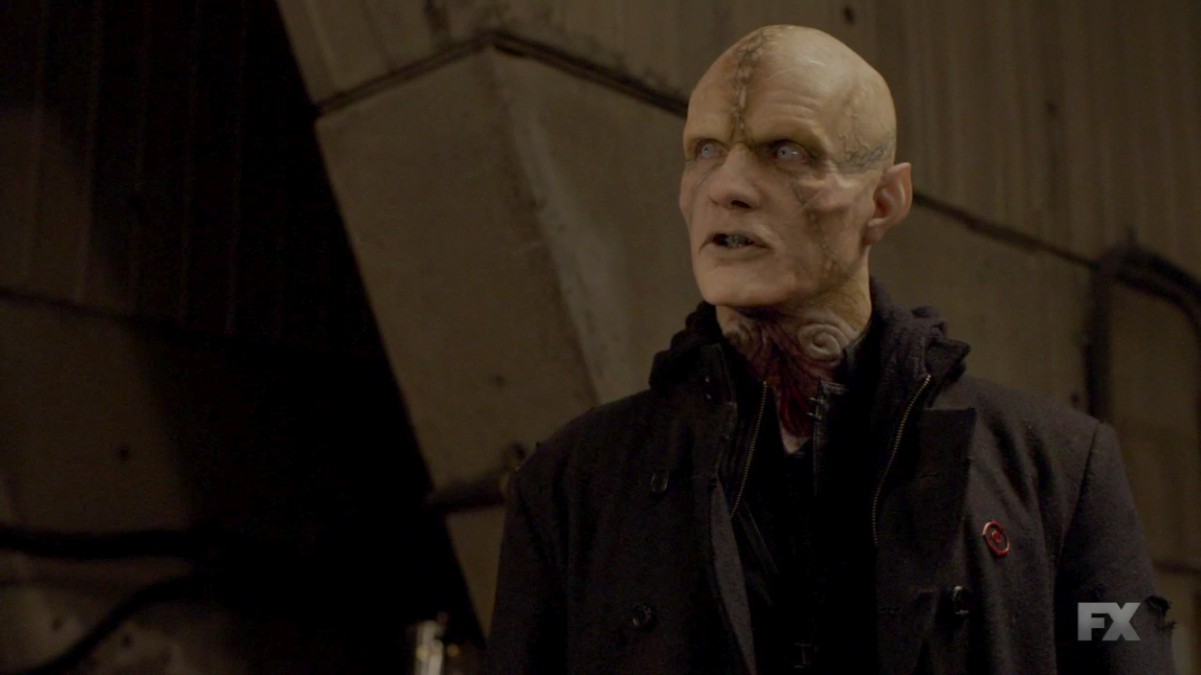 Quinlan reminds them that the Master blew up all of the bridges to prevent the bomb from getting on the island.

Quinlan says the best way to cut of the Master from his collaborators is to set off the bomb and kill them. Fet reminds him that they don’t know where the Master is.

Dutch comes ups with a plan to grab Sanjay Desai, a collaborator and make him tell them where the Master is.  And! They can get everyone out of the blood draining facility before they kill anyone else.

At the Empire State Building, Zach meets with the Master at his coffin.  The Master tells him that their enemies have smuggled a nuclear weapon onto the island.  He says they are at risk.

Zach asks what they can do. The Master says there is one thing and only Zach can perform this task.

Zach prepares to leave the building while Abby and his feeler look on.  He tells them he has to leave. Abby says the Master chose him for the task because he was born for it. 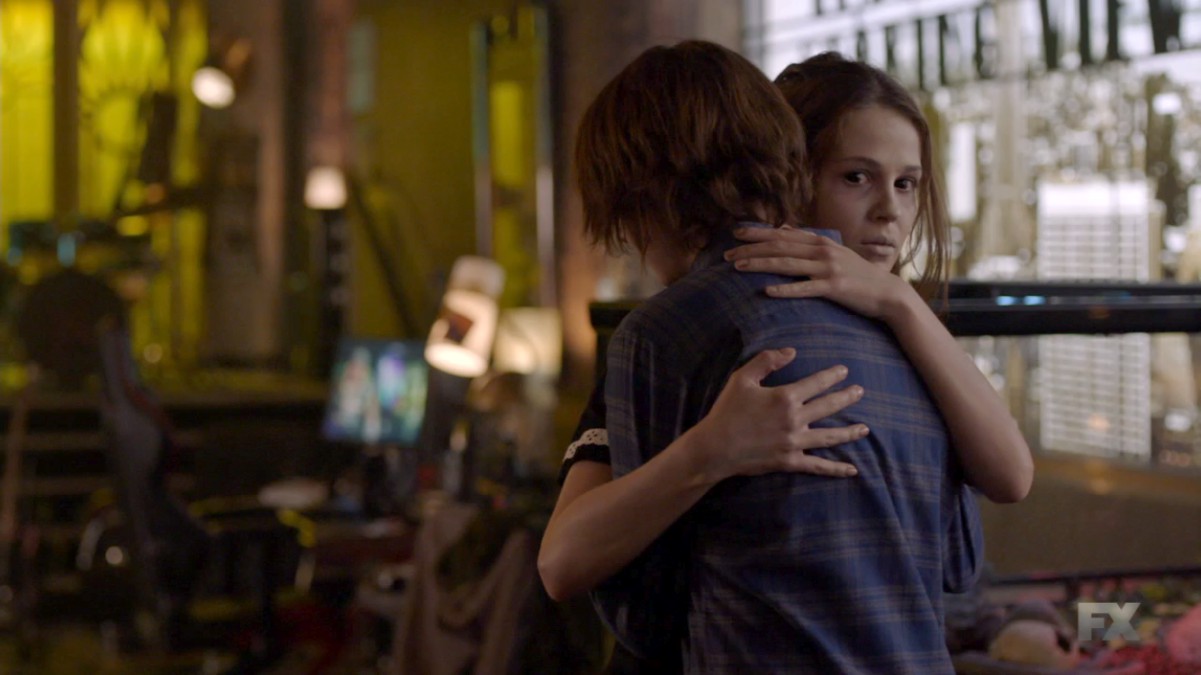 Jocelyn Huden and Max Charles on FX’s The Strain, fxnetworks.com

Abby hugs Zach and she is surprisingly warm.  Zach leaves his pets to go on his mission.

Dutch and Fet prepare to leave for their own mission.  Dutch says Desai probably upped his security so they should be ready for anything.  Fet tells her it makes him sick to know that she was kept captive there.

Quinlan asks Gus why he joined the fight now.  Gus says Setrakian make him realize that you can’t escape a fight you’re already in the middle of.

Gus feels guilty.  He thinks Eichorst found Setrakian because of him.  Quinlan tells Gus that others have done far worse things to feel guilty about.

Gus tells Quinlan, he has no idea what he’s done.  (Note: Gus is the person who picked up the Master’s coffin and drove it into Manhattan in season one)

Quinlan says he doesn’t need to know.  He tells Gus not to be distracted by his guilt.

The team arrive at the Partnership Medical Facility.  Quinlan tells the guard that he has prisoners that are to be drained.  The security guard questions why they didn’t go to the loading dock for sorting. Quinlan says he’s under special orders and the guard lets him through the gate. 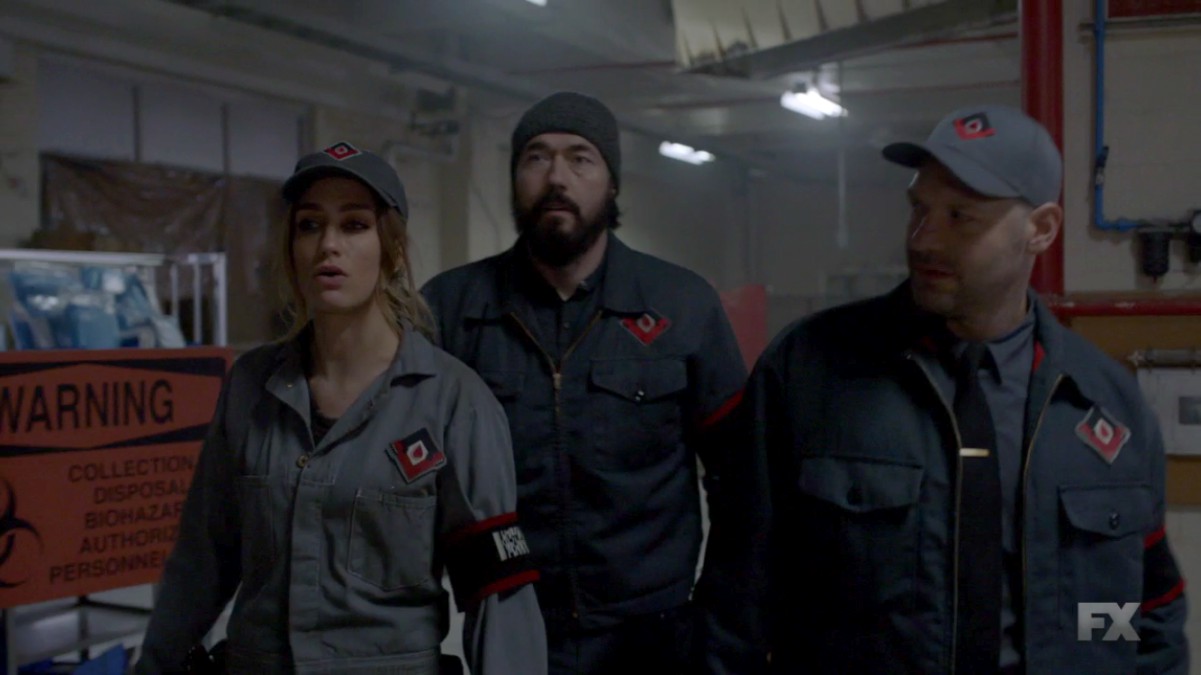 Once inside, the group separates.  Fet and Dutch go to Desai’s office, Quinlan and Gus go to the drainage assembly line, and Eph goes to the control room.

The guard at the gate calls Desai to let him know there was an unusual delivery.  Desai sets off the alarm and tells security to lock down the facility.

Eph is successful in deactivating all of the doors.

Desai sees Fet and Dutch coming to his office.  He gets away before they enter.  Fet and Dutch kill the guards and run after Desai.

Gus and Quinlan fight off the strigoi workers and free the people from the cages.

Desai takes three pregnant women hostage.  He tells Dutch he will kill them if she doesn’t stop coming after him.  He tells the guard they are safe until the strigoi get there to stop Dutch and Fet.

Fet tells Dutch they can’t wait.  No matter what Desai does, they have to move.  Dutch says ok. Fet starts to bust in the door.

Desai tells the guard to kill one of the women.  The guard won’t kill her. Desai points his gun at the woman and the guard knocks Desai down. The women escape.  Desai kills the guard and escapes too.

Dutch and Fet get through the door and chase down Desai.  Desai runs into another hallway and runs into Eph.  Eph starts him chasing too. 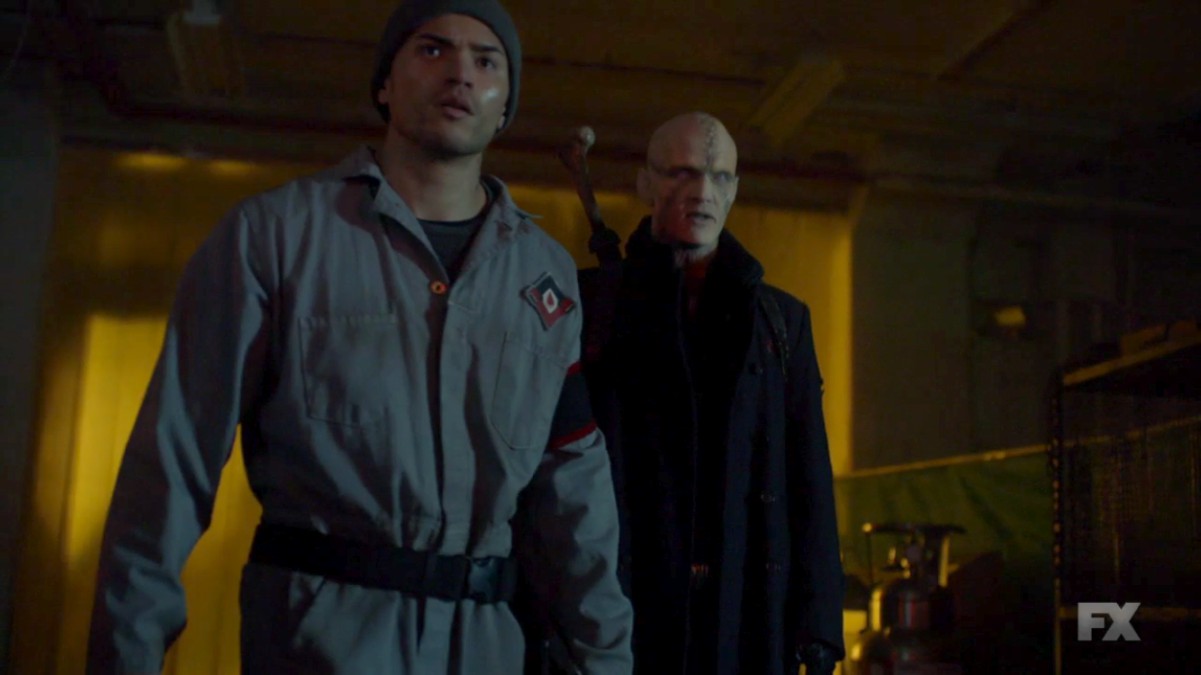 Miguel Gomez and Rupert Penry-Jones on FX’s The Strain, fxnetworks.com

Everyone catches up with Desai and he tries to escape under a row of tanks. Dutch finds him and he tries to fight her off.  She is able to stop him by sticking a knife in his foot.  Dutch overpowers him and they take him back to Gus’ hideout.

At Gus’ hideout, one of his guys tells Eph there was a kid looking for him at the market.  The description sounds just like Zach.

Dutch and Fet try to tell Eph not to go looking for him.  Eph says they are probably right, but he has to see for himself.

Eph walks around the market looking for Zach. When he finds him, he is happy to see his son. 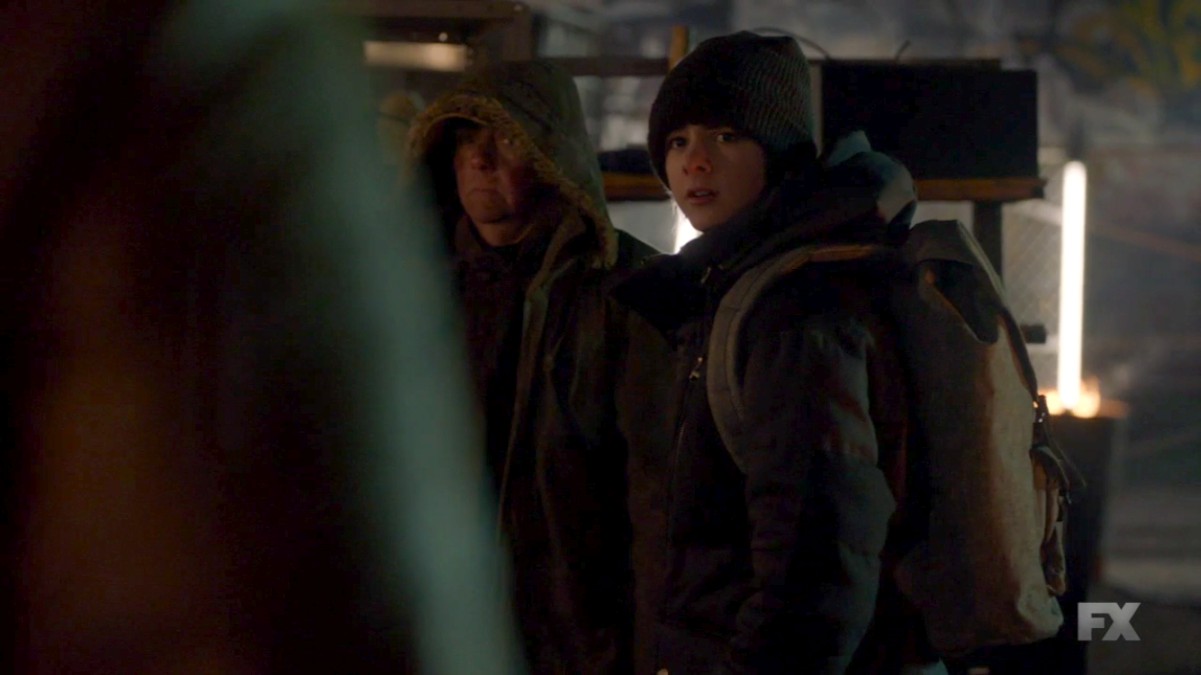 This was a very emotional episode for Eph.  He loses not one, but two friends…even though he didn’t really know Alex for very long. He was right though. If it weren’t for Alex, Eph wouldn’t have rejoined the fight.

And then there’s Zach.  I hate that he only went looking for Eph because the Master told him to.  I hate that Zach is so angry at Eph.  The Master did a good job of brainwashing Zach. What will it take to turn Zach against the Master?

And last, but certainly not least Abraham Setrakian.  I knew he wouldn’t make it to the end of the show.  I’m actually surprised he even made it to season four.  He has been the wizard of the group. He taught them everything they needed to know to battle the strigoi.  Without Setrakian, humans would have lost a long time ago.

Two episodes left…What is Zach up to?  Can he be turned?  And what will it take to finally defeat the Master once and for all?

Find out when the next episode of The Strain airs next Sunday on FX.