A win quickly turns into a loss on The Strain. Dr. Goodweather and his new band of resistance fighters were able to kill thousands of strigoi in Philadelphia. They also found something new about the strigoi. They are shipping mass quantities of…something around the US. What is the Master up to?

Dr. Sanjay Desai (Cas Anvar) and his wife are having dinner. Mrs. Desai is nervous and is anxious to leave. Dr. Desai tells her to relax just as Thomas Eichorst (Richard Sammel) joins them. Eichorst wants a progress report on the Type B Positive babies. Dr. Desai says they are on schedule for the first baby to be born.  Eichorst thinks that the process is taking too long. He suggests that the women should have two babies a year. They want results now or they will find someone who will produce faster.

Meanwhile, Dutch (Ruta Gedmintas) is looking for another way out. She flirts with a security guard with more access than the delivery guy. Rosalinda says she’s crazy.

Desai asks Dutch to his office and asks her to sit with the woman in labor. He wants her to keep the woman calm.  And if Dutch refuses, he will send her someplace where a girl like her cannot survive. (Really?) 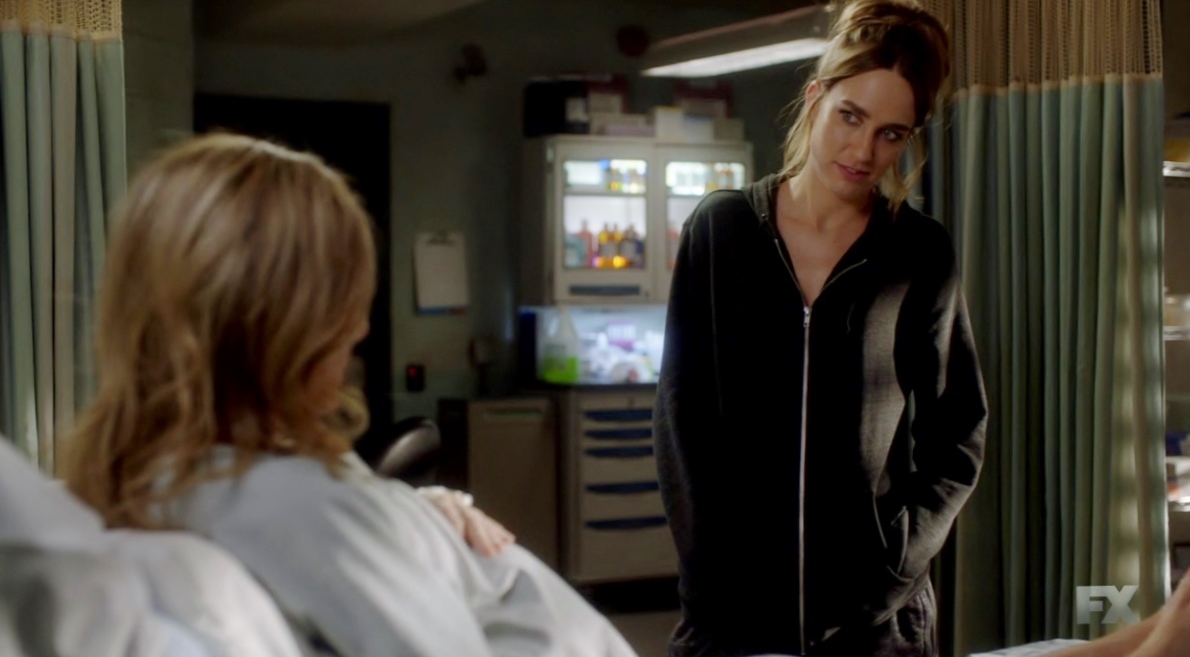 Ruta Gedmintas as Dutch on FX’s The Strain, fxnetworks.com

Dutch visits the woman in labor, Sophia (Lauren Collins). Sophia tells Dutch that this baby is the only family she has left. She is nervous about the delivery.

Nurse Greenwood (Lisa Ryder) comes in to check on Sophia. Sophia asks how long the procedure will take.  The nurse replies with a rude comment and leaves.

Dutch leaves Sophia to rest and runs into Desai. He lectures her about her attitude and moves along. She goes to find a friendly face and gets some serious shade from Marta (Nicki Whitely). Marta calls Desai, Dutch’s boyfriend. She lets Dutch know that the only person Dutch is trying to help is herself.

The C-Section goes well. Dutch is able to keep Sophia calm.  When the baby is delivered, a nurse immediately takes the child away.  Dutch yells at the doctor to let Sophia see the baby.  The guards pull Dutch away and she fights back.

Dutch grabs a scalpel and Dr. Desai. She uses him to get out of the delivery room and into the stairwell. Desai tries to fight back, but Dutch beats him down and runs.

Gus (Miguel Gomez) teaches Raul (Michael Reventar) how to shoot a gun. He tells him never to point the gun unless he intends to shoot. He says the guns is just a tool.  The real weapon is Raul’s brain.

One of Alonso Creem’s (Jamie Hector) guys comes in all beat up and says he was jumped. The people, not strigoi, who jumped him too all of his things. They claimed the territory and everything that comes with it.  The man dies after relaying that information. 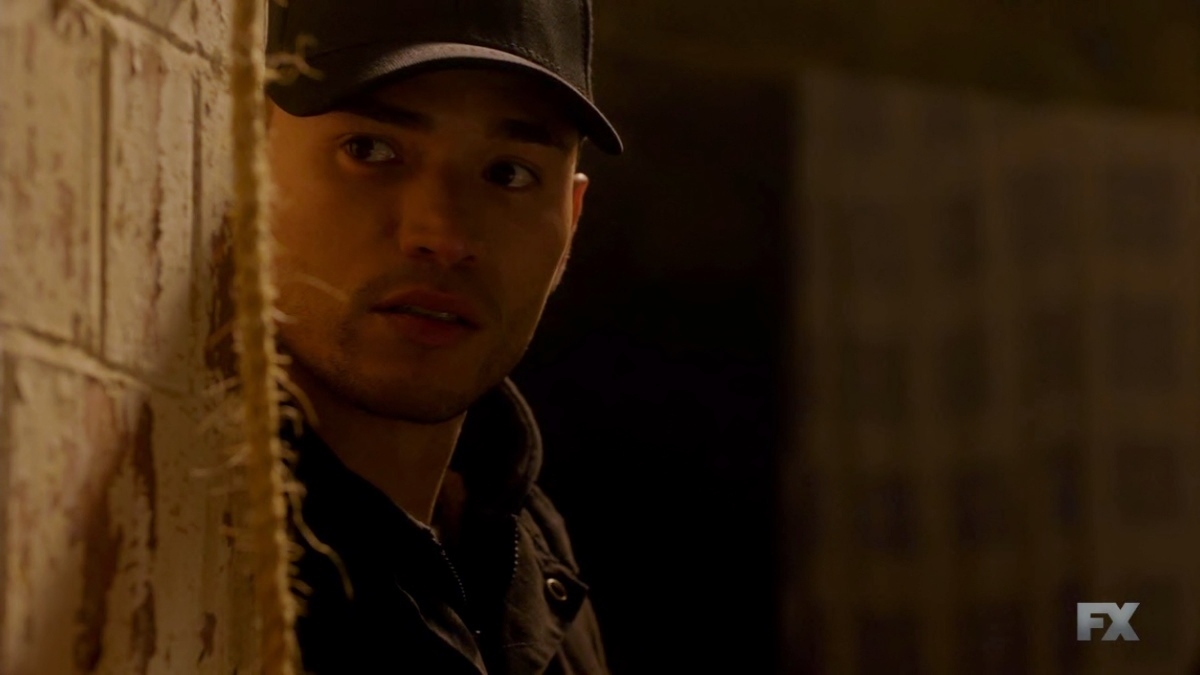 Miguel Gomez as Gus Elizande on FX’s The Strain, fxnetworks.com

Gus investigates the guys who jumped their friend. He follows them to their hideout that is heavily guarded. He finds a vent and crawls through to find a warehouse full of goods.  And the guys who took them are NYPD.

Gus fills everyone in on the warehouse and the make a plan to attack the NYPD and take their stuff back.  Creem wants to break through the front door and take on the cops face to face.  Gus says no. They have to go through the tunnel. Everyone agrees with Gus and Creem concedes, but he’s not happy about it.

The time comes for them to hit the warehouse. Everything goes as planned. They kill all of the cops and start taking the goods in the warehouse.

Raul is a little shook up afterward. Gus says he did what he ad to do.

Eph (Corey Stoll) examines papers that were found in the transit office that they found at the end of the last episode.  Alex’s (Angel Parker) brother Jason (Rainbow Francks) asks Eph when they are going to hit the strigoi again.  Eph says they have to be careful.  Their attack heightened the strigoi’s security and they will be expecting another hit.

The look out at the school sees strigoi pull up. He pulls the fire alarm to let everyone know they have been found.  Eph instructs everyone to get out.

The strigoi attack and turn a lot of the group, including Jason. Alex shoots the strigoi who has Jason, but it’s too late.  Jason is pale and starting to turn. He tells Alex it’s okay to kill him.  Alex starts to cry and can’t shoot him. 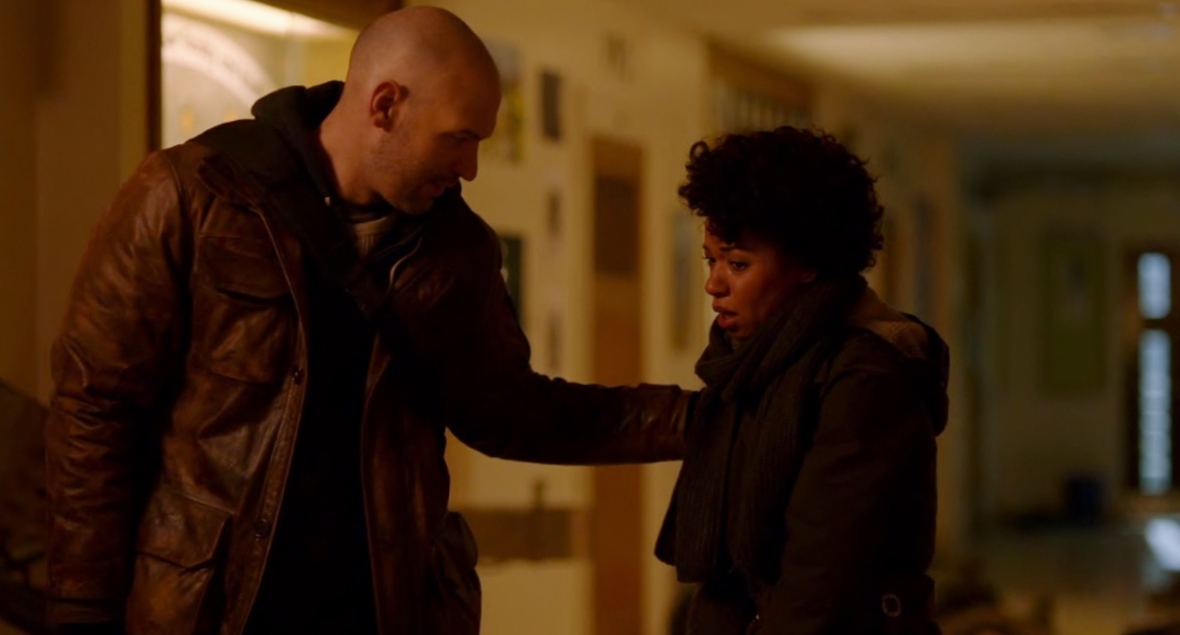 Corey Stoll as Eph Goodweather and Angel Parker as Alex on FX’s The Strain, fxnetworks.com

Eph steps up.  Jason tells Alex to make them pay. Eph shoots him in the head.

Alex and Eph run and find a safe place with lots of mannequins. They are safe for the time being and Alex has time to grieve her brother.

Eph watches as the strigoi load up a bus of people. Alex finds whiskey and offers it to Eph. Eph quit drinking after the first bomb went off in New York. He finally tells her that it was his son who blew up Liberty Island.  And not to help the strigoi. Zach did it because he was angry at Eph for killing his mom.

After the bus leaves, Eph and Alex go investigate the building.  They find a brochure for New Horizons. The people were recruited to start a new life in the country.  The units being shipped are people. What are they really using these people for?

Back in New York, Dutch escapes Desai and runs into a warehouse. She see the strigoi hang a person on a meat hook. That person is hooked up to a device that drains them of blood. She sees several drained bodies on an assembly line.

Dutch finally looks around and see several strigoi closing in on her.

Read all The Strain recaps, here.

OK. We knew harvesting humans was the plan.  We saw Eichorst set up the assembly line process last season.  So that was not surprise.  I want to know what they are doing with the babies.  Why B positive? That’s the big question.

The story is moving pretty fast and we have yet to see what happened to Setrakian.  I have a theory…but I’ll keep it to myself.

How long will it be before our heroes reunite?  They have a weapon. They know what they are up against. And let’s face it…they are better when they are together.