The Strain season four started out with our heroes spread out across the US. Eph is in Philadelphia and might have found a way to get rid of the strigoi. Fet and Quinlan are in North Dakota looking for nuclear warheads. Zach is living with the Master. Gus is working with Alonso Creem to find food and supplies to give to those in need.  Dutch was captured and lives in a breeding home for B-Positive women. And Setrakian…we know he’s been captured, but we don’t know where they took him.

Fet (Kevin Durand) and Charlotte (Rhona Mitra) are hunting for food.  Charlotte shoots a deer and they have dinner.  Quinlan (Rupert Penry-Jones) and their new friend Roman (K.C. Collins) discuss that the missile silo is not on Quinlan’s map. Roman says the base is secret.  The men there won’t care if they take the missile.

Fet asks Roman if he knows who gave the order to release the missiles. Roman has no clue. Fet says they have been knocked down the food chain.

Quinlan says it was the bombs made by mankind and released by humans that brought about the night eternal.  He’d be hiding in his tunnels if they hadn’t bombed each other.

They get to the base and find dead men and strigoi there.  Fet throws a silver grenade into a silo to kill any strigoi inside.  Quinlan looks and listens for strigoi screams. Someone shoots Quinlan from inside the silo. He falls into the silo.

Roman tells Fet about an entrance to a tunnel to the base. Fet says, “tunnels are my territory,” and enters.

Quinlan is alive, but injured.  He uses some of the silver from the grenade to cauterize the wound. He tries to see who is shooting and another shot is fired. Quinlan has a gun and starts shooting back. He runs out of ammo, but there is another gun nearby. 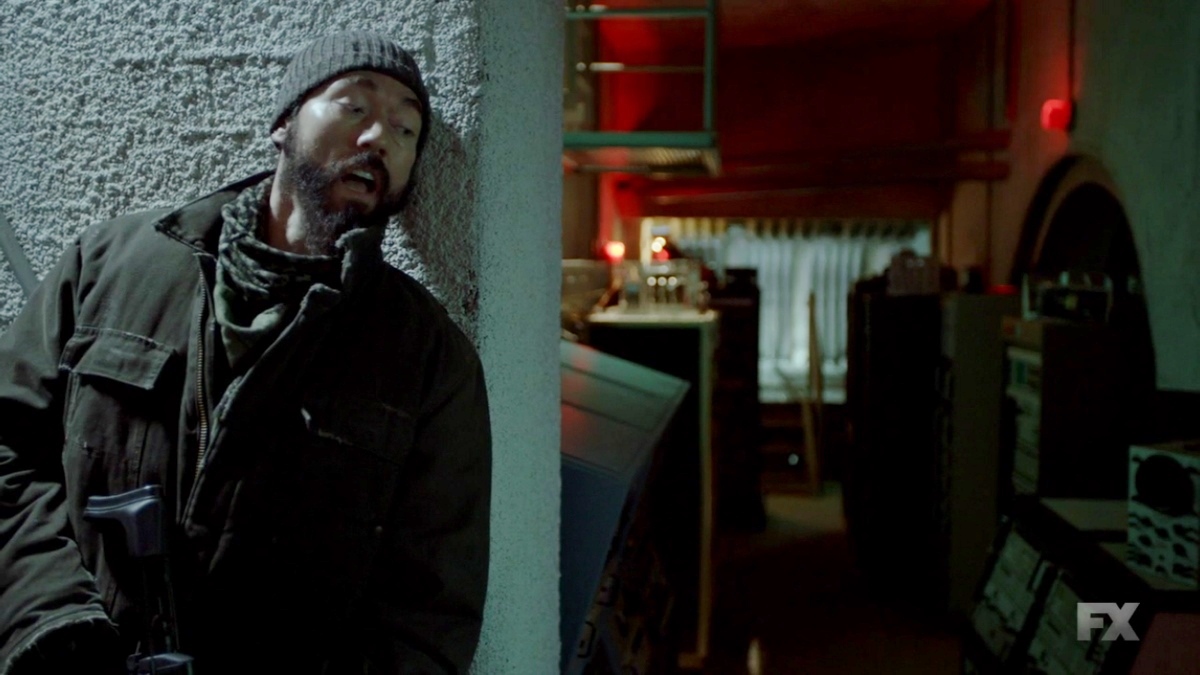 Kevin Durand as Vasiliy Fet on FX’s The Strain, fxnetworks.com

Fet finds the shooter and tells him to lay down his weapon. He says Quinlan will kill him if he doesn’t stop shooting at him. Quinlan starts talking to the shooter as Fet sneaks up on him. Fet shoots the guy and Quinlan is able to get up.

Fet talks to the soldier and asks him what happened at the base.  He calms down the shooter. Quinlan shows up and shoots the guy in the head…because he said he would.

They find the warhead and load it into a truck.  When Roman opens it up, the plutonium pit is missing.  Fet remembers passing a strigoi convoy.  He thinks they took the pit. They decide to catch up to the convey to retrieve the plutonium.

Zach (Max Charles) is eagerly watching a snake feed on a mouse. His new friend, the maid arrives. He hides the snake from her and watches her work. The girl goes collect Zach dishes and sees uneaten fresh fruit. She takes two pieces, but Zach’s feeler sees her. The girl screams and drops the fruit.  Zach calls off the feeler and she runs away.  He sees the fruit on the floor and goes after her.

Zach catches up with the girl and gives her the fruit. She says she took it to give to other kids  where she lives  She says some of them are sick because all they get to eat is one freedom bar a day.

A strigoi approaches them. The girl gets scared. Zach turns to the strigoi and tells him that she’s with him.  The strigoi backs off and leaves.

Zach tells her he can go wherever and do whatever he wants.  Zach asks her to go where they can be alone.  He promises there are no strigoi there.

Zach takes Abby to the Museum of Natural History. She asks him why he’s special. He says the strigoi think he has potential. 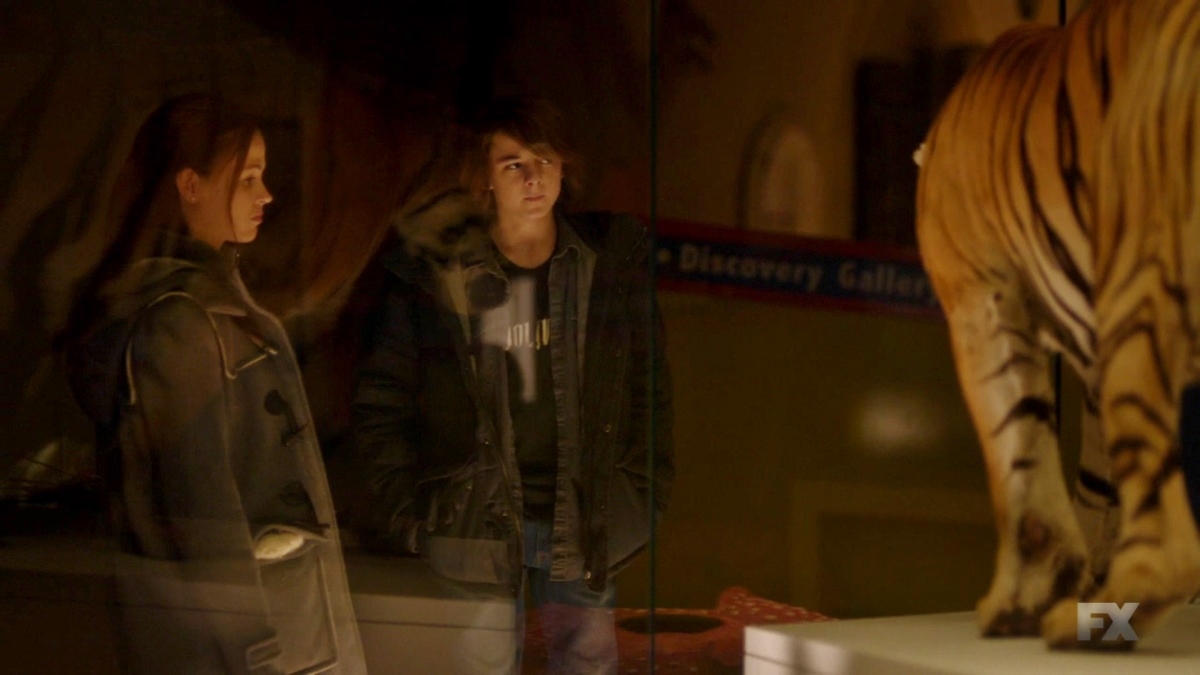 Jocelyn Hudon as Abby and Max Charles as Zach Goodweather on FX The Strain, fxnetworks.com

Zach looks at a tiger and remembers the tiger he shot at the zoo. He snaps out of the memory to tell the girl that she can have anything she needs.  She asks for food for her friends. Some of them are sick and all they get to eat is one freedom bar a day. Zach agrees.

They finally exchange names! Her name is Abby (Jocelyn Hudon). Abby is thankful saying he has no idea how much it means to her.

Zach goes to see the Master (Jonathan Hyde). He asks the Master if the people have enough food. The Master says the food was destroyed because the people released nuclear bombs on each other.  The radiation destroyed the world’s food supply.

Zach tells him that he no longer needs the white. The Master says he needs Zach help to make the world less impulsive and violent.  If Zach wants to be an ordinary, he will send him away to live with the others. Zach would have nothing to offer Abby if he leaves.  He says it’s Zach’s choice.

Zach says he will help the Master. He bows down and takes the white. (GROSS!)

Eph (Corey Stoll) is boiling rat poison to put into the strigoi’s blood supply. He tells Alex (Angel Parker) the poison should thin the blood.

Alex tells him about her son.  She remembers his story about meatloaf and laughs at the thought of how funny he was. Eph says it’s good that she can remember those good feelings.  He says he remembers the events, but not the feelings.

Later, Alex and Eph are on a bus waiting for a strigoi tanker to drive by.  They talk some more about how Eph ended up in Philly. He says after the first nuke went off, he saw a guy in a car and asked if he could catch a ride. The guy said he was going to Philadelphia so Eph said okay.

The tanker drives by and the bus follows. The resistance team set up a fake crash to stop the tanker. While the drivers try to clear the area, Eph hooks up a hose to the tanker and Alex releases the poison.

Eph see strigoi approaching.  He tries to help the drivers move their vehicles.  The bumpers are stuck. They work to get it unstuck before the strigoi get to them.  Angel disconnects the hose from the bus. And everyone drives away. 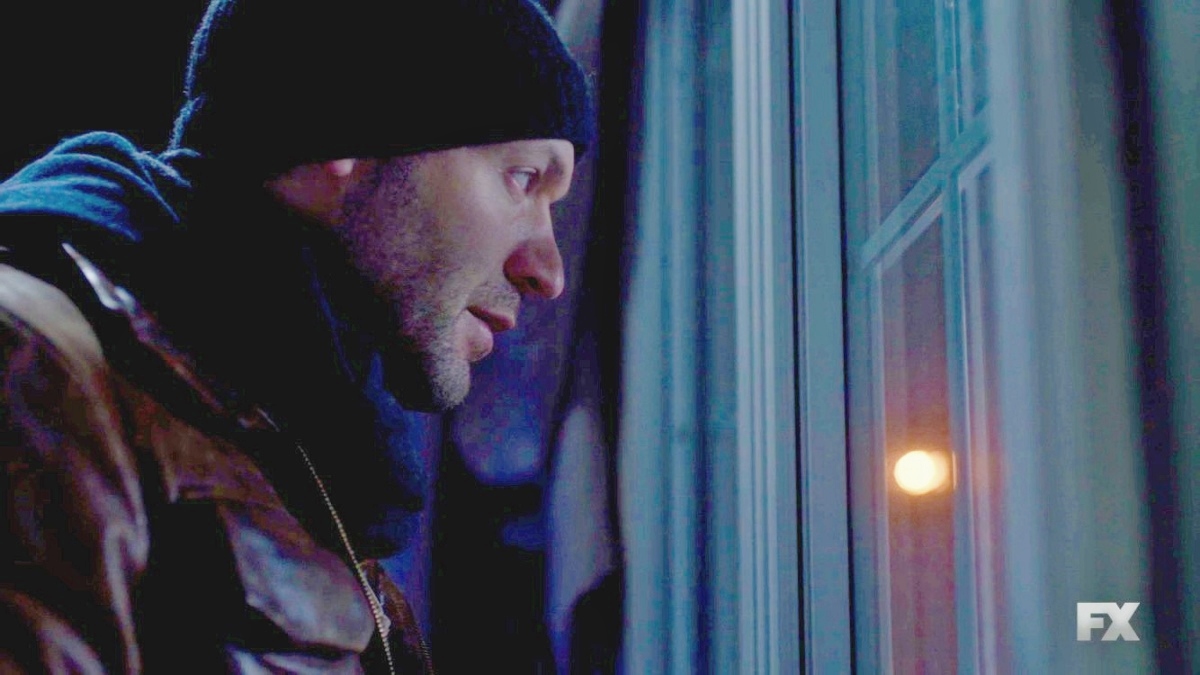 Corey Stoll as Ephraim Goodweather on FX The Strain, fxnetworks.com

Eph, Alex and her brother follow the tanker to a strigoi house. They wait and watch for strigoi coming and going.  When activity stops, they go into the house to make sure the strigoi are dead.

Everything is dark, smelly, and quiet.  Eph finds dead parasitic worms on the floor. They head upstairs and find a trough of blood.  In the next room there is a pile of dead strigoi.

They are surprised to find one strigoi alive and quickly kill it.  They head back downstairs and find more dead strigoi.  Eph says this is a win.

In New York, Eichorst (Richard Sammel) rushes to the Master to tell him that thousands of strigoi are dead in Philadelphia and surrounding areas.  He tells him they were all poisoned. The Master says it’s Setrakian.  He’s happy that Setrakian and his team have finally emerged.

The Master tells Eichorst to send a team to Philadelphia to find them and crush them.

Eph, Alex and her brother walk through the house and into an office. It’s some kind of transportation office that is tracking shipments throughout Pennsylvania.  Shipments of what?

Honestly, I’m anxious for the team to reunite, save Dutch, find Setrakian, and find a way to reason with Zach.  It never fails in a story that team is stronger together.

Now that Eph has a weapon, he has to let other resistance fighters know.  The more they can connect with the better. Of course the Master has control over any communication lines.

I get what the Master was saying. Humanity is out of control. They needed to be humbled to be reminded of their vulnerability.  As old as the Master is, he should know that humans are rebellious by nature. They will continue to fight him.  Even if he does destroy Eph, someone else will step in his place and continue the fight.

Let’s talk about Zach. It’s obvious he feels guilty about blowing up the Statue of Liberty.  He’s just now seeing the consequences of his actions.  I have a feeling that deep down, Zach is a good kid.  He’s impressionable and selfish…like any other teenager.  Something will happen to make him see that he’s been wrong this whole time.

And Setrakian. Can we finally see what happened to him? Where is he? Is he alive? Is he safe? Or is he being tortured by Eichorst?  Hopefully we’ll find out soon.