The Master is in control of the US and possibly the world in The Strain.  Episode one of season four caught up with  Dr. Ephraim Goodweather in Philadelphia.  He’s been laying low and helping people where he can.

Vasiliy Fet is on a road trip with Mr. Quinlan and his new girlfriend Charlotte.  Their mission is to find a nuclear warhead to use against the Master.

The Master is busy mentoring Zach Goodweather to possibly, one day become the new Master.

The Partnership has changed the way humans work, eat, and interact with each other.  People like Raul (Michael Reventar) do their part to maintain a peaceful life. He lives on Freedom bars and gives blood regularly.  Raul works in a food distribution plant.  He looks at the food longingly.

Raul returns home to find his cousin Gus Elizalde (Miguel Gomez) asking for help. Gus wants Raul to help him “redistribute” the real food.  Raul is hesitant at first.  Gus reminds him that their family takes care of each other.

The last time we saw Dutch Velders (Ruta Gedmintas), she was with Vasiliy Fet (Kevin Durand) and Abraham Setrakian (David Bradley) as they transported the Master’s body to be destroyed.  Now she is in a facility full of pregnant women.  Dutch is part of a breeding program lead by Dr. Sanjay Desai (Cas Anvar).

Dutch and Setrakian meet with Gus and Alonzo Creem (Jamie Hector) to exchange supplies for medicine.  Setrakian tells Gus they will need him to fight when the time comes.  Gus says he’s done fighting.  His new purpose is making sure people get the things they need.  Setrakian comments that Gus is too talented to sit on the sidelines.

They return to their building and see strigoi taking people away.  The building is on fire. Setrakian is worried about the Lumin. Dutch offers to retrieve the book and tells Setrakian to go their meeting place by the river.

Dutch enters the smoking building and immediately encounters a strigoi. She is able to fight him off and get into her apartment. She quickly grabs the book and leaves.  She fights off more strigoi and escapes the burning building. 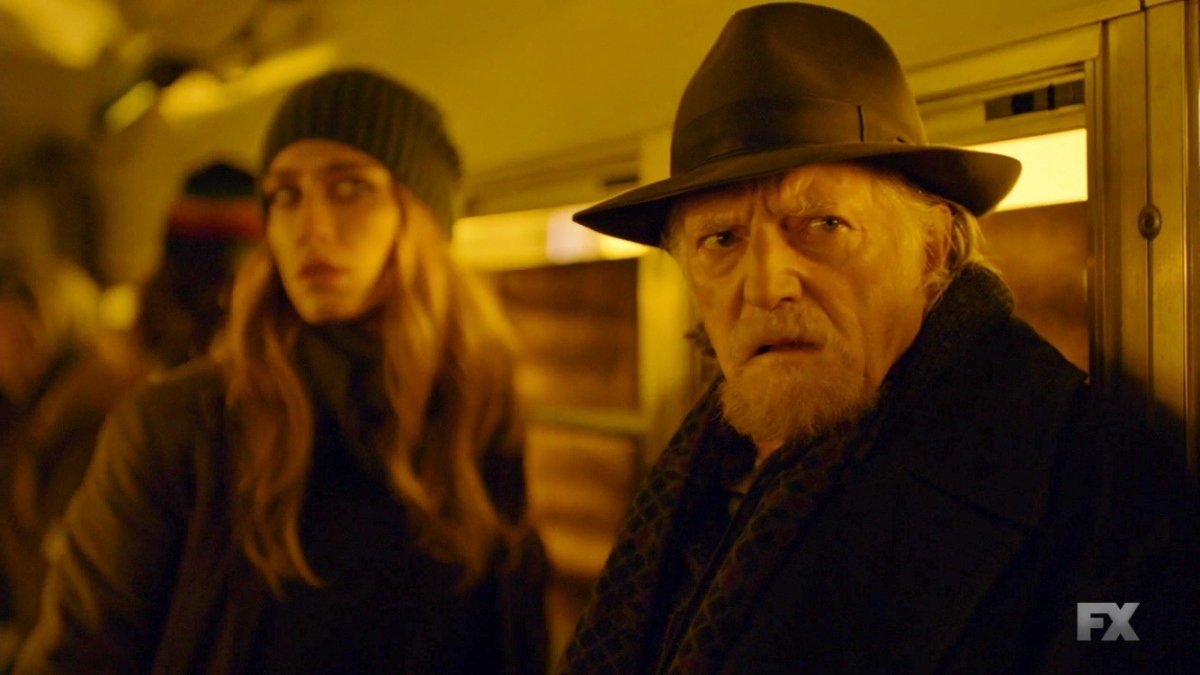 David Bradley as Abraham Setrakian and Ruta Gedmintas as Dutch Velders on FX’s The Strain, fxnetworks.com

Dutch is seen leaving the building. She quickly hides the Lumin and keeps running.  She is stopped by the strigoi bus. Dutch looks at the other passengers on the bus and sees Setrakian has been captured too.

They arrived at the strigoi processing center. It reminds Setrakian of the Nazi concentration camps that he was in during WWII. The guards separate Dutch from Setrakian.

Back to the present day, Dutch watches the food deliveries come in.  She talks to her friend Rosalinda (Jess Salgueiro) about escaping the facility.  Sherry says she is pregnant so she is safe. Dutch says she would rather be out on the streets.

Ephraim Goodweather (Corey Stoll) continues to help his new friend in Philadelphia.  The brother-sister duo have more people and more weapons, including fertilizer bombs.  The woman, Alex Green (Angel Parker), tells him they use the bombs to take the strigoi busses.  Eph says she’s pushing her luck.  She says they have to do something. The human race are in this situation because people sat back and hoped for the best.  Eph agrees with her.

Gus, Creem, and his people meet up with Raul. Gus takes out a strigoi sentinel and the group enters the food distribution warehouse. Raul tells them that the Partnership grows produce with ultraviolet light.

The security guard catches them taking the food. He says he has to report them.  Raul tries to talk him down asking him to let them go. Gus offers to help him if he lets them go.  Creem shoots at him and the guard runs away. Creem’s guys look for the guard, but they are wasting time and decide to leave.  Gus tells Raul, he is with them now. 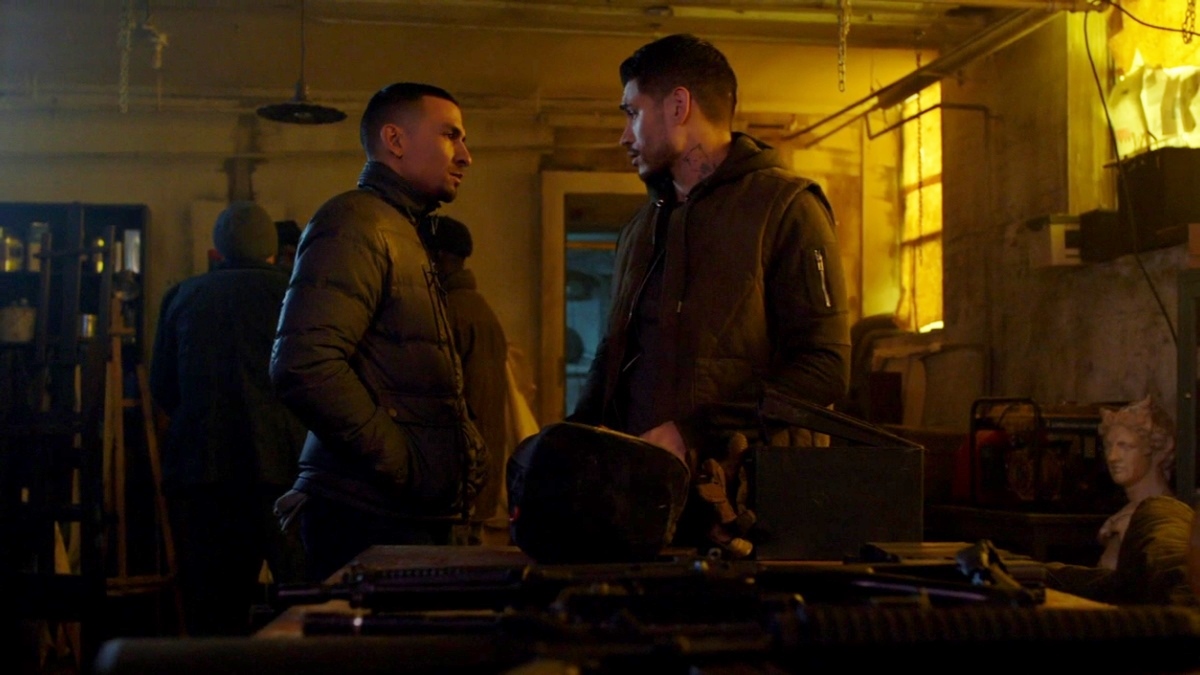 Miguel Gomez as Gus Elizalde and Michael Reventar as Raul on FX’s The Strain, fxnetworks.com

They return to their home base. Raul asks to use the bathroom.  Creem tells Gus that Raul has to go.  He’s unhappy that they didn’t’ get as much as they hoped.  Gus tells Creem that Raul stays.  It’s his fault that Raul has no place to go and no job.

Dutch talks to the food delivery guy, Jeremy (Jonathan Malen). She asks if he is ready to help her get out.  He says he wants to help her, but he’s scared. Dutch says she will tell everyone that they had sex if he doesn’t help her.  She mentions that Desai is very protective of her because she is B-positive.

One of the other women, Marta (Nicki Whitely) comes in and tells everyone that another woman is missing.  She says the strigoi have them there because they like the taste of their blood.  Dutch and the others try to calm her down, but she continues to shout about how their situation.  Marta says they are being used for breeding more B-positive blood.

The nurses come in and Marta pushes them away. Dutch tells her she needs to stay quiet or they will take her someplace she doesn’t want to be.  Everyone calms down before the doctor and the guards arrive.

Desai invites Dutch into his office.  He asks her to help him by being his liaison with the women. He says the women trust her and listen to her.  Dutch questions him about the B-positive living facility for infertile women. He says it’s a minimal downgrade from his facility. She asks about the babies they are breeding.  He tells her the babies are of unbelievable value to the Partnership.

Desai gets frustrated with Dutch. He says anyone who resists the Partnership are delusional and selfish.  He says they putting their self-righteousness above humanity.  Even after his speech, Dutch declines his offer.

Eph tells his patient that he will be fine.  He asks for food and supplies before he leaves.  One of the resistance guys returns from a mission.  His partner was captured and killed.  Eph tells them that the strigoi drank him to access his memories. Now the strigoi know where they are.  They pack up and leave.

Eph asks Alex if the dead guy knew about any other hideouts. Alex says yes. Eph tells them to pack up.  He knows of a place where they can go.  One of the guys asks about the fertilizer bombs. Eph says to leave them and he will take care of them.

The group loads up in the van and they hear a strigoi scream. Eph sets off the fertilizer bombs, blowing up the building.  He goes to the back door and two strigoi exit.  Eph shoots them both and say everyone can leave.

Dutch finds Rosalinda in the bathroom.  She miscarried her baby.  She’s afraid that if Desai finds out about the miscarriage, they will send her away.

A guard finds them in the supply room and calls for Nurse Greenwood (Lisa Ryder). She asks the Jeremy what he is doing. He swears he didn’t touch either of the woman.  No one replies and the guard takes Jeremy away. Nurse Greenwood takes Dutch and Rosalinda to Desai. 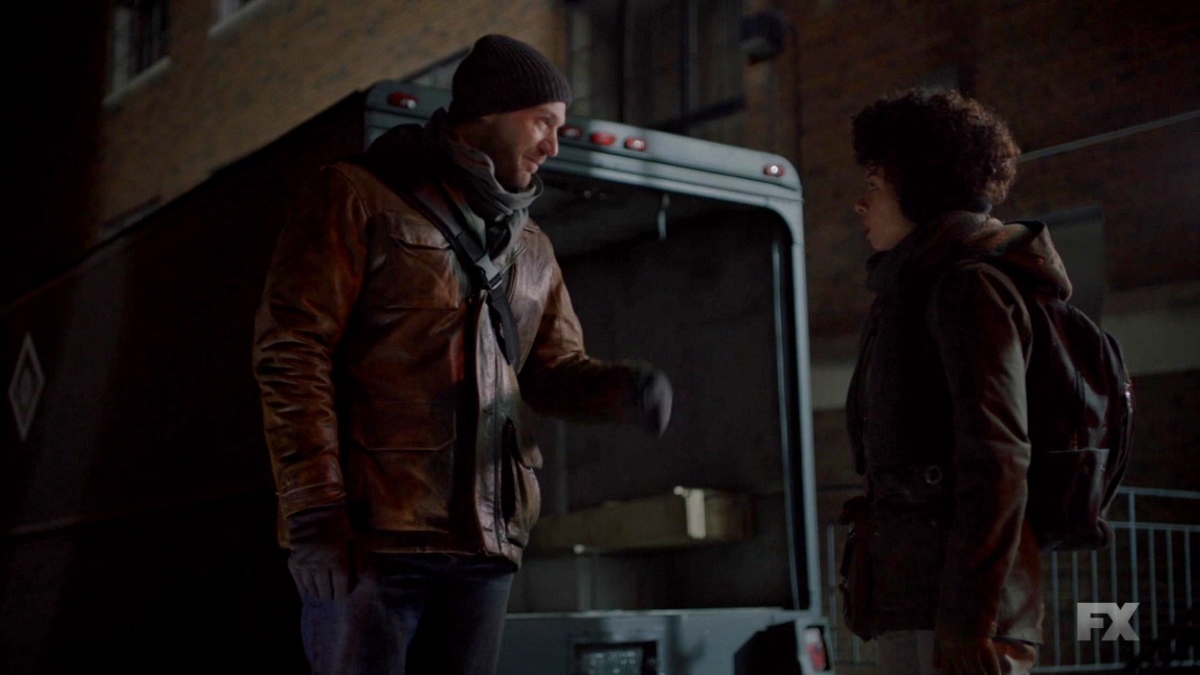 Corey Stoll as Eph Goodweather and Angel Parker as Alex Green on FX’s The Strain, fxnetworks.com

Eph sets up the resistance at an abandoned school and starts to leave.  Alex asks him to stay with them. Eph declines.  He says fighting back only caused him to lose his son.  She says she has lost people too. That doesn’t mean they just lie down and give up.

Eph tells her that she is provoking the strigoi.  People are getting injured and killed. He tells her they are not going to win.  Alex says they are trying to inspire people to fight against the Partnership.

Eph tells her to think bigger. He suggests that they find a way to poison the blood that the Partnership takes from everyone. Alex agrees and says OK.  It looks like Eph just joined the resistance.

It’s good to see that our heroes are still alive. I do wonder about Setrakian.  I’m pretty sure the Master has him tuck away somewhere.  However, last week, The Master said that Eph won’t let Setrakian move against him as long has they have Zach.  I think the strigoi would have told The Maser that they had Setrakian…unless…Eichorst is hiding him.  Hmmmmm…

Eph is just good at leading. There’s not doubt about that. He’s also good at “thinking big” and coming up with ways to strike back at the strigoi. Truthfully, Eph, Setrakian, Dutch, Fet, Gus, and Quinlan really need to come together and fight back.

In past seasons, the resistance was practically invisible.  Now they have more fighters than they know about.  I have a feeling Eph’s plan to poison the blood will work.  Mass producing poison for the rest of the US will be difficult.  Perhaps by then, everyone will be in contact and can work together to win this war.