The Strain season four premiere takes place after a devastating event for humanity…Illumination Day.  Ephraim Goodweather and his team of fighters were not prepared for what happened after Zach Goodweather set off a bomb that blocked out the sun.  Dr. Goodweather and company are now under the rule of the Master and his strigoi.

Let’s catch up…A vampire virus hit New York City via airplane from Berlin.  Dr. Ephraim Goodweather (Corey Stoll) leads a small team of fighters to stop the Master and his strigoi from taking over New York City.  The Master has changed forms twice and his most recent vessel is Eldrich Palmer (Jonathan Hyde).  Palmer is the man who brought the Master to NYC.

Eph’s biggest loss to the strigoi is his wife Kelly (Natalie Brown). After Kelly was turned, she went after their son Zach (Max Charles).  Zach went with his mother willingly.  Eph attempted to safe Zach and killed Kelly, turning Zach against him.  Zach set off a bomb that blocked out the sun, allowing the strigoi to walk during the day.

CHECK OUT THE STRAIN SEASON ONE REWATCH

It’s been nine months since Illumination Day.  A partnership exists between humans and the strigoi.  Humans are required give monthly blood donations at the “freedom centers”.  The strigoi don’t attack unless provoked. Everyone lives peacefully to maintain order and a good life for everyone.  Right?

Eph wakes up to the sound of barking dogs.  He attempts to make coffee, but runs out of gas.  He packs a bag and leaves his home.  As he is walking, he sees several strigoi keeping watch over the humans.

Every human has to wear armbands with bar codes on them.  They are subject to random scans. If the scan is tampered with or anything suspicious, the strigoi are released. 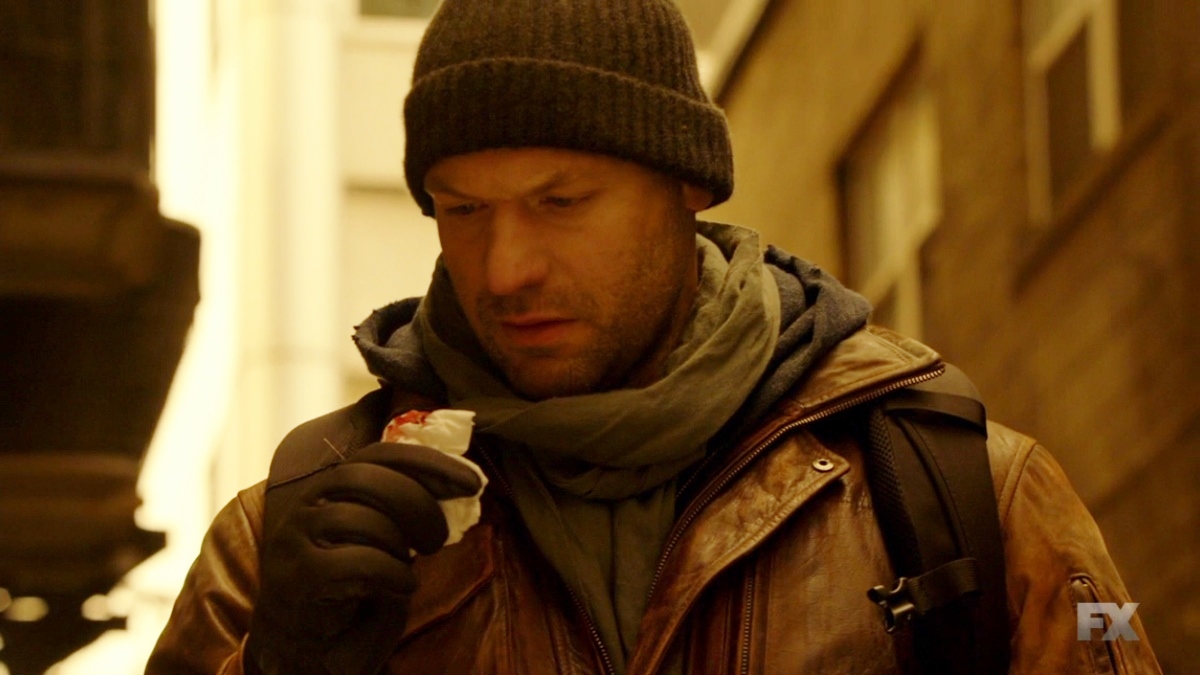 Eph watches as a the strigoi chase a man down.  He tries to quickly escape without being seen.  He sees a water truck  that is guarded by a strigoi.  After the truck leaves, Eph checks the valve that the truck was hooked up to. There is blood on it.

Eph goes to see his supplier.  The supplier gives Eph some work to earn more supplies.  Eph tells his supplier about the water truck.  He says it was filling the building with blood.  His supplier tells him to be more careful with his curiousity.

Zach Goodweather is living the high life at the Empire State Building.  Thomas Eichorst visits Zach to give him a rifle.  Eldrich Palmer, the new Master says they are going on an outing. First, Zach needs his daily dose of white…strigoi blood.

Vasiliy Fet and his companion, Charlotte (Rhona Mitra) asks locals for information about a missile base in the area. The locals are hostile. They threaten to kill Fet and that sets off Mr. Quinlan. He kills a couple of the men, turning the tables in Fet’s favor.

Fet takes supplies from the locals.  He is frustrated.  He’s anxious to find the missiles.  Charlotte eases his mind and they kiss.

Eph visits a woman who has been sick for a while and has alcohol as payment.  No one wants to go to a freedom center for fear of what the strigoi will do to them.  He diagnoses the woman with scurvy. He gives her vitamins and vitamin C packs.  Her husband is upset saying Eph is profiting off of people’s troubles.  Eph shrugs it off and leaves to deliver the alcohol to his supplier.

The Master and Eichorst take Zach to the Central Park Zoo.  He walks around the park with his new rifle. Zach sees a tiger walk toward him. The tiger jumps and Zach shoots it. 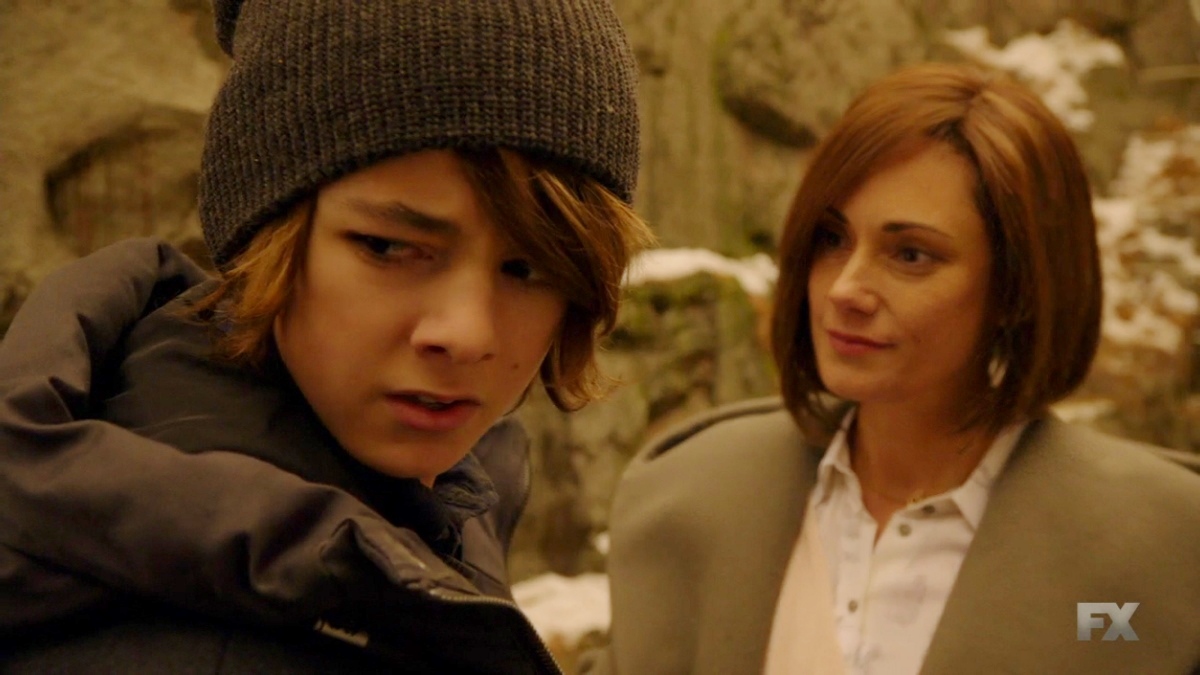 Kelly shows up and tells Zach that she is proud of him.  Zach says he feels bad for killing the Tiger. Kelly tells him to not let his father’s way of thinking hold him back.  Zach says he’s lonely. Kelly says she is always there for him. She tells him to listen to the Master.

Eichorst watches from above. The Master is using mind tricks to make Zach think he is talking to his mother.

Eph takes the booze back to the supplier and to get his supplies. The garage is attacked by a group of strigoi.  They take everyone captive and load them onto a bus.

One of the men wants to know where the strigoi are taking them.  Eph tries to calm him down. They attack the strigoi and the bus blows up. Eph is the only survivor of the explosion. He leaves before the authorities find them.

Eph hears someone ask for help.  It’s the man who bombed the bus.  Eph tries to help the man and someone holds a gun to his head.  It’s the man’s sister.   She is surprised to learn that the bus was transporting human prisoners.  They have to get away from the area quick.  The woman says she knows of a place.

Fet wakes up in his van and Charlotte is not there. He gets out to find her.  Fet finds Abraham Setrakian sitting by a fire.  He says he will get the nuke for Setrakian.  Setrakian says that Fet and Quinlan are humanity’s last hope.  He tells Fet the face of god is his (The Master) demise.  The end is near.  Setrakian turns into a strigoi and attacks Fet.

Charlotte wakes Fet up from his dream.  Fet admits he feels like he is failing everyone in New York. Charlotte says their luck will change soon.

The next day, Charlotte and Fet are gathering wheat.  Charlotte tells him a joke, but doesn’t finish it. Fet turns to her and finds her held at gunpoint. Someone knocks him out in the field.

Eichorst checks in with The Master. He says Zach has no interest or aptitude for their work.  The Master says leaders are not born.  He says he occupied Palmer’s body out of necessity, not choice.  The Master thinks his next vessel should be tailor made.

Eichorst protests saying the boy is unworthy.  The Master is not happy with Eichort’s response. He says there are many reason to keep Zach.  He says Ephraim Goodweather will not allow Setrakian to move against the Master as long as they have Zach.

Eichorst says they are looking for Ephraim’s people and every nuclear weapon in the country. The Master tells him to bring them to him on their knees and they will no longer need Zach. He also tells Eichorst to give Zach a reward for his kill. 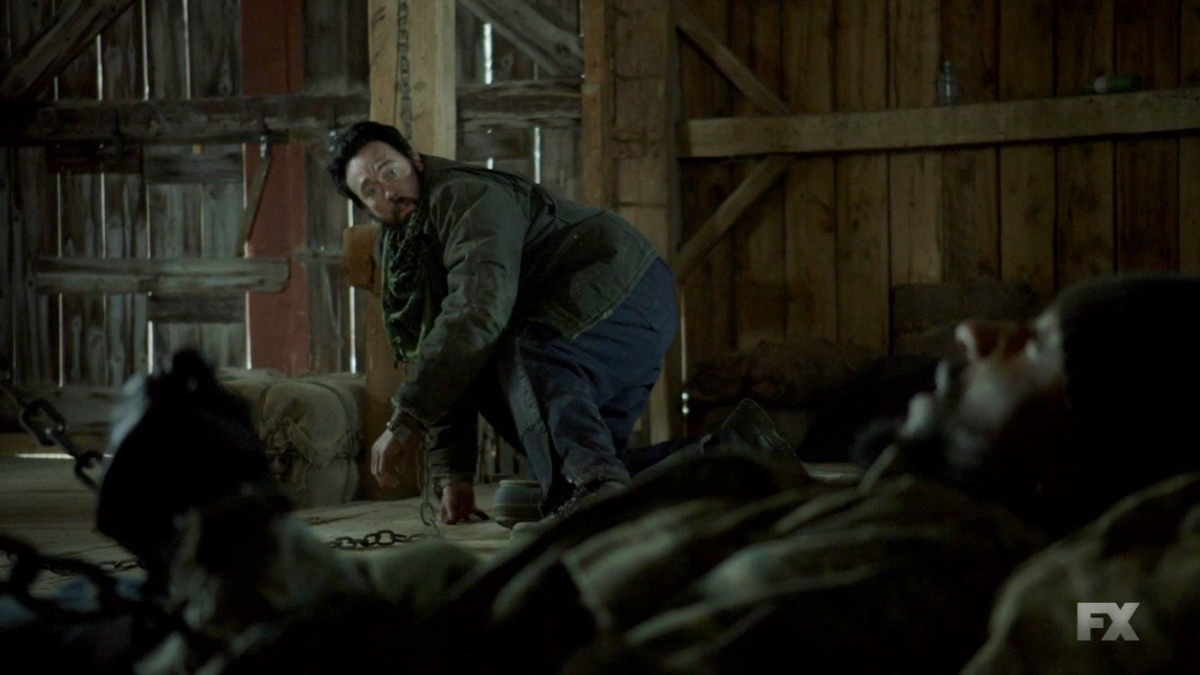 Charlotte is taken to a house full of women.  Fet is chained up in a barn with another fellow named Roman (K.C. Collins).  Fet is able to figure out by what Roman is wearing that he worked at a government missile silo. He asks Roman if they launched the missiles. Roman says they didn’t get the command before the world ended.

Fet asks for directions to the silo.  He wants a thermonuclear warhead.

At the Empire State Building, Zach is rocking out in his room.  He is visited by a cleaning girl. His feeler scares her and Zach hits the feeler to make it back down.  He starts helping the girl clean and asks if she will be working there now.

Eph patches up his new friend. He tells the woman how to treat the wound and tries to leave. The woman pulls a gun on him.  He tells her his mission is to stay alive and stay human.  He quickly takes the gun away from her.  She tells him to leave.

Roman calls for help in the barn. The women rush in to find out why. Fet is lying unconscious on the ground.  One of the women checks on him and he grabs her. Charlotte grabs a gun. Fet asks for the keys and unlocks himself.

Quinlan shows up to help and scares the women.  Fet introduces Quinlan to Roman and tells him about the missile silo. They all leave.

The fallout has happened and Dr. Goodweather has lost.  This is a good starting point after three seasons of the same thing.  It will be interesting to see what the Master has planned for those who fought against him.

So why did Eph go to Philadelphia? Why not stay and help Setrakian?  Why not stay and save Zach?  He has obviously met a sibling pair that is part of some sort of resistance. Eph has a lot of knowledge about the strigoi. He could do some serious damage if he wanted to.

There was no Dutch Velders or Gus Elizande.  We will find out what Dutch is up to soon. She was in the promos in a compromising position.  As for Gus, I have not see him in any of the promos or coming attractions.

This is the final season, so you know another big battle is coming.