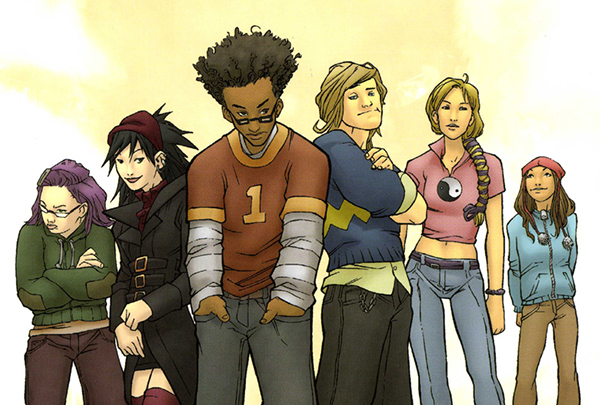 Deadline has broken the news that Runaways has their cast of teens! Set to air on Hulu as a drama, they’re currently working on a pilot. The showrunners are Josh Schwartz and Stephanie Savage, who you may know from their little show called Gossip Girl. So what is Runaways about? Well it’s about a group of teenagers who band together against a deadly threat – their parents. Penned by the brilliant Brian K Vaughn and art by Adrian Alphona, the series lasted 18 issues before being cancelled. But due to the popularity of the trades, the series came back for a few more years. Now who’s been cast to play these teens?

Rhezy Feliz will be playing Alex Wilder. Wilder is a “loud-and-proud nerd. Admittedly a bit of a loner, Alex spends much of his free time playing video games, but deep down, what he wants most is to reunite his group of childhood friends”. In the comics he’s the group’s leader and the only one without powers. Instead he is a child prodigy in strategy and logic.

Lyrica Okano will be playing Nico Minoru. In the show Minoru is said to be “is tough, intelligent, independent and embodies teenage angst. A budding “Wiccan,” Nico’s carefully crafted goth appearance isolates her from her peers and family, but maybe what she really needs is someone to talk to.” In the comics she was also a leader and is a sorceress like her parents and can cast nearly any spell imaginable with her staff.

Virginia Gardner will be playing Karolina Dean. In the show she’s a “model-perfect exterior, with a lot going on behind her professionally whitened smile, she is burdened by the lofty expectations and responsibilities put upon her by her parents. Underneath her veneer of privilege and perfection, Karolina is experiencing a newfound eagerness to explore her identity and pursue her own desires.” In the comics she finds out she’s an alien from another planet that absorbs solar energy that makes her hair into a rainbow.

Ariela Barer will be playing Gert Yorkes. In the show she’s “a purple-haired, bespectacled, contemporary riot grrrl. Never passing up a moment to stand on a soapbox, Gert sometimes wields her persona as a brash social justice warrior to mask her true feelings.” In the comics she’soften regarded as the most sarcastic and cynical. She has a telepathic link to a dinosaur and her family are time travelers.

Gregg Sulkin will be playing Chase Stein. In the show he’s “a lacrosse-playing, high school heartthrob. While many write him off as a dumb jock, Chase exhibits flashes of untapped brilliance in engineering, not unlike his wildly successful father.” In the comics Chase possesses the Fistigons, the world’s most powerful gauntlets he stole from his dad.

Allegra Acosta will be playing Molly Hernandez. “She’s the youngest and most innocent member of her friend group, who is known for her peppy positivity and a deep yearning to belong”. In the comics she’s a mutant. Molly’s mutant powers are superhuman strength and invulnerability and her innocence often serves as humor in the series, but she has demonstrated great insight at critical moments.

And there you have it! What do you think of the casting? Are you looking forward to the series? Let us know and be sure to check back here for more geeky news!