Home » Stuff We Like » The Pussycat With Claws: A Portrait of DON RICKLES

The Pussycat With Claws: A Portrait of DON RICKLES 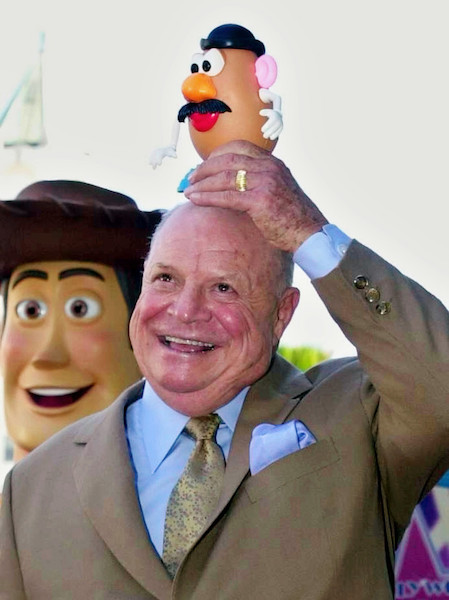 Throughout the last century, stand-up comedy has seen its share of legends. Men like Lenny Bruce, George Carlin and Richard Pryor have each defined the comedy of their generation. However, on April 6th, stand-up comedy lost one of its’ longest standing legends. While comedians around him have come and gone, Don Rickles reigned in stand-up comedy for sixty years. Thus, he established himself as a true legend of the art form.

The actor made his surprising film debut in the 1958 war movie, Run Silent Run Deep. He appeared opposite legends Clark Gable and Burt Lancaster. However, Rickles acting career actually began on TV in 1955. The popularity of television exploded during this period, and his work in the new medium lifted him to mainstream recognition . In fact, by the early 1960s, Rickles graced movie screens in the ultra-popular Beach Party franchise. While he largely played himself in the four films, Rickles had enough of a reputation that the movies gave him a block of time specifically for his comedy.

According to his New York Times obituary, Rickles was born in Queens just before the Great Depression. Like most of his generation, he served in World War II, before a brief foray in the insurance business convinced him to try his hand at comedy.

A comedian who’s humor revolved around audience interactions, Rickles’ career thrived  in the iconic lounge act and nightclub scene of the 1950s and 1960s. The New York Times reported in Rickles’ obituary that the comedian began playing the Sahara Hotel and Casino in the 1950s. According to the LA Times, his performances at the hotel became iconic by the 1960s. Las Vegas was the place to be at this time. Rickles would have been sharing marquees with legends like The Rat Pack, Bobby Darin  and Liberace.

This exposure propelled Rickles’ career into the late 1960s and 1970s. At the time, late night and variety shows were the go-to form of entertainment. While Rickles tried his hand at head-lining a few series, they never stuck. However, with men like Johnny Carson, Dean Martin and Ed Sullivan solidly employed throughout the late 1960s, Rickles had no trouble finding television work. In fact, his brand of comedy made him a staple on Dean Martin’s run of celebrity roasts during this period. Countless clips exist from Rickles’ television performances during this time. Often, he stands onstage mercilessly berating the A-list celebrities of the period as they laugh hysterically in the audience.

Watching these clips through a modern lens, it’s hard to ignore the lack of the political correctness we’ve become used to in contemporary culture. Furthermore, there is a lot which can be written about obscenity and risqué humor in comedy. However, when viewed through a historical lens, clips like the one above are fascinating. This footage from The Dean Martin Show comes from 1968. It brings some of the biggest stars in show-business together for what is one of the few remaining clips of Don Rickles doing (essentially) his nightclub act. The New York Times quoted another living legend Carl Reiner in saying, “that the biggest names in show business felt that ‘…If they hadn’t been insulted by Rickles, they weren’t with it’…”.

While his career ultimately hinged on the ever changing sensibilities of audiences, Rickles had a staying power which outlasted many of his contemporaries. He continued working on stage well after many people retire. In fact, Rickles performed as many as 75 shows a year well into his eighties. In 1995, he found gained a whole new generation of followers when he was cast as Mr. Potato Head in the Pixar animated classic, Toy Story. He continued in the role for both sequels ending with the 2010 film Toy Story 3. The actor’s credits list the upcoming Toy Story 4; however, sources can’t confirm that he had started recording on the film prior to his death.

Even until the last few years of his life, Don Rickles remained a force on stage. While his humor did not always stand the test of time relating to audience tastes, he kept working. Don Rickles not only continued doing what he did best, but also grew his audience base. This comedy legend will be greatly missed.