The Orville episode “Cupid’s Dagger” opens in the cantina. The crew grooves along as Kelly (Adrianne Palicki) stands on stage belting out some respectable karaoke. As she brings the song to a close, Bortus is the next up. “My Heart Will Go On” drifts out from the speakers. However, as Bortus (Peter Macon) takes a breath to sing, a page comes over the loudspeaker. The Orville is needed.

It seems the ship is being called in to broker some tricky peace talks. A war broke out between two alien species over ownership of a strange artifact. Not only is The Orville requested for its laboratory testing facilities, but also to broker covert peace talks. However, there’s one problem. Alara (Halston Sage) panics as she looks at the personal file of the forensic archaeologist coming aboard with the artifact… this isn’t good. 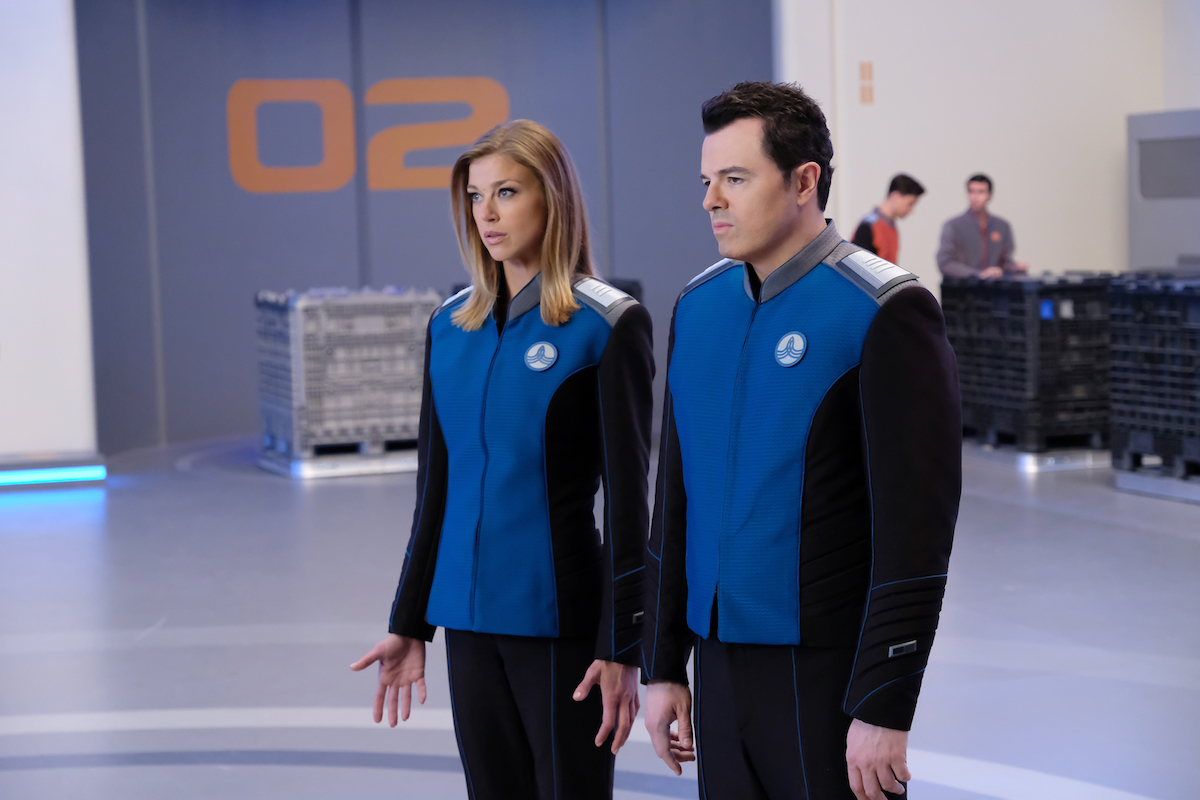 However, she isn’t in time. Kelly and Ed’s (Seth MacFarlane) faces drop as the blue skinned alien, Darulio (Rob Lowe) emerges from the docking shuttle. It seems this is the same alien with whom Kelly cheated on Ed. The moment is suitably awkward… especially for Ed. He exits in a huff, leaving a confused Kelly struggling to keep up.

Meanwhile, Claire (Penny Johnson Jerald) has her hands full with Yaphit (Norm MacDonald). It seems the anamorphic green blob has the hots for Dr. Finn. She interrupts his guitar solo to once again tell the blob to leave. However, as he dejectedly exits, she pauses to smell his flowers.

Later, Ed stands in the bridge. Things seem to be progressing well. However, there’s one small hiccup. Kelly isn’t there to meet the alien ambassadors. She’s supposed to take point on this. Ed quickly moves off to look for her. 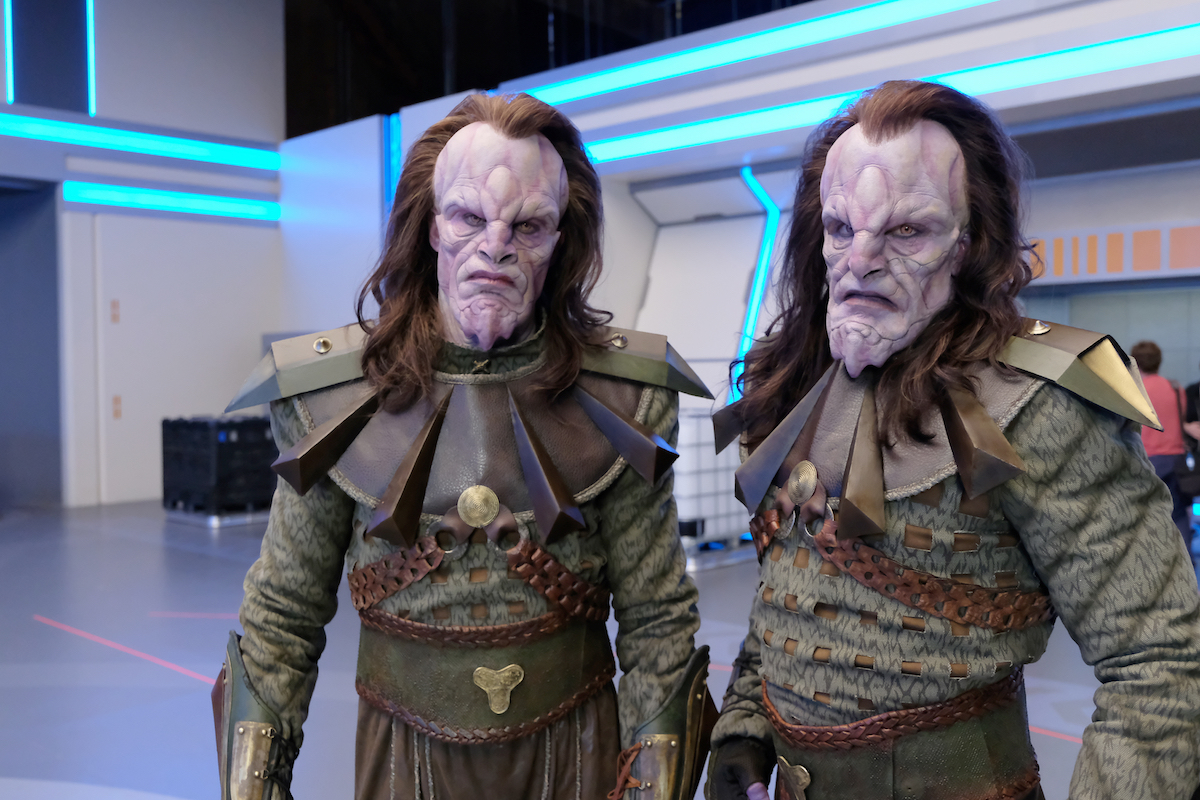 However, he gets more than he bargained for when he enters her quarters. Stepping into the bedroom, Kelly sits up in bed awkwardly… she’s not alone. Darulio sits up next to her, expelling fluid through his head awkwardly.

“You’re a sexual jihadist!” Ed shouts, storming down the hallway. How could his ex do this to him once again?

Later, Kelly sits with Alara in her quarters. They talk about Kelly’s romantic confusion. Suddenly, Kelly finds herself convinced she’s in love with Darulio. Could she have been so blinded by her panic over hurting Ed that she missed all the signs with Darulio? Those aqua colored eyes against that blue skin? How can you not love that?

At the same time, Ed storms into the lab, dead set on kicking the amorous archaeologist off the ship. However, as the men start talking, they hit it off immediately. Before long, they’re agreeing to get a drink after work. As Ed leaves the lab, he looks positively giddy. 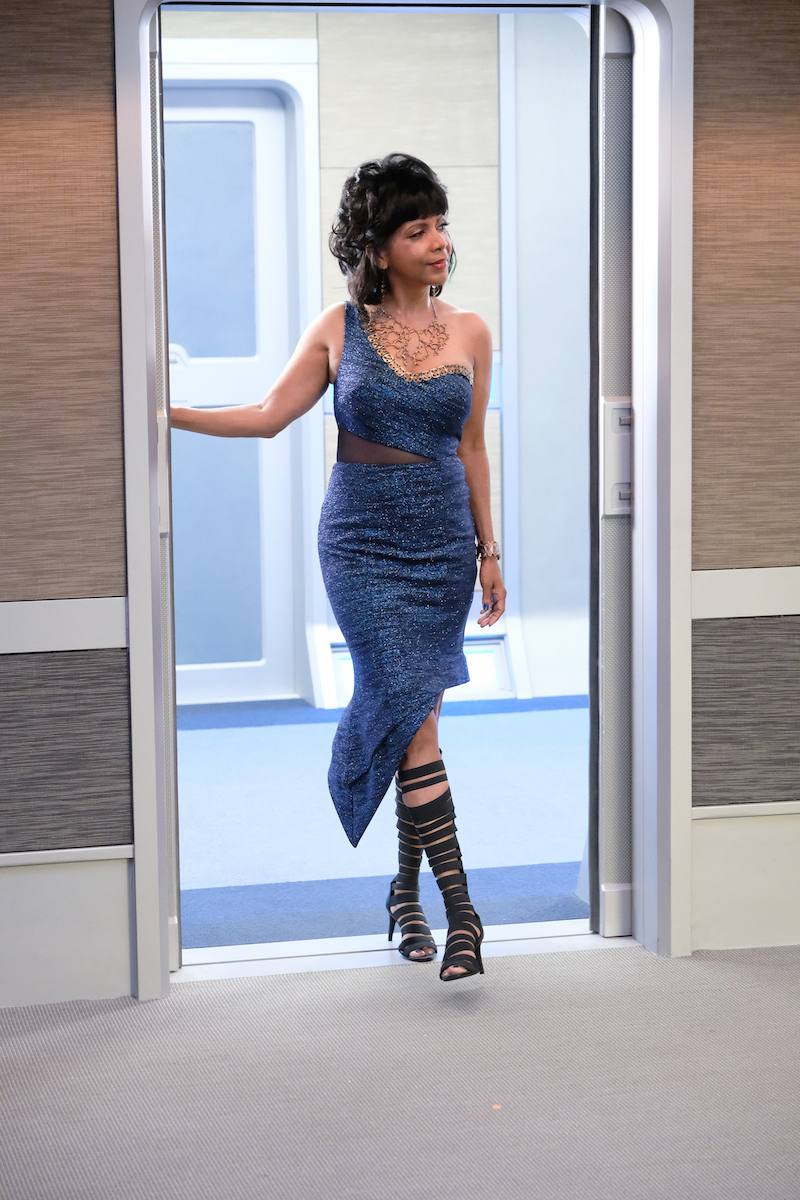 Meanwhile, it seems Claire’s had a change of heart. She prances up to Yaphit’s quarters, wearing a slinky dress. The blob barely restrains his glee as he lets her inside.

They look around the quarters, finally giving viewers an insight into his character. His species produces by mitosis. Even more interesting is his process of going to bed. How does an amorphous blob sleep? The scene ends with Yaphit and Claire exchanging a passionate kiss.

Later, Ed quickly gets ready for drinks as a confused Gordon (Scott Grimes) watches. Does Ed want to bang Darulio?

The moment grows awkward as Ed meets Darulio in the bar. He quickly learns that Kelly beat him there. The couple descend into a fight over the charismatic blue alien. However, the political scene on the ship is beginning to strain. The alien groups are beginning to get antsy. Furthermore, they find themselves growing even more uneasy due to Kelly and Ed being so difficult to track down.

Alara storms down the hall, trying to figure out whats’ going on. She turns into the sickbay and finds herself smack dab in the middle of another awkward situation… Claire and Yaphit making… gooey… gooey… love. What is going on here? She sends the blob back to his quarters, “The jelly wants what the jelly wants!”. 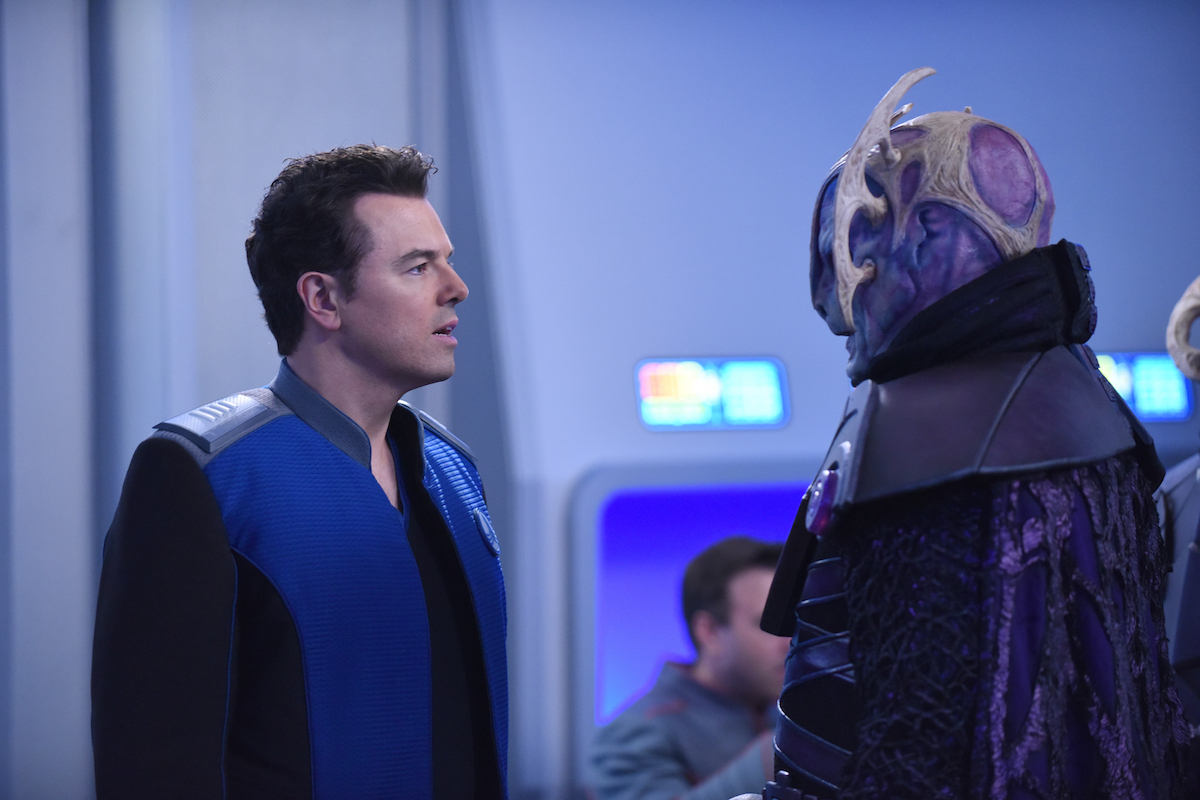 Meanwhile, Kelly and Ed find themselves one again butting heads over Darulio. However, Alara interrupts the moment. She manages to send the squabbling commanders away, and faces off with Darulio herself. He finally admits that his species excretes powerful pheromones once a month. The amorous chemicals are passed through touch, and he shook Ed and Kelly’s hand when he arrived. To make matters worse, he must have passed the pheromones to Yaphit as well. However, Darulio assures her that everything should pass in a few days.

However, the situation has already blown up into a state of war, and Ed and Kelly are nowhere to be found. Bortus pages Ed’s quarters, but the disinterested captain is reclining in bed next to Darulio. He looks over, “The only thing I’m captain of right now, is your taut physique. Now get over here”. Meanwhile, Kelly sobs over a chocolate cupcake in her quarters. 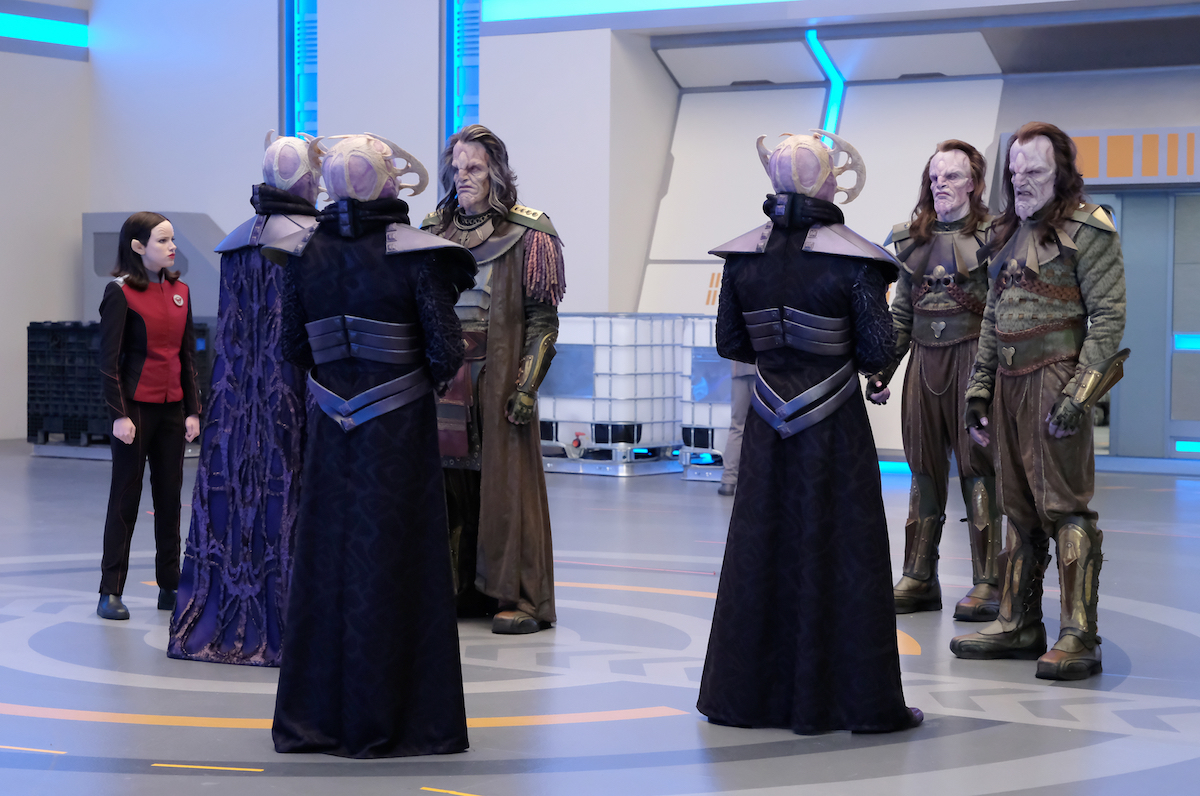 Meanwhile, Bortus is in firm control of the bridge as the sides begin firing on each other. However, Alara has an idea… she disappears into the conference room with both ambassadors as well Darulio. Suddenly, the men emerge from the locked room clutching each others hands. One joyful transmission to the battling ships averts the state of war.  They are in love!

As the episode comes to a close, everyone recovers from their lovesickness. While the two warring factions will soon realize they aren’t truly in love, the results of the scientific tests are back. It seems Darulio’s tests actually revealed the two groups are related by a common ancestor. The two sides will finally unite.

However, feelings between Ed and Kelly remain tense. As Darulio moves to leave the room, Kelly stops him. Could he have been in heat when she initially slept with him? Darulio smirks, “Could be”. All at once, things between Kelly and Ed seem to be a little better. Perhaps they can emerge from their drama once again.

Read our previous recaps of The Orville, here.