DISCLAIMER: This recap of The Orville: New Horizons episode “Shadow Realms” has spoilers. Engage quantum drive, and proceed at your peril.

Welcome back, crewmembers of The Orville! “Shadow Realms” exudes horror movie vibes, and I’m here for it. While this isn’t The Orville‘s first horror-filled rodeo, I’m always tickled when a hard sci-fi series genre bends in this manner. That said, The Orville: New Horizons seems devoid of the show’s trademark humor this go-round, and I’m not a massive fan of that. The comedic aspects are part of what makes this series stand out.

“Shadow Realms” delves deeper into The Orville’s intricate mythology while displaying ethereal visuals and stunning makeup. It pays homage to the hallmarks of sci-fi, both franchises and tropes alike.

Ready to dig into “Shadow Realms”? Let’s get to it.

The hope is the Krill will grant Unions access to the Naklav Sector, on the other side of Krill space. No Union ship has ever traversed through that region of space — until now.

Claire appears to harbor reservations but chalks it up to exhaustion.

Later, Vice Admiral Christie (James Read), a.k.a. Paul, visits Claire for a brief reunion after 25 years away. We learn that they used to be married, but things seemingly ended on a sour note based on the admiral’s apology. Claire urges him to focus on his task, the Krill negotiations, and leave the past in the past.

Next, The Orville crew mingles with the Krill for a pre-negotiation party. Mercer expresses his hope that this temporary alliance morphs into a permanent one. However, the Krill reps shoot down any hope, asserting that “once the Kaylon are crushed, the alliance will be dissolved.” Way to not be a team player.

Meanwhile, Grayson and Claire leave the get-together to embark on an alcohol-fueled side quest. They dish on marriages, and Claire reveals why she parted ways with Paul. He wanted a “bedwarmer,” whereas she longed for a partner. After giving him an ultimatum, Paul left. Based on their earlier interaction, it seems Paul might regret his decision from decades ago.

Later, Mercer, Grayson and Paul sit at the negotiating table with the Krill representatives. They’re allowing our crew to explore the Naklav Sector but under certain conditions. They must adhere to the course set by the Krill, and all deviations are forbidden.

Additionally, the Krill will install a tracking beacon to monitor The Orville’s movements, to which Grayson objects. However, Mercer and Paul brush off her objections.

The Krill want access to an uninhabited planet in Union space, the third planet in the Obrall system, because it’s rich in harcarium, which they utilize for their propulsion systems.

After Paul mentions advice regarding the navigation of the Kalarr Expanse, the Krill reveal the Anhkana (essentially the Krill Bible) warns of “Shadow Realms” in the Expanse, wherein demons dwell, waiting to convert good people to the side of evil. I can’t help but feel this is a reference to The Expanse, which makes me giddy with joy.

The Krill reps won’t stop our crew from exploring the uncharted reaches of the Expanse, but they won’t come calling if The Orville needs assistance. Basically, “we warned you, so don’t knock.”

Later, after the Krill representatives depart, Mercer, Grayson and Paul brief Admiral Halsey (Victor Garber) regarding the success of the Krill negotiations.

Next, Paul finds Claire sitting in a swanky restaurant while working. Paul reveals he never parted with his wedding band, always carrying it with him as a good luck charm. Paul plans to join their crew on the exploratory mission to the Naklav Sector.

Before embarking on a journey to uncharted space, Mercer offers an impromptu ship-wide pep talk, encouraging his team to put their best foot forward. He ends his speech with, “May the force be with you.” No one remarks on how Mercer plucked this phrase from a particular galaxy far, far away, so perhaps Star Wars doesn’t exist in this universe.

Meanwhile, Paul and Isaac meet for the first time. Paul asks for advice about how to woo Claire, and amid Isaac’s laundry list of Claire’s likes, the Kaylon mentions he’s still not over our good doctor. It appears Paul has competition!

Our crew reaches the Kalarr Expanse, which Isaac notes “appears to be almost entirely empty space.” They encounter a creepy-looking space station that’s emitting a distress signal. Mercer takes a small team to board the station.

RELATED: Catch up on all the sci-fi goodness with The Orville recaps!

While exploring the vast interior of the station, LaMarr and Keyali find the source of the distress signal, while Mercer and Paul discover what appears to be organic sources of energy in pods of sorts. One opens up in front of Paul. Our group concludes the station is a living organism but can’t pinpoint why it sent a distress signal.

Once back on The Orville, everyone brainstorms the next move. Suddenly, Paul falls to the floor, overtaken by seizures. Claire whisks him away to the sick bay while Mercer, LaMarr and Keyali return to the peculiar space station to collect more data.

Back on the ship, Claire examines Paul, learning that whatever afflicted the admiral is rewriting his DNA at a rapid rate. LaMarr discovers the distress signal transformed into a homing beacon while Mercer and Keyali scan the pod that seemingly infected Paul.

We see Paul’s flesh looks rotten, with orb-like, empty black eyes forming on his face. Claire urges him to hold fast to hope. He’s going to get better (maybe).

Then, Nurse Park (Gavin Lee) notices Paul has disappeared. Suddenly, a mysterious force bars access to the vessel and shuts everything down. Nurse Park leaves the sick bay to explore a strange, inexplicable noise. The call is coming from inside the house! You’re in danger, girl!

Mercer, LaMarr and Keyali return to The Orville, reuniting with our main crew on the bridge. Grayson has no idea what’s happening or why everything shut down.

Meanwhile, Marcus (BJ Tanner) and Ty (Kai Di’Nilo Wener) try to find their mother, Claire. Ty persuades his older brother to return to their quarters. The boys find a creature lurking outside the mess hall. Said creature scales the walls while the boys duck behind a table and chairs.

A crewmember finds the boys and vows to bring them to Claire. Unfortunately, the alien leaps onto said crewmember and sprays a corrosive liquid on the man’s face. He transforms instantly into the same species as the alien. Fun times!

Marcus and Ty run into Claire, who ushers them to the bridge. The kids describe what they say. It appears Paul transformed into an unknown extraterrestrial species, overrode The Orville’s controls and started infecting crewmembers. Who knows how many of these creatures/former humans roam the ship. Claire believes the liquid is this species’ way of “reproducing,” or hijacking other lifeforms to spawn themselves. It’s like a parasite that rewrites DNA entirely.

LaMarr and Keyali encounter a few aliens, with the latter full-on brawling with three of them by herself. Isaac saves LaMarr while Keyali produces an unconscious alien for Claire to study. She believes she can create a synthetic virus to curb the transformation process for the aliens, hurting them enough so they’ll want to leave the vessel. It might give our crew the sniffles, though; thankfully, Bortus is prepared for this. Claire believes they can disperse it in “aerosolized form” throughout the ship.

Meanwhile, Mercer and the others on the bridge learn the homing beacon on the living space station signaled a formidable ship, perhaps containing the same alien species that owns the station. 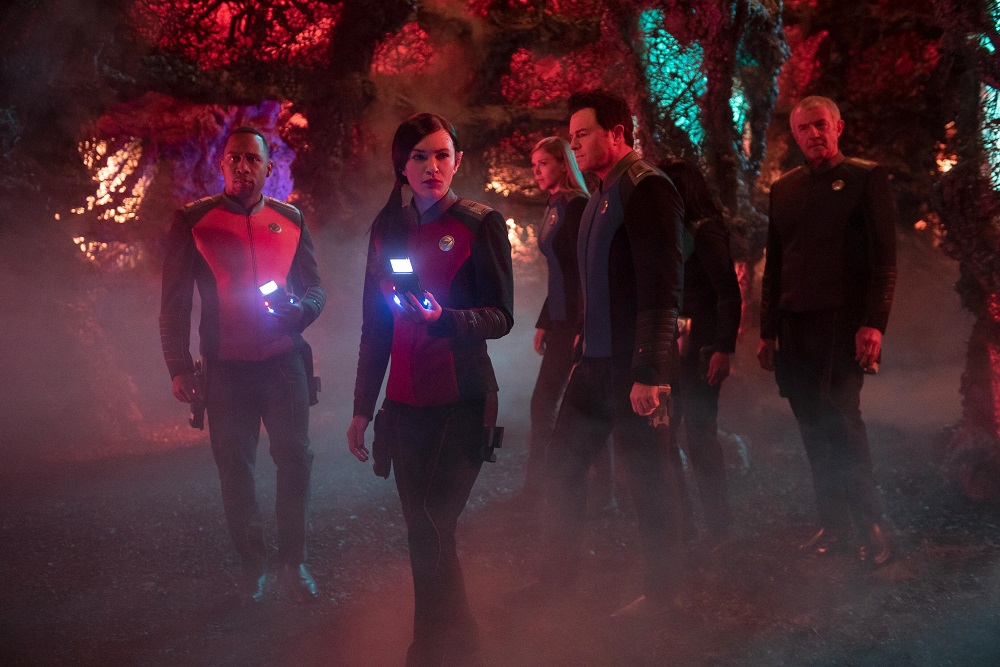 Claire reveals her plan to Mercer, who looks dubious. Claire tries to appeal to Paul after asking Keyali to track him by the rare stone in his wedding band. Unfortunately, Paul “is no more,” but Claire attempts to persuade him and the other aliens to leave. Otherwise, this virus could prove deadly. After some prodding, Paul and his new extraterrestrial pals agree to depart The Orville, but “not forever.” Eventually, this species wishes to convert every lifeform in its path.

Later, Isaac sits with Claire for dinner. They catch up, and it seems like Isaac is getting the second chance he wants. Love is in the air (and not as the product of an aerosolized synthetic virus)!

Overall, The Orville: New Horizons lives up to its name — it explores, well, new horizons. My butt’s fastened securely on this train, and I’m intrigued to see where this journey takes us.

What other creatures do you think our crew will find amid their exploration? Will those strange aliens return? Join me next week while I recap The Orville: New Horizons, only on Geek Girl Authority.