THE MAN IN THE HIGH CASTLE Recap: (S02E10) Fallout 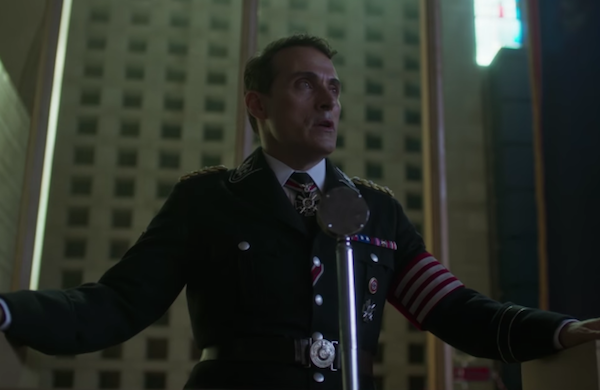 “Fallout” opens with a caption, December 11, 1945. Judy Garland’s version of “Have Yourself a Merry Little Christmas” drifts from the background as John (Rufus Sewell) and Helen (Chelah Horsdal) enter a small apartment. It’s a flashback, and Helen’s heavily pregnant with Thomas. Suddenly, there’s a blinding flash of light outside as a mushroom cloud expands over the city. Looking out the window, Helen asks, “What is that?”. John stares wide-eyed at the cloud as he responds, “I think the Nazis’ just hit Washington”.

Meanwhile, the action returns to the scene of the bombing. Bodies fill the streets.  Nearby, a medical team works frantically inside a trauma center. Inspector Kido (Joel de la Fuente) sits inside a medical tent, having himself patched up. There’s a dazed look on his face. It turns out, General Onada (Tzi Ma) and the other Chiefs were killed in the blast. Kido is now the ranking officer on site.

At the same time, Trade Minister Tagomi (Cary-Hiroyuki Tagawa) wanders through the rubble, a similar dazed expression on his face. Kido moves over to Tagomi. Together, the two men look at the bodies lining the streets.

Later, they move inside. Huddled inside of an office, Tagomi starts his film. Kido watches silently as the footage of the H-Bomb explosion plays in front of him.

Meanwhile, the Nazi’s find themselves in restrained panic mode as they meet in their Berlin War Room. There’s a feeling of anxiousness as it becomes clear, they’re at war with Japan. Martin (Sebastian Roche) coldly details the stages of the conflict. Tokyo will be destroyed in the first round. Soon after, the Nazis will roll out a mighty show of force in cities across the Pacific States and Asia. However, they must also be ready for Japanese attacks on Chicago and New York. The losses will be in the hundreds of thousands, but the Americans are “Acceptable losses”.

Afterwards, Joe (Luke Kleintank) and Martin talk quietly on their walk back to the Führer’s office. Joe’s stunned, he finds himself unable to comprehend the possible loss of life in his head. Martin looks at his son; in fact, this is their duty as the “Master Race”. They have the ability to end man’s proclivity towards war. Joe looks at Martin confused, “By killing millions of people?”. It will be a terrible war, but Martin vows it will be the last one. “Imagine what humanity will be able to achieve”.

Back in the Reich, Thomas pulls a heavy book off a shelf. As the boy flips through the pages, he sees pictures of sick and malnourished children. Helen suddenly bursts in, “We’ve been worried sick!”.

Later, John hurries into the house. With both his parents in front of him, Thomas (Quinn Lord) finally confronts them. He wants to know what is wrong with him. John leans into his son and tells him the truth. In fact, Thomas has a form of muscular dystrophy, and there’s no cure. Helen rushes to Thomas’ side, tears spilling from her eyes. Thomas looks at the book in his hand, “But I’m defective”. John looks at his son. Suddenly, he’s not a Nazi, but Thomas’ father. His voice is sure as he continues, “It’s very scary, but I promise you, it’s going to be okay. You’re going to be okay”. Unfortunately, the tender moment is interrupted by a phone call.

Picking up the phone, it’s the an officer from the airport. The man reports that Inspector Kido has been arrested in the Reich. When he was confronted, Kido reported that he was there to see Smith. John’s expression is unreadable as he sends a car for Kido.

Meanwhile, Juliana (Alexa Davalos) enters the jazz club angrily. The Resistance has learned that the SS is after Juliana, and they’re preparing to move her to a safe house. However, they aren’t happy. It turns out that George (Tate Donovan) has also been monitoring Juliana’s building, and he knows everything about her conversation with Thomas. While Juliana insists that they “leave him the hell out of this”, George is insistent. In fact, Thomas’ illness is exactly the silver bullet the Resistance needed to bring down the powerful Nazi. Suddenly, George rushes from the club.

Juliana picks up an envelope, opening the paper, it is a picture of Karen. Silently, a man materializes from the darkness, winding a garrote around Juliana’s neck. There is a struggle, but she’s quickly able to extricate herself. She sprints out the door, and runs straight into George, who wears a Nazi disguise. Juliana grows hysterical. She’s done with the Resistance, but she wants her film. Fed up, George storms off once again. He declares he’s done helping her. With her desperation growing, Juliana shoots him. George slumps to the ground dead. Suddenly, things become clear, the Man in the High Castle’s clip is coming true. Terrified, Juliana runs away.

Later, Joe and Nicole (Bella Heathcote) lean on each other for support. As the political conversation quiets, their sexual tension overwhelms them and they end up in the bedroom.

Back in the Reich, Inspector Kido and Obergruppenührer Smith stand in his living room, watching the footage of the H-Bomb test. John is stunned, “Is it one of his? The Man in the High Castle…”. lnspector Kido answers, slowly and matter-of-factly. He insists that the Japanese didn’t kill the Führer, and he doesn’t want their countries to go to war over a lie.

Unfortunately, John has no choice, but to go straight into the metaphorical lion’s den with this information. He must go to Berlin. As he returns to the house, he hopes to leave on a peaceful note with Helen. However, his wife is in no mood for peace. She’s distraught about Thomas, and lashes out at her husband. As her tirade finally comes to an end, his voice is quiet as he leaves the room, “I love you”.

Later, Martin stands at his podium, preparing for his upcoming speech. He looks authoritative as he readies to declare war on the Japanese. There will be over 150,000 people in attendance, but Martin is unflinching, “Let them come”.

Meanwhile, Smith appears on Joe’s doorstep. He pulls the film out of his bag, presenting it to Joe. However, Joe is understandably skeptical, “Why should I trust you?”. While they talk, John freely admits his guilt. In fact, he knew everything about Joe, but kept the young man in the dark. His hope was that one day he could cash in on his background. Suddenly, John mentions Joe’s achilles heel, Julianna. Despite everything Joe knew, Juliana is alive.

As Martin continues his preparation, Joe enters with John. While the troops attempt to arrest Smith, Joe stops them. They fall into a stunned silence while the film plays in front of them.

The drama builds to a crescendo as Martin stands over Germany’s weapons controls, while Joe begs him to think about his actions. At the same time, Smith pulls Himmler (Kenneth Tigar) aside. Quietly, Smith tells the older Nazi everything. He describes the gigantic conspiracy, all orchestrated by Martin. Not only did he plan the death of the Führer, but the attack on the Japanese Crown Prince as well. This was all a ploy for him to take power. While Martin and Joe are lead off in restraints, Himmler looks to Smith, “Follow me”. As the door opens, they step out onto the podium.

John looks out over the hundred thousand people filling the room as Himmler pronounces him a hero to the Reich. John steps up as the entire room salutes him with a unanimous “Sieg Heil.” The Nazi’s have seemingly triumphed.

Meanwhile, Juliana finds herself in the neutral zone. While she listens to a news report detailing what we have just seen, she burns the film.

At the same time, John is lead downstairs, where he sees reels of him. He looks around, trying to figure out what he’s seeing. Unbenownst to him, Helen cries on the street frantically at home as Thomas is led off by the Reich Health Department. Thomas is stoic, and has seemingly sacrificed himself to protect his family.

Once again, Juliana comes face to face with the Man in the High Castle (Stephen Root). While they talk, the truth begins to emerge. In fact, the man knew everything. This was his plan. It seems that everything revolves around Juliana. He tells her about the films. She is in them. However,  everyone else changes character in the films, except for Juliana. She is always there, always just like herself. He tells her that he orchestrated George’s murder to avoid war. This was the only way to keep Dixon from stopping Smith. As Juliana’s overwhelmed with emotion, the Man in the High Castle takes her hand, “Come with me”. He leads her through a door onto a picturesque dock. There’s a girl standing there, as she turns around Juliana gasps. It’s her sister.

Finally, Tagomi stands up from his meditation as there is a knock at the door. Stepping outside, it’s Lem (Rick Worthy). “I’m a friend of Juliana Crane,” he says, he holds a container of film.

Viewers with an Amazon Prime subscription can watch the first two seasons of The Man in the High Castle.