THE MAN IN THE HIGH CASTLE Recap: (S02E09) Detonation 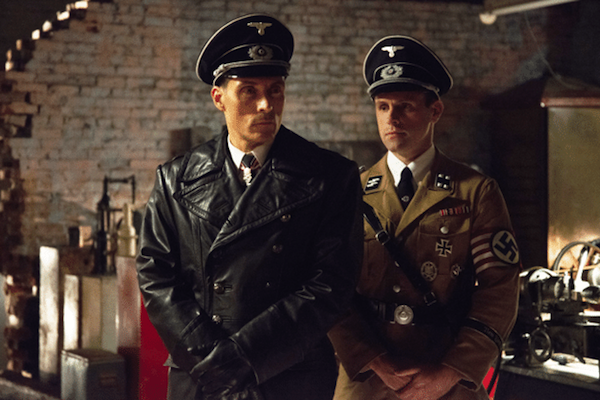 As “Detonation” opens, Childan (Brennan Brown) wanders around his store, seemingly in a daze. Adjusting merchandise in a display case, he catches sight of a reflection in the door. He starts, dropping the glass clasped in his hand. Hearing the noise, Frank (Rupert Evans) emerges from the back of the store. Seeing him, Childan speaks up, “I can’t get it out of my head. The gun in my face at the club”. As the two men talk, Frank finally realizes that all did not go well at the Yakuza drop. He quickly goes to meet Ed (DJ Qualls).

Meanwhile, Nobuske Tagomi (Cary-Hiroyuki Tagawa) sits at the back of his living room. In front of  him, his family projects footage of an atom bomb explosion. The feeling of dread hangs heavily in the air.

Back in the Reich, Juliana (Alexa Davalos) goes to fetch Henry (Kurt Evans). She’s incredibly convincing as she tells him that Lucy collapsed, and was taken to the hospital. As they turn a corner, George (Tate Donovan) steps out from the shadows. There’s a gun in his hand. In fact, the Resistance has Lucy in custody, and threatens to kill her if Henry doesn’t obey. When Henry doesn’t listen, George tells him do do it for his child. Juliana barely represses her emotion, as she chimes in, “She didn’t want to tell you until she was sure”.

Juliana returns home and flips on the television. An episode of “American Reich” has just started, but is quickly interrupted as the news station cuts in. It turns out, it’s Henry. “For the past few days, you’ve been told the Führer is alive and well. The truth is that Adolf Hitler died last night in Berlin…”. There’s a squabble off camera, followed by two quick gunshots. Henry crumbles to the ground, dead.

Later, Obergruppenführer Smith (Rufus Sewell) gets an update from his assistant. While they know the Resistance instigated the televised confession, unfortunately the Nazi’s aren’t sure of the details. Until everything blows over, the Reich’s statement is that the story is only terrorist propaganda. Hitler is alive and well. However, as Smith receives a call from the Chancellor (Sebastian Roche), he stiffens up. Berlin is watching him carefully.

Meanwhile, the Resistance in the Pacific States works quickly to organize their plan. However, Frank’s mind is other places. He thinks back to his conversation with Ed. Suddenly, he’s antsy. Why would the Kempeitai spare Ed? As they talk, Ed’s emotion brims over as he tells Frank everything. Inspector Kido (Joel de la Fuente) threatened to kill everyone Ed knew. Ed wanted to protect Frank. He didn’t want anyone to get hurt.

While they struggle with the bombing plan, Frank stands up. He suggests that he should be the bomber. He’s seen himself die; and after the death of his sister, he’s not afraid to die himself.

Later, everything and everyone seems to stop as Martin gives a public statement. Posed stoically in front of two swasticas, he announces that the Führer has died. In fact, not only has he died, but he was poisoned. This is an act of war.

At the same time, Juliana opens the door to see a rattled Thomas (Quinn Lord) standing in front of her. The boy knows something is wrong with him, and wants to know more about the day of his episode. Emotion brims in the boy’s face as he continues. It turns out, he’s looked up his symptoms in the library and he’s becoming increasingly aware that he has a “defect”. Juliana, not sure what to tell him, sends Thomas home to his parents.

Later, Tagomi sits in the house. He smiles as his children play with his grandchild. As he watches, suddenly he knows what he must do. After a tearful goodbye with Juliana, he takes a canister of film in his hands, and in the blink of an eye, he’s back in his reality.

Frank returns to the apartment. He seems forlorn at best, while Childan and Ed are busy packing for the neutral zone. As Ed corners Frank, the two exchange words. It turns out, Frank isn’t coming with them. However, this isn’t what Ed wants to hear. The emotion grows between them as Ed tells Frank that he doesn’t need the Resistance to be his family. He has family right here. Unfortunately, Frank has his mind made up. He hands his share of the cufflink sale back to Ed, telling him, “I’m not going to need it”.

Meanwhile, Tagomi meets with the Finance Minister (Russell Jung). It turns out, the man is also a traveler from the other world. His arms are seriously burned from being in Nagasaki when the city was bombed. While he was in the hospital he learned that not only could he escape his pain by coming to this world, but his family also had survived here.

At the same time, the Nazi’s stand huddled around a tactical map. It seems that in the wake of the Führer’s death, the Resistance has emboldened. They are showing a level of activity and coordination unseen since the end of the war. Smith seems unconcerned, “We put it down then, we’ll put it down now”.

Suddenly, John receives a message to come to the video control room. He’s nervous, as he puts on a pair of headphones. The young officer called him directly with the information about his son and Juliana. Afterwards, John anxiously calls home, but Helen (Chelah Horsdal) hasn’t seen Thomas.

Across the country, the Resistance finalizes the plans for the bombing. While Frank seems to be set and ready to go, there’s a flaw to the course of events. Frank is suddenly shaky when he learns that part of it involves driving Sarah (Cara Mitsuko) into the building. The plan involves Frank pretending to be Sarah’s chauffeur when she’s called to the building to be the General’s “niece”. However, he refuses to risk killing her, but there are few other options available.

Pulling up to the gate, nothing goes quite as planned. Frank and Sarah wait for an excruciatingly long time as the guards check her identity. In fact, there’s no record of General Onada (Tzi Ma) requesting a girl. However, Sarah’s quick thinking intimidates the guard, who finally allows them to enter. As they pull into the parking garage, Frank nearly runs over a young mother and her daughter who are entering the building. However, this doesn’t deter them for long, and the plan continues.

Sarah and Frank stop at a checkpoint; however, this is just as Chief Inspector Kido comes down the stairs. The Inspector instantly recognizes Frank, and all their cover is blow. Quickly, Frank and Sarah both pull out their guns. They are firing as the bomb explodes.

As the smoke clears, Kido sits up and puts on his glasses. His Sergeant (Lee Shorten) lays, seemingly dead, feet away from him. Looking around, there’s a pit where Frank stood.

A dreamy version of “Dream a Little Dream” plays as a bus drives over the Golden Gate bridge. Childan and Ed look out the window at the growing smoke plume over the city.