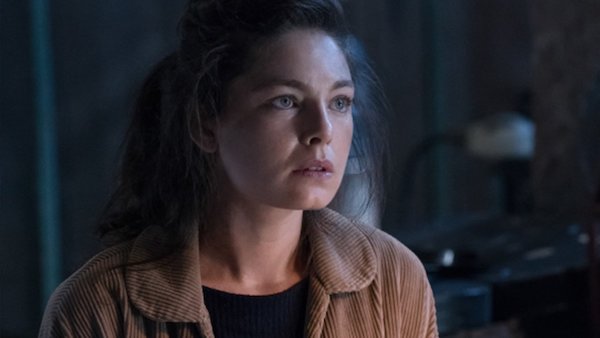 Alexa Davalos in The Man in the High Castle

As “Loose Lips” opens, Helen (Chelah Horsdal) and John (Rufus Sewell) sit in the bedroom; the news of the Führer’s condition has them both on-edge. As he dresses, John tells her, “We’re going to have to be ready for anything”. With a quick peck, he leaves her alone. The worry hangs heavily on her face.

Meanwhile, Joe (Luke Kleintank) and Martin (Sebastian Roche) enjoy a pleasant breakfast in Berlin. The two men are finally getting along. As Martin informs Joe of the Reich’s goals, the subject of Nicole (Bella Heathcote) suddenly comes up. In response, Joe reflects on his time with Juliana (Alexa Davalos). Emotion flashes across Joe’s face as he tells Martin that she died for him. Father and Son share a somber toast, “To the women we lost”. The moment is halted by a platoon of S.S. soldiers. As they burst in, the troops refuse to give them any information, but eventually relent when Martin insists that Joe must be allowed to accompany him.

Joe looks around as they are led into a spacious and elegant office. Martin tells Joe where they are. This is the Führer’s office. Unfortunately, Joe can go no farther than the waiting room. He’s forced to sit outside and watch as the men give a Nazi salut to an unseen figure before the door closes.

Later, Joe is finally allowed inside. Entering the office, Joe meets Heinrich Himmler (Kenneth Tiger). The powerful Nazi introduces himself as Joe’s Godfather. As the little man puts on his jacket, he smiles and tells Joe, “I look forward to seeing more of you” before he quickly exits.

Once they are alone, Martin quietly mentions that the Führer is in a coma, and the prognosis isn’t good. However, until the party meets to appoint a new successor, Martin must fill the role. While they talk, Martin informs Joe that this isn’t an honor. Rather, his promotion is something to be feared. He tells Joe a story. When the Führer fell ill years before, Hermann Göering appointed himself Chancellor. However, when Hitler recovered, he had the Nazi official, and his entire family killed. He asks Joe to leave Berlin, for his own protection.

Meanwhile, as Juliana vacuums her apartment, it turns out she should be nervous about the sinister air grate above her head. The scene cuts to a control room across town, where a young Nazi officer watches a room full of cameras. Each one monitors people in their apartment through their air grate. Suddenly, the room is plunged into darkness as there’s a power outage.

Juliana jumps as there’s a knock at her door. It’s John. He paces the room ominously as he makes her sit down. He is anxious to learn about The Man in the High Castle. Juliana tells him the truth. The man wanted to know about the film she gave to Joe. Tears build in her eyes as she recounts what she saw in the film. However, she insists that this is all she knows. Seemingly satisfied, John leaves and like clockwork, all the power returns to the room.

Later, Juliana checks in with George (Tate Donovan). Every fiber of her being wants to run, but George stops her. She’s close to something. They can’t stop now.

Juliana pays a calculated visit to Helen, and before long Juliana’s sitting down to a glass of wine with Helen and Lucy (Emily Holmes). While Juliana does her best to pry into what Lucy might know, Helen quickly quashes the subject. Rather, the topic of conversation turns to child-rearing and a woman’s role in the Reich. However, as Helen gets a call from John, she leaves. Sensing an opportunity, Lucy and Juliana turn on the television. Archived footage of Hitler plays on the news. Something isn’t right.

Juliana immediately finds a payphone and calls George. She’s bursting with the information they need, but she has startled him. She isn’t supposed to call on this number. They’ll have to meet later, in a secure location.

Later that night, George meets Juliana in an underground jazz club. Sitting down, she tells him that at Hitler is sick. When he isn’t surprised, Juliana continues. Not only have the news stations been given old footage, nothing is as it seems. They are lying to cover the severity of the Führer’s illness. Suddenly, the Resistance is interested. George tells Juliana that Hitler’s death is a trigger. It is time for an uprising. However, Juliana finds herself uneasy. She can’t help but think, did she just start the end of days? Panicked, Juliana calls her family and begs them to leave. As she’s about to hang up, she asks that they tell Frank as well.

Meanwhile, Childan (Brennan Brown) and Ed (DJ Qualls) are suddenly hitting it off. Their last forgery effort was a resounding success, and Childan wants them to continue their partnership. However, the planning comes to a halt as Frank (Rupert Evans) enters. He’s desperate for Ed’s help, but the Resistance is a sticky issue between the two men. Their relationship is icy at best. Childan reenters, Frank has a visitor.

As Frank steps into the store, it’s Arnold (Daniel Roebuck). He tells Frank that the family is leaving town. Frank barely holds his composure in check as the ghost of Juliana once again appears in his life. He’s done everything he can to purge her from his mind. Arnold tells Frank that Juliana gave him all of this information, and contrary to what Frank thinks, she’s not a traitor.

Back in Berlin, Joe suddenly bursts into his Father’s office. He has decided. He’s not leaving. He speaks quickly, as he tells Martin why. He wants to feel like his life matters. “Maybe it can. Please don’t send me away”.

As the episode builds towards its’ conclusion, Joe swears allegiance to the Reich and the Führer. Meanwhile,  group of Nazi’s are gathered around Hitler’s bedside as the aging man clings to life. His heart monitor flatlines. Hitler has died.

Later that night, Martin stares out a window overlooking the city of Berlin. Statues to the Nazi regime rise majestically from the ground. As he looks to the camera, his expression is suddenly menacing.