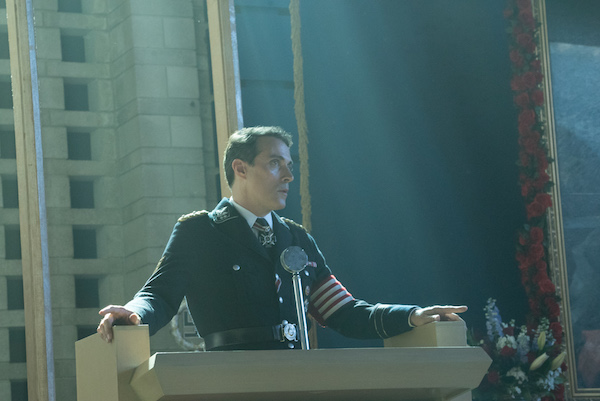 As this episode of The Man in The High Castle opens, Frank (Rupert Evans) sits at dinner with his family. We learned in season one, Frank’s family is Jewish. As one of his nephews asks a question about the Pharaoh, there’s a sudden rumbling in the ceiling. A hose drops from the ceiling, and gas spills into the room. Overwhelmed with panic, Frank climbs onto the table, putting himself between the gas and his family. Suddenly, he wakes in a cold sweat. It was all a dream.

Putting on his glasses, Frank finds himself back at his desk. He stands up, and walks further into the apartment.

John sits in the living room, his head in his hands. His eyes are glued to family photographs in front of him. He puffs on a cigarette, as his wife prepares herself for the day.

Later, Frank walks into an auto body shop. A man (Michael Hogan) kneels in the center of the room. As he pushes himself to his feet, Frank recognizes him. He is the Reverend who spoke at Karen’s service. The two men talk until Gary (Callum Keith Rennie) and Sarah (Cara Mitsuko) arrive.

Sitting down, Gary informs them that the Resistance is finally ready to act. In fact, they’re finally going to make use of the explosives Frank and Ed obtained. Their plan is to divide it up to make smaller bombs. Their aim is to assassinate high ranking Japanese officials. Furthermore, Sarah and Frank are in charge of working out where to plant the bombs.

Meanwhile, Juliana (Alexa Davalos) helps Lucy (Emily Holmes) arrange the flowers for Dr. Adler’s funeral. The women laugh giddily as they work, but stop abruptly as the other women enter. As Juliana turns to leave, Helen stops her. Even though Juliana wasn’t invited to the funeral, Helen asks her to attend. They need to support Alice Adler (Gillian Barber).

A picture of the Führer hangs high over the service. However, as  a cleric speaks from the pulpit, heaviness hangs over Dr. Adler’s funeral. John sits near the front, a haunted expression hangs on his face. He’s responsible for delivering the eulogy.

Later, Childan (Brennan Brown) finally has the finished Abraham Lincoln cufflinks up for sale, and he’s working his tail off to get them out the door. Unfortunately, he has yet to convince his buyer. There’s a moment of tension as Ed (DJ Qualls) interjects. However, the buyer takes in every word as Ed continues on, recounting a more convincing story about the cufflinks.

While Obergruppenführer Smith speaks, he makes a powerful statement on family as the room full of mourners hangs on every word he says. The camera zooms onto both his face, as well as Helen’s in turn, as both are barely able to repress their feelings.

With the funeral coming to an end, Thomas (Quinn Lord) hurries to meet Juliana. However, as the two begin to talk, the boy suddenly blacks out. It is only through Juliana’s quick thinking that she manages to hug Thomas, preventing him from hitting the ground and revealing his illness. Helen quickly hurries her son from the room, briefly sharing a meaningful glance with Juliana.

At the same time that Ed and Childan are delivering the money to the Yakuza, Frank and Sarah are on stake-out for the Resistance. As the two work, they bicker. Sarah still harbors resentment, feeling that everyone, including Frank, refuses to see her for what she is. Spurred on by her revelation, Frank opens up to her. For the first time, he reveals that he’s Jewish. “I don’t get to call the shots either,” he tells her.

However, nothing goes right as Frank and Sarah scope out the docks. As General Onada (Tzi Ma) arrives, Frank walks behind him. Suddenly, he stops as he sees workers emerging from one of the buildings. He finds himself stunned. Unfortunately, he’s attracts the attention of the Japanese, and Sarah is forced to approach him. She screams at him in Japanese, hoping to snap him out of it. But, Frank has already blown their cover.

Later, they return to the Resistance headquarters. As the argument with Gary threatens to escalate, Frank reveals what he saw. It turns out, the workers at the docks wore radiation badges. Everything is suddenly familiar to Frank, who reveals seeing San Francisco destroyed by an atomic bomb in The Man in the High Castle’s film. They don’t have much time. As the camera zooms into Frank, he continues, “We bring a plague into the Pharaohs”.

Meanwhile, the crowd of mourners converge after the service. Helen pulls her husband into a corner, finally telling him about Thomas’ episode at the church. There is growing worry on the faces of the parents as they talk about having to expedite their distressing plans.

Across the room, Lucy introduces Juliana to her husband. There’s a sudden blow-up as a rattled Alice enters. The woman is convinced the her husband was murdered. Gerald didn’t have a bad heart; in fact, he had the heart of a much younger man. Despite the drama, John is able to get her calmed down and out of sight. However, as Juliana tries to leave, Helen insists that she stay.

Later, Juliana and Helen share a glass of wine. As they talk, Helen feels Juliana out. However, Juliana plays the conversation flawlessly. When they clink their glasses, Helen seems to trust Julianna.

That night, as Helen and John prepare for bed, the phone rings. Picking up the phone, it’s Himmler. The Führer has collapsed. Hanging up the phone, Helen asks what’s wrong. John looks up slowly, “No man is immortal”.

Viewers can watch the first two season of The Man in the High Castle on Amazon Prime.