THE MAN IN THE HIGH CASTLE Recap: (S02E06) Kintsugi 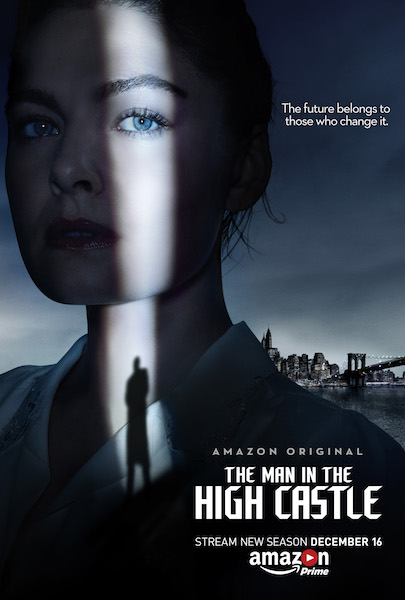 As this episode of The Man in the High Castle opens, Nobuske Tagomi (Cary-Hiroykui Tagawa) is trapped in a dream. We see Juliana (Alexa Davalos), his daughter (Yukari Komatsu), and his son (Eddie Shin) in rapid succession. Suddenly, the Star Spangled Banner plays in the background. Waking up, he rolls over in bed. Putting on his glasses, he once again looks at a picture. He sees Juliana. She smiles, her arm is wrapped around the smiling baby in her arms.

He steps outside, entering the living room, which is packed with his son’s friends. Tagomi watches as Juliana and his son gush over their baby. Julianna crosses in his direction, and thanks Tagomi for the use of the space for their “Ban the Bomb” meeting.

Meanwhile in the Reich, Juliana sits with George (Tate Donovan). She learns that surprisingly, the Man in the High Castle has gone AWOL. While conversation continues, George quickly shifts the topic, asking Juliana about her dinner with the Smith family. However, Juliana’s torn. There is a part of her which genuinely likes the Smith’s, “You can almost forget their Nazi’s…”. George stands up as he continues, “We need you to become one…”. Helen Smith (Chelah Horsdal) is the head of the Nazi social scene, everyone sucks up to her. Juliana needs to get close to these women. In fact, she needs to become one of them.

Later, as the Smith’s prepare for dinner, it turns out that even Nazi’s have trouble managing the schedules of three children. While Helen and John (Rufus Sewell) bicker about how they are going to get the kids to wrestling and ballet, Thomas (Quinn Lord) enters in a daze. He’s received a letter. Reading it, he’s been selected as one of ten members of the Hitler Youth picked to visit South America, in hopes of educating the less fortunate. As Helen and John look at each other, they can barely hide their fear. Helen breaks the silence, Thomas isn’t going.

Meanwhile, Joe (Luke Kleintank) wanders around his father’s house in Berlin. He’s alone. It turns out, Martin (Sebastian Roche) had to go to the office early, but has cleared his schedule to show his son Berlin. Looking around the room, Joe remembers that his father has a lengthy past which doesn’t include him. He looks at a photo on the wall. He never knew that Martin had another family, a beautiful wife and two children. However, Joe learns they died during a bombing raid.

Juliana arrives at the Smith house, looking to thank Mrs. Smith for her invitation to dinner. It turns out, the visit is a convienent one, as Helen is currently hosting bridge game. When Juliana expresses interest learn, Helen invites her in to join the game. It takes minutes for the conversation to descend to racial laws. Lucy Collins (Emily Holmes) one of the local women, nervously spills coffee on Juliana.

At the same time, Joe is once again at the end of his metaphorical rope. He is sick and tired of people lying to him. Joe calls over Nicole (Bella Heathcote), who he met at one of his Father’s party’s. He needs to talk to someone his own age. Joe jumps into her car, desperate for an escape from everything around him.

While Nicole and Luke walk through a picturesque park, they talk about his trouble. He feels like he’s lifting a huge weight off his shoulders when he admits that he’s a lebensborn. She leans in and kisses him. In fact, she’s a lebensborn as well. The chemistry grows between the two, their interaction becoming increasingly flirtatious while they talk.

Later, Helen enters S.S. Headquarters to talk with her husband. However, things are tense at the office, as the Pacific States have just located the most recent hideout of The Man in the High Castle. Despite the importance to her husband, Helen doesn’t care. There’s the little matter of Thomas’ upcoming trip to South America, and she refuses to let her son go. It turns out, John already has a plan. Thomas will never make the necessary rendezvous. Somewhere over the Andes mountains, Thomas will be kidnapped. In fact, it has already been arranged. Helen is understandably beside herself. “Will I ever see him again?” Her husband’s response is realistic, “Maybe…It’s the only way…”.

Meanwhile, Juliana goes dress shopping with Lucy. It turns out, Mr. Collins works in communications, and due to his proximity to Joseph Goebbels, Lucy doesn’t have to worry about any pesky clothing allowances. The two women hit it off, and suddenly Julianna has a brand new dress.

In Berlin, Nicole brings Joe to a party. Laid back, and surrounded by people his own age, Joe feels more at home. While they talk over a beer, the conversation eventually turns political. This is a hip crowd. They talk about environmentalism. Entering the house, there’s casual drug use around every corner. Seemingly grappling for acceptance, Joe joins in on the fun.

While Juliana and Lucy prepare to leave, Lucy suddenly stops. A terrified look crosses her face. The two women talk quietly in the bathroom. It turns out, Lucy and her husband have been trying to have a baby for three years. However, something has to be wrong, and Lucy is convinced it is a problem with her. As she steps out of the stall, Lucy looks to Juliana, “You won’t tell Helen, will you?” Juliana shakes her head, and the two women embrace.

Later, Juliana returns to see George. Sitting quietly, they talk about Juliana’s childhood with Judy. Juliana barely restrains the emotion in her voice as she reflects on the fond memories.

That night, Thomas and John talk about South America while they set the table. As Helen enters the dining room, she barely holds back her welling tears as she tells Thomas the good news. He’s going to South America.

Finally, as the the “Ban the Bomb” meeting watches a speech by John F. Kennedy, the haunting words play over the rest of the action. Joe stands in front of a mirror, wearing a suit his father picked out for him. Reaching into the pocket, he pulls out a swastica armband. As the screen fades to black, he’s torn on what to do.