THE MAN IN THE HIGH CASTLE Recap (S02E04): Escalation 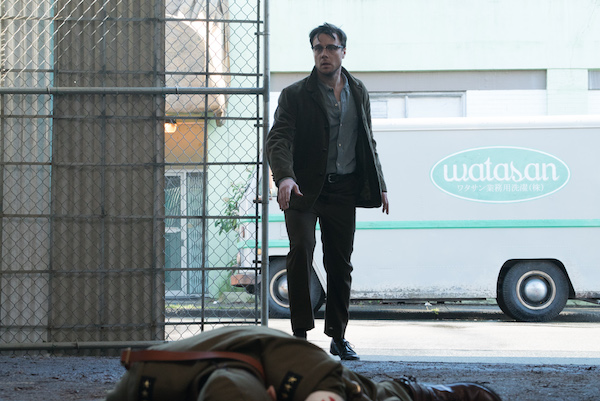 The Man in the High Castle opens as Nobusuke Tagomi (Cary- Hiroyuki Tagawa) sits in an office, staring at a picture of his daughter. Suddenly, reality shifts. As he seemingly comes out of a meditation, he’s far away from his San Francisco office. He’s in a nice, quaint apartment. Out the window, it’s green and picturesque. He hides as a car pulls up. A girl emerges and enters the house. As she turns to face him, suddenly he’s back in his office.

Meanwhile, the Resistance is tense. As Sarah (Cara Mitsuko) glances upstairs, Gary (Callum Keith Rennie) follows her gaze. Frank  (Rupert Evans) stands in front of the sink. He leans against the basin, his body exhausted. Gary tells him, “Taking a life to save innocent lives is nothing to feel bad about, Frank”. Frank’s response is slow, “I know that… I didn’t think  I could actually kill a man. I can’t say that feels good”. His body strengthens as he continues, “Someone once told me it takes a lot of effort not to be free. I kept my head down for so long, I’d forgotten what it feels like to stand up”.  He turns around, his body language suddenly firm and resolved. He’s like a new man. This is exactly what the Resistance wanted to hear.

At the Smith household, the family enjoys a sunny day of play. Helen (Chelah Horsdal) looks up as Alice Adler (Gillian Barber) enters the garden The woman is in shock. She tells Helen that her husband, Gerald Adler is gone. He died slumped over the wheel of his car. His heart gave out.

In Berlin, Joe (Luke Kleintank) returns to see his Father (Sebastian Roche). It isn’t a scene of Father and Son bonding; rather, Joe just wants to go home. And unfortunately, he needs Heusmann’s permission to leave Germany. While the two men talk, the truth emerges. As Martin reflects nostalgically on the Reich, Joe’s point of view is matter-of-fact. If he wanted his son to be a part of all this, why did he send the family away. Martin turns around, “I didn’t leave your mother. She left me”. Heusmann trembles with emotion as he recounts how his wife burnt his letters and turned the children against him. He continues, “I can’t take back the past, but the future is up to us. Please stay”. However, Joe’s response is icy. He extends the Nazi salute to his Father and leaves.

Meanwhile, in the Pacific States, General Onada (Tzi Ma) is hard at work on the atomic bomb. However, there’s some dissension in the ranks in the form of the Trade Minister.

Across town, Ed (DJ Qualls) and Childan (Brennan Brown) sit in the apartment. Ed reads through a newspaper, which reports the early retirement of a Nazi official. Ed’s wide eyed, reveling in the gossip behind the story. Frank hurries in, interrupting the moment. Childan attempts to boss Frank around, but for once he doesn’t listen. They’re going out to get materials. Frank looks up at Childan, “Have some food ready”.

Later, Frank and Ed manage to secure the supplies they need. Ed watches a self-assured and confident Frank make the deal, himself hesitant about what they have to do. However, the peace is shattered by gunfire. As Frank and Ed round the corner, a line of Japanese soldiers form a firing squad. The locals watch horrified as lines of innocent civilians are led in front of the guns.

Frank hurries to visit Gary and Sarah. While Frank is anxious to do something, the others play a strategic game. “You want them to kill more people?” Frank asks. “We’re just a handful of people, Frank. How do you think you bring down an Empire? With fear… they stop responding and start reacting. They strike back blindly…”. However, if Frank wants to help, they have something he can assist with.

Meanwhile, Juliana (Alexa Davalos) is living a quiet life in the Reich. It’s a beautiful morning as she finally takes Helen up on the offer for coffee. Unfortunately, Helen is busy comforting Mrs. Adler, so she asks Thomas (Quinn Lord) to sit with Juliana. In order to stay in the Reich, it is necessary for her to pass the ACT.

At the same time, Frank discovers what the Resistance needs help with. He pulls up in a car with Sarah, and they look across to a building. A few days earlier, workmen discovered a 2000 pound bomb in the basement, likely left over from the war. However, it’s not the bomb the Resistance wants. Rather, it’s the explosive material inside. Frank has one precondition, he needs someone with him who he can trust. While Sarah is unable to think of anyone, Frank immediately thinks of Ed.

Despite Ed’s objections, they manage to settle on a plan. While Sarah paces anxiously nearby, Frank and Ed work hurriedly on the bomb.

Later, back in the Reich, Juliana is on a quest to find George Dixon (Tate Donovan). While she is lucky enough to discover an address for the man, it turns out that he hasn’t lived there in several months. While she leaves the building, Juliana bumps into a man on the staircase. Looking her over with interest, he calls out “Juliana!” as she takes off quickly.

The man pursues Juliana to a train station. Finding herself unable to shake his tail, Juliana slides onto a bench next to a young man. While he seems pleasantly surprised that a pretty girl wants to sit with him, there’s one problem. He’s married. Juliana is doing everything she can to hide from her pursuer, but as she leans in to kiss the man, his wife emerges from the station. As such, it is the woman’s startled cry which brings attention to Juliana. Suddenly, everyone is drawing a weapon, and Juliana is barely able to escape with her life as there’s gunfire.

Meanwhile, Frank, Ed and Sarah are still hard at work over the bomb. While they drill, Sarah talks about her experience during the war. She might appear to be a Japanese person fighting against the Japanese, but her story is more complicated than that. In fact, Sarah’s family spent most of the war in an internment camp. As the gates opened at the end of the war, her family couldn’t find a home. While the Americans saw them as Japanese, to the Japanese they were traitors. They didn’t fit in anywhere.

Later, as they’ve finally finished work on the bomb, there is a growing rift. Frank is gradually loosing sight of their obligation to Childan. Rather, he chooses to stay and help with the bomb and watches while Ed leaves dejectedly. In truth, Frank is a changed man. As he and Sarah sit, talking more about her experiences, the attraction between them grows. As they undress, Juliana is the furthest thing from Frank’s mind.

Back inside the Reich, as a startled Juliana returns to her apartment, the phone rings. Picking it up, the voice on the other end belongs to a man. “I hear you’ve been looking for me. This is George Dixon”.

Amazon Prime subscribers can watch the first two seasons of The Man in the High Castle.