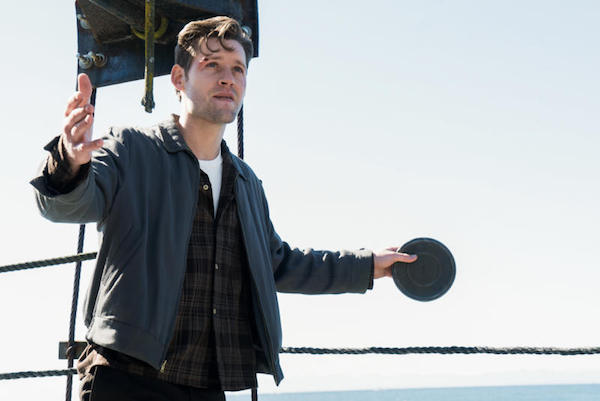 Inside, the boy enters a classroom. Another student stops him, frantically preparing for a test. This is high school as we remember it. Once the bell rings, the students recite the pledge. The tension in the moment escalates as the class turns to the the front of the room. They raise their hands in a Nazi salute. Furthermore, the camera pulls back, revealing a picture of an elderly Adolf Hitler at the front of the classroom. Finally, the students chant in perfect unison, “Sieg Heil.”

Later, Joe Blake (Luke Kleintank) sits on a fishing vessel in the Pacific Ocean. He stares at a reel of film in his hand. After a moment, he enters the bridge of the ship, exchanging a quick conversation with a member of the crew. The radio is broken, and this evidently has Joe on edge. As he stares at the sky above his head, the scene cuts.

Juliana Crain (Alexa Davalos) sits in a darkened tunnel, her knees hugged tightly to her chest. She shifts her glance as a door opens. “Why did you do it, Juliana?” Karen (Camille Sullivan) enters, standing above her. Karen stares at her, clearly anxious for an answer. Julianna responds, “I couldn’t take his life, Karen. I couldn’t let you do it, either”. Suddenly, a group of men enter, facing the two women down hotly. They too want to know why Joe is still alive. He is a Nazi, after all.

As one of the men draws a gun, he says, “We needed that film”. In fact, Juliana has seen the film. She volunteers to describe it to the infamous “Man in the High Castle,” frame by frame if she must. As she stares down the barrel of the gun, she continues, “Ask him if he wants to see me”. His response is brief. “…Already did”. He fires.

Juliana’s life flashes before her eyes. We see her father dying in World War II, the impending invasion, and later the stages of her relationship with Frank. As Juliana stands in front of an oncoming bus, her arms outstretched, the action cuts.

Meanwhile, Frank Frink (Rupert Evans) stands in a Japanese prison opposite a government official. He gives a full confession detailing his murder of the Crown Prince. Much to Frank’s dismay, no one believes him. While the desperation grows in his voice, Frank grabs the man by the lapels. “I’m the one who’s supposed to die”.

Later, Helen Smith (Chelah Horsdal) bakes in the kitchen with her daughter. They are the very picture of domestic bliss. Another daughter enters the kitchen, informing her mother that there’s a car outside. The woman snaps to attention and grabs a gun. She watches as two men in full Nazi uniform get out of a government car. She swings the door open as she recognizes her husband, Obergruppenführer John Smith (Rufus Sewell). They embrace. He hurries her inside nervously, shutting the door quickly behind them. Clearly, the family is on edge. It seems even those at the center of the Nazi party don’t know who to trust.

Meanwhile, Joe reenters the bridge, hearing the radio finally working. The crew draw their weapons. “You’re a goddamn Nazi”. It turns out, they also want the film. Attempting to wield the only power he has, Joe dangles it over the water. He admits that his aim is to sell the film to the Nazis, while also trying to convince the sailors that the Resistance won’t give them what they deserve. In fact, even the Yakuza are offering more money for the film.

Frank is back in his studio, however, he’s not truly at home anymore. Overwhelmed with frustration, Frank wrecks the house before dropping into an alcoholic bender.

Later, the Japanese Trade Minister (Cary-Hiroyuki Tagawa) meets with his team. The Fürher is ill, and there’s a growing movement to end Japan’s uneasy alliance with Germany. Furthermore, the Japanese now have the scientific data necessary to build a Heisenberg device with range enough to hit New York City. The room erupts with applause. It seems war is inevitable, but the Trade Minister isn’t so sure.

With the sailors seemingly placated and in possession of their money, Joe is finally able to make his exit. He rows away slowly, eventually climbing onto a waiting Nazi submarine. Suddenly, the ship he was on blows up. It was all a Nazi trap.

Finally reaching New York, Joe meets with Obergruppenführer Smith. However, the happy reunion quickly changes in tone. The usually calm Joe is emotional. “You were supposed to pay those men”. Meanwhile, Obergruppenfühurer Smith is a Nazi. He reclines comfortably on his chair, fully at ease with everything going on around him. He barely raises an eyebrow as Joe asks to resign, saying, “This isn’t the man I want to be”. Obergruppenfühurer Smith stands up cooly, “It seems I misjudged you”.

Meanwhile, back at the Frink residence, Arnold (Daniel Roebuck) rushes in and finds Frank post-bender. The men blow up. Frank still harbors feelings about Arnold’s employment with the Japanese government. Despite the tension between them, Arnold tells Frank that Ed (DJ Qualls) has started to arouse suspicion. As such, Frank is desperate to help his friend. They need to find a well connected pawn.

Frank leaves for Robert Childan’s (Brennan Brown) “Vintage Americana” store. He tells Childan that Ed’s been arrested for the assassination of the Japanese Crown Prince. However, the  antique dealer is not anxious to help. In fact, Childan tells Frank that he would be a dead man if he assisted. But, Frank points out, “You will be a dead man, unless we find a way to get my friend out of this”.

Later, Juliana wakes with a start. A mysterious man (Stephen Root) sits across from her. This is Abendsen. While she collects herself, he pours her a drink. As she tries to figure out where she is, he suddenly snaps. “You’re supposed to answer my questions, chicky. Not the other way around”. Juliana follows him into another room. Rows of film canisters line the walls. Is this man the mythical “Man in the High Castle”?

“You’re him aren’t you?” Juliana walks around, looking at the reels of film. She picks one up. Surprisingly, the canister contains 4th of July Celebrations from Phoenix Arizona in 1961. Juliana looks up at him, “This can’t be possible”. He smiles, “But it is, you’re holding it”. Juliana goes on to recount what she saw on the film. While she speaks, Hitler also watches the film in Berlin. San Francisco has been attacked by an atomic bomb. As the elderly Führer watches the film, he explodes in anger. As she recalls Frank being shot in the footage, Abendsen asks, “Did you recognize anyone?” She reluctantly tells him about Frank.

As they talk, he describes these films as being part of an alternate reality. Sometimes people are the same across the realities, but just as often they are different. He watches these films, communicating what he sees to the Resistance. Suddenly it makes sense to Juliana why the Nazis want the films. However, he quickly corrects her. In fact, it is Hitler who wants the films. The aging Führer is too paranoid to let anyone else see them. He shows her a frame of a man laying dead in the street. According to his observations, in all the films where Japan wins the war, San Francisco is eventually attacked. However, in the film he shows Juliana this doesn’t happen. Everything seems to tie back to this Nazi soldier, but Juliana doesn’t recognize him.

Juliana is having trouble understanding everything. Suddenly, the prospect of her sister being alive enters her mind. However, he stops her tangent, storming away angrily. She asks, “Am I in these films?”. He swings open the door, a man enters and shoots Juliana.

Meanwhile, Frank and Childan go to visit Mr. Kasoura (Louis Ozawa Changchien), a criminal defense lawyer. Frank stands by quietly as Childan attempts to sway the situation. However, Frank eventually takes over as things don’t turn out as they had hoped.

As Juliana slowly regains consciousness, she finds herself in the back of a moving car. Just as the members of the Resistance are alerted to her waking up, she manages to pop the trunk and jump out. In a lucky twist, they are cornered by a Japanese soldier, giving Juliana just enough cover to get away. There’s a gun battle, and Karen is killed.

As the car speeds off, Juliana hides in the forrest.

The Man in the High Castle seems to be picking up right where it left off. Not only is the fantastical period drama one of the best designed shows on television, it combines intelligent writing with the well-crafted performances of its’ talented cast. Readers with an Amazon Prime account can check out the first two seasons of the series in full.