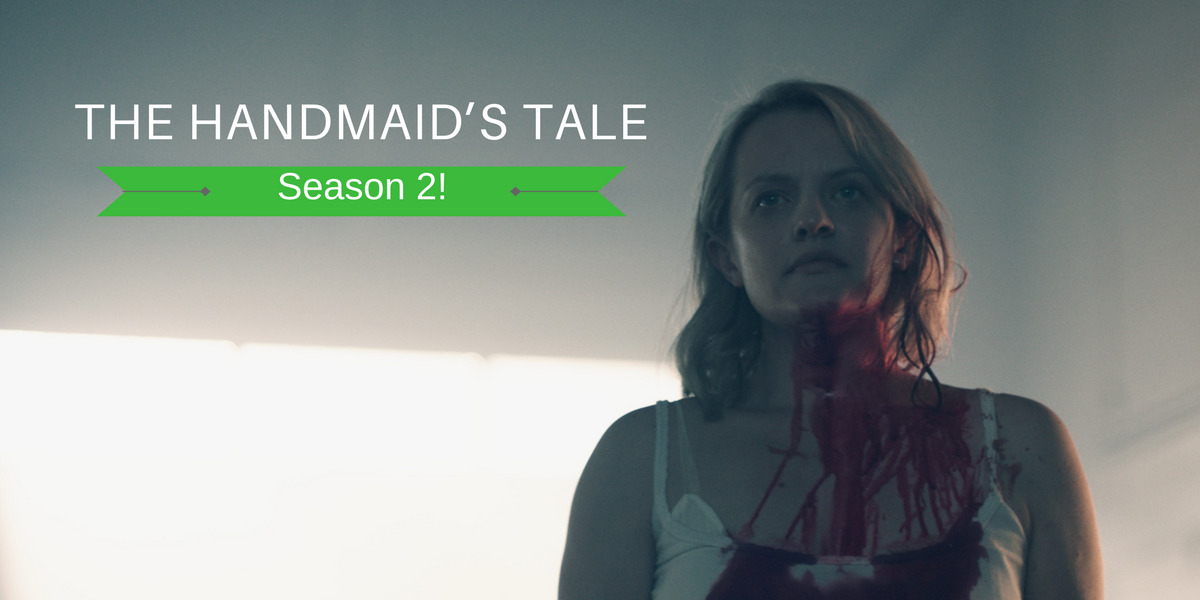 We’re back! Quick rundown of the accolades The Handmaid’s Tale accumulated since we were last here…

Winner – Cinematography for a single-camera series (one hour)

Please let us not forget – the woman who started all of this – Margaret Atwood.

If you haven’t watched the premiere of Season 2 yet, please do that and then come back here, because otherwise, I’m afraid I’m going to ruin it for you!

RELATED: Read the Season 1 recaps of The Handmaid’s Tale

We join June back in the van that picked her up from the Waterford’s to haul her away. So is this a good thing or a bad thing? We still don’t know.

The van stops, June has some sort of leather Hannibal Lecter mouth guard put on her, then she’s pulled out of the van into – Fenway Park. As in the oldest baseball park in major league baseball. Where the Boston Red Sox play. Or, in this case, where they used to play. Looks like America’s favorite pastime has changed significantly. 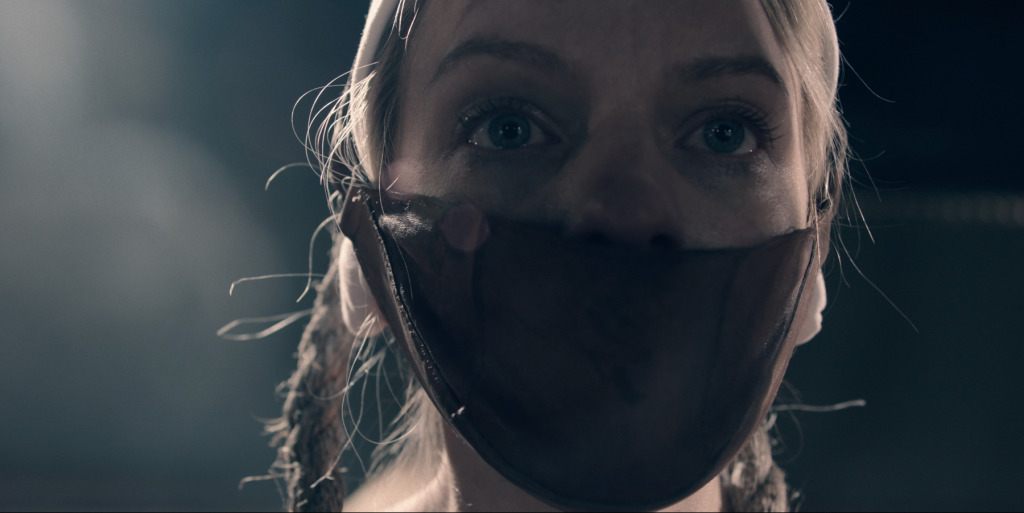 Grab a box of tissues. We’re not even 5 minutes into it and I’m bawling. This is bad. Right? She’s in trouble. She’s going to die. 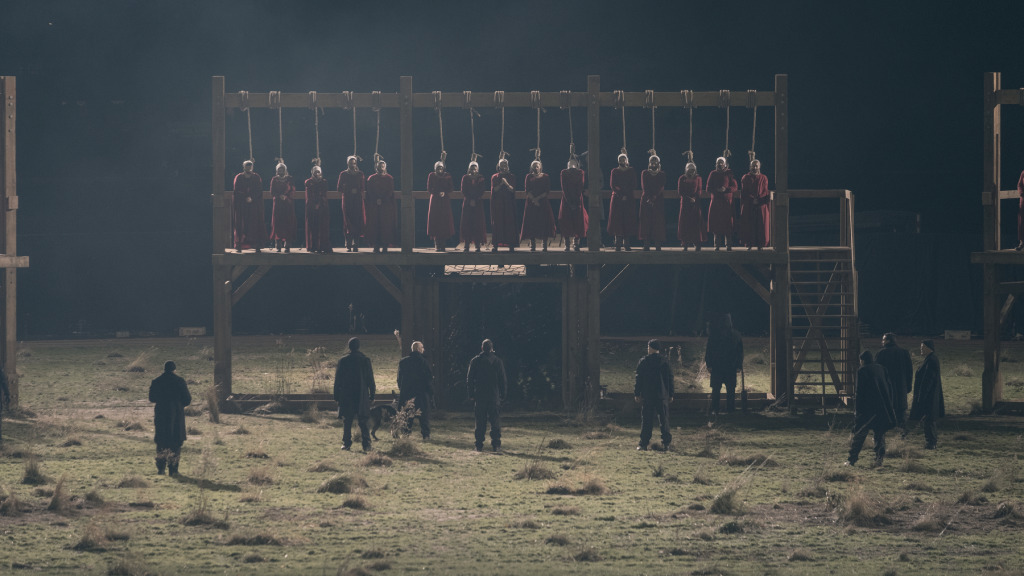 They’re all there, waiting to die. A Guardian gives a signal for the platform under their feet to be dropped. And it does. But only about 1/2″. It was all a scare tactic! They’re not dead! They didn’t hang them!

Guess who strolls in?

We get our first flashback of the season here – June and Luke (O.T. Fagbenie) are getting an under-the-weather Hannah (Jordana Blake) ready for school. They quickly discuss and decide that they’re going to stop using birth control to see what happens. So this is clearly BEFORE everything went to h*ll in a hand basket.

Back in the present, Aunt Lydia is making her “girls” stand in the pouring rain while holding up the stones they refused to use to kill Janine (remember poor, sweet, dumb one-eyed Janine?).

Aunt Lydia is told that June , err Offred is pregnant. So she lets her go inside out of the rain and presents her a tray of food. Only June’s not willing to play along anymore.

She’s not going to eat, not going to keep being Lydia’s good little girl. Lydia, not surprisingly, isn’t going to put up with this. She takes Offred on a little walk to the basement of her Handmaid School For Formerly Free Women. There, we meet a new character. A pregnant Handmaid chained to a beam. 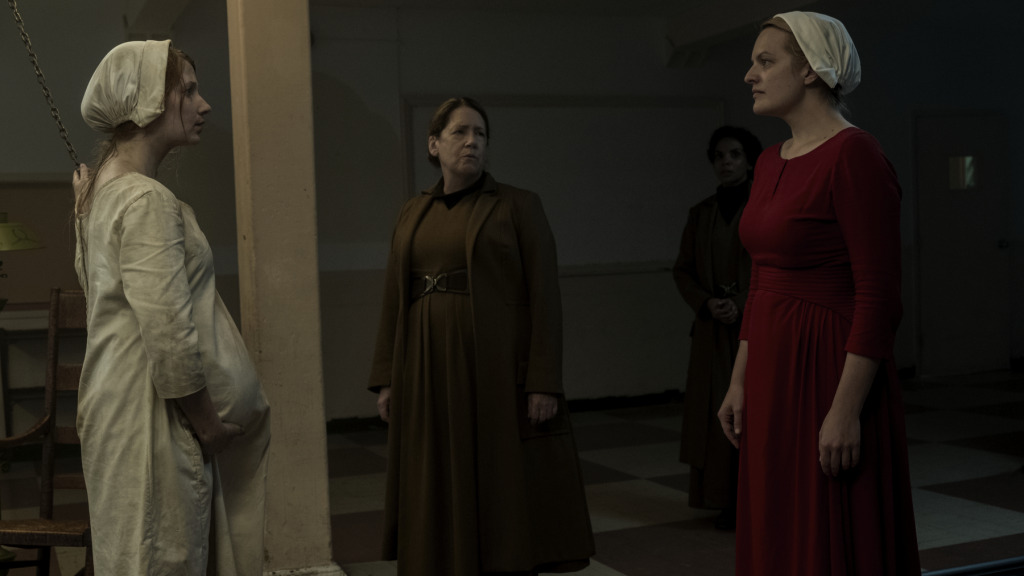 She didn’t play by Aunt Lydia’s rules and this is the result. Back upstairs, June promptly begins to eat her food. I mean, I get it. No judgment.

Lydia has the other Handmaid’s march in and watch as she burns original Alma’s hand over an eye on the stovetop. Who else would like 5 minutes alone in a dark alley with Aunt Lydia and that electric cattle prod she’s so fond of? Is it just me?

We return to our flashback, June is at work and a coworker brings her phone that’s been buzzing non-stop. She checks her voicemail and finds out Hannah’s school sent Hannah to the hospital because she had a fever. June rushes there and finds her. A nurse/doctor is keeping her company.

This person has the unmitigated gall, the nerve, the cojones to give June the third degree about why Hannah is sick, why she was at school, why June was at work, why she works at all. Good thing they’re in a hospital because this lady is about to need stitches, at the least.

Back in the present, June is getting an ultrasound to check on her pregnancy. What’s better than being sprawled out in stirrups with no freedom or rights? Having your rapist’s accomplice stroll in to chat you up, that’s what. I’m talking Serena Joy (Yvonne Strahovski), of course. This is the point at which you and I ask Siri (or Alexa, if you’ve got it like that): define “recalcitrance.” Gold star if you use it this week in a sentence!

Fred the rapist (Joseph Fiennes) strolls in soon enough, smug and trite, as per usual. 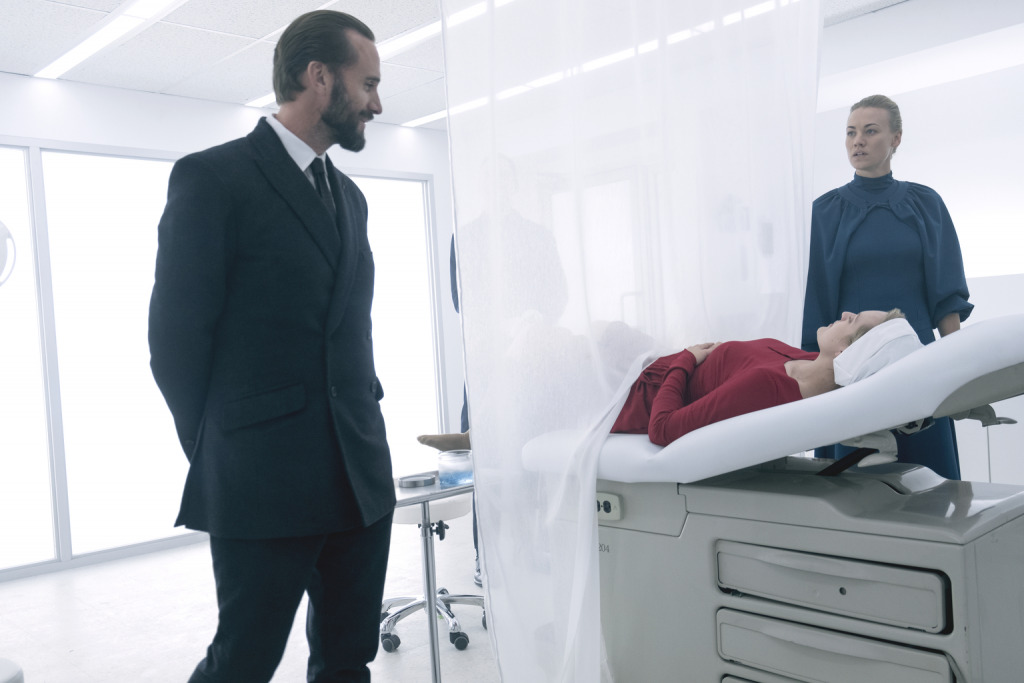 Once the doctor confirms Offred is pregnant, Serena Joy changes her tune right quick. Oh thank you, Offred, oh you’re the best, Offred, oh you get a break from the raping for a while Offred, etc. etc.

Everyone’s so happy, except June but who cares how she feels, right? They clear out, except for an orderly. As he’s leaving, June says “Under his eye,” and this guy responds by turning to her and saying, “God speed, June.” OHHHHHHHH this is getting gooood. He knows her real name!

As she’s putting on her boots, she finds a key in one of them, with a red dot on it. She uses the key to open a door in her exam room, which leads her out into the stairwell! 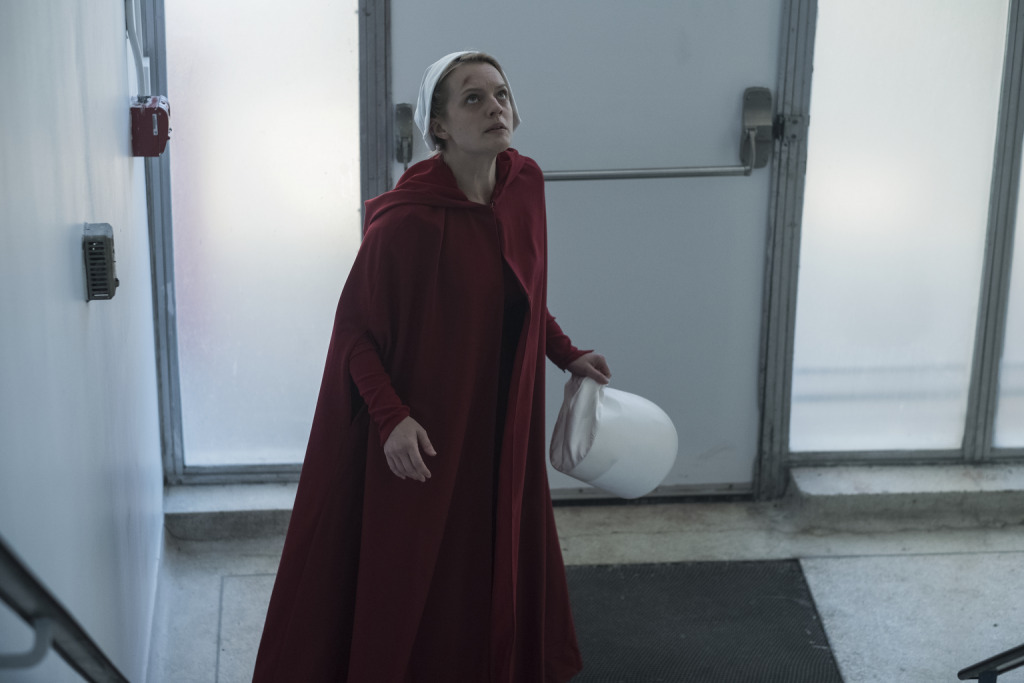 Back at the Waterford house, they’re straight up panicking. Fred is calling in favors left and right to try to locate Offred. Serena June meanders around that loveless house, dazed and depressed. Maybe if you hadn’t been so horrible, you wouldn’t be in this predicament. Girl, bye. 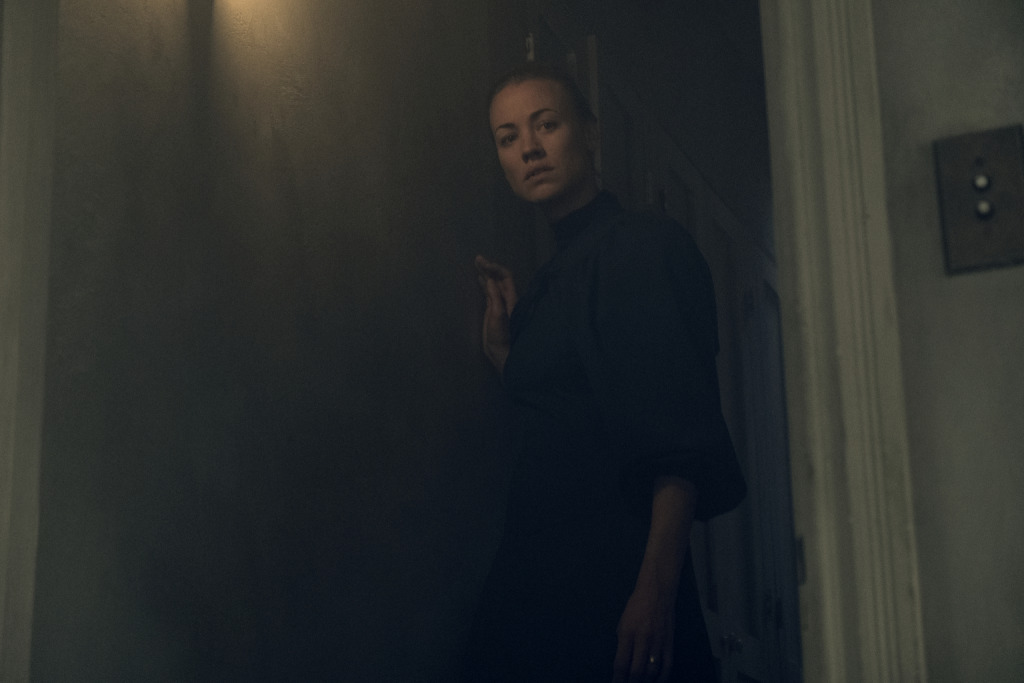 June finds herself red dotted into the back of a refrigerated truck hauling slaughtered meat (nice analogy, writers). The truck is driving. But where?!?!

Back in our flashback, June and Hannah arrive home from the hospital, St. Holier Than Thou, to find Luke watching breaking news on TV. There’s been an explosion at the White House. For those of us who were n the U.S. and watching TV when 9/11 happened, this is going to feel a little too close to home. Brace yourselves.

Back in the present, the truck stops and the drivers lets June out. He leads her into a big warehouse and tells her to stay inside before he takes off. And who is in there?

He tells her this is temporary until they know it’s safe to move her. Meanwhile, she takes off her Handmaid outfit, and places it in an incinerator. She lets down her hair, but notices the “Handmaid tag” on her ear. She grabs some scissors and STARTS CUTTING IT OFF OF HER EAR. If you’ve ever had the upper cartilage of your ear pierced (like I tried to when I was 17), you know how sensitive that part of your ear is. She just cuts and cuts and bleeds and bleeds. But she manages to finally get that thing off, once and for all!

When she’s done, she says, in voice over,

Here’s what we can expect in Episode 2: Offred adjusts to a new way of life. The arrival of an unexpected person disrupts the Colonies. A family is torn apart by the rise of Gilead.

What’d you think of this first episode of season 2? Feel free to comment here or contact me on twitter. I can’t wait to watch the rest of the season with you!

Her twitter:
Kim Bowman
In addition to recaps, Kim writes witty ensemble TV comedies with strong female leads, none of which have been produced *insert sad trombone sound here.*

Her twitter:
Latest posts by Kim Bowman (see all) 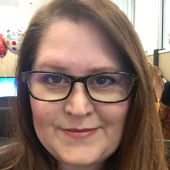 In addition to recaps, Kim writes witty ensemble TV comedies with strong female leads, none of which have been produced *insert sad trombone sound here.*Nevertheless, she persists.