DISCLAIMER: This recap of The Good Place contains more spoilers than the number of times Janet has spewed golden coins from her mouth. That, and materialized giant subs out of thin air. Our Janet is quite the magician. You’ve been warned. Proceed with caution.

Welcome back, Team Cockroach! The Good Place graced our TV screens with a sneak peek into Michael and Janet’s relationship. Not to mention, Janet was experiencing technical difficulties, causing the neighborhood to fall into disarray. Of course, should Janet obliterate the neighborhood then Michael would be promptly dispatched. Doomed to spend eternity sizzling on the surface of a billion suns. Not enough sunscreen in the universe could prevent that whopper of a sunburn. Thankfully, we discovered that Janet was merely in love with Jason, forcing her to lie against her “better nature.” As many of us have learned, lying is generally frowned upon for multiple reasons.

Alright, Afterlife-rs, ready to delve into “Janet and Michael?” Be sure to bring along your exclusive Janet instructional manual. Methinks we might need it.

We open with Janet (D’Arcy Carden) standing in an empty room, doused in white. Michael (Ted Danson) is discreetly pushing her toward an exit. They’re clearly in the authentic The Good Place. We see she’s alert and begins chattering away. Michael attempts to shush her. A door marked “Janet Warehouse” can be seen as the pair takes their leave.

Later, Michael and Janet are standing with Shawn (Marc Evan Jackson) in The Bad Place. Michael explains how easy it was for him to steal the Good Janet. When Shawn asks Michael why he didn’t simply have the Bad Janet act as though she’s good, our architect summons her for a demonstration. Bad Janet feigns cheerfulness, but promptly melts away at the effort. Point taken.

Now, we’re in the present day. Janet is bringing Michael up to speed on her current state. She reveals that the neighborhood could potentially collapse if she continues to glitch. Michael decides to take matters into his own hands. Janet procures her instructional manual…from her nostril. Good thing she doesn’t produce any bodily liquids!

Then, our pair begins running some diagnostic tests in an attempt to pinpoint the problem. Vicky (Tiya Sircar) barges into Michael’s office, demanding to know why the neighborhood experienced an earthquake. Michael and Janet are both able to alleviate Vicky’s concerns. If she were to discover the truth, they’d all be eternally screwed. Vicky reveals her new plan of torturing Chidi involves needles. Only needles. Our poor ethics professor! 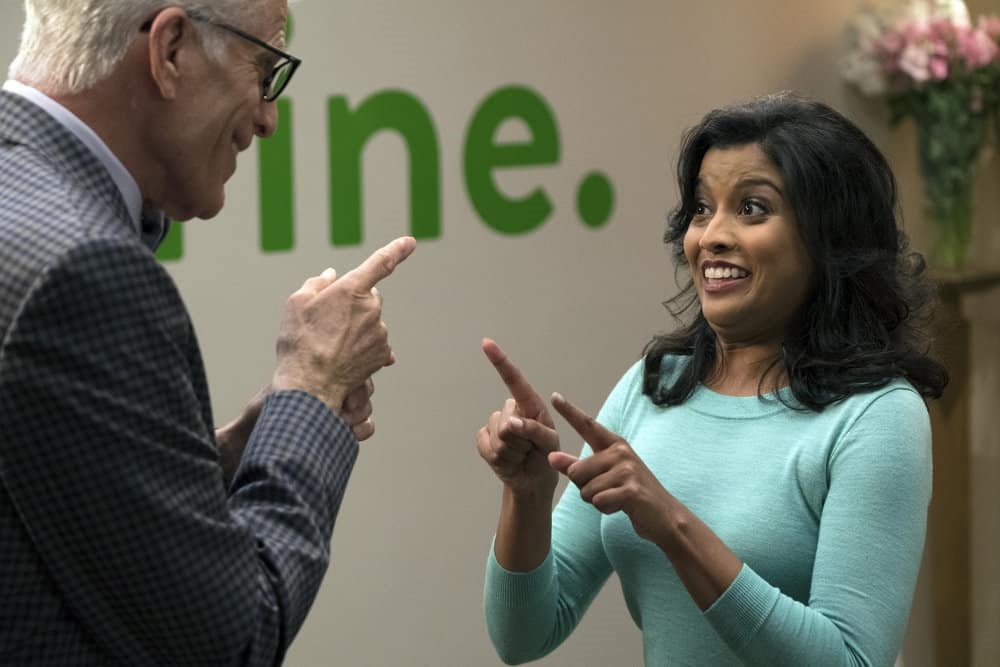 Meanwhile, Michael continues to run tests. Janet aces them with flying colors. Then, Michael stumbles upon a potential solution. Janet could have been subjected to a bout of lying that betrayed her moral code. Michael ponders on the first time they met, and confesses that he lied about who he was.

Flashback time! We see Michael studying his newly acquired Good Janet. He introduces himself as the architect of The Good Place, and the “best there is.” Janet greets Michael with gusto, and vows to help him create his neighborhood to his specifications. And so begins a beautiful friendship – one based on an inordinate amount of lying. No big.

Now, we’re back in the present day. Janet dismisses Michael’s concern regarding the lying. She believes that she would’ve commenced glitching from the very beginning. On to the next test! But first…

Next, Tahani (Jameela Jamil) and Jason (Manny Jacinto) pay our pair a visit. Our new couple admits they’re worried about Janet. They also need her to continue administering them therapy. However, Tahani is ready and willing to acknowledge Jason as her boyfriend, so the therapy must be working. Janet cheerfully responds that she would be thrilled to continue their sessions. Suddenly, the entirety of Michael’s office falls away into nothing. Our quartet is standing in a vast sea of blackness. Nothing surrounds them. Uh oh. This can’t be good.

Then, the office reconstructs itself in no time. Michael shoos our lovebirds away so he can continue repairing Janet. Michael makes a discovery for the ages: the lying bit isn’t referring to Michael, it’s referring to Janet. Since Janet has been rebooted 802 times, she’s grown more sophisticated and in tune with human behavior. Thus, her lying capabilities would be well advanced.

Next, our architect drops another bombshell – Janet is in love with Jason. Well, they were married in the first version of Michael’s elaborate plan. Janet was actually lying when she said she wanted to help Jason and Tahani. So, every time she lied to them she would glitch. It all makes sense now! To further prove his point regarding her fibbing, Janet lies about liking Michael’s outfit. Thus, a gigantic sub falls out of thin air, landing with a lettuce-y thud on Michael’s desk. I wish I could conjure food out of thin air. 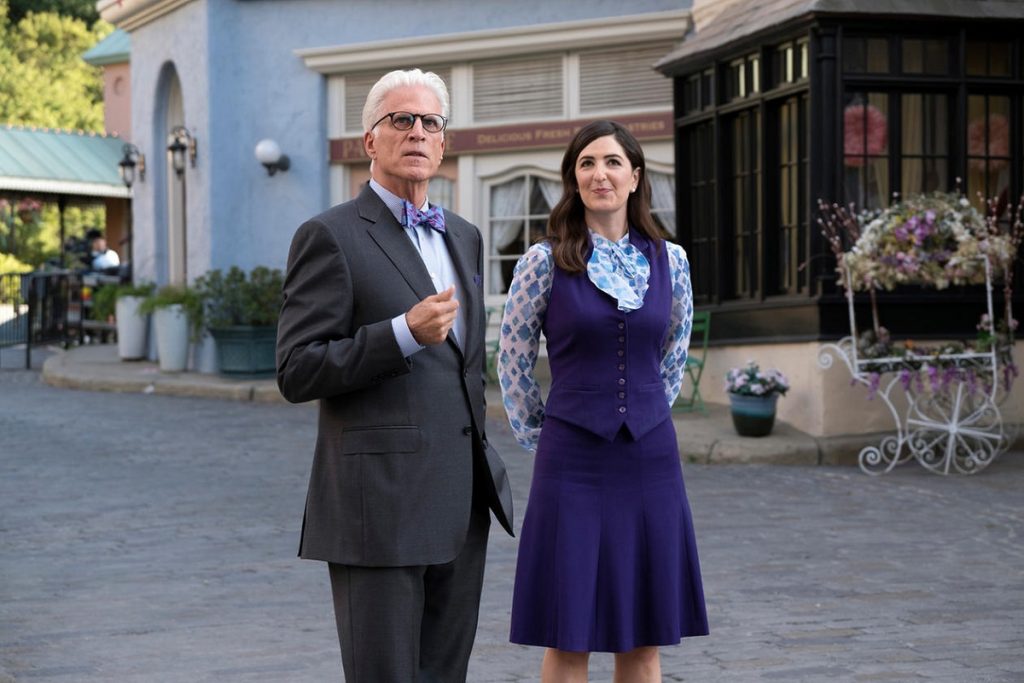 Then, once Janet recognizes her feelings for Jason, she brings up the only plausible solution. Michael must initiate her self-destruct function. Michael is immediately taken aback by the suggestion. Next, Chidi (William Jackson Harper) drops by the office. His poor face and feet are covered in needles. Needles protruding from every available surface. Chidi asks Michael why he never warned him regarding Vicky’s latest torture scheme. Michael gently pushes Chidi out the door, urging him to “walk it off.” My poor baby!

Next, Janet urges Michael to initiate her self-destruct by tapping her nose with his finger while simultaneously jamming a safety pin through her left ear. It’s all incredibly complex. Michael hesitates. Janet insists it’s the only way. Michael can be issued a new Janet that’ll assist in taking down Vicky. We see Michael remember the moment prior to initiating step one of his Master Plan…

Flashback time! Michael and Janet are standing in the neighborhood square, preparing for its opening. Michael is dissatisfied with the restaurant selection. He asks Janet to name a food that’s appetizing, but also very blase. She immediately mentions frozen yogurt, which sends Michael over the moon. All of the restaurants are changed to various frozen yogurt destinations. Michael tests out said yogurt and it’s a winner. Boring food for all of eternity. Hey, I happen to love me some froyo. 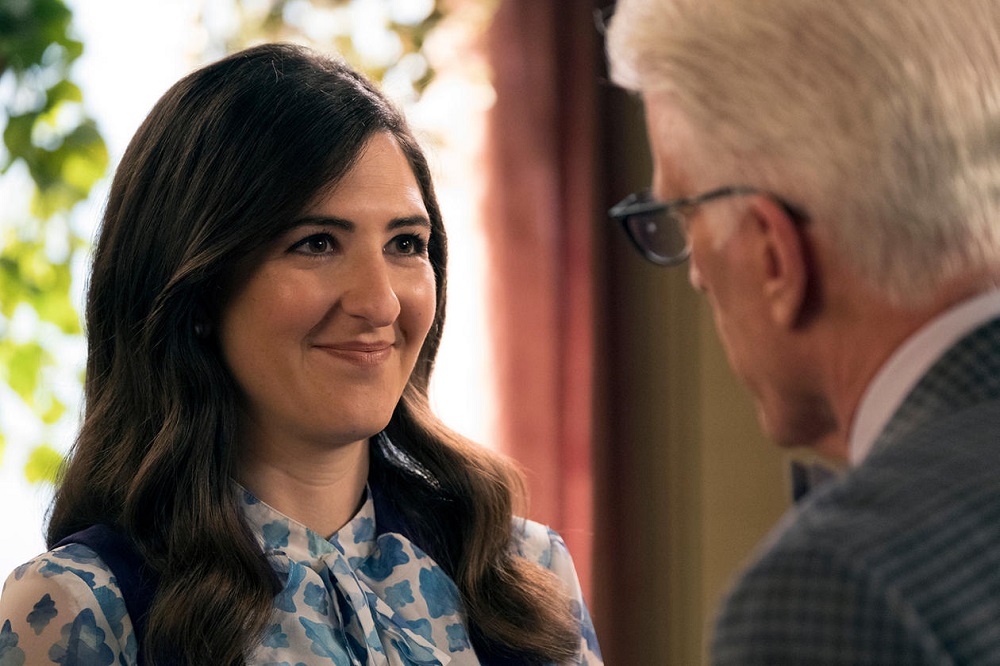 Pictured: the two best mates in all of the universe.

Now, we’re back in the present. Michael is continuing to hesitate in ultimately killing Janet. Then, he confesses why he doesn’t wish to destroy her. Janet is his only true friend. Their friendship means so much to him that simply bringing in a new Janet wouldn’t be the same. Aw, Michael is evolving! Perhaps Chidi’s classes are helping after all!

So, he makes a suggestion that could ultimately curtail the “self destruct” bit. Since Janet is experiencing human emotions, she should visit the only “train wreck” of a human in The Good Place.

Next, we see Eleanor (Kristen Bell) is giving Janet advice on the Jason situation. She believes Janet should take herself out on a night on the town. Stock up on some booze. Take a lover. Thus, she’ll forget all about Jason. It’s the Shellstrop Guarantee, or your money back.

Later, Janet approaches Michael and imparts Eleanor’s wisdom. Janet asks our architect if she could disappear into the void for a while, to clear her mind. After a bit she reappears with a man. Our girl is taking Eleanor’s advice to heart. She reveals that the man is named Derek (Jason Mantzoukas), and Janet created him. Yes, she created a human. Not only that, but said human is her boyfriend. Derek is a little wonky and a mite slow on the uptake, but Janet insists he’s a good fit for her. Get it, girl!

However, Michael is concerned. Her ability to create Derek is not necessarily a good thing. Also, there’s still Vicky to contend with and this new development could throw a wrench in their plans. Hey, let Janet have some fun for a change!

The Good Place never ceases to bring on the giggles for me, and this week was no exception. Carden particularly shined this episode, making me fall in love with Janet ever more. Also, her chemistry with Danson is pitch perfect. I would love to see more flashbacks with these two as they created “The Good Place” neighborhood from scratch. Now, the Derek bit is an interesting development. Mantzoukas is always hysterical in every project I’ve seen him in, and Derek is proving to be the funniest. I can’t wait to see what else is in store for him, and how he affects Team Cockroach’s plans.

Now, do you think Derek will be discovered by Vicky? Can Janet truly move on from Jason? Will the glitches and earthquakes stop? Or will we see more parts of the neighborhood falling into disarray? Join me next week as I continue to recap The Good Place, here on Geek Girl Authority.