DISCLAIMER: This recap of The Good Place contains more spoilers than the number of times Jason rode around in a kangaroo pouch at Vicky’s party. Jason loves kangaroos more than his dope dance crew. You’ve been warned. Say your prayers, and proceed with caution.

Welcome back, denizens of the afterlife! The Good Place blessed us with its triumphant return tonight. “Existential crisis” was just that – Michael embargoing on an existential crisis of eternal proportions. Then, we saw him abruptly transition from existential to midlife crisis. More specifically, an ’80s middle aged father with his snazzy new corvette and diamond stud earring. Oh, and don’t forget the perfect hair coif and over sized white jacket. For someone who’s only existed in the afterlife, Michael had a confident grasp of what the ’80s encapsulated.

Alright, ready to delve into Episode 5 of The Good Place? Be sure to arrive at Chidi’s ethics class on time. He despises tardiness more than afterlife itself.

We open with Vicky (Tiya Sircar) swiveling around in Michael’s chair, an official move of power. Don’t underestimate a good power chair swivel. Michael (Ted Danson) sits before her, utterly dethroned and submissive to Vicky’s diabolical plan. He hands her pages containing his torture ideas for Eleanor and co. However, Vicky casts them aside and divulges her next big scheme. She’s going to throw a birthday party for Gunnar, a resident of The Bad Place. Tahani will also throw a birthday shindig for Gunnar, but nobody will attend. They’ll all purposefully flock to Vicky’s soiree. Evil plan is evil!

Later, Michael reveals Vicky’s plan to the group. Tahani (Jameela Jamil) and Jason (Manny Jacinto) are instructed by our architect to scurry off and prepare for the party as planned. Pretend, once again, that nothing is amiss. Easy peasy. Meanwhile, it’s high time for some moral quandaries! Eleanor (Kristen Bell) and Michael must attend Chidi’s (William Jackson Harper) ethics class. Michael has already discredited said class, which means they’re off to a great start. Humans are just blobs with their breathing tubes next to their feeding tubes, right Michael?

Then, we’re with Tahani and Jason as the duo prep for the big birthday bash. Tahani vows to throw the swankiest party known to humankind, despite the fact that no one will be in attendance. Janet (D’Arcy Carden) is summoned, with Tahani’s request to emulate one of the charity events the latter threw in 2007. Tahani knows how to get down and dirty. Vicky won’t know what hit her.

Meanwhile, Chidi pulls Eleanor aside after the latter makes a revelation. Michael can’t comprehend ethics because of his immortality. If they can get the architect to understand mortality from a human perspective, he might have a better grasp on our moral code. Fool proof plan, right? I don’t know about you, but Chidi definitely won me over with this. Intelligence is a favorable quality in a person. 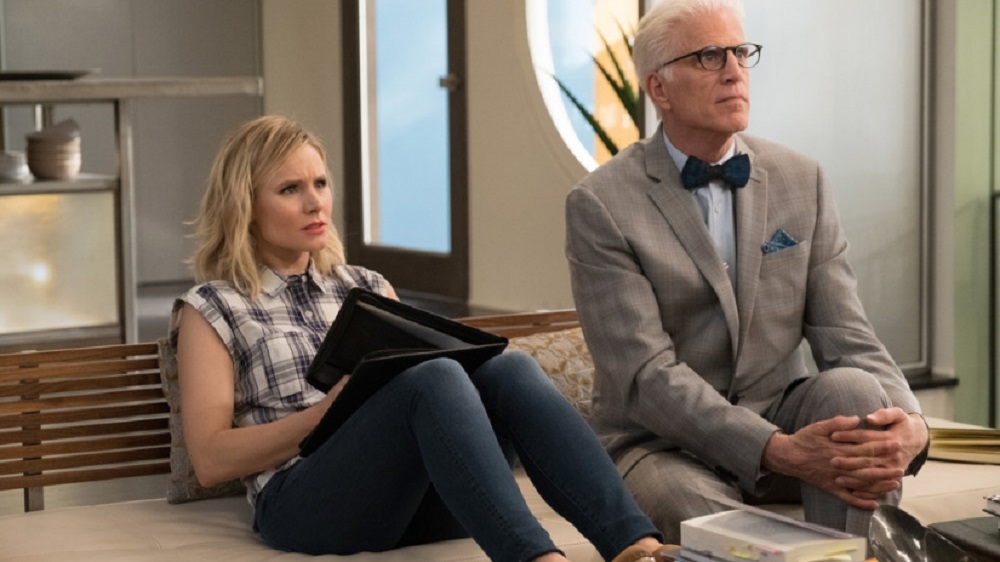 So, the pair approaches Michael with this in mind. Michael explains the process of “retirement,” where he would essentially be wiped from existence. Every molecule of his being would be scattered on the surfaces of a billion suns. Forever in pain. Now, Chidi allows Michael to process this. Death, even in the afterlife, is still a possibility for Michael. This revelation causes our architect to malfunction. Existential crisis mode has officially kicked in. Welcome to humanity, buddy!

Then, Eleanor regales Michael with a story. Eleanor recounts how she first encountered the concept of death. A young Eleanor is informed by her mother Donna (Leslie Grossman) that her dog passed away. Grossman is hysterical as a mother who’s trying to sugarcoat a beloved pet’s passing. Eleanor initially doesn’t grasp it, but she gradually begins to understand. Also, I can see why Eleanor is forked up. Exhibit A: Donna Shellstrop.

Party time! Eleanor and Chidi escort a still shell shocked Michael to Tahani’s glittering shindig. Every decoration is perfectly perched. Every color palette perfectly synchronized. However, knowing that no one will attend due to Vicky’s evil plan, our quintet decides to visit the opposing party.

Now, Vicky spared no expense with her bash. Gunnar apparently worked with animals in his mortal life (of course that’s his cover up), thus his party was chock full of them. A “Build a Real Bear Workshop” was one of the main events. Although, I’m still not sure how you can build a real bear, but this is the afterlife so magic, right? In short, it knocked the socks off Tahani’s party. Eleanor and Chidi briefly turn their backs on the catatonic Michael, only to discover their newfound cohort has vanished. 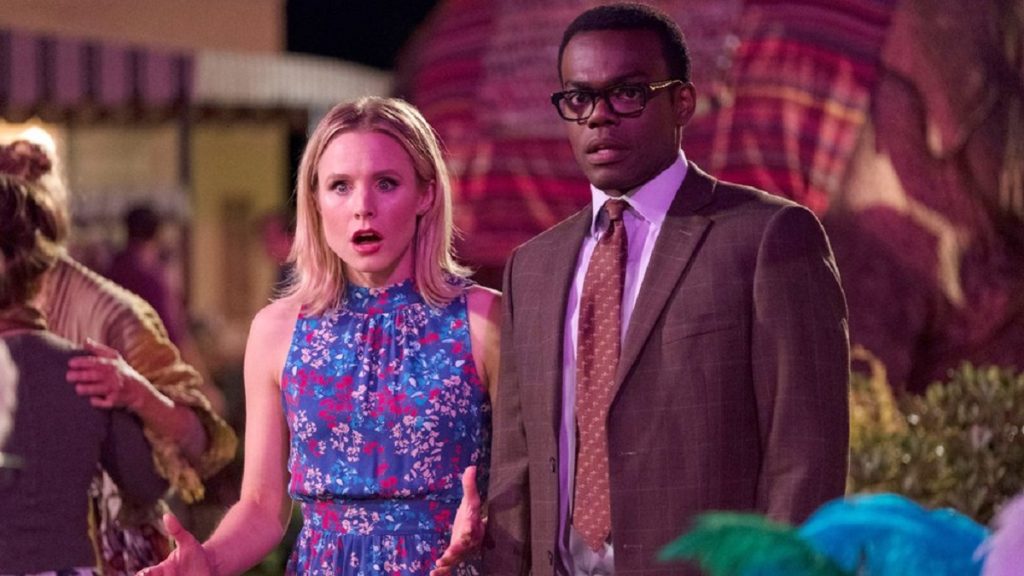 Wasn’t it your turn to watch Michael, Chidi?

However, Michael returns in a swanky red corvette with a blonde Janet on his arm. Sorry, she’s Jeanette in this scenario. He’s sporting a diamond stud earring. We’re in mid-afterlife crisis mode, people. He’s carefree and all about the fun. After going over the cons to this new and perhaps not-so improved Michael, Eleanor revisits Flashback Land. Only this time, she’s attending her father’s funeral.

We see Eleanor with her boyfriend observing her deceased father in his casket. Her mother waltzes in, wine glass in hand. She flirts with Eleanor’s boyfriend and urges her daughter not to shed tears over Papa Shellstrop. Once again, I can see why Eleanor is forked up.

Later, Vicky gives a rousing speech to her party goers. She informs the crowd of Tahani’s bash and her plans to attend said bash. Tahani dismisses her and forlornly tells the group they can stay at their own party. Poor Tahani is distraught at her own shortcomings, even though she knows it was all orchestrated by Vicky. Then, ’80s Michael gives his own speech. Vicky is taken aback by it, saying it wasn’t in the plan. However, Michael thought it would spice things up, and Vicky seems pacified…for now. 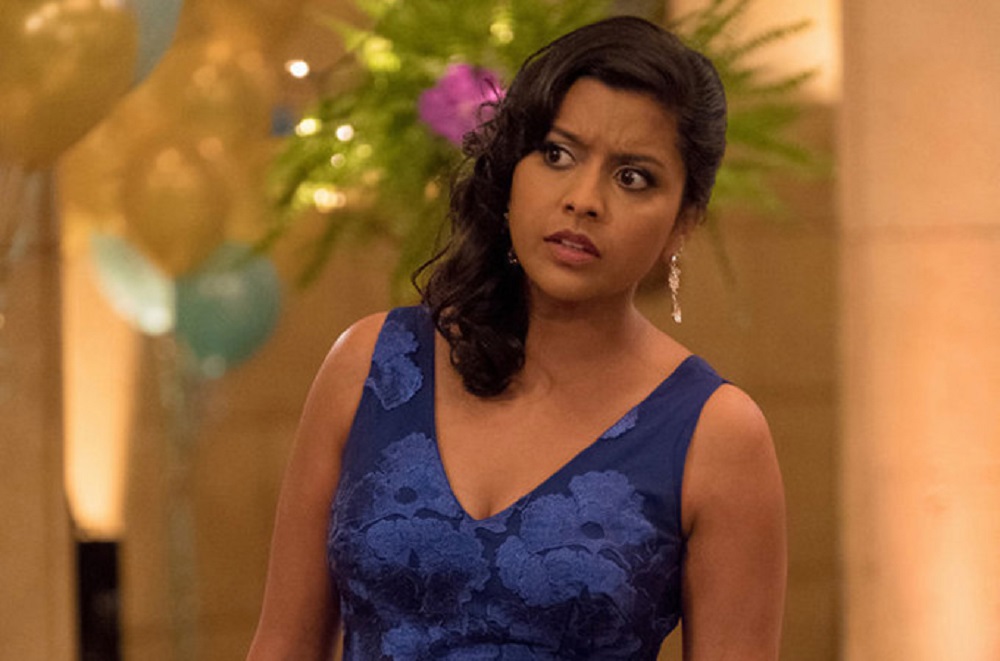 Then, Michael takes the party back to his place. He asks Jeanette to whisk them off to Dubai so they can continue to rage. Chidi and Eleanor attempt to rein him in for the evening. Chidi asks Eleanor if she ever truly felt the heavy hand of death while alive. Which results in…

Flashback time! Eleanor is standing in a Bed, Bath and Beyond. She notices a quartet of toothbrushes – two adults and two children. An employee informs her that it’s a family pack. Eleanor contemplates the meaning of family, of having a spouse and raising children of her own. She spirals into a black hole of mortality, the weight of her transience hitting her like a semi truck. She sobs into a plunger. Yeah, it gets messy.

Later, Eleanor sits with Michael and gives him advice on how humans handle the inevitability of death. She even mentions that wizened Bed, Bath and Beyond employee, who told her to cry it out. However, she still had to pay for the plunger. Michael appears to understand – yes, death is permanent. But you can’t live in fear of it. Eleanor is learning from Chidi after all!

Meanwhile, Jason comforts a forlorn Tahani. He regales her with one of many stories regarding his dope dance crew. Then, he sweetly compliments her on her abilities as a party planner and her general awesomeness. Jason is the sweetest of the sweet.

Later, Chidi gives Eleanor and Michael a rundown of the week – everyone’s highs and lows, as it were. Michael is slowly, but surely, assimilating into their little group. I like it when they’re all on the same side, even though Danson makes a splendid villain.

Then, we end the episode with another whopper. Tahani and Jason are in bed together after a night of partaking in the horizontal tango. Yes, they actually did it! Jason is ecstatic and immediately jumps at the chance to make Tahani cereal. Does this mean the duo could be actual soulmates?

The Good Place dived into some pretty deep waters this week. Existentialism, life and death. Afterlife and…after-death? We were given a much needed glimpse into Eleanor’s home life, as well as her thoughts on death. Of course, Danson stole the show with midlife crisis Michael. Not to mention, Tahani and Jason are too forking cute for words. This week made Michael part of the team, and I can’t wait to see what other shenanigans Team Cockroach cooks up. The Good Place is not only one of the funniest shows on TV right now, but also one of the smartest. That’s a fact.

Do you think Tahani and Jason will become legitimate soulmates? Will Vicky find out about Michael’s infidelity with the other side? Can Team Cockroach turn a demon into an angel? Join me next week as we keep The Good Place party train going, here on Geek Girl Authority.