DISCLAIMER: This recap of The Good Place contains more forking spoilers than the number of times Eleanor has ventured out to The Medium Place. You’ve been warned. Proceed with caution.

Welcome back, torturers of The Bad Place! Thursdays have been deemed holy thanks to the return of The Good Place. We’re only on episode 3, and already the scheming and shenanigans have been jacked up to an eleven. Michael’s evil plan has twisted in a direction I didn’t think plausible. Our quartet may actually be joining forces with the sinister architect as a new baddie takes shape – Vicky. Yes, former “good” Eleanor. And Denise. Vicky’s desire to overtake Michael and control all is so very…bad, for lack of a better word. Well, at least her afterlife is being spent in an appropriate setting!

Alright, Afterlife-rs, ready to delve into this week’s episode of The Good Place? Be sure to secure a Janet for all your afterlife needs, and please, avoid the clam chowder fountain at all costs. It really is just ocean milk with dead animal croutons.

We open with Michael (Ted Danson) commencing his daily notes via an antique recorder. Yes, this is attempt number 3 in the execution of his master plan. Inventing new and innovative methods of torture. Hey, they do say variety is the spice of afterlife. Eleanor (Kristen Bell) enters his office, thus setting Michael’s latest attempt into motion.

Then, Eleanor is introduced to Tahani (Jameela Jamil) at the big neighborhood party. It’s clear the two will once again go down the path of “frenemies.” Eleanor also meets Chidi (William Jackson Harper) by way of Janet (D’Arcy Carden). Chidi begins tutoring Eleanor, as we saw last season. 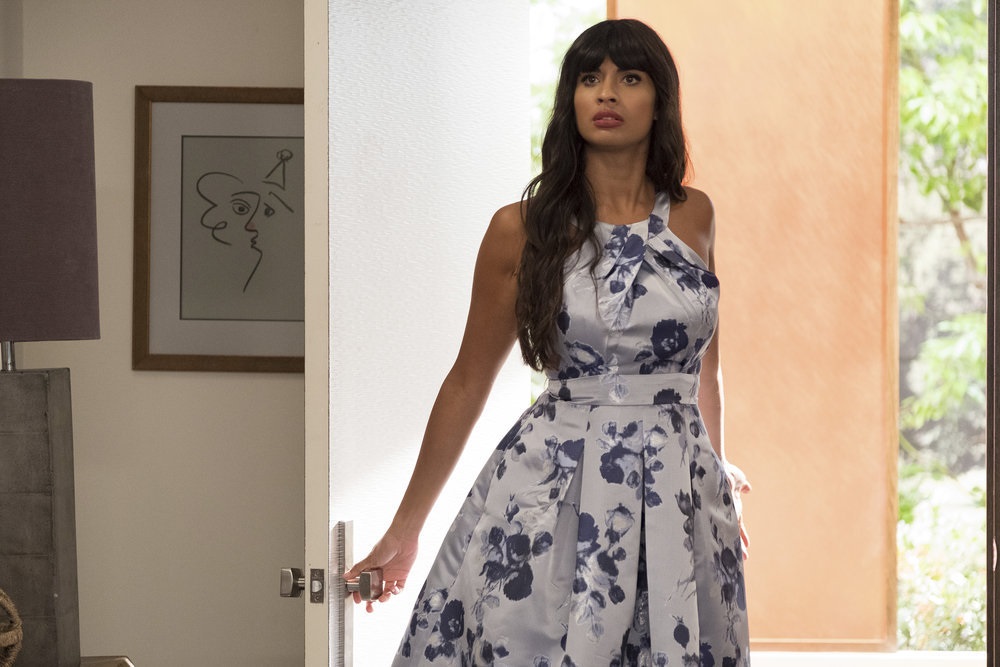 Later, we see Jason (Manny Jacinto) is standing with the other three in Eleanor’s house. A glowing obelisk looms before them. Michael informs them it knows one of the four doesn’t belong in The Good Place. Someone must accompany said obelisk to The Bad Place so equilibrium is once again restored in “heaven.” Suddenly, a light bulb goes off in Eleanor’s head. She knows this is really The Bad Place. Michael, exasperated, snaps his fingers and they’re back to Square One.

Then, we see Michael’s next attempt play out. Eleanor is paired with, surprisingly, someone who isn’t Chris. Sebastian (Jess Rowland) serenades Eleanor with a “three hour spoken word jazz opera.” Michael, Vicky and Janet are even playing instruments in the background. Now, that’s a band worth seeing. Eleanor immediately comes to the conclusion that she’s in The Bad Place. Uh oh. Here we go again…

Next, a montage commences, noting every failed attempt at pulling off alternative methods of torturing our heroes. We see Michael reboot Janet multiple times. Every single plan ends with Eleanor cracking the code, discovering her true whereabouts. I simply adored this montage. We were taken to new locales outside the normal neighborhood. The change of scenery injected some much needed vigor, and I’m hoping we’ll explore these places more. Plus, any chance for Carden to artfully display her comedic chops as Janet is one worth taking. 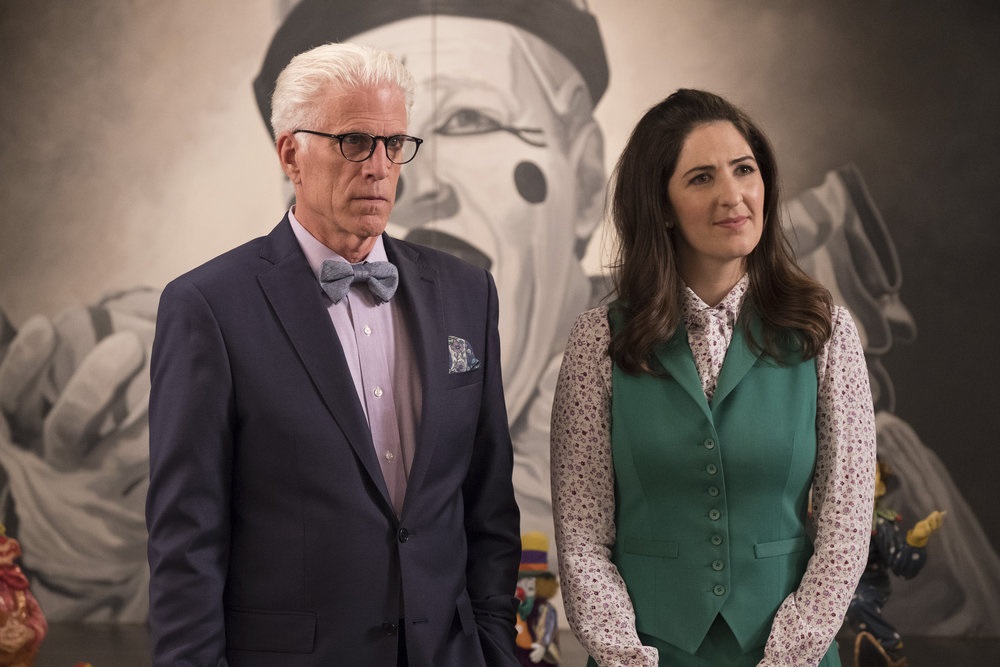 Also, during this montage I noticed the restaurants in their neighborhood changed, and the names of these establishments effectively murdered me. “Hokey Gnocchi,” for starters. “Sushi in the Banshee.” “Knish from a Rose.” One version where every restaurant name ends in “on a stick.” I’m a sucker for details, and I’m always tickled when a show like The Good Place takes care to add these intricacies for viewers to devour.

Now, we see Michael’s resolve beginning to fray. After attempt number 649 he appears disheveled and unkempt. He’s “stress eating.” Shawn, the Eternal Judge, believes he’s still on attempt number 2 and Michael has been feeding him lies.

Then, something remarkable happens. In a strange turn of events, Jason ends up making the “we’re in The Bad Place” discovery. Michael feels the proverbial straw breaking his back. Later Michael, who’s ready to commence attempt number 802, arrives in the neighborhood square to find only Vicky (Tiya Sircar). Vicky informs him everyone is on strike. They refuse to continue going along with his plan unless Michael is willing to meet them halfway. Can he satisfy their demands?

Next, Vicky meets with Michael in his office. He reads off the demands of the neighborhood. Vicky threatens Michael’s position, saying she’ll take control of the reins if the latter keeps failing. Her plan is already prepped for launch. Michael fires back, reminding her who’s in charge. I’d keep Vicky/Eleanor/Denise at arm’s length if I were you, Michael.

Meanwhile, Eleanor and Chidi are at the clam chowder fountain when they overhear a few Bad Place-rs overtly give away our duo’s true location. They even spot a demon without their human skin suit, prancing about like a sentient lump of lava rock. Eleanor beckons Janet, who teleports the pair to the same train that seems to run between worlds. 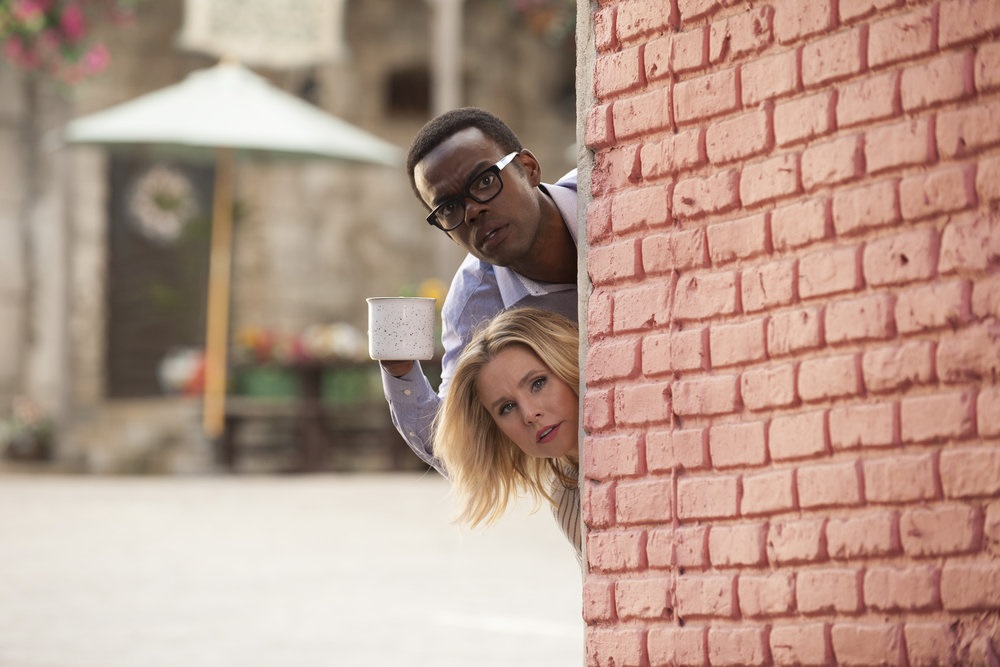 Finally Eleanor, Chidi and Janet arrive once again in The Medium Place. Mindy (Maribeth Monroe) greets them for the fifteenth time. Yes, they’ve arrived at her doorstep 15 times before. Mindy asks the trio for cocaine, which she apparently does all the time. Well, she did die in the ’80’s.

Then, Mindy explains how they’ve gone through all of this before – their plan to take down Michael. How they always end up returning to The Good Place to save their friends and our evil architect eradicates their memories. “All of this has happened before, and it will happen again.” Sounds like The Good Place has taken a page out of Battlestar Galactica‘s playbook.

Later, Michael is brooding on a seemingly serene bridge when Jason waltzes up beside him. Michael decides to ask Jason for advice. However, he drops the bomb that Jason is in The Bad Place first. Secrets never make friends.

Then, Eleanor and Chidi try to formulate a plan to stop Michael. As per usual, the duo argue over how annoying/sexy they find each other. Eleanor goes inside Mindy’s house in a huff. Mindy then reveals that she’s heard Eleanor rant about Chidi 15 times. She evens plays a “sex tape” of Eleanor and Chidi post-coitus, revealing their love for each other. Apparently, they’ve done the horizontal tango countless times. Eleanor can’t seem to wrap her head around the concept of her loving Chidi. Flustered, she tells Chidi they’re going back to The Good Place. 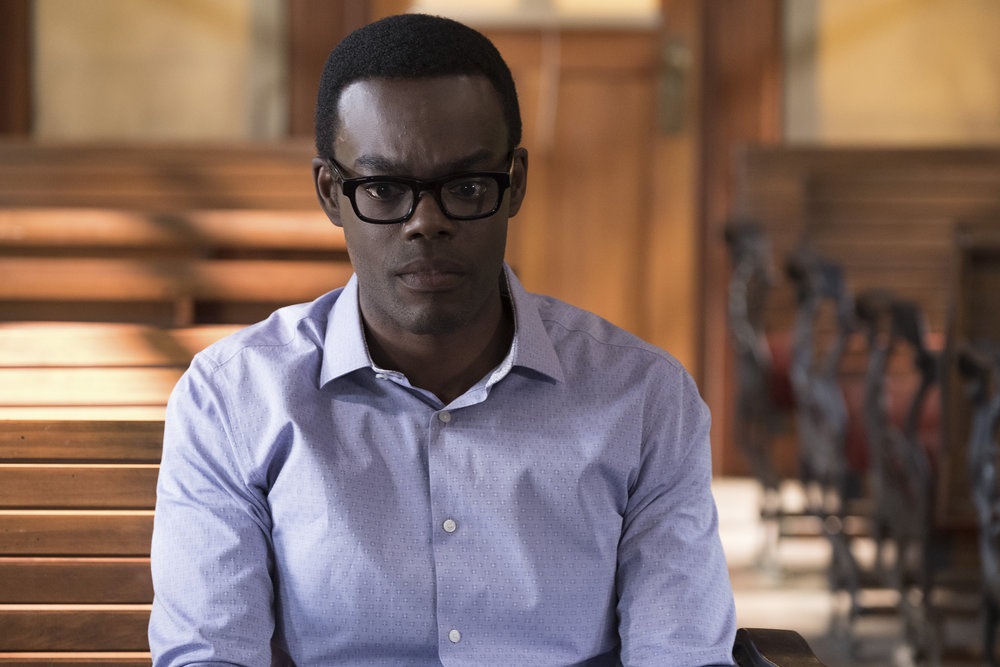 Between a Chidi and a hard place.

Meanwhile, Jason regales Michael with a story about his former crew in Florida and how they formed a dance group. Long story short, his anecdote (if you can call it that) gave Michael much needed clarity in the Vicky power struggle. Jason pats himself on the back for a job well done. You go, Jason!

Later Eleanor, Chidi, Tahani and Jason stand before Michael. This is how their story always ends, before another cycle begins. This time Eleanor comes in guns blazing, preparing to vanquish Michael. However, our architect has another ace up his sleeve. He wishes to join forces with our quartet and take down Vicky. Holy shirt! Plot twist! 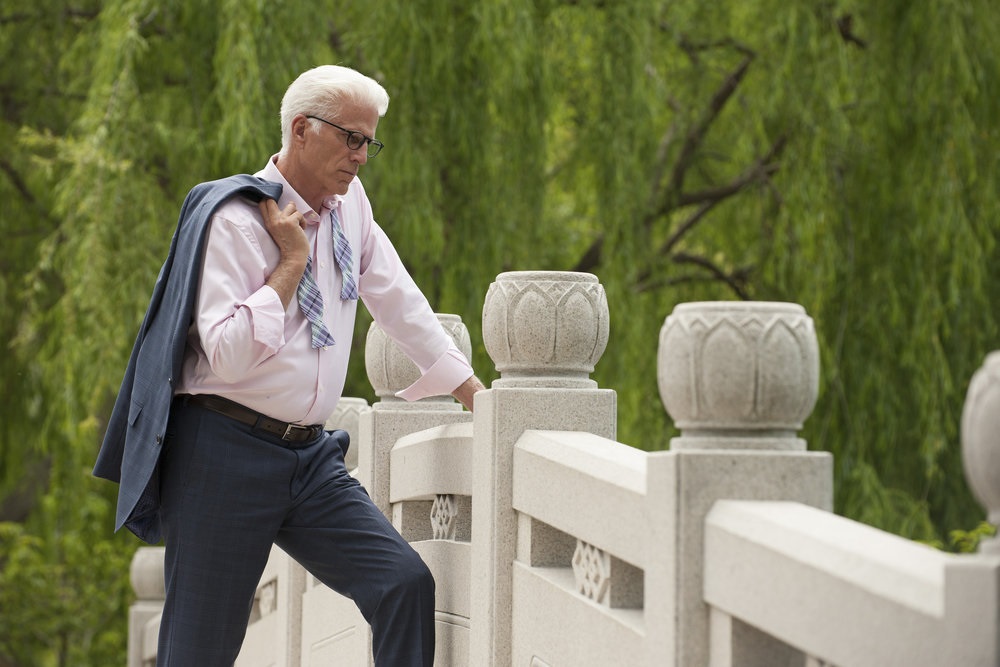 When you’re the architect, you can brood on whatever forking bridge you please.

This show always puts a smile on my face. Everyone was in top form this week – Danson is always a delight as Michael, the positive thinking perfectionist hellbent on perfecting the art of misery. Monroe is absolutely hysterical as Mindy, and I hope we see more of her cocaine-loving ’80’s self. The Good Place is more than adept at the occasional plot twist, and this week we saw Michael meet his match in the insatiable Vicky. My, how those forking tables have turned.

Do you think Michael will actually join our gang to take down Vicky? Moreover, will Eleanor take the bait? Will we see Chidi and Eleanor finally acknowledge their feelings for each other? Where is our Janet/Jason wedding? Can Vicky be defeated, and will our gang break the memory erasure spell? Join me next week as I continue to recap The Good Place, here at Geek Girl Authority.