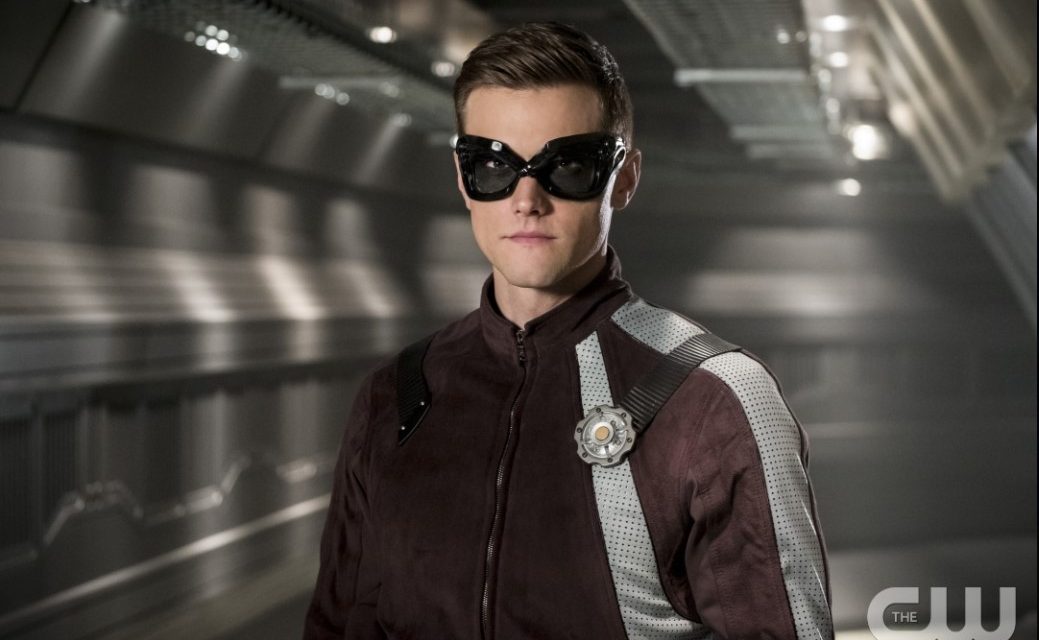 Read the Latest Recap of THE FLASH, “The Trial of The Flash”

In “The Elongated Knight Rises,” Barry adjusts to prison life. We all know how strong Barry is, but even prison can get the best of us. And Team Flash has to find a way to keep going without Barry. Barry has been imprisoned before, in the speed force. The team got through that ordeal, but…this is different…

“Henry West was here. So was Barry.”

Barry sits in his cell as chaos ensues in the prison. A couple of inmates are fighting the guards. Barry can’t just sit by, so he quickly moves the inmates to their cells and the mini-riot is over. Barry marks the days on the wall next to his dad’s signature.

Meanwhile, Joe (Jesse L. Martin) is handling a robbery in Central City. Three hostages are held by a man with a bomb. Ralph helps out by removing the hostages then swallowing the bomb. Problem solved, but in the most goofy way possible. Oh and Ralph never did get s superhero name.

Back at the prison, Barry meets Axel Walker (Devon Graye), the Trickster’s son. He kidnapped Barry’s dad once. Axel is eating pudding and says it tastes funny. He starts feeling bad and goes to his cell. A guard takes him to the nurse because the pudding made him sick. The nurse aka Axel’s mom knocks out the guard and breaks Axel out of jail.

Barry is tripped up in the prison yard and blamed for splashing mud. Warden Wolfe (Richard Brooks) saves him from getting into too much trouble. And to also let him know that Iris is there to see him. Iris (Candice Patton) is happy to see Barry, but so sad that they can’t even touch hands. She tells him that they are doing everything they can to get Barry out of jail quickly. Their visit is cut short as all inmates are told to go back to the cells.

The Trickster, Prank, and Junior

Joe visits the prison because of Axel’s breakout. He briefly talks to Barry. Barry really wants to help with the case, but Joe tells him to lay low and stay out of trouble.

So here’s the story. The Trickster James Jesse had a girlfriend, Zoey Clark (Corinne Bohrer). She went by the name Prank. She’s pretty smart and the beneficiary to Clark’s Toys. Prank was The Trickster’s sidekick until the 90s and then disappeared after he was arrested. She returned with Axel. After Joe briefs the team, they all break up to do some further research to find Axel and Zoey.

Zoey takes Axel to the Clark’s Toys warehouse. Axel asks about his dad. Zoey tells him that James broke out of jail over a year ago and left town. She tells Axel that James doesn’t care about them. And she never wanted Axel to end up like James. Axel says he will get his Dad’s attention. He plans on going after Ralph.

Trickster hijacks the city’s broadcasting system. He starts blowing things up around Central City. He demands the “stretchy man” or he will blow up more of Central City. Ralph is excited.

Cisco vibes Ralph to Trickster’s location. They make fun of each other’s outfits before Trickster starts throwing things at Ralph. Ralph deflects all of his tricks except for one. Axid, acid mixed with a ingredient X. The substance burns Ralph’s knee. Cisco has to vibe in to save Ralph.

Barry is confronted by a group of prisoners. One of them pulls a knife and says they will get Barry for talking to the cops. A big guy, Big Sir (Bill Goldberg) steps in and protects Barry. Later Barry asks Big Sir why he helped him. Big Sir says Henry West helped him.

Zoey made the ingredient X for Axel. Axel is upset that the stretchy man is still alive. Zoey tells him that he can be better than Trickster Senior. Axel is excited because his mom is helping him. They start working on a plan to kill the stretchy man.

At S.T.A.R. labs, Joe asks the team if they’ve found the Trickster. Harry (Tom Cavanagh) says he’s not a meta human so it’s harder to find him. They get a video message from the Trickster. He introduces Prank. They have hostages that they plan to kill. They demonstrate their acid shower on Beebo! NOT BEEBO! Prank says they want the stretchy man or the hostages die.

Cisco tracks them at the Clark Toy’s factory. Harry is working on a solvent to counteract with the axid. Joe has CCPD set up a perimeter around the toy factory. Iris tells Ralph to suit up. Cisco hands him a new supersuit. Ralph refuses to suit up because he doesn’t want to get hurt again. He says he’s not strong enough to face that kind of danger.

Ralph makes a trip to visit Barry to break Barry out of jail. Barry says the cameras will catch him escaping. Ralph tells Barry about his encounter with Axel and the axid. He’s afraid of dying. Ralph says he’s not fearless like Barry. Barry says he’s not fearless. And now that he’s in jail, he can’t help people. He hates that. But Ralph has the ability to help people. Barry tells him to rise above his fear and believe in himself. Ralph has to leave when the inmates are let out for exercise.

Barry follows Big Sir to find out how his dad helped him. When Henry was in jail, he shared a cell with Big Sir. One night Big Sir, or Dave, was in a lot of pain. Henry knew his appendix had burst.  There was no time to call a guard so Henry did the surgery in the cell. Big Sir says he owed Henry and now they are even.

Big Sir walks away from Barry and into an ambush. Barry sees the group of men beating up on Big Sir. He steps in and strategically uses his speed to knock them out, saving his new friend.

Trickster and Prank are keeping the axid in a galvanized steel container on the roof of the factory. Team Flash prepares to move into the toy factory, including Killer Frost. Cisco and Harry figured out a trigger for Caitlin to easily turn into Killer Frost. The name of her childhood bully, Lexi LaRoche. Harry will go to the roof to neutralize the axid while Frostie and Vibe save the hostages. 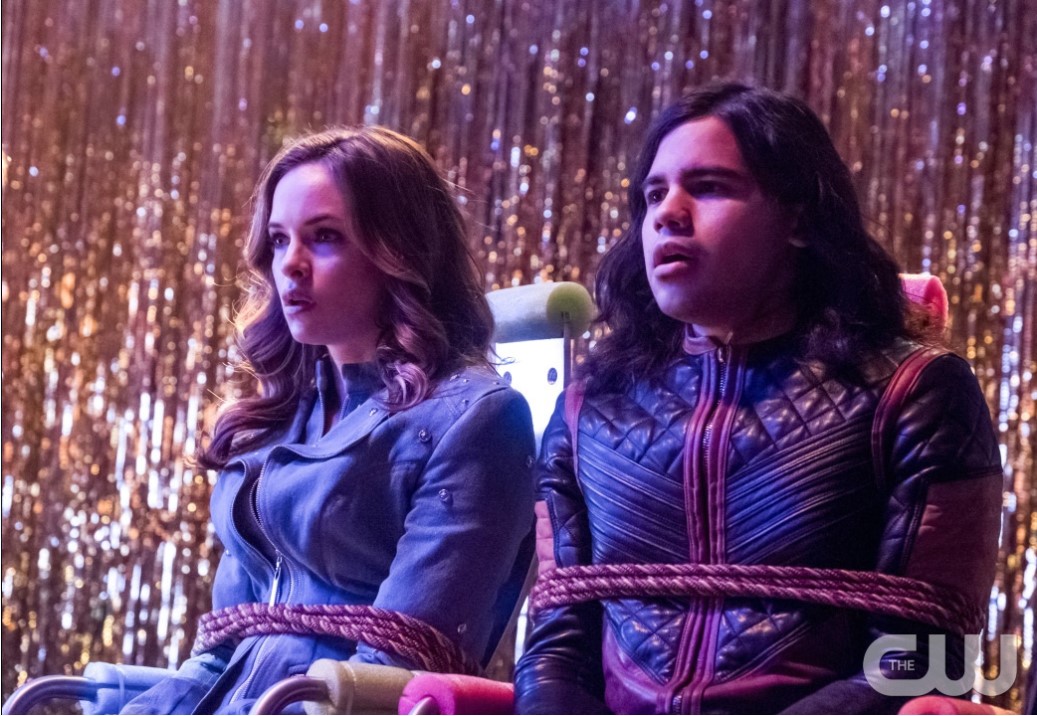 Killer Frost and Vibe enter the toy factory where the hostages are tied up and wearing hoods. When they remove the hoods, it’s Trickster and Prank. The evil mother-son duo put inhibitors on Frost and Vibe. Now they are the hostages. Iris radios into Harry to let him know that she is on her way to help rescue them. Ralph walks in and says he’s going instead.

Trickster and Prank start broadcasting again. They have Caitlin and Cisco tied up and are ready to spin the wheel of death. The wheel stops between choices. The Trickster decides to let them die together.

Ralph bursts in through the roof in a NEW supersuit. Axel says he thought Stretch had chickened out. Ralph says he did, but a friend reminded him to be fearless. He’s there to rise, even if it kills him. Axel attacks and Ralph is able to knock him out. Prank releases the axid on Caitlin and Cisco. Ralph shields Caitlin and Cisco with his body, fully expecting to be burnt alive. Ralph is okay though. Harry neutralized the axid just in time.

Joe takes Trickster and Prank away. Ralph gets all of the media attention. While talking to the press, they dub him “The Elongated Man.” Of course Ralph hates it. He asks Joe what he should do next. Joe tells him to help protect the city.

Barry and Big Sir walk through the courtyard. Barry says he didn’t get involved for a favor, he just wanted to help. Big Sir says Henry would be proud of Barry.

Iris comes for a visit to let Barry know of Ralph’s heroism. She thanks Barry for talking to Ralph.  Iris gets sad again because she can’t touch him. Barry vibrates his hand through the glass so they can hold hands.

Ralph and Cisco hang out at Jitters. They go back and forth about who’s going to pay when a young girl (Jessica Parker Kennedy) slaps down some cash. She says she is paying it forward and start babbling about fate and being in the right place at the right time. Cisco and Ralph think she’s weird, but nice. She sits back down at her table and watches as they walk away. She continues to write something down. Two things about this girl:

OMG! Barry and Iris make me cry! I’m so ready to Barry to be free. This is heartbreaking to watch. THEY ARE NEWLYWEDS FOR CRYING OUT LOUD!

I’m so happy Ralph got a new suit. His other suit was ridiculous!

Who is this little girl? There is a fan theory…I’m pretty sure it’s right. Is this Barry and Iris’ daughter traveling through time? What is her purpose? And what is that symbol writing about?

Overall, this was a fun little episode for Ralph to finally find his superhero mojo…and new supersuit. Ralph is goofy, but he’s got a good heart.

Now…let’s get this Thinker taken care of and get Barry out of jail! Please!?