THE FLASH Recap (S03E19) The Once and Future Flash 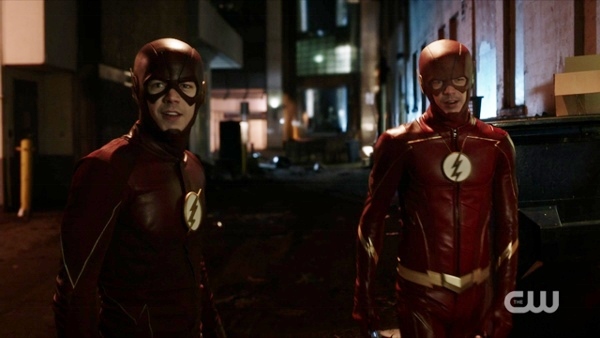 Previously on The Flash, Barry was so close to finding out the true identity of Savitar.  The villain Abra Kadabra taunted Team Flash before being taken away by Gypsy.  Barry decided to travel to the future for answers.

Abra Kadabra injured Caitlin during their battles. She had some complications with her injure and died.  Julian tried to save Caitlin by removing the necklace that inhibits Killer Frost.  Caitlin quickly recovered and became Killer Frost.

To find out how we got here, check out the recap for the last episode of THE FLASH, “Abra Kadabra”

Barry (Grant Gustin) and Iris (Candice Patton) are at home thinking about the future.  Barry figures he needs to go to 2024 to find out how he defeats Savitar.  Iris is thinking about Joe (Jesse L. Martin). She makes Barry promise to be there for Joe if things don’t go their way.  Barry gets an alert from STAR labs. 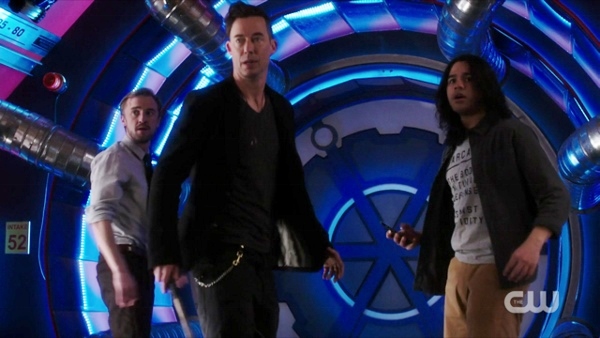 Caitlin (Danielle Panabaker) is in full Killer Frost mode. She shoots her frosty powers at Cisco (Carlos Valdes), HR (Tom Cavanagh), and Julian (Tom Felton).  Julian sees the necklace that suppresses her powers.  Killer Frost destroys the necklace before Julian can get to it.  Julian tries to appeal to Caitlin, but Killer Frost is in total control. He tells her that he cares about her.  Killer Frost goes in for a kiss.  Cisco uses his Vibe power to throw her off of Julian.  The three guys run to the pipeline and hide in a cell.

There’s just one problem.  Killer Frost can open the door with Caitlin’s palm scan.  She prepares to kill the three guys.  The Flash arrives and stops her. She is happy to see him so she can kill him too.  Flash pushes her back out of the pipeline.  He tells Caitlin that she can fight this.  Killer Frost says she doesn’t want to.  She builds an ice wall and escapes.

The Team assembles to figure out what to do next.  Cisco blames Julian for releasing Killer Frost.  Julian argues that it was the only way to save her.  Barry stops them from fighting and tells them to take a break.

Barry tells the Wests that he has to go to the future now.  Iris tells him not to, not with Killer Frost on the loose.  Barry says he won’t be gone long. He can come back around the same time he leaves. He asks Wally (Keiynan Lonsdale) to help him by using his speed to throw Barry into the future.

It works.  Barry arrives in 2024 and immediately encounters trouble. Top (Ashley Rickards) sees him and puts him in a vertigo trance.  The Mirror Master (Grey Damon) beats up The Flash and reminds him that Central City is his now.

Barry gets away and goes to his old apartment.  Future Cisco finds him and takes him to STAR labs.  The future Barry Allen lives there and he doesn’t want to be disturbed.  The team fell apart after Iris died.  Everything and everyone reminded Barry of Iris.  He told them all to leave. 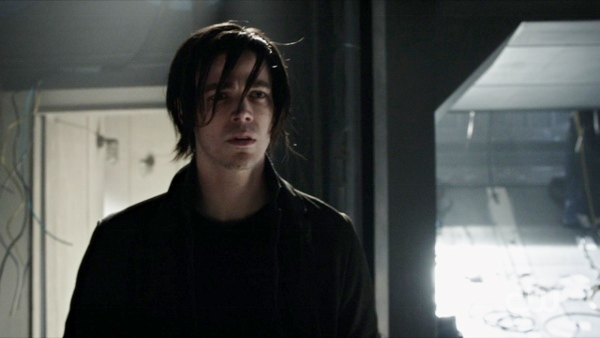 Barry 2017 attempts to return to the past. Cisco asks him to stay. They don’t have a Flash anymore and could use one more than ever.

Barry can’t gain enough speed to get home.  He asks for Cisco’s help. Barry thinks maybe the Mirror Master and Top has something to do with his speed.  They seemed different.  Cisco tells him that a lot is different.

For starters, Cisco lost his hands in the battle with Killer Frost.  He created cybernetic hands for himself, but lost his vibing powers.

Barry asks what happened to Julian, Wally and Joe.  Cisco takes him on a trip to see what life is like without the Flash.

Julian works in a lab. He watches over Killer Frost. She let go of Caitlin Snow and never looked back.  Barry gets a chance to talk to Killer Frost. He apologizes for letting Caitlin down. He says he will go back and help her.  Killer Frost says he’s no match for the God of Speed.  Killer Frost teamed up with Savitar. She says he helped her embrace who she really is.  Barry realizes that Killer Frost knows who Savitar really is and she’s not telling. Killer Frost tells him to ask Wally.

Barry and Cisco go to the West house.  Wally was very upset by Iris’ death.  He went after Savitar by himself.  Joe found Wally all beat up. Wally is paralyzed and catatonic.  He hasn’t spoken in eight years. 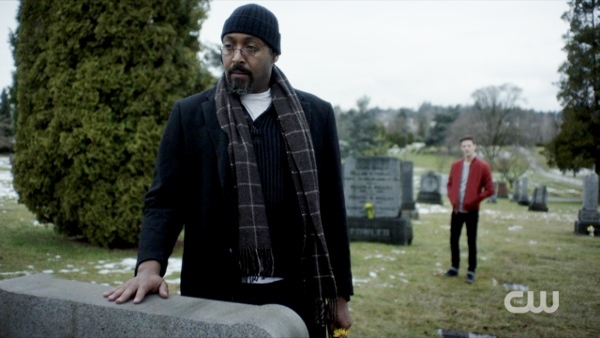 Joe is at Iris’ grave. Barry tries to talk to him.  Joe won’t face him.  After Iris died and Wally got hurt, Joe lost the one person who he need the most. Barry.  He hasn’t seen or spoken to Barry in eight years.  He’s angry at Barry and tells him to leave.

Barry goes back to STAR labs and confronts his future self for abandoned Joe and the rest of the team.  Barry 2024 says he was just as broken as Joe was.  He tells Barry 2017 that he will go back and do everything he can to stop Savitar. No matter what he does, Iris will die in his arms.  Iris is the love of his life. Barry 2024 says he had nothing.  Just the need to defeat Savitar.  He says Barry won’t be there for Joe, Wally or Caitlin.  Savitar wins because everything Barry loves is gone…including himself. Barry 2017 leaves.

Barry tells Cisco that he has to go back.  Cisco asks what about the team.  Barry says that he can’t help any of them.  Cisco says no matter what he does, Barry always abandons them.   That’s why he put an inhibitor near Barry. The inhibitor slows down Barry’s speed.  He wants Barry 2017 to stick around. Cisco misses the team…he misses his friend.

Barry starts to leave for the past.  He changes his mind and stays. Barry doesn’t like what the future has in store for him or his friends.  He asks Cisco to help him fix things and put the team back together…even HR.

HR is on a romance book tour.  He’s loving the attention that he’s getting from the ladies. The Flash takes him back to STAR Labs before he even knows what’s going on.

The Flash grabs Julian and Joe.  Barry tells them that he shouldn’t have pushed them away. If anything, Iris’ death should have brought them closer together.  This isn’t what Iris wanted and he won’t abandon them again.

An alert goes of.  Mirror Master and Top are moving again.  Cisco tells them that they need to do something about it. He needs some hope in his life. He needs them and they need each other. Team Flash is back together. 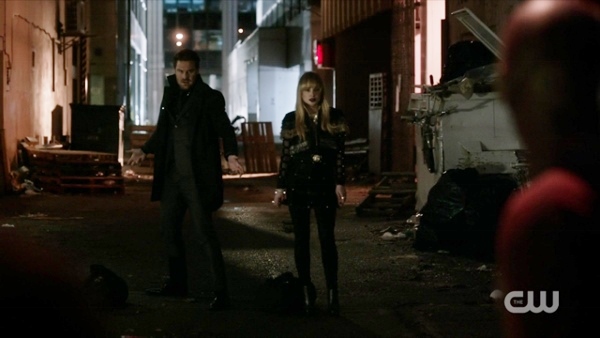 Barry 2024 comes forward and takes the inhibitor to Barry 2017. The two Flashes aren’t affected by Top and Mirror Master anymore. They each go after the duo and take them into custody.

The news reports the apprehension of Top and Mirror Master and the happy return of The Flash.  Cisco and HR are excited to have the team back together. Barry 2024 says it was a good first step.  He says he heard what Barry 2017 said and he’s right.  Iris would have wanted them to remain a family.  He realizes that he let Savitar win by pushing everyone away. He says he’s ready to try again if the team is ready. Joe hugs him.  Julian and HR say they are in as well.  The team heads out for coffee.

Barry 2017 asks Barry 2024 how he trapped Savitar in the Speed Force. Barry 2024 says he had help from a physicist named Tracy Brand. She made the speed force trap.  The only problem is that in 2017, Tracy hasn’t figured out the technology yet.  Barry 2024 gives Barry 2017 a small disc with Tracy’s work on it.  He tells Barry 2017 to find her and maybe she can decipher the disc.  If not, hold onto Iris as tight as he can and make some good memories with her.

Barry 2017 says goodbye to future Cisco. He says he will do something to fix Cisco’s hands.  They are BEST FRIENDS FOREVER!

Barry returns to 2017 and tells the Team that he didn’t find out who Savitar is, but he has a lead.  Julian asks about Caitlin. Barry tells them that she aligns with Savitar. They have to find her before they lose her forever.  Everyone moves to look for Caitlin.  GO TEAM FLASH!

Barry makes sure to hug Joe and tell him he loves him.  He promises that no matter what happens, he will always be there for Joe.  Joe says he knows that. 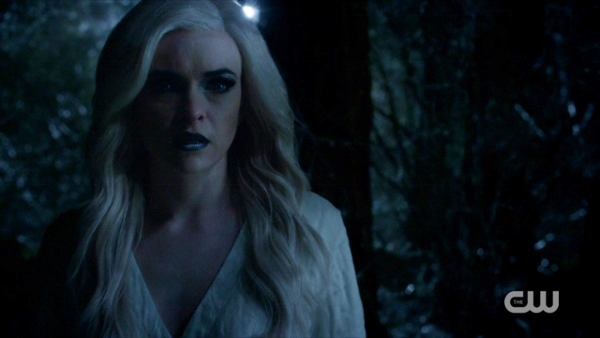 Killer Frost is walking around in the woods…of all places. She reaches a clearing and Savitar is waiting for her.  He offers her salvation. Killer Frost thinks he wants to turn her back into Caitlin Snow. Savitar says he wants to make sure Caitlin never returns.  She asks why she should trust him.  Savitar’s armor opens up and someone steps outside of the suit. Killer Frost knows this person.  She asks what Savitar needs her to do.

What is life like for Team Flash if there is no Flash?  Iris is dead, Wally is a vegetable, Joe and Cisco are trying to hold it together, Julian is trekking along, Future Barry is just as dead as Iris and Caitlin is lost forever.  The one person who seemed to thrive from the disbanding of Team Flash was HR.  Hmmmm…I’ve always been suspicious of HR.

I did not want this episode to end! I want…no I need to know who Savitar is!  I’ve thought it was HR, Wally, even possibly Iris herself.  At this point it could be anyone.  This person knows the team well…their strengths and weaknesses.  Savitar is also someone who Killer Frost would immediately trust, but would Caitlin Snow trust them?  WHO IS SAVITAR?!