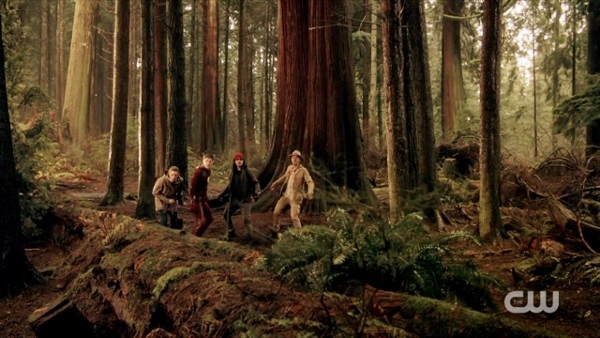 The Flash is on a mission to Gorilla City to save Earth Two’s Harrison Wells and to prevent a future headline from occurring.  Jesse Quick is back and ready to make a bold move with Wally

Barry is hoping that this will give him a chance to stop the gorilla attack on Central City.  One of the headlines from the future that the team wants to stop in hopes of saving Iris (Candice Patton).

Upon arriving, it’s clear that the gorillas were waiting for the team. They are captured and taken to the dungeons of Gorilla City.  Grodd has the ability to take over a person’s mind and speak through them.  Grodd explains that he used Harry to lure the Flash.  He needs the Flash to kill King Solivar, who is planning to invade Earth One.  Solivar fears humans.  Solivar visits the prisoners and challenges them to a fight in the arena. Barry volunteers to fight Solivar but only if he guarantees that he will let them go. 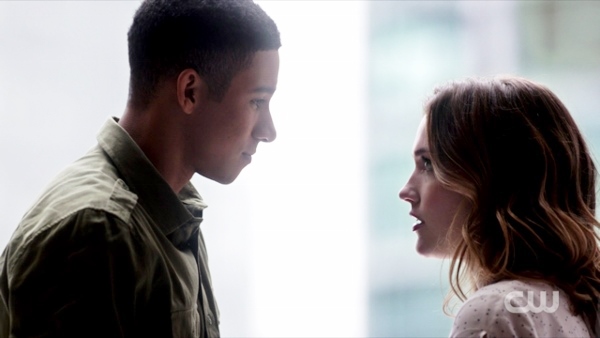 Wally (Keiynan Lonsdale) is happy that Jesse is back on Earth One.  Barry tells them to stay behind and protect the city.  Jesse isn’t too excited about Wally’s speedster abilities.  Kid Flash shows off for Jesse Quick, making matters worse for Jesse and Wally.

Wally confronts Jesse about their distance.  Jesse thinks he doesn’t have time for her since getting his powers. It’s like his complete now that he is a speedster.  He tells Jesse that he’s not complete without her.  (awwwww…) Wally asks Jesse to move to Earth One to be with him. Jesse says no.  She thinks they are on different paths. 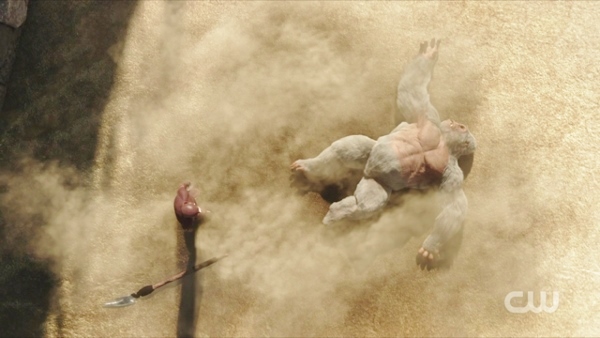 Barry wins but spares Solivar’s life.  Grodd immediately knocks out Barry and sends him back to the dungeons.  When Barry wakes up, Grodd reveals that he tricked Team Flash.  His true purpose was to bring the team to Gorilla City, have Flash kill Solivar, and use Cisco’s abilities to transport his army to Central City.  Grodd is now King of Gorilla City.

Jesse mistook HR for her Dad when she arrived on Earth One.  So it’s only natural that she would confide in him when dealing with Wally.  Jesse says that Wally is on his own journey, that she thinks doesn’t include her.  And her dad is still missing.  When he comes back, she would feel bad telling him that she’s leaving.  HR says when it comes to love, to go for it.  Otherwise she will live the rest of her life with regret.

Team Flash on Earth Two are trying to figure out a way to stop Grodd from using Cisco to get to Earth One.  Cisco says he would literally have to die to stop Grodd.  He suggests that Caitlin use her powers and go full Killer Frost. Julian says no!  He’s true reason for going on the mission is to keep Caitlin from using her powers.  Barry uses Cisco’s idea to trick Grodd.  Barry pretends to die.  Grodd check to make sure that Barry is dead and drags his body out of the cell.  He says that he doesn’t need Barry and storms off. 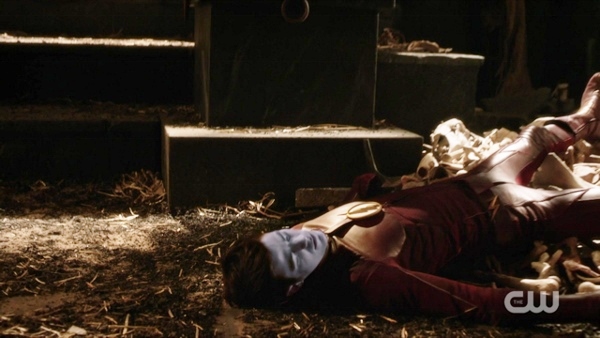 Barry is able to warm himself up by vibrating. He jumps up, frees everyone and uses his speed to get them far away from the city.  Just as Cisco is opening a portal, they hear the gorillas coming for them.  They jump through the portal.  It closes before Grodd can reach them.

Team Flash is safe back on Earth One. Harry and Jesse are reunited.  Harry forgot that HR is there.  He credits HR for contributing to the plan that saved him.  Cisco tells him that HR is not a genius like Harry.  In fact, he has no scientific talent at all.  Harry asks why he’s still there. Cisco says HR still contributes to the team. All is well for now.

Jesse tells Wally that she is going to tell her dad that she wants to move to Earth One.  Wally kisses her to let her know he likes her idea. They are interrupted by HR and quickly leave to be alone.  HR knows that Harry is going to upset by Jesse’s decision.

Julian apologizes to Caitlin for over-stepping.  Caitlin says that she likes him and likes that Julian likes her.  She is afraid of her powers and doesn’t want to hurt anyone close to her.  She tells Julian to be afraid of her.  He suggests that they be afraid together over dinner.

Barry gets some alone time with Iris. He tells her that he is confident that they can beat Savitar.  He plans on living a long life with Iris.

Back on Earth Two, Grodd prepares his army to invade Earth One…with help from Gypsy.

That escape was too easy.  The team should know that.  And they have to assume that every meta they meet, especially those who can cross dimensions, will eventually show up.

Of course Grodd had a back up plan.  He’s super smart, he was trained by Harrison Wells and Eobard Thrawne, and he is determined to get his revenge on Team Flash for sending him away from his home.

And this will all become evident when Grodd attacks Central City next week, via Gypsy.  I hope she helps Cisco save the city.  I like her.

Check out the trailer for next week’s episode of CW’s The Flash!!