The Flash races to stop a meta with a deadly touch.  A headline from the future comes true causing Iris to fear for her own future. 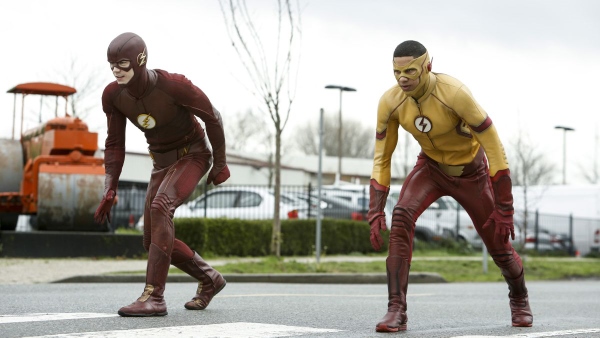 Who’s the fastest man alive? The Flash or Kid Flash? Cisco (Carlos Valdes) and the gang take bets during a training exercise. Wally (Keiynan Lonsdale) comes in a very close second to Barry (Grant Gustin).  Only because Barry can phase through walls.  A skill that Wally hasn’t learned yet and has trouble understanding.  Barry is unsure of how to teach him.

Barry and Julian investigate a strange murder at Luigi’s Restaurant.  Iris (Candice Patton) is shaken up.  Luigi’s restaurant is in one of the headlines from the future.  Iris admits that she is scared, but she still doesn’t want to tell Joe (Jesse L. Martin).  Joe is planning on meeting his girlfriend, Cecile’s (Danielle Nicolet) daughter.  He asked Wally, Iris and Barry to be there with him. Iris doesn’t want to ruin his future by making him worry about hers.  Barry reassures her that he will find a way to change her future.

A second murder occurs. The body of the victim is strangely burnt.  Just like the body found at Luigi’s. Barry recognizes the name of the second victim and asks to see a picture of the first victim. Both were cops in Flashpoint. Julian (Tom Felton) thinks he can find evidence of the killer, but they have to do it quickly.  The first body turned to ash in a matter of hours. 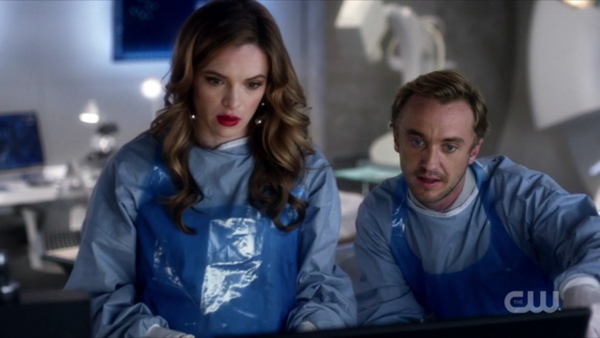 Julian and Caitlin (Danielle Panabaker) run tests and discover that the men were killed by a met that Julian created as Alchemy. The meta’s touch can cause anyone to disintegrate.

Barry tries to talk Joe into postponing the coffee date.  He thinks the killer is targeting CCPD officers from Flashpoint. Joe is not worried.  Wally and Barry will be there if anything happens. This date is very important to Joe.

The West family meets Cecile and Joanie (Riley Jade) at Jitters.  Joanie doesn’t have much to say about school or her major, but she does like to talk about Kid Flash.  Wally loves having fans and Barry seems a little jealous. 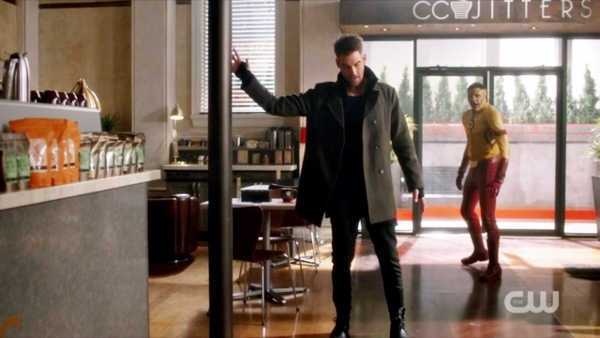 The conversation is interrupted when Caitlin and Julian call Barry to tell him that the killer is Clive Yorkin (Matthew Kevin Anderson).  Seconds later, Yorkin shows up at Jitters looking for Joe.  Wally is able to slip away and come back as Kid Flash.  Barry waves his arms to signal to Wally to use his tornado arms to fight of Yorkin.  Saving the day and getting praise from Joanie.

Barry insists that Joe stay at STAR labs to avoid running into Yorkin.  Joe is not afraid of him.  Iris is shook up and decides to tell Joe about her future death.  Joe is very angry that the team kept that from him. He is especially mad at Barry. Barry knows exactly how much Iris means to Joe, having grown up with them.

Julian feels responsible for Yorkin. Caitlin tries to tell him that Yorkin is not his fault. Julian says some hurtful things and Caitlin leaves him alone. 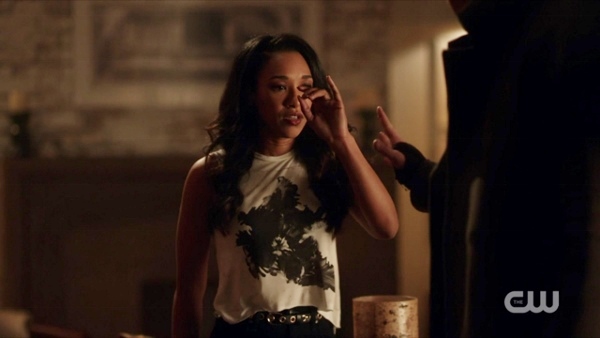 Iris is at home, trying to get in touch with Joe when Yorkin shows up.  She sets off her alarm and Wally rushes to her apartment. He isn’t fast enough to save Iris from being touched.  He rushes her to STAR Labs and the team goes to work on stopping the disintegration.

Barry is upset that no one alerted him to Iris’ danger. The team discusses their options to slowing down the decay.  Caitlin has to freeze Iris’ arm to keep it the decay from spreading.  She’s scared she will lose control as Killer Frost. Iris tells her that she trusts her and she knows that Caitlin is stronger than she thinks.  Caitlin begins the process of freezing Iris’ arm and Wally walks away.

Wally feels bad about not being fast enough to save Iris.  He says he’s not ready. Barry says it’s on him too.  He apologizes for being a bad teacher.  He says he doesn’t know how to inspire and empower Wally to use his raw talent to the best of his ability.  They agree to continue to train so that Wally will win the next time he’s on his own.

HR and Cisco come up with an idea on how to find out who Yorkin is going after next. Somewhere there is a universe where Flashpoint still exists.  Cisco wants to vibe to that universe and into that Flashpoint.  There they can see who hurt Yorkin and who is his next target. 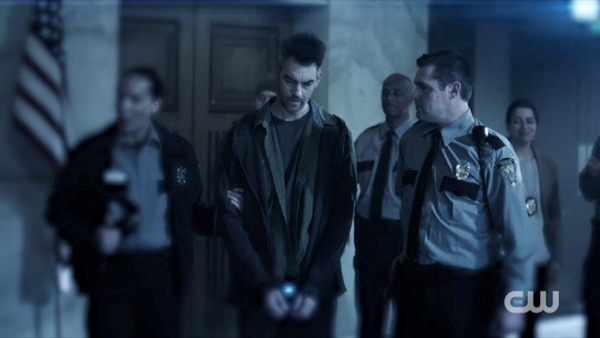 The vibe works. Cisco is able to see Yorkin being brought into CCPD.  Joe, Mendes, Holzman and a lady cop named Stone were responsible for capturing Yorkin.  Laura Stone is a PI in this universe.  Joe knows her and goes out to warn her.

Joe finds her as she is watching a couple. They have to follow the couple and board a train to discuss who is after Laura. Yorkin is close by and sees them board the train together.

Back at the lab, Julian says he may have figured out a way to stop Yorkin’s powers.  Barry discusses the matter and they figure out that Barry’s blood could counteract Yorkin’s blood.  Barry and Wally’s blood have reconstructive properties that helps them to heal faster.

Yorkin uses his ability to bring down a bridge onto the train tracks. His plan is for the train to crash into the rubble and hopefully killing Laura and Joe.  Barry comes up with the idea to phase the entire train through the rubble to avoid anyone getting hurt.  It works, but Barry is drained.  Wally has to face Yorkin alone. 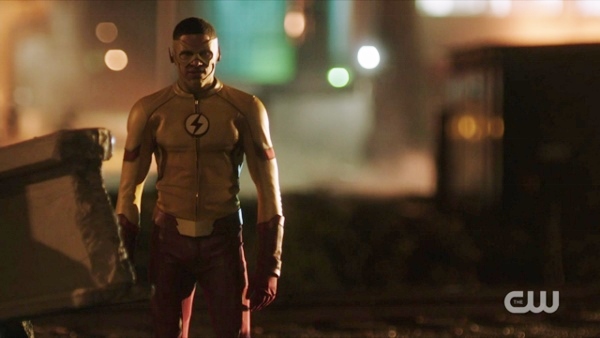 Barry instructs Wally that he has to phase his blood through Yorkin.  He is very encouraging and tells Wally to believe in himself. Wally cuts his hand and races towards Yorkin.  He phases through Yorkin.  Yorkin grabs Wally by the arm, thinking he will die instantly.  Wally smiles because his blood reversed Yorkin’s abilities to become non-existent.

Back at STAR Labs, Julian and Caitlin were able to use Yorkin’s new blood to cure Iris.  She thanks everyone for helping her.  Joe reminds everyone that when they don’t keep secrets from each other and work together, they can win.

Caitlin thanks Julian for keeping her grounded when Killer Frost almost took over.  She said she got her strength from him.  He says there’s one more meta that he created and he needs to find him. Julian changes his mind when Caitlin asks him to go for a drink.

At home, Iris tells Barry that she felt a little disconnected from him as the Flash. The Flash was always saving other people. Now that he has saved her, she not afraid to face the future.

Wally is practicing his phasing ability when a portal opens up. Jesse Quick (Violett Beane) emerges and frantically tells Wally that Grod has taken her dad to Gorilla City. 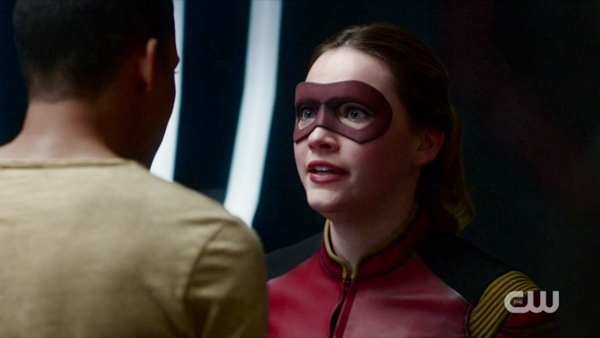 Lots of foreshadowing of Joe having to chose between Barry and Wally.  The bet at the beginning of the episode, Joanie asking who was better…looks like that choice will have to be made soon.

I like that there is a lot of focus on Iris, but I’m also afraid that Team Flash is going to lose this battle.  I’ve said it before, losing Iris will have a major impact on everyone on the team.  It could make for an interesting Season 4 if she were to actually die.  Of course I don’t want her to die.  She’s becoming a strong character.  We need more strong female characters on TV.

Ok, I noticed the sparks between Caitlin and Julien back in December. Now those sparks are obvious.  And with Robbie Amnell coming back for an episode, will that be what makes Killer Frost take over?  My guess is that Caitlin will have to chose to be good with Julien or Killer Frost with Ronnie.  And she will chose Ronnie.

The Flash returns Tuesday February 21!  Check out the preview as the team heads to Gorilla City: