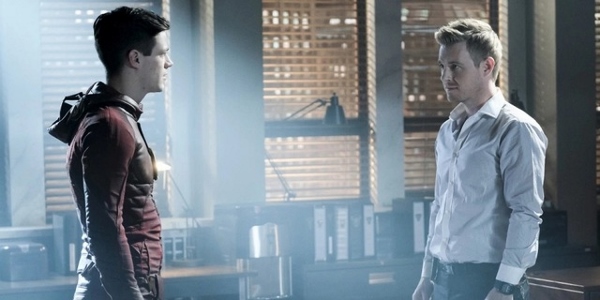 Savitar returns in the lastest episode of The Flash.  The team discovered that Savitar was held captive in the Speed Force.  He needed the Philosopher’s Stone to get out.  Savitar messed with Wally’s mind and manipulated Wally into giving him the final piece of the stone.  In return, Savitar trapped Wally in the Speed Force.

Savitar’s prophecies are coming true.  One will die (Iris), one will betray the group (maybe Caitlin) and one will suffer a fate worse than death (Wally).

Click here for a full recap of The Flash “The Wrath of Savitar.”

In the trailer for next week’s episode, “Into the Speed Force,” Barry promises Iris that he will get Wally back.  HR warns Barry that the Speed Force is a crazy place.  With help from Cisco Barry is able to go inside the speed force.

Barry encounters some weird things.  Barry will face ghosts of his past.  Eddie Thawne, Ronnie Raymond and Captain Cold himself, Leonard Snart are all inside the Speed Force.  They appear to be reminders of mistakes Barry made in the past.  Earth 2’s Flash, Jay Garrick enters the Speed Force to help Barry.

This is going to be a trippy episode. Check out the trailer: