Get ready! It’s time for this years best Overheard at Dragon Con quotes! It’s a week after the event and I’m still recovering from Dragon Con! Those that attend the event know exactly what I’m talking about. Dragon Con is a full on, massive, all day/all night, five-day party. This year marks my sixth year at the best con on the planet. It’s a truly unique experience and is like no other con.

I worked and played. I participated in six panels including hosting two of my own shows. My 5 Truths and a Lie storytelling show and podcast had to turn at least 100 people away, most of them dedicated Earpers! We had Katherine Barrell, Dominique Provost-Chalkley, Matt Fraction, Rick Worthy and Deric Hughes spinning yarns. All incredibly good storytellers and the show was hilarious and quite dirty in some part but hey, it’s Dragon Con. I also did a live recording of my Booze and Phasers podcast with Thrilling Adventure Hour’s Mark Gagliardi, Brian Bradley and Matt Soule. Once again, dirty, fun and ridiculous! I’m excited to get those podcasts up!

Dragon Con start earlier this year. I got there on Thursday and the party was already started. Incredible cosplayers, gaming, people watching, early panels and cocktails! When I left Monday, there were still con-goers in cosplay, gamers neck deep in their campaigns, panels and, of course, cocktails. What does this mean? A long list of Overheard at Dragon Con! I’m shocked by the amount but so incredibly happy that people were posting! It was quite a fun challenge sorting through the posts this year because there were so many! Most of them made the list and all of them show the true magic of Dragon Con. Enjoy!

Read all or our Dragon Con 2017 coverage, here!

These first few Overheards have a theme. Jesus. Yes there were quite a few Jesus’ this year. More than usual and they blessed the con with nerdiness and love.

#OverheardAtDragonCon we lost Jesus have you seen him?

Deadpool Jesus is dancing around the Christian protesters. #overheardatdragoncon

#OverheardAtDragoncon @DragonCon (Full elevator doors’ open to Jesus):There’s no room for you here Jesus. Jesus: You denied me three times😂

#OverheardAtDragonCon why does the chicken have a lightsaber?

“Are you asking me to hot glue something onto your HEAD?” #overheardatdragoncon

“How did you come up with the idea for a gender-bent uncle Fester?!” #OverheardAtDragonCon

Also #OverheardAtDragonCon: “I know we were gonna clean up the conversation, but that was 48 oz. of beer ago!”

I was in the military. I poop wherever I need to poop. #OverheardAtDragonCon

Overheard at DragonCon: “If you need a really good onesie, I’ve got you.”#overheardatdragoncon #DragonCon2017

“Everybody knows you never leave a wine glass next to a wig stand.” #OverheardAtDragoncon

#OverheardAtDragonCon “And then my dick was just like BAM.”

#OverheardAtDragonCon – it’s been real, it’s been fun, but I’m going to get drunk and forget you all.

“Have you seen my Molotov cocktail?” #OverheardAtDragonCon

Snoring starfish get their own beds at con. @DragonCon #overheardatDragonCon

Dude 1: My everything hurts Dude 2: Must be Monday after DragonCon. #overheardatdragoncon

@DragonCon #overheardatdragoncon “by the time we where done, the cadavers leg fell off”

#OverheardAtDragonCon “If I ever see another Pickle Rick…”

“I can show a graph of magnetic field lines and get a laugh! Achievement unlocked.” – #DC2017 #SpaceTrack #OverheardatDragonCon

“We are all Kevin Bacon!” #overheardatdragoncon

“Did you see a dinosaur walk pass here?” #OverheardAtDragonCon

‘I’ve already cried twice today. It’s the last day. I’m so mad at myself for mocking this.’ @DragonCon #overheardatdragoncon

#overheardatdragoncon “That is so fucking extra. His costume doesn’t even glow on the show.”

There’s like a mouthful of alcohol left someone drink it. @DragonCon #OverheardAtDragonCon #lastmorning #checkout

#OverheardAtDragonCon “if the ceiling leak was a pregnant woman, it’d probably be time to head to the hospital.” #MentalImagesYouDidntNeed

So, a large group of cosplaying “Doctor Whos'” is called a “Tardis” of Doctors??? #OverheardAtDragonCon

“We need some lube, hand me a Tastykake.” #overheardatdragoncon

“We were going to fuck but we ended up getting lightsabers instead.” #overheardatdragoncon

‘HECK YEAH! ‘ Random dude picking up a condom (wrapped) off the sidewalk outside the Hyatt. #overheardatdragoncon

“Everything is ‘lick on’ if you believe in yourself.” #OverHeardAtDragonCon #wait #ISaidThat

Arguments over which Star Trek film is best while standing at/using the urinals. #overheardatdragoncon

“We were at the end of our gaming campaign, so we decided to just destroy the planet.” #overheardatdragoncon

“No, I have a poncho for my tail in case it rains” #overheardatdragoncon #DragonCon17 @seelix

#OverheardAtDragonCon “oH MY GOD NO THAT TV IS LAYING ON THE GROUND IS IT DEAD?!”

“She popped, locked and dropped but not in the order” @DragonCon #overheardatdragoncon

If you still need more, then visit our 2015 and 2016 editions of Overheard at Dragon Con!

RELATED: The Best of “Overheard at Dragon Con” 2016

One last thing, I found my calling this year: 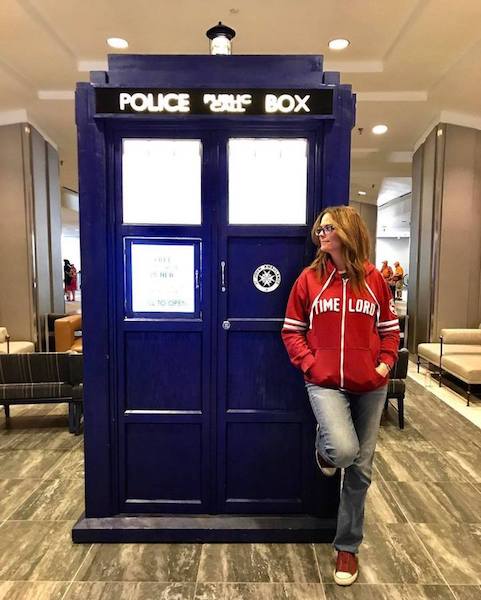