The Best Halloween Movies of the ’90s

Halloween is, undoubtedly, the most wonderful time of the year. Let there be no protest – you know this to be true. When the clock strikes 12 on October 1st, I immediately transform into a witch. Specifically, a Gothic witch who travels back in time to the ’90s. Does my affinity for ’90s Halloween movies stem from the fact I grew up in that decade? Most likely. However, another potential reason is because they’re the best representations of the spirit of the season. Again, this brooks no argument since, deep down, you know the truth is very…true.

Now, I’ve compiled a list of the very best in ’90s Halloween movies. Peruse at your leisure. Watch your favorites on repeat. Get your spooky on. Just be sure to have a broomstick handy, in case you need to suck the souls of little children for eternal youth and must travel long distances in a pinch. 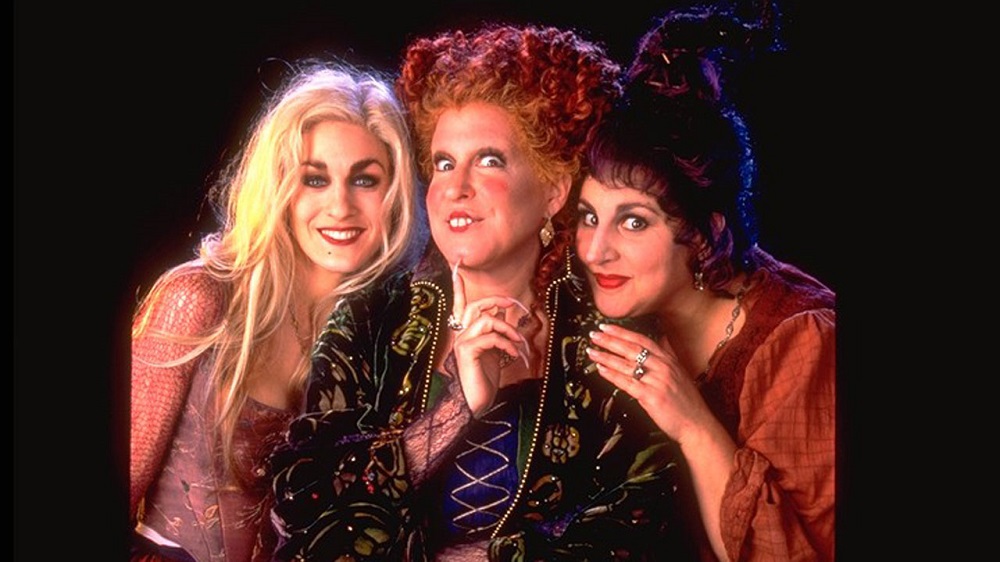 “Another glorious morning. Makes me sick!” is a sentence uttered by Winifred Sanderson (Bette Midler) that immediately won my heart. Hocus Pocus is, to me, a quintessential Halloween film. If I don’t have my annual viewing of said film, then Halloween simply ceases to exist. The Sanderson sisters are fabulous, not to mention comedy personified. We were blessed with Midler belting out “I Put a Spell on You,” which is now a Halloween tune staple. Hocus Pocus makes me want to travel to Salem, Massachusetts solely because they seem to take Halloween very seriously. So many ghoulish decorations! Hocus Pocus is just pure, unadulterated fun. The epitome of Halloween. Amok, amok, amok! 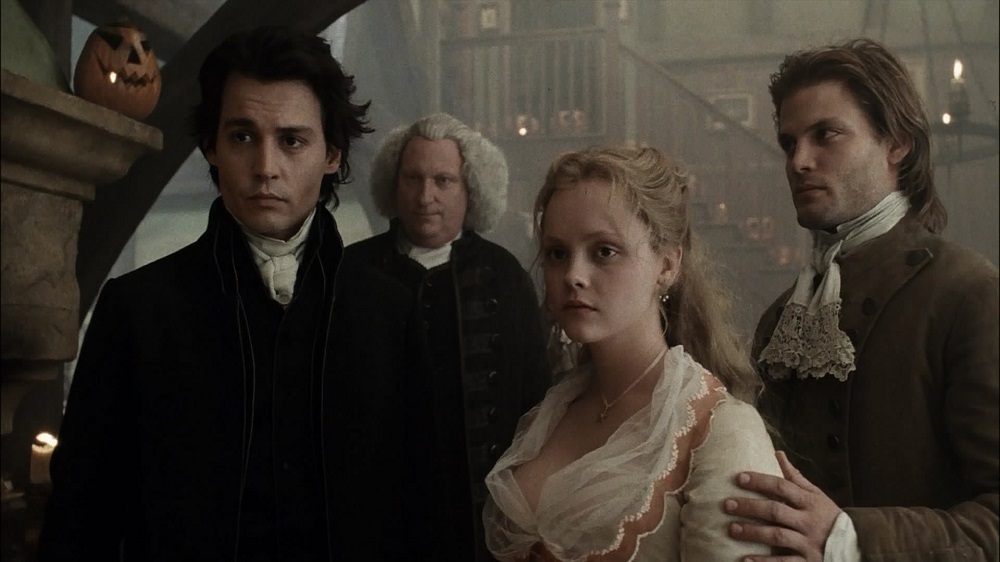 Heads will roll. Sleepy Hollow aired during the reign of Johnny Depp. It’s also one of the many films Depp collaborated on with the King of Avant Garde, Tim Burton. If you love gore, fantasy, mystery and horror, this flick is for you. Sleepy Hollow puts a spin on the story of Ichabod Crane (Depp) by sending him to Sleepy Hollow to investigate the decapitations of three victims. Of course, all of said decapitations were committed by the Headless Horseman (Christopher Walken). If you’re easily frightened, I recommend not watching Sleepy Hollow with the lights off. 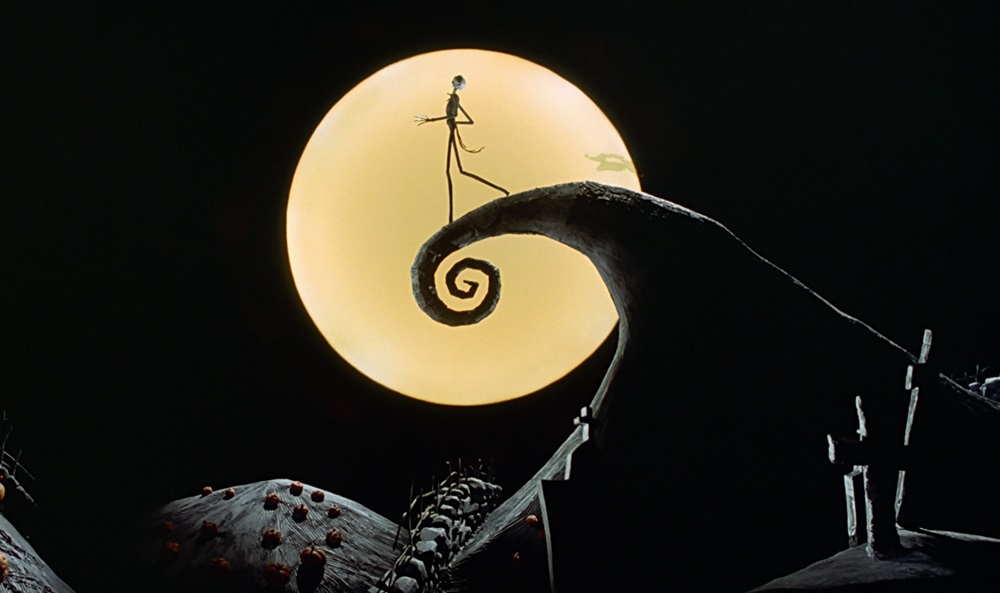 “Oh somewhere deep inside of these bones…”

Seriously, I should dub this list an homage to Tim Burton. Quite a few if not all of his movies fall into the Halloween category, especially the ’90s films. Anyway, The Nightmare Before Christmas is a multipurpose movie – you can watch it around Halloween and Christmas. Double the double toil and trouble! This film not only boasts beautiful claymation but also a very catchy musical repertoire by Danny Elfman. If you waltz into any Hot Topic it’ll appear The Nightmare Before Christmas exploded in there. However, I’m perfectly content with this. It’s a terrific film with a terrific message: Halloween is better than Christmas. That is the message, right? 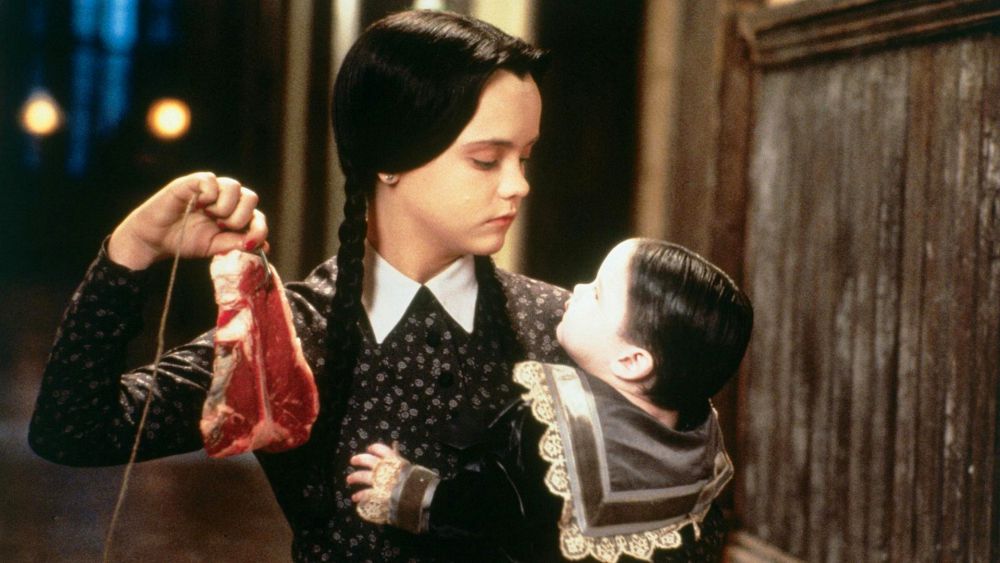 Accurate portrayal of me during the entirety of October.

RELATED: 15 Pumpkin Carvings to Geek Up Your Halloween 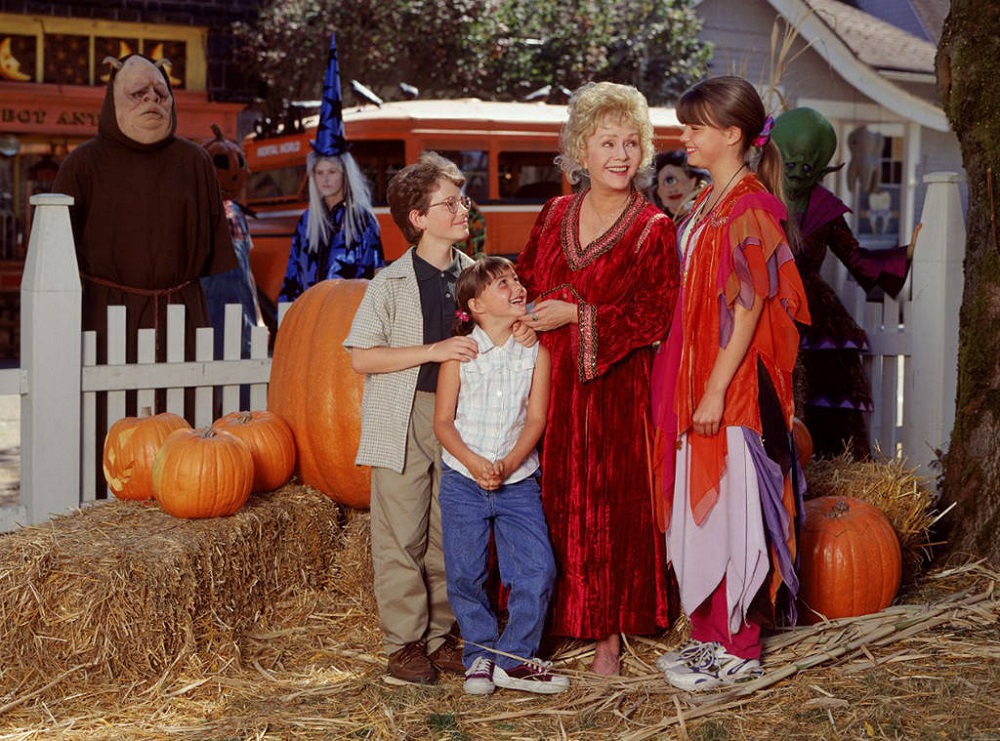 This movie is a Disney classic, hands down. Kimberly J. Brown is Marnie Piper, and any replacements are merely frauds. Of course, Debbie Reynolds (RIP) as Aggie Cromwell is the pitch perfect witch-y grandmother. I always secretly hoped that someday I’d discover I was a witch who hailed from a town solely dedicated to Halloween. Then, I could use my newly developed powers to save all the creatures that call Halloweentown home. My sidekick would be Benny, the skeletal taxi driver, and we’d rule the roost. Essentially, I’d live out the plot to Halloweentown. Well, I suppose I’ll have to settle with living vicariously through a fictional film. 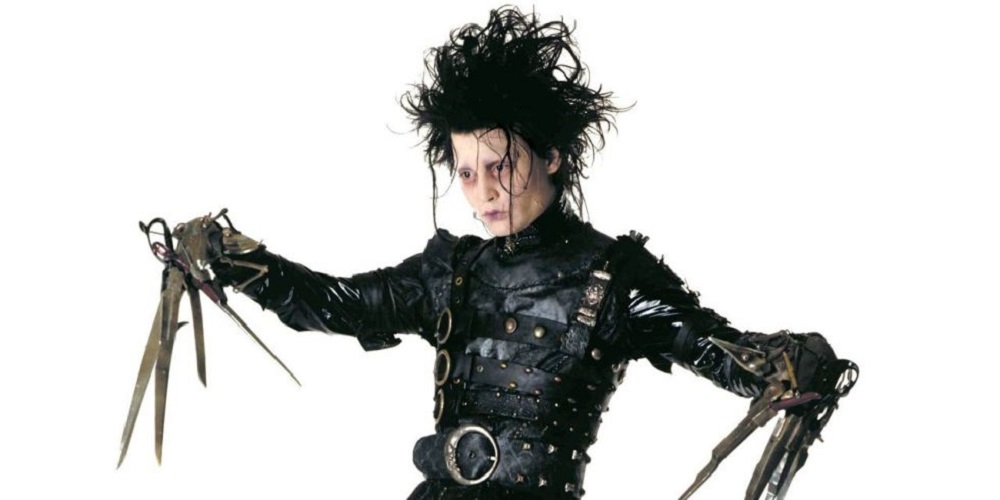 Hair cuts are free, but color will cost you…

If you’re looking for someone to trim your hedges (and your hair), look no further. Edward Scissorhands became a relatable movie for social outcasts and romantics alike. Depp’s star was on the rise when the 1990 film premiered in theaters. Winona Ryder, who played the ingenue Kim, was also on the brink of stardom. Yes, Edward had razor sharp blades for hands, but at least he possessed a gentle demeanor. Edward Scissorhands is rife with brilliant social commentary. “Never judge a book by its cover” is definitely the most prominent. More so, it’s just fun. We could all use a hefty dose of fun nowadays. 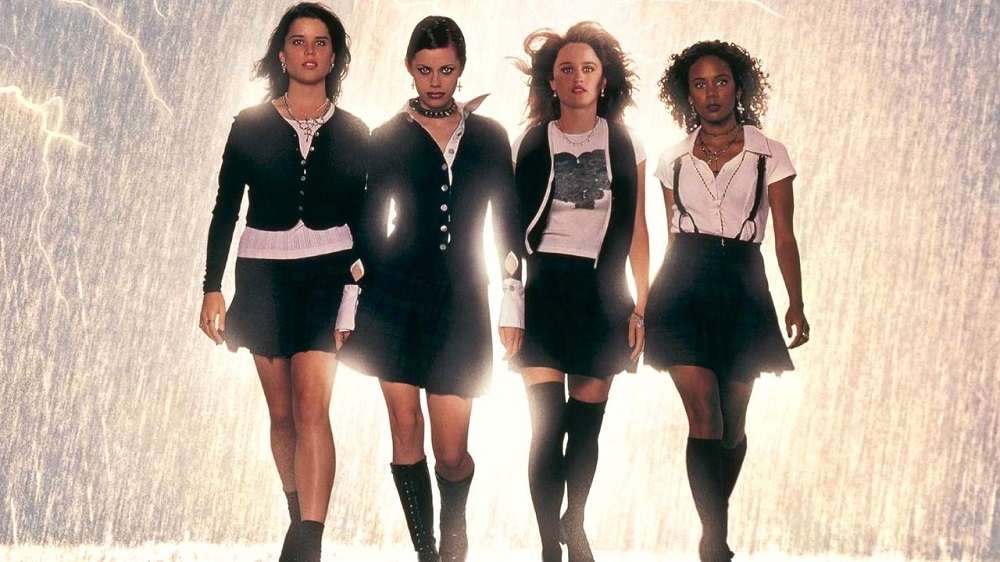 Ours is the power, indeed. The Craft is quintessential ’90s Los Angeles – even the witchcraft aspect of it. When I say that every Halloween I transform into a ’90s Gothic witch, I mean I become indistinguishable from the witches in The Craft. This film played on the same theme as Edward Scissorhands, as well as countless other films from years past. Everyone is different, and that’s what makes us special. Treat others how you want to be treated – that timeless Golden Rule. If you love magic, you’ll certainly find it in abundance here. Also, if teenage snark is your thing, then you’ve hit the jackpot. I had a mini revelation the last time I watched The Craft. If Neve Campbell and Skeet Ulrich aren’t in it, is it really a ’90s genre flick? Which leads me to my next film… 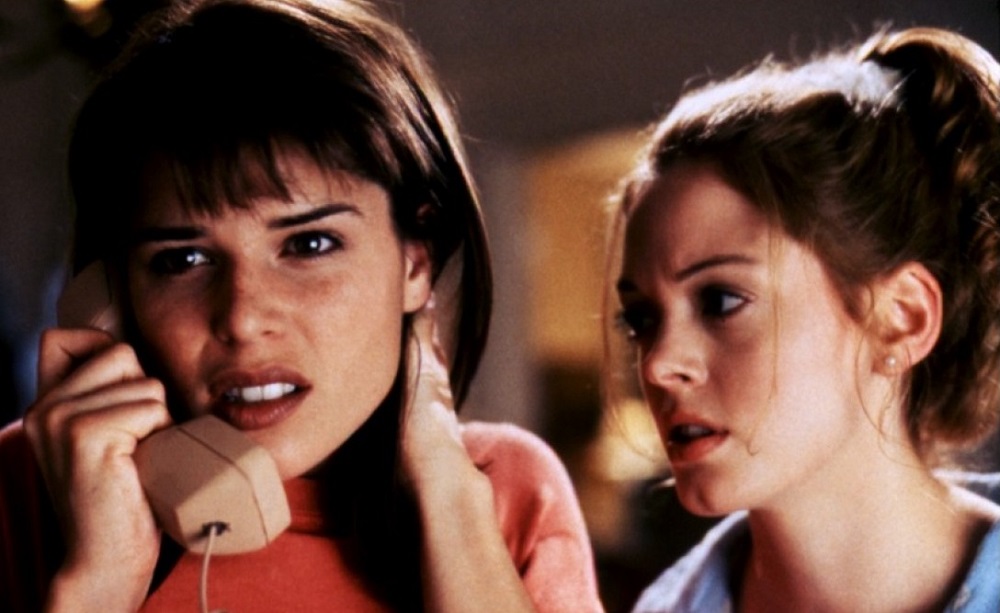 The call is coming from inside the house…or is it?

Wes Craven (RIP) is, without a shadow of a doubt, the King of Horror. Scream is proof of that. Campbell and Ulrich return to the big screen in Scream, where virtually everyone dies. Also, Drew Barrymore famously bites it in the first scene. Horror movie tropes abound in this flick, not to mention blood, blood and more blood. If you love to scream, Scream will induce all the, um, screaming. This film also blessed us with a Courtney Cox who was in the midst of her Friends run. You should watch the trilogy with Campbell, but bear in mind that the first film is always the best. That’s just a standard movie trilogy rule. 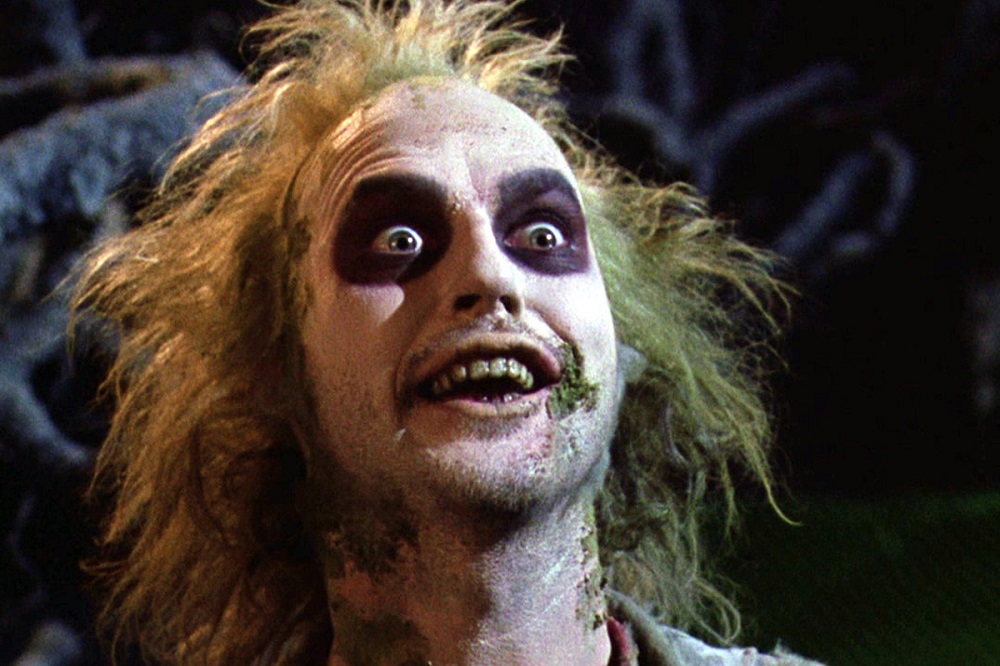 Now, I’m very much aware that Beetlejuice aired in 1988, hence why it’s listed as my Honorable Mention. However, the Beetlejuice film helped spawn the cartoon series shortly thereafter so that has to count for something, right? Michael Keaton brought a larger than life presence to the titular Beetlejuice, making him fun to watch and strangely believable. Never has a film made such light out of something as morbid as death. There’s singing and dancing in the afterlife, apparently. Watch Beetlejuice to escape the grim reality we’re currently enveloped in. Just please, don’t say his name three times.

That’s all I wrote! Now, if you’ll excuse me, I must continue my preparations for the most sacred of all sacred days, Halloween. Are there any films you adore that aren’t listed? Be sure to sound off in the comments!

This article was originally published in October 2017