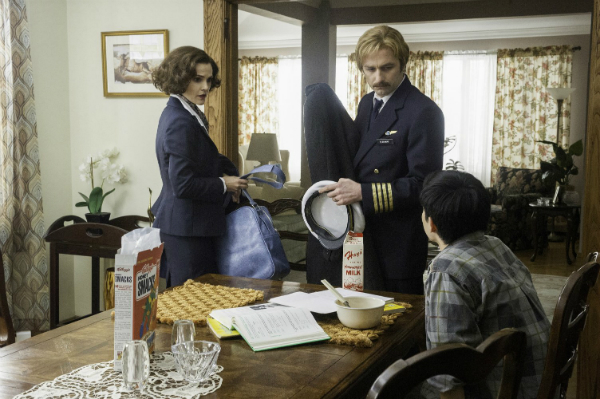 I’m starting to think my belief that last week’s episode was slow was more about me being tired than the show being different, because how could The Americans ever be slow? It’s intense and tense and dense, but never slow. This week’s episode, Immersion, threw out what felt like some major hints about things to come– and also Henry was there! (Kind of.)

The episode opens with Philip (Matthew Rhys) driving home from his last meeting with Gabriel, his face reflecting the shock of Gabriel’s pronouncement that they should keep Paige out of all of this. He finds Elizabeth (Keri Russell) reading in bed when he comes in, and they have one of their talks that makes you wonder when and if they’ve ever felt free to say everything they were thinking about anything ever. He’s glad Gabriel is leaving, but Elizabeth will miss him. Their exchange about his reasons for departing gives them an opportunity to touch on the fact that Gabriel wanted them to go home and that the job wears you down after a while. Then Philip shares that Gabriel thinks they should keep Paige out of it, and Elizabeth seems to find that hard to believe– although she confesses that she wishes they lived in a world where nobody needed to do their jobs.

Now that Gabriel is gone, Claudia (Margo Martindale) seems to be back, and the Jennings aren’t stoked. (Remember when Elizabeth tortured Claudia??) They agree that they’ll take orders from her, but it’s clear they don’t want to socialize the way they did with Gabriel. She asks them to keep after the Kansans until the Center can confirm they have what they need in the super wheat, and they agree… but then they also agree with each other privately that they’re going to cancel their next weekends in Kansas until they know more.

When Elizabeth calls Benjamin (Brett Tucker) to cancel, it seems clear that she’s offering opportunities for him to acknowledge that she isn’t the only woman he’s seeing. She tells him she won’t be back for a few weeks, and he’s disappointed.

When Philip tells Deirdre (Clea Lewis) the same thing, she breaks it off with him, saying he isn’t “assertive” enough for her. Elizabeth is concerned about how he could get dumped by a woman like that and suggests it’s got something to do with what he’s learning in EST– which she characterizes as “everyone’s feelings matter more than anything.” (This is nicely timed on the heels of her doing Tai chi, which she’s picked up from Benjamin.) She believes he’s being too nice because he doesn’t want to hurt anyone again. He reminds her that neither of them really wanted this assignment this time, and she says she’s sure he can get her back if he needs to– which he does, with almost no effort.

He calls Deirdre and gets her answering machine, so he leaves her a rambling message about his interest in her that culminates in saying he’s married. She picks up the phone, interest clear in her voice, and they’re back on. These Jenningses are excellent at seduction.

On the Paige (Holly Taylor) front, Elizabeth and Paige are still training in self-defense in the garage whenever they can, but it hasn’t alleviated Paige’s fear yet. In an intensely intimate moment, Elizabeth confides to Paige that she was raped when she was 18, and that she was afraid for a long time after that. Her training and fighting paid off, though, and she isn’t afraid anymore. (Remember when they were talking about the effects of trauma a couple episodes ago? That’s what I kept thinking about while the veins under Elizabeth’s eyes strained against her skin while she shared this with Paige.)

Later, Elizabeth asks Paige to go for a walk, where they continue the conversation and Paige asks how Elizabeth can have gotten over something so terrible. Elizabeth says that more important things have overshadowed it, like her work and her children. Paige asks if she likes her work, and Elizabeth says she’s proud of helping her country– but says again that she wishes nobody needed to do her job. Paige asks what she would do otherwise, and Elizabeth looks startled– like it’s the first time she’s ever been asked that. She claims not to have given it much thought, but the speed with which she’s then able to produce the alternate career choice of “doctor” belies that. Paige laughs, telling her mom that she has terrible bedside manner, and Elizabeth has to agree. She says she’d like to be a doctor someplace they really needed her skills– like a third world country– so that her poor bedside manner wouldn’t matter as much.

Their growing intimacy is exciting. In addition to this conversation hinting at a possible life after spying for Elizabeth– or at least the dream of one– their shared laughter and continuing exploration of Elizabeth’s past and ideas indicate a growing trust between them.

Elsewhere, the “Eckerts” are back to work monitoring the Morozovs, and Elizabeth learns that Evgheniya (Irina Dvorovenko) is happy in her teaching job and is planning an immersion dinner for her students at one of their houses. She says that all of the students will practice speaking Russian while having a potluck of Russian dishes. The Jennings are delighted, as this seems like it’ll be shooting fish in a barrel- they’ll follow Evgheniya to the party and photograph every student who comes and goes. 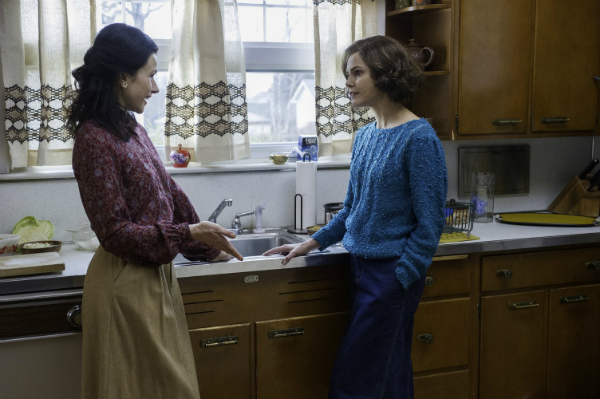 Except, wuh-woah! Evgheniya is a liar! There is no immersion dinner! She is having an affair with one of her students! And he’s a man on a track to advancement, too– maybe soon to be head of the Moscow bureau. This means that the be-wigged Jennings don’t get photos of every student while staking out Evgheniya’s evening, but they do have evidence of her affair and a new plan to try to get her back to Russia in the hopes that she’ll continue the affair there.

They sit down with Tuan (Ivan Mok) to loop him in on what they are going after, and he devises a plan in which he would befriend the bullies who are making Pasha’s life hell at high school in the hopes that Pasha’s misery would impel Evgheniya to move back to Russia. Tuan also tells them that they need to spend more time in this life because their absence from it hasn’t been noticed yet, but he believes it will be.

Taking a “kill two birds” approach to Henry (Keidrich Sellati) and Stan (Noah Emmerich), Henry and his friends (who exist!) are playing some video games while Philip, Elizabeth and Stan visit around the kitchen island one afternoon. Their conversations with Stan are so awkward that it’s hard to believe he doesn’t know their friendship is fake, but poor Stan’s radar for the verity of relationships in his personal life is consistently terrible. In addition to acknowledging Henry’s existence and the likelihood of his having a crush on the female friend in the group (Henry has so many dimensions!), they briefly touch on Paige and Matthew’s split before getting Stan to share that things are still going well with Renee (who is DEFINITELY a spy) and that she wants him to go skydiving with her.

Stan’s other big moment is walking around a museum with Agent Aderholt (Brandon J. Dirden) so their rookie informant, Sofia (Darya Ekamasova), can meet up with them and begin learning how to be inconspicuous while passing information. They’re like: “Don’t be nervous! Here are a bunch of things to remember if you don’t want to be outed as a spy. Also, look natural! Let’s blend in.” And she’s like: “But I am nervous. Also, sooooo excited to be a spy now! Can you take me to the dentist?” And the three of them walk around a public place looking every bit as conspicuous as they’re trying not to, just because two large men are looming over a nervous woman. Oy.

Meanwhile, in Russia: Oleg (Costa Ronin) comes home to find three KGB agents in his lobby. They politely request his permission to search his home, or, more specifically, his room. (I know– thank God he already burned the CIA maps and tape he used to have hidden under his globe!) Oleg’s parents are sharing a quiet, domestic moment when Oleg and the agents come in, and the three spooks toss his room quickly and systematically. They won’t disclose why they’re there or what they’re looking for, and it’s true that Oleg has an awful job that involves making enemies of corrupt people in the government, but I’m 99% sure that this is a direct result of Stan telling Renee that he asked for something at work and it happened– which would make Renee a Russian spy instead of an embed from another U.S. agency looking for an opportunity to trip Stan up.

Oleg’s dad (Boris Lee Krutonog) is LIVID about the intrusion and jumps up to call for answers as soon as the KGB agents leave, but Oleg convinces him not to because he “doesn’t want them to get in trouble” because a Minister has called about them. Oleg’s mother (Snezhana Chernova) is distraught, worried that if they’ve searched, they will “find” something whether or not it was there. Oleg assures her that that isn’t how things are anymore.

The next morning, Oleg visits his boss (Oleg Shtefanko) to ask if he knows anything about the search. The boss seems to know that there’s interest in Oleg, but he doesn’t know why and doesn’t think any of Oleg’s known activities would warrant an apartment search. Oleg confides in him that he went to the records archive to research why his mother was in a camp for five years, and that he didn’t have proper authorization to do that. The boss asks why she’d been in the camp, and Oleg grimly reveals that it was “sabotage.” The boss laughs this off, though, and explains that back then, sabotage could be as simple as taking a pencil home from work, which explains why Mrs. Burova would be so worried about the KGB searching her home.