My next several hours were spent learning how to play tak. Even if I had not been nearly mad with idleness, I would have enjoyed it. Tak is the best sort of game: simple in its rules, complex in its strategy. Bredon beat me handily in all five games we played, but I’m probably to say that he never beat me the same way twice.

With those words we are introduced to the game of Tak in the novel The Wise Man’s Fear by Patrick Rothfuss.  Now the game is jumping out of the pages into reality thanks to the collaboration between James Ernest of Cheapass Games, and Patrick Rothfuss.  For those that aren’t familiar, The Wise Man’s Fear is the second book in The Kingkiller Chronicle, the first book being The Name of the Wind.  The series follows the protagonist, Kvothe, as he retells the story of his life.

Tak is a simple and elegant game, it is, as Rothfuss puts it, chess made for him.  It’s an abstract strategy game for two players, think along the lines of the aforementioned Chess or the game Go.  Two people sit across from each other over a checkered board, the goal is to build a road from one edge of the board to the other.  Simple, right?  Well the other player, of course, can block and capture to prevent you from completing your objective. 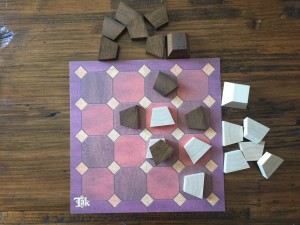 Currently in beta, the rules are still being refined.  Considering this is a game that originated within a book, and is described with few specifics,  it’s no surprise development and fine tuning is ongoing.  The broad strokes of the rules are set, but every so often something presents itself and needs a tweak.  To this end, the most up to date rules can be found on Cheapass Games, along with pdf files to print out your own board.  If you have suggestions, need clarification, or find a “bug” there is also an email address you can use to contact James Ernest.

How did this collaboration come to be, you may wonder.  During a recent ECCC panel, Rothfuss stated he has been aware of James and Cheapass Games since he was in college.  If you are unfamiliar with the game company, look them up, they have a fantastic library of games that are fun to play and won’t break your bank.  Which is the exact reason Rothfuss was aware of the company, in fact, Cheapass Games was the first game company he knew by name.  So when James approached Patrick about putting out a Name of the Wind version of the pub game Pairs, Patrick jumped at the chance.  Patrick enjoyed the game so much, he has alluded to putting Pairs in his books saying that he knows who and where it will be played.

After that endeavor proved successful, James brought up the idea of bringing Tak into the real world. However, it would prove to be a bit of on uphill climb.  At the same ECCC panel, Rothfuss discussed the process of developing Tak for the book, where he attempted to create the game so he could go into specifics while writing.  It didn’t go quite as planned and we ended up with few details about the game in Wise Man’s Fear.  As a result, Patrick was then convinced there would be no way to bring Tak into the real world and no market for such a game.  But James was persistent and Patrick was proven wrong after his first play test with James.

The fact that very little details exist in the book made it easier to design, James worked out the mechanics, Patrick made sure it stayed true to the game he describes in his world and that lives in his imagination.  During the process of bringing the game to life, James and Patrick have developed a rich history of the game.  Everything from where Tak originates, how it evolved through the ages, and the different variations that exist in the current timeline of Kvothe.  However, some of these details we may never know unless they make it into The Kingkiller Chronicle.  The rules on the website are described as the modern version, with some references to rule variants from antiquity. 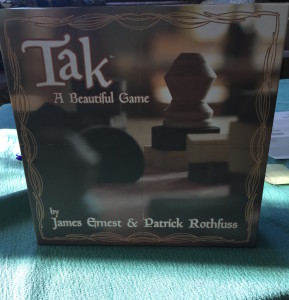 The game board is divided into squares, again, think Chess or Go.  The board can be any size from 3×3 to 8×8 or larger, but the game is most commonly played 5×5 or 6×6. The 3×3 game is trivially simple, and the 4×4 game is typically reserved for children and new players.  The 7×7 game is rarely played, but the 8×8 game is sometimes considered the Master’s Game.  Kvothe would play on the 8×8 board or higher as he has no problems keep track of many things in his head.

The different variations, as of this writing, are:
The Beginner’s Game
The Traveler’s or Tavern Game
The Court Game
The Master’s Game

Patrick made the comment, “It’s about playing against your opponent’s best game.” To that effect, allowing another player to take back moves and reset the board can be part of gameplay and is encouraged.  It’s also considered polite to show your opponent where your next winning move may be to ensure they do not miss something on the board.  Of course, you can also play cutthroat where you attempt to be sneaky and capitalize on mistakes to steal the win.  Both play styles are allowed, Patrick plays the polite “Courtly Game”, James plays the “Traveler’s or Tavern Game”.

So, how do you get your very own shiny copy of Tak?  Simple, the Kickstarter will launch on April 19th.  As of this writing, there is no word on what exactly will be available in the Kickstarter but it will be a full, complete, physical version of the game.  The long goal is to make different version, maybe metal, stone, coins, etc but that all depends on how well the Kickstarter does.  If this proves to be a viable concept and there is indeed a market for it, Patrick and James have not ruled out the possibility of creating special versions.  Of course, these special and probably limited versions of the game may only be available to benefit Patrick’s charity, Worldbuilders.

Tak reflects the subtle turning of the world. It is a mirror we hold to life. No one wins a dance, boy. The point of dancing is the motion that a body makes. A well-played game of tak reveals the moving of a mind. There is a beauty to these things for those with eyes to see it.