Sweet Christmas! The Luke Cage trailer just hit and it is glorious!

If you’re reading that last sentence unsure what I’m talking about, let us catch you up.

The next big Marvel show out from Netflix will be Luke Cage, starring Mike Colter in the titular role as the ex-con who escapes prison after a medical experiment gives him super strength and bulletproof skin. The entire series lands online September 30th for all your binge-watching needs.

And today, we have our first real trailer! So what did we see in it? Here are our top five reactions, thoughts and observations!

But first, watch the trailer for yourself. 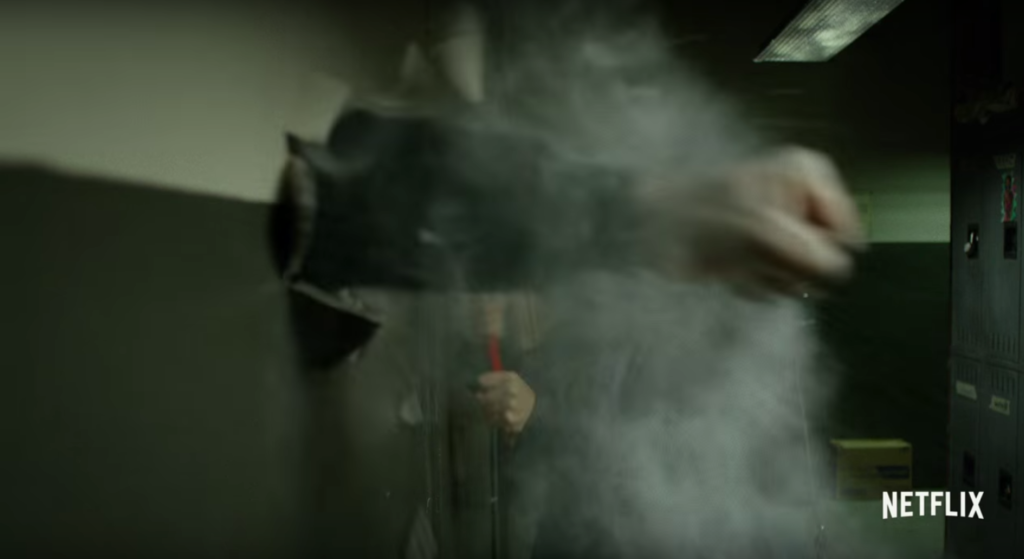 One of the biggest traits with the Luke Cage comics is that his character is mostly concerned with his neighborhood. Certainly, he has saved the world more than his fair share of times, but his overarching concern is always for the people living on the streets close to where he lives. It started off as a way for him to make money as a “hero for hire,” but then became more of a charitable mission.

We absolutely see that concern burning bright here as he sets off to start a war with the crime lord, Cornell Cottonmouth Stokes, played by Mahershala Ali. Of course, it starts off with Cage wanting to lay low and not be caught, to stay safe and be “left alone,” but the crime is too bad and he’s gotta do something. But it seems that things kick off after his barbershop is shot up. This is most likely what pushes him into the light to take his city back. 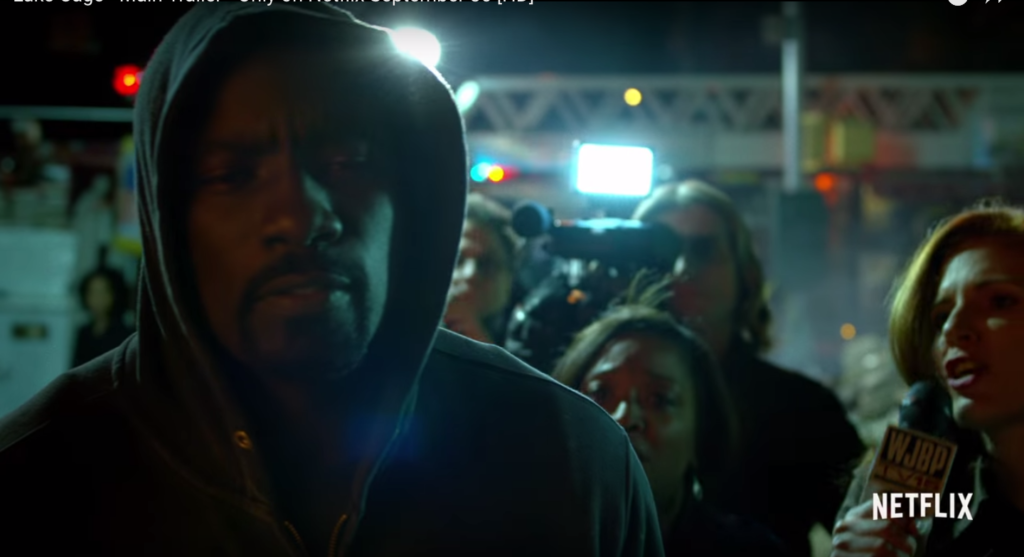 What starts off as a mission to protect the weak becomes a crusade to clean the streets from a gangster unafraid of blood and happy to stay on his throne. 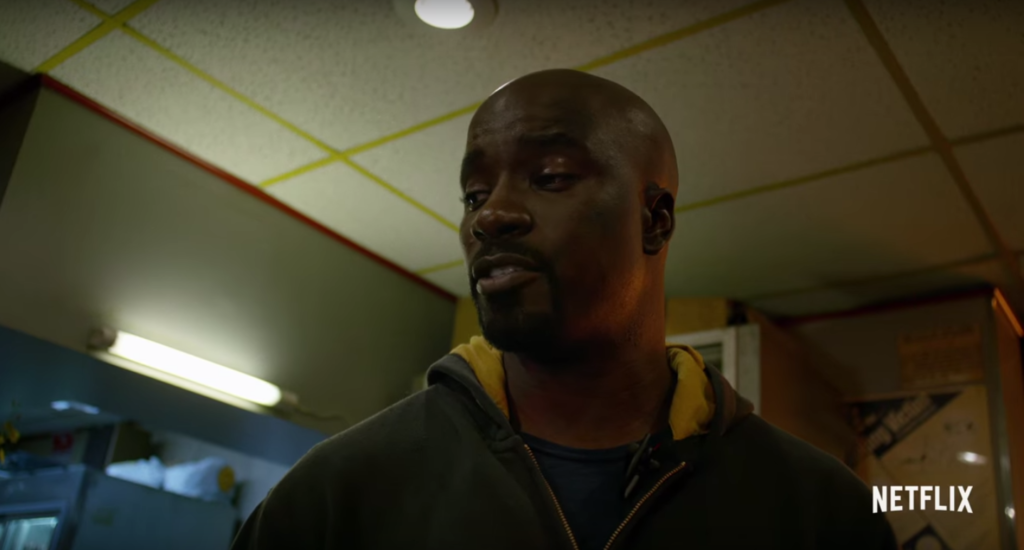 But Stokes doesn’t account for a hero that is not so much a man as he is a force to be reckoned with. As we see in the scene with the Asian couple, Luke Cage is unstoppable, standing tall and unmoving, the shield and enforcer the city needs. But his crusade is more than stopping the crime — it’s also reinvigorating his neighborhood, bringing it back to life, and he does this by assuring the couple that he’s watching out for them. They don’t have to cower in fear.

In other words — you’re safe, you can live your life — and that’s exactly what his city needs.

“Everybody wants to be the king.” 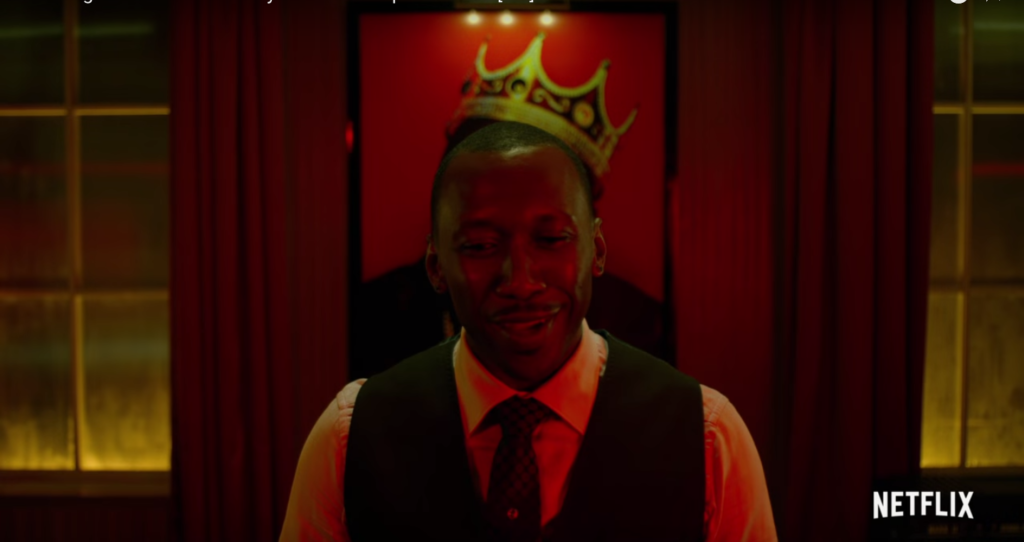 To have a strong hero, you need an even stronger villain and it looks like we’ve got this in Cornell “Cottonmouth” Stokes. In the comics, Cottonmouth Stokes was just a high level thug and drug lord who was great with knives and poisons, but here it seems that he’s taking the role of Willis Stryker, a.k.a. Diamondback, Luke Cage’s friend from childhood. The two of them worked in a small gang together until Cage saw how it was hurting his family and he changed his ways. However, when Stryker’s girlfriend, Reva Connors, left him for Cage, Stryker framed Cage for Heroin possession and he ended up in prison. 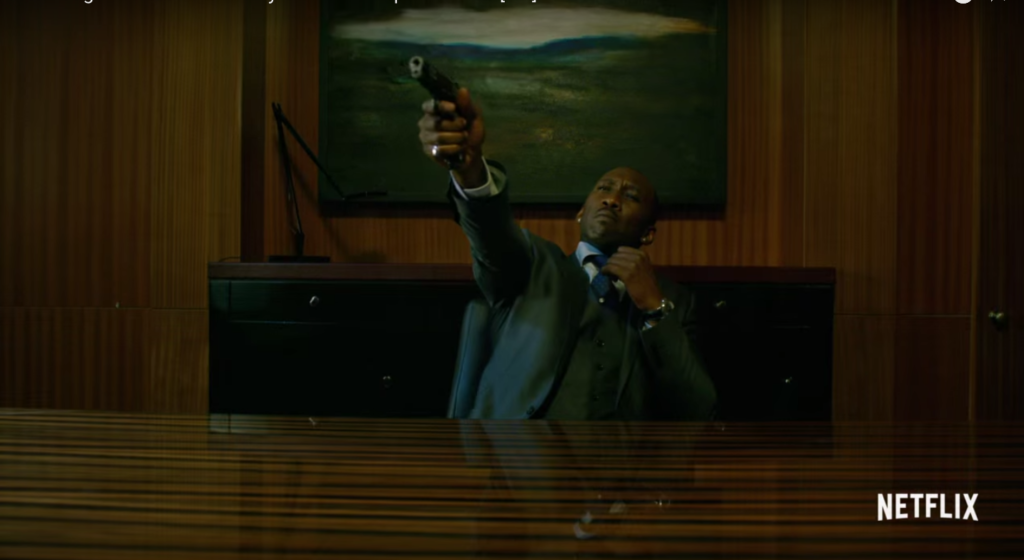 While it’s unclear how much of that origin the Netflix series will utilize, or if they will even use any of it, what we see in Cottonmouth is a ruthless killer who seems to take much joy in murder. At the very least, we see a ruthless criminal who has no qualms killing anyone to stay the king of Harlem. We believe him when he says, “You wanna go to war? I’ll give you a war.” 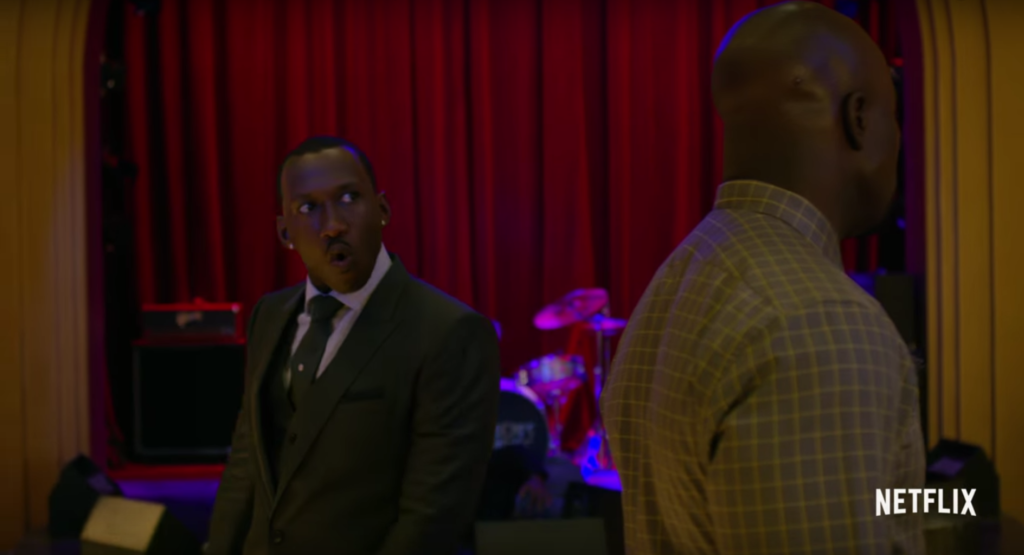 In the comics, Dr. Noah Burstein is a doctor at the prison where Luke Cage has been unfairly imprisoned, framed for a murder he didn’t commit. The experiment was sabotaged by the prison guards who hated Cage. After the explosion, while everyone is unconscious and confused, Luke Cage uses his newfound strength to bust himself out of prison. Meanwhile, the officials all assume that Cage died in the explosion.

Whether they will duplicate the details of this origin story exactly or not, what we do know is that the series will deal, in part, with Cage’s origin story and his status as an escaped convict trying to lay low. And now we know, with certainty, that the MCU version of the character gets his powers from an experiment gone wrong. 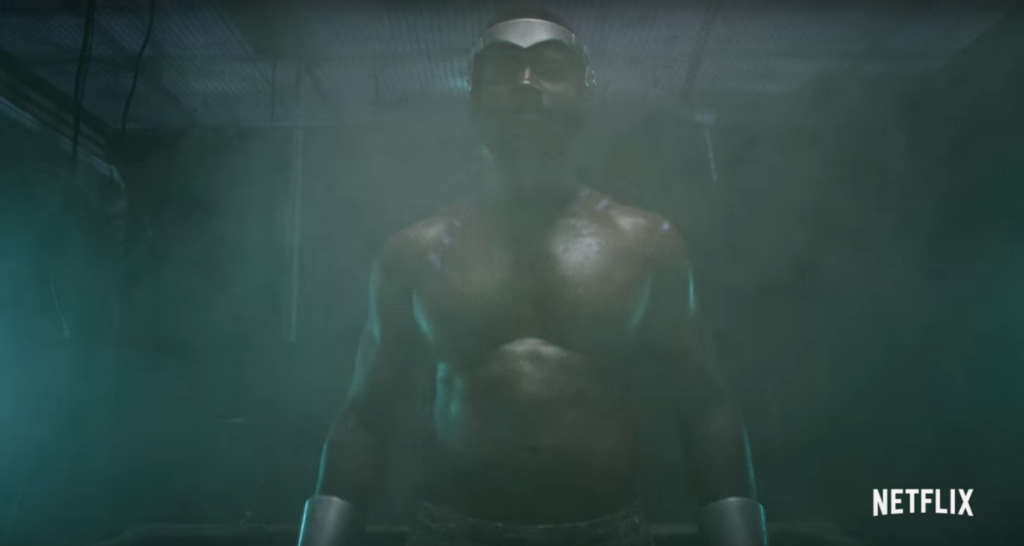 Also, very sincere props to Cheo Hodari Coker, the show runner, for giving us this wondrous little Easter Egg of Luke Cage first getting out of the experiment and wearing something that looks like a tiara and his metallic wrist bands. It’s a very subtle nod to his original costume as Power Man and it’s glorious.

Rosario Dawson is renewing her role as Claire Temple, the nurse that originally helped out Matt Murdock (Charlie Cox) in the first season of Daredevil, then helped out Luke Cage when Jessica Jones (Krysten Ritter) brought him to her in Jessica Jones. Remember that scene where Temple couldn’t help Luke Cage out because of his unbreakable skin? 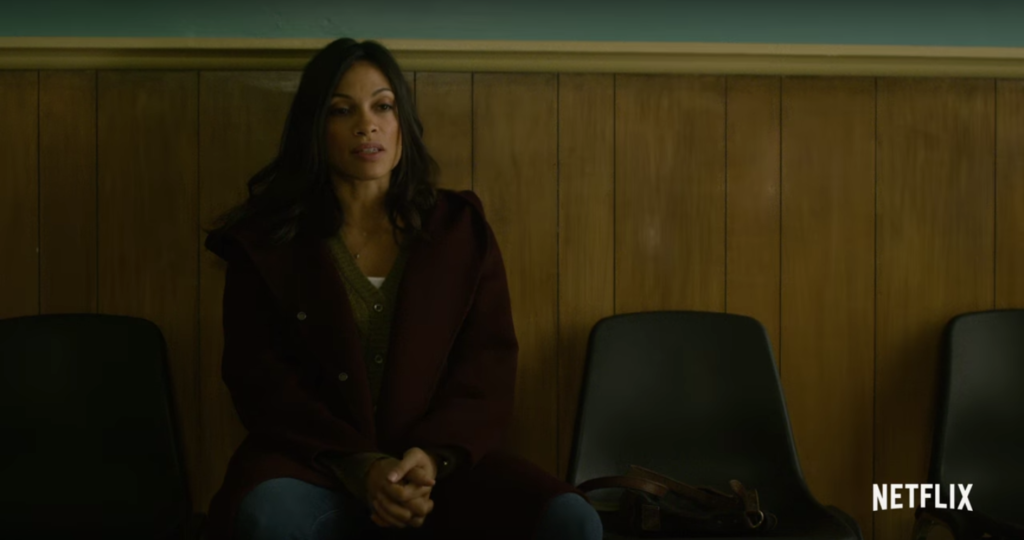 In the comics, Claire Temple was one of Luke Cage’s first true love interests after he lost the love of his life, Reva Connors, though it’s unclear from this trailer if that romance blossoms. What we do see here is a Nurse Temple who has absolutely transformed from who she was when we first met her in Daredevil. That is, when she first fell in with Matt Murdock, the thought of a masked vigilante going out at night to seek justice was a terrible idea that would get you killed, but Temple has now seen way too much. Her position has changed and she now knows, as she tells Cage, “Sometimes if you want justice, you have to get it yourself.”

We barely saw any of her, but what we did see was perfectly Misty Knight (Simone Missick). First of all, we see her standing up to Luke Cage when she says, “You might be bulletproof. But Harlem ain’t.” 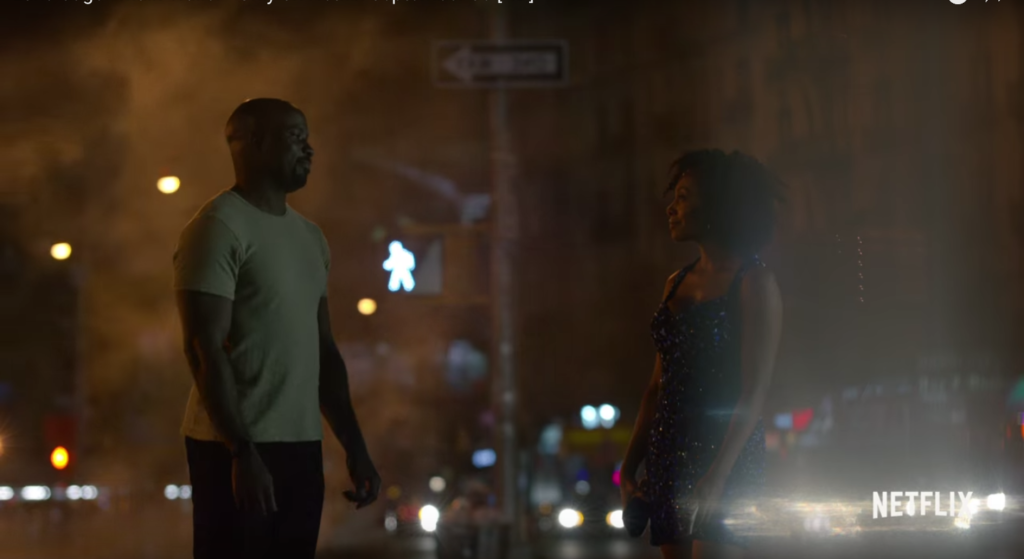 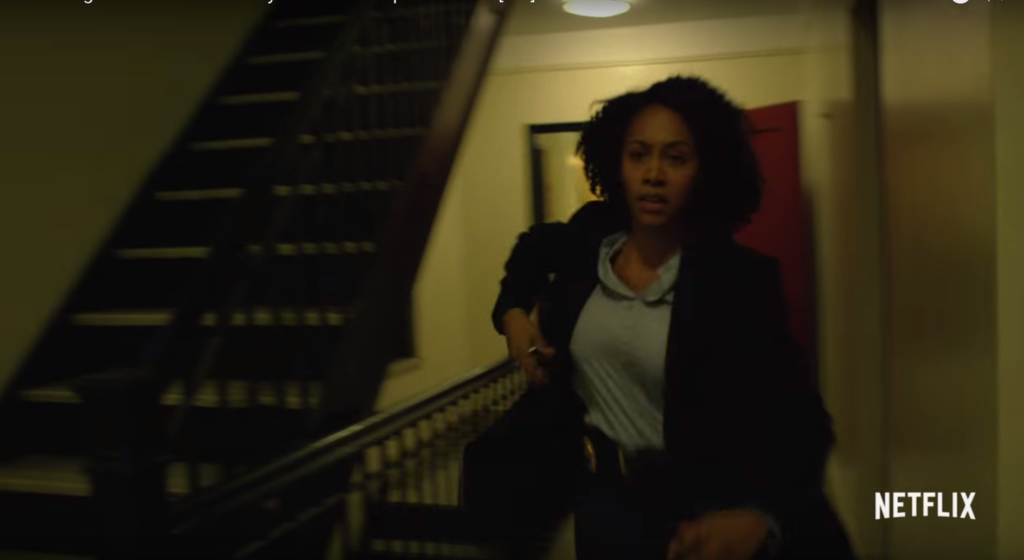 So we can see that she’s not intimidated by him and, in fact, is more than capable of holding her own. We also see in this one exchange that she’s familiar with who he is and what he can do and she’s on his side, despite her being a cop. This immediately lets us in to see that she’s an ally.