SUPERNATURAL Rewatch: (S02E01) In My Time of Dying 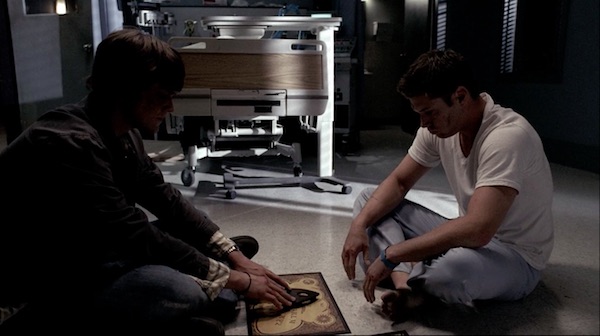 Season two of Supernatural opens right where season one wrapped. The Impala sits smoking on the side of the road. As the possessed truck driver rips the car’s door from its’ hinges, Sam (Jared Padalecki) opens his eyes and weakly draws the Colt. However, the demon immediately vacates its’ host, leaving the distraught truck driver to see what he has done.

There’s a flash as the Winchester’s are loaded into a waiting medical helicopter. However, the shot quickly cuts to the hospital as Dean (Jensen Ackles) sits up in bed. Disoriented, he wanders through the deserted halls. Dean quickly approaches a nurse; however, she won’t even look at him. Something is definitely wrong. Turning a corner, Dean enters a room. He looks down at the figure in bed. He sees himself. Dean is unconscious, intubated, and this is an out-of-body experience.

Later, Sam sits with John (Jeffrey Dean Morgan), who is finally conscious. Dean is in bad shape with head trauma and internal bleeding. However, it seems John’s only concern is the Colt. He quickly instructs his son how to handle the situation, with Dean seemingly the furthest thing from his mind.

While Sam works with Bobby (Jim Beaver) over the destroyed Impala, John sits with his unconscious son. As Dean watches his distant father, his anger with the situation growing. He has done everything John ever asked. How can John simply let him die? This moment is a powerful one, made exceptionally poignant by Jensen Ackles’ emotional performance. 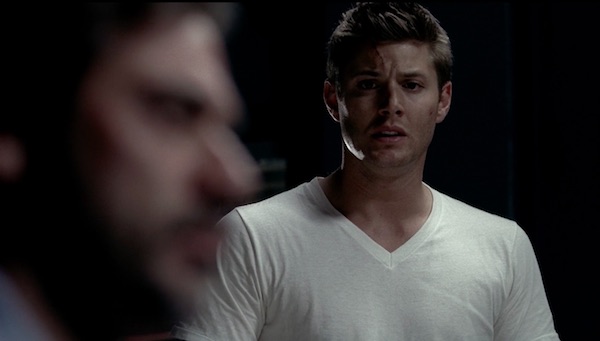 While Sam and John teeter on the edge of their already rickety relationship, Dean is seemingly trapped. Furthermore, a shadowy spirit wanders through the hospital, taking people seemingly at will.

Dean looks up as he hears a woman screaming in the hallway. He’s no longer alone. Tessa (Lindsey McKeon) came into the hospital for an appendectomy, and there were apparent complications. No one else can hear or see them. The two have no choice but to work together.

Meanwhile, Sam quickly learns that Dean is still close by. Stumped for a better solution, he buys a Ouija board. Dean rolls his eyes, but sits across from his brother. While the boy’s finally talk with the aid of the board, they realize that the shadowy spirit terrorizing the hospital is a Reaper. To make matters worse, if the creature is present naturally, there’s nothing they can do. “You can’t kill death…”.

Later, while Sam examines John’s journal, Dean cracks the case. In fact, Reapers can alter human perception. Dean sprints into the hallway. Tessa is the reaper.

Meanwhile, John sits in the basement of the hospital, bent over an intricate chalk drawing. He looks up as a man approaches. It turns out, John planned to conjure Yellow Eyes, and it worked like a charm.

Meanwhile, Dean and Tessa talk. The moment is an important character building one for Dean, who insists his family needs him. He’s the only one who can protect them. Tessa’s voice is sad as she continues. She can’t make Dean come with her, but he won’t be getting back in his body. However, the scene pauses as black smoke streams in through the vent and overtakes Tessa. With a smirk, she turns back to face Dean. Her eyes are yellow, “It’s you lucky day…”.

Back in Dean’s room, Sam spins around as his brother wakes from his coma. Once Dean is recovered, the two boys talk. Is seems that Dean can’t remember anything from his experience. However, he can’t shake the feeling that there’s something wrong. They look up as John enters. 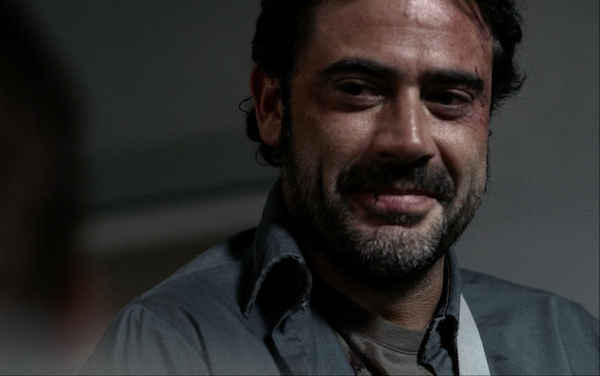 Sam leaves to get a drink as an emotional John sits with Dean. For the first time, John opens up to his son. He made Dean grow up too fast. His eldest son took care of everyone without complaining. John barely holds back his tears as he says, “Take care of Sammy”. There is an emotional beat between the two men, before John exits.

Moments later, Sam comes down the hallway and looks into a room. John lays sprawled on the floor, unconscious.

Sam and Dean watch in horror as the medical staff work over John to no avail. As the screen fades to black, the Doctor gives a time of death.

Supernatural airs Thursday nights on your local CW affiliate. Previous seasons are available on DVD as well as on Netflix.