Supernatural opens inside a therapist’s office. A young man (Richard de Klerk) sits on the couch. He talks quietly with his doctor (Bill Mondy). As he speaks, he describes his “abilities”. He recounts the time he “fried up the neighbors cat like a hamburger”. When the  older man isn’t convinced, the boy reaches out to demonstrate. However, the therapist doesn’t budge. The boy sits back and continues. The Yellow Eyed man is telling him to do terrible things…

Later, the boy walks through the streets. He goes to open his car door, but quickly catches sight of a figure behind him. As he turns around, he’s stabbed.

Related: Check out earlier installments of our Supernatural rewatch, here. 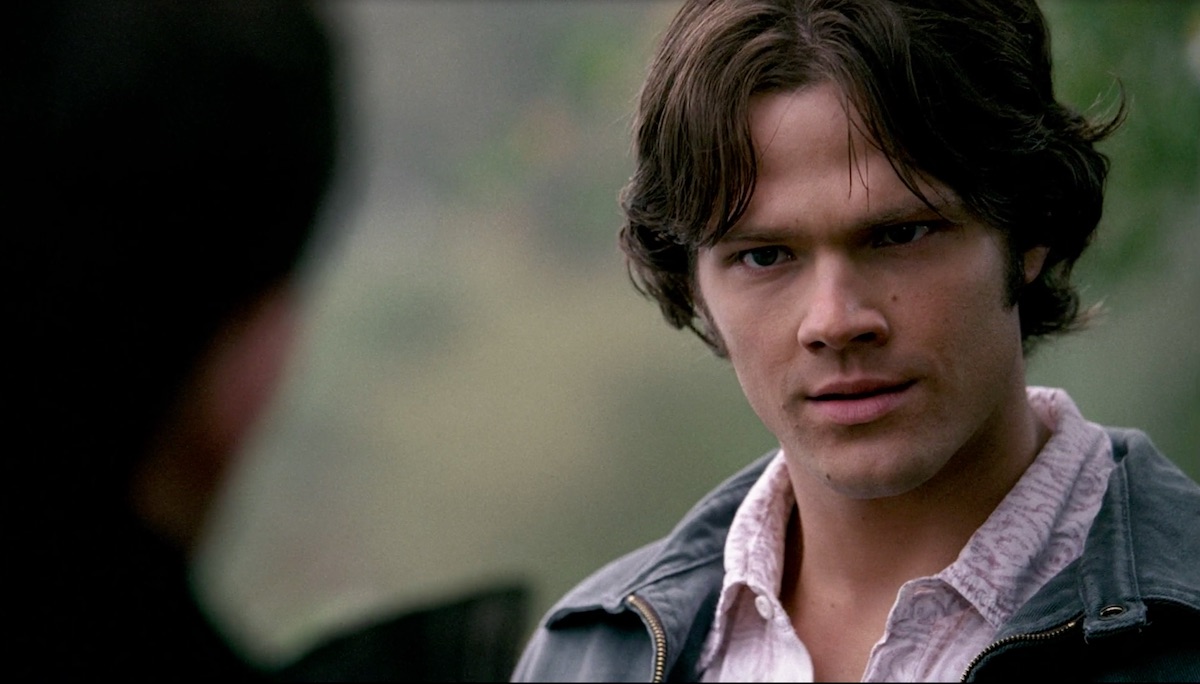 Meanwhile, Sam (Jared Padalecki) and Dean (Jensen Ackles) stand on the riverbank. Dean attempts to tell Sam their father’s (Jeffrey Dean Morgan) last words. “He said that I had to save you… If I couldn’t, I’d have to kill you. He said I’d have to kill you, Sammy.”. Of course, this isn’t enough for Sam, who quickly looses his cool. Both brothers struggle to contol their surging emotions. Trying to think of their next step, Dean is desperate to lay low for a bit. However, Sam has other ideas.

Later, Sam sneaks out. He moves through a building, clearly looking for something. There’s a pause as he triggers a tripwire. An explosion tears through the room, violently throwing Sam off his feet.

However, it’s just a dream. A woman (Katharine Isabelle) wakes up and looks around in a cold sweat. This is Ava. She stares up at the ceiling. It’s another nightmare. 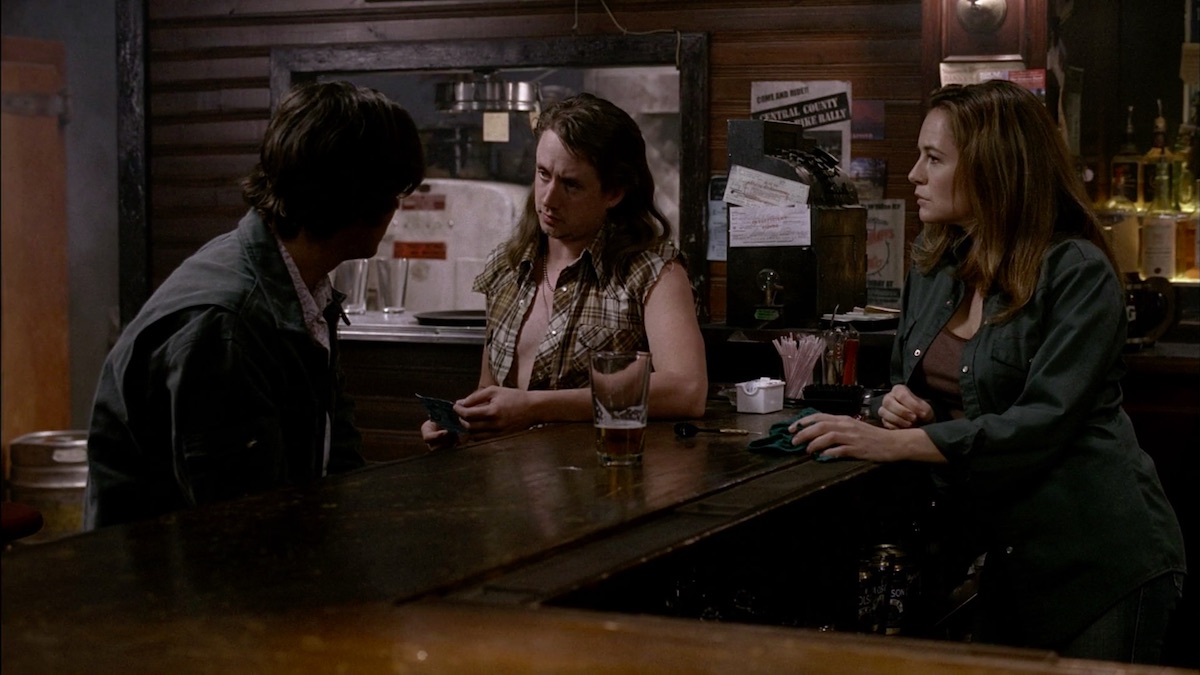 Meanwhile, Sam arrives to see Ellen (Samantha Ferris). While there, he learns Jo recently ran off to start a new career as a hunter. Together, Sam and Ellen huddle with Ash (Chad Linberg). Sam needs to find more kids like him. While they work, Ash finds one he didn’t know about: Scott Carey. However, digging deeper, they discover his current residence is a cemetery. It’s the boy from the first scene.

Feeling like he’s on to something, Sam leaves to visit Scott’s family. His haunted father (Tom McBeath) describes Scott’s recent troubles, which aren’t unlike Sam’s.

Later, Sam enters his hotel room. He starts as Ava pops up behind him. It seems Sam is in danger. While they talk, Sam learns that she too is like him. She describes her premonitions and the headaches she experiences. “For some reason, my dreams are coming true…”. She shakily describes her dream involving Sam. They soon agree to work together.

Later, Ava sits across from Scott’s therapist, her nerves apparent in her face. At the same time, Sam hovers out the window. With the therapist adequately distracted, Sam is able to steal Scott’s patient files. 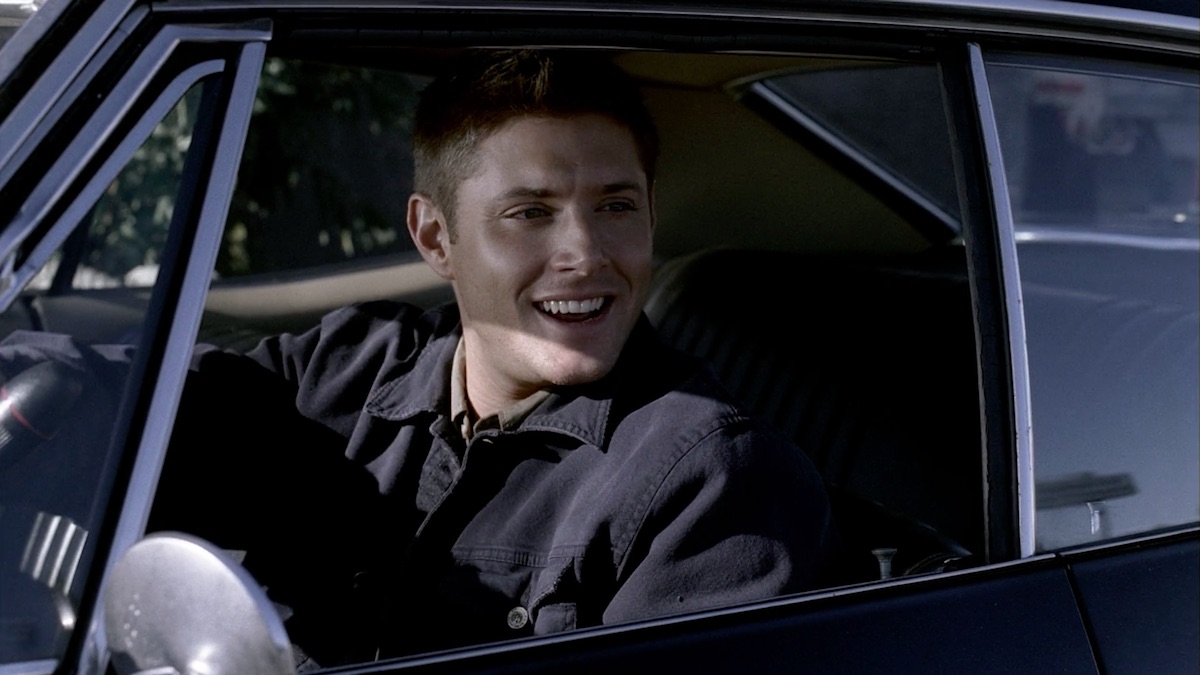 Back at the hotel, Sam and Ava listen to Scott’s tape recorded therapy sessions. On the tapes, the boy describes Yellow Eye’s masters plan. He describes an oncoming war, and all the others like him will be the soldiers. However, the moment is interrupted as Sam’s hotel window explodes.

Outside, Gordon (Sterling K. Brown) sits with an intimidating rifle trained on Sam’s window. However, before he can take another shot, Dean materializes behind him. The elder Winchester kicks the gun out of his hands before the scene cuts to black.

While Sam and Ava investigate the shooting, Sam’s phone rings. Picking it up, Dean is on the other end. The two share a brief exchange, as Dean sits tied to a chair. Gordon holds a gun on him. Luckily, the brothers have a code word which consequently tells Sam just what he’s walking in to. 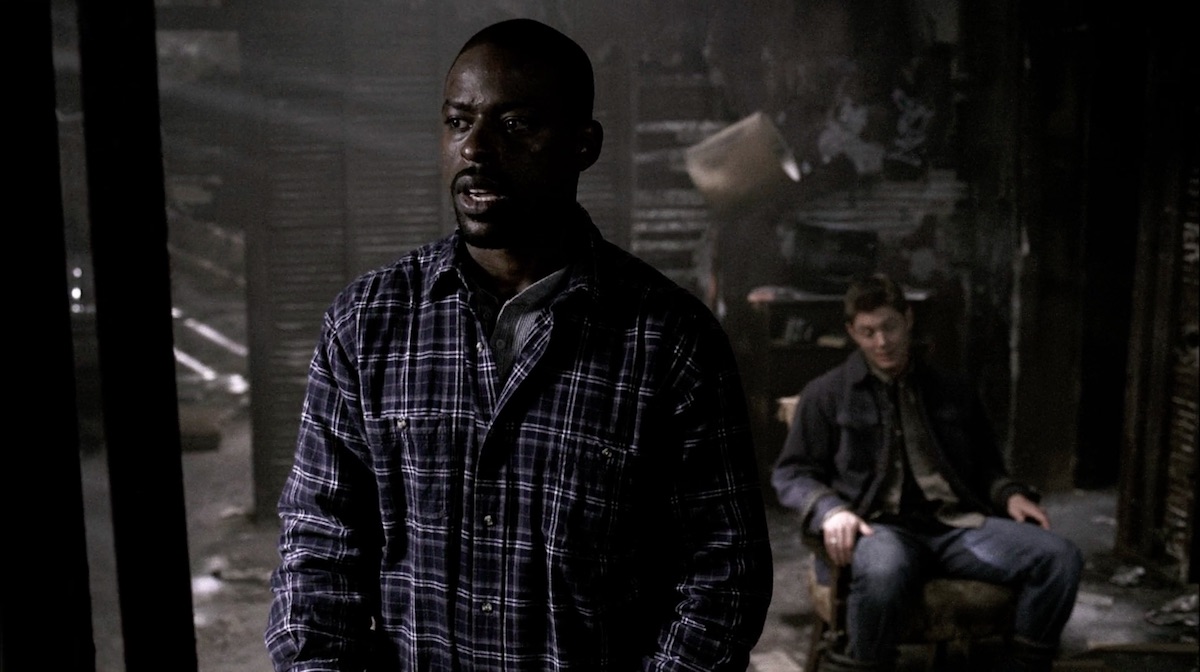 Later, Dean and Gordon talk as they wait for Sam’s inevitable arrival. In Gordon’s eyes, Sam is now fair game. Gordon is not only aware of the oncoming war, but also of Sam’s abilities. To make matters worse, Gordon has been hunting the each of the kids like Sam. In fact, it was Gordon who killed Scott in the opening scene. As the conversation continues, he shows Dean a tripwire. Sam is walking straight into Ava’s vision…

Gordon waits anxiously with a gagged Dean while Sam breaks his way into the building. Dean screams as an explosion shakes the building. Gordon looks down with a smirk, “Sorry Dean”. Walking into the next room, Gordon scans the scene quickly. He stops as a gun is pressed to the back of his head . “Put it down, now!”. Sam stands behind him, alive and completely healthy. A fight breaks out between Sam and Gordon as Dean struggles to free himself. 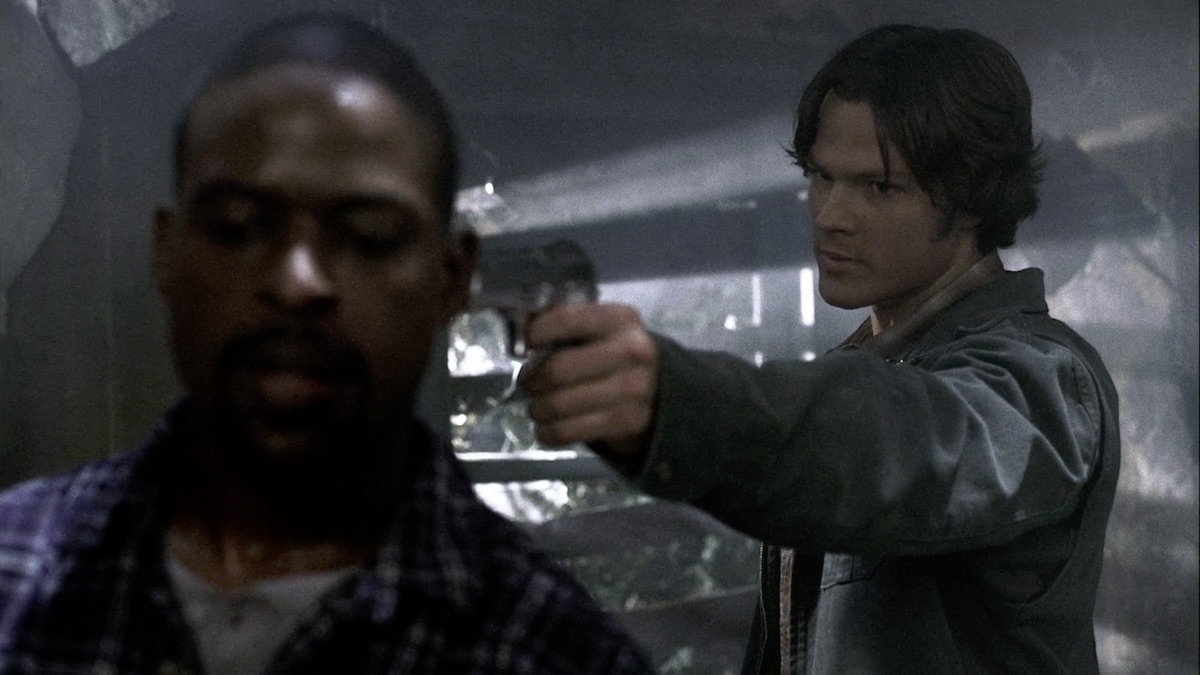 Sam quickly gains leverage on Gordon, but once again the Winchester’s are unable to kill him. Rather, Sam knocks him out with the butt of his rifle.

After freeing Dean, they make a hasty escape. However, Sam and Dean are barely outside before a fully rejuvenated Gordon emerges, guns blazing. The Winchester’s take cover behind a ridge, and watch as police cars swarm Gordon. With a smile, Sam mentions that he called in an anonymous tip…

As the episode comes to a close, Sam and Dean leave town. While they talk, it seems Dean still wants to lay low. They need to figure things out. Sam sighs, “You can’t protect me, Dean”. Dean looks to his brother, “I can try”. However, Sam wants to continue the hunt. If Dean is going protect him, he must stick around. Furthermore, there’s one more thing they need to do. 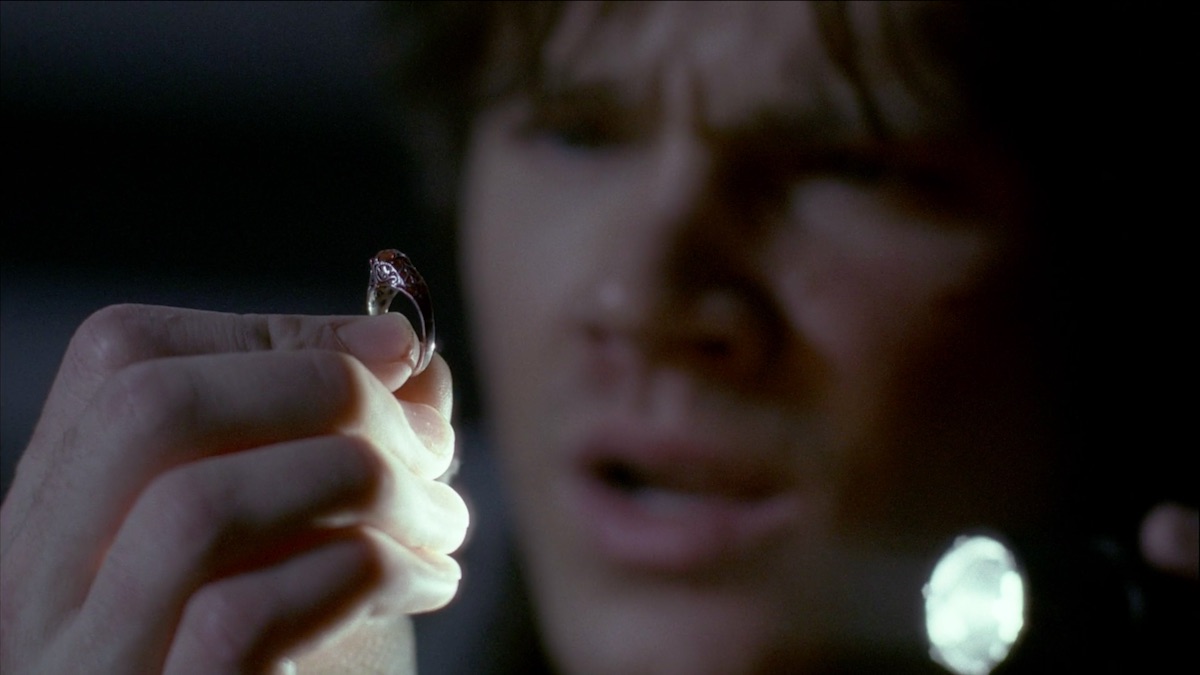 However, Ava doesn’t answer Sam’s calls as he tries to check on her. Worried, they drive to her house. Entering the bedroom, they stumble on a bloody crime scene. Ava’s fiancee lies in bed, stabbed multiple times. Suflur residue lines the window. Sam bends down and picks up Ava’s engagement ring from the floor…