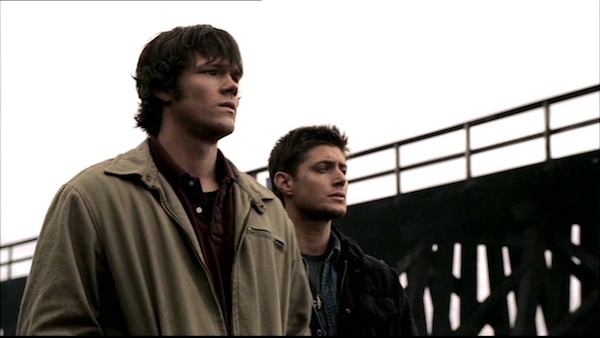 Supernatural opens in Blue Earth Minnesota. A Priest (Richard Sali) turns the pages of his bible. However, the serenity of the moment is shattered by the arrival of an emotional Meg (Nicki Aycox). Sitting in one of the pews, she confesses everything to the Priest. As he looks down at her, it suddenly dawns on him that she is a demon. As he runs, Meg gives chase. She catches up to him in the basement of the church, but when he’s unable to help her find John Winchester (Jeffrey Dean Morgan), Meg slits his throat.

Meanwhile, the Winchester’s are still in Colorado. As they huddle in their hotel room, John reveals that the demon who killed his wife is actually responsible for a number of attacks in the years after. In fact, each incident coincides with the 6 month birthday of the family’s baby. Yet, despite all the information John has gathered, he continues to be a step behind the demon.  However, the signs are aligning once again, and this time point towards Salvation Iowa. Can the Winchester’s finally catch the demon before it strikes again?

Arriving in Salvation, not only are the Wincehster’s running out of time, but there are a number of hospitals in the area. There could be dozens of children matching their very general description. However, Sam (Jared Padalecki) is struck with a crippling headache as he leaves one of the hospitals. It is a vision. The scene is identical to the night his mother died. A woman (Erin Karpluk) stands in a bedroom, cuddling a small baby. Overcome with the pulsating migraine, he gropes in his pocket for a map in hopes of triangulating a location.

Luckily, as Sam sprints through the streets, he practically crashes into the woman from his vision. It turns out, the young family completely fits the pattern. The Winchester’s must act now.

Later, the men regroup in their hotel room. In the moment, Dean (Jensen Ackles) and John are carbon copies of each other. And like his son, John can’t understand the sudden appearance of Sam’s powers. As the men talk, Sam’s phone cuts them off. Picking it up, Meg is on the other end of the line. She asks to talk to John. While the two talk, it turns out she has kidnapped his friend Caleb (Josh Blacker). She pauses long enough for John to hear Caleb die, before she makes her final demand. She wants the Colt.

Faced with their lack of options, John’s composed veneer cracks. He just wants this all to be over. He wants his wife back. However, the Winchester’s work out a plan. John decides to give Meg an antique store copy of the Colt. This will hopefully give Sam and Dean enough time to kill the demon.

Later, Sam and Dean wait anxiously for the demon to show itself. A general unease hangs over the scene.

At the same time, John finally faces off with Meg. The demon holds all the power, and she knows it. She seems skeptical as John hands over the fake, but as she hands the gun to another demon, her companion shoots her. However, Meg doesn’t die, exposing John’s plan as a fake. John quickly makes his escape, using a hose of Holy Water to distract the demons.

Back in Salvation, the house’s lights start to flicker. Luckily, Sam and Dean are still waiting outside. “It’s coming,” Sam says as they jump out of the Impala.

Entering the house, the brothers are ambushed by the young husband (David Lovgren). Upstairs, things head south as the demon stands the over the baby. As Sam enters, he quickly fires the Colt, scaring off the entity. He just saves the mother’s life. Dean grabs the baby just as the crib bursts into flame, and they make a hasty exit.

While Sam and Dean have saved everyone, they still couldn’t kill the demon. Its’ menacing reflection is visible through the smoke as the family stares up at the now burning house.

As the episode comes to a close, Dean talks an emotional Sam down from a ledge. While the demon killed Jess and killed their mother, Dean emphasizes that he’s not loosing his little brother too. “(You’re) all I have”, Dean says as emotion brims in his eyes. Suddenly they remember, John is still missing. As they call John’s phone, Meg picks it up…

Previous seasons of Supernatural are available on Netflix. New episodes air on your local CW affiliates every Thursday night.

Darkly Comic Horror Series THE BABY Is Born at HBO