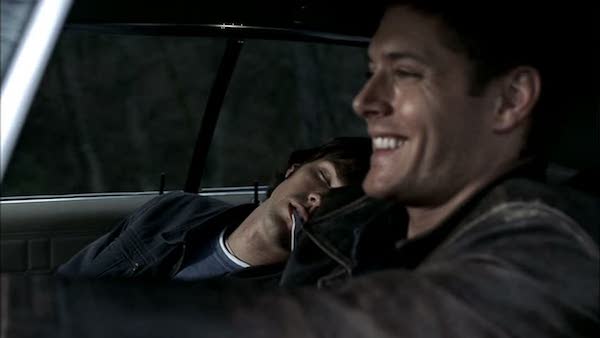 Previously on Supernatural: Sam and Dean tangled with a shadow demon terrorizing the people of Chicago.

As the episode opens, a group of teens stumble on a run-down cabin deep in the woods. As they make their way inside, the reactions range from “I’m not going in there!” to “You wusses!”. Walking through, one of the boys recounts a story about the history of the cabin. Someone strings up women in the root cellar… according to his cousin, at least.

The teens gather in the root cellar. Looking up, they notice the body of a woman hanging from the ceiling. They run from the room in terror.

Later, Sam (Jared Padalecki) and Dean (Jensen Ackles) cruise down the interstate. As they drive, Sam recounts the story we’ve just seen. In fact, by the time the police returned to the cabin, the body had vanished.

The Winchester’s pull up in front of a local take-out place where they chat with the local teenagers. While they talk, it becomes increasingly clear that these kids are scared. Each one tells a different version of the story, but the basic structure seems to match-up.

Once things conclude, Sam and Dean move towards a local record store. While they flip through records, they talk with one of the employees. He recounts a story he heard from his cousin. A man and his six daughters lived in the house in the 1930s. One day, the farmer went crazy and strung up his six daughters before finally hanging himself.

The next morning, Sam and Dean drive over to the cabin. Surprisingly, they are unable to use their EMF meters due to a number of overhead power lines. Pocketing the devices, the brothers look around. Satanic sigils cover the walls. Sam mentions that the place must have been a long-time hang-out for local kids.

While they cross through the rooms, Sam and Dean enter the kitchen and come face to face with a group of video camera wielding kids (Travis Wester and A.J. Buckley). They are “professional paranormal investigators”. Long time fans of Supernatural will recognize the “Ghost Facers”. This is their first appearance. Sam and Dean smirk as they question the obviously amateur ghost hunters. Not surprisingly, the kids have no idea what they’re doing.

The next day, Dean meets Sam at the library. The kid’s stories are not checking out when considering history. The names and facts surrounding the house don’t match up with the local legends. While a farmer did live in the house during the 1930s, he only had two children, and both were boys.

Meanwhile, another group of kids nervously approach the house. One of the girls walks through the basement alone. Suddenly, the spirit materializes in front of her, and before she can react, he wraps a noose around her neck and pulls her into the rafters.

Re-entering the house, Sam and Dean nervously creep through the basement. When it seems once again like there’s no spirit activity, the ghost suddenly takes an ax swing at them. What happened to his rope? While a shotgun blast brings them a momentary reprieve, the spirit quickly reappears and Sam and Dean are forced to flee.

Later that night, the brothers return to the hotel, completely stumped by this case. While Sam stares at the internet, Dean repeatedly sketches one of the symbols from the wall. He knows it… from somewhere. Sam suddenly looks up from his computer. There was a new post added to a local paranormal website which actually changed the whole story. It claims that the farmer was in fact a Satanist who murdered his victims with an ax. Now this story matches up with the spirit Sam and Dean saw.

Armed with this information, they return to the record store. As they once again talk with the boy, a little more forcefully this time, he finally opens up to them. In fact, he stumbled upon the cabin all by himself. One day, when his cousin was home from break, they worked together to make the house look haunted. They made the whole thing up. So, what really happened in the house?

Putting some thought behind the story, Sam comes up with a theory. He thinks that the spirit is in fact, a “Culpa”. It’s a Tibetan spirit. As the legend changes. the spirit changes. However, there’s one problem.“How are we supposed to kill an idea?”.

Sam and Dean try a new idea. Each time the story changes on the internet, the spirit apparently changes. Hoping to set themselves up for success, Sam and Dean plant a story on the Ghost Facers paranormal website. It is Sam’s hope that the change in the story will permit them to rid the spirit.

Later that night, Sam and Dean return to the cabin. Unfortunately, not only did their fix not take, but the paranormal investigators are also there. It turns out, the story didn’t post because their servers crashed right after they uploaded it.

Sam manages to get the other kids out, and his distraction gives Dean just enough of an opportunity to try a different plan. He douses the house in gasoline and they just make it out as Dean lights a match. It’s a quick and dirty solution, but it’s the best they have.

As the story comes to a close, they meet up with the Ghost Facers. The boys are leaving town. It turns out they had a call from a big time Hollywood producer, and the story to Hell House is being optioned.

As Sam and Dean walk away, Sam smirks. In fact, he was the producer who called them.