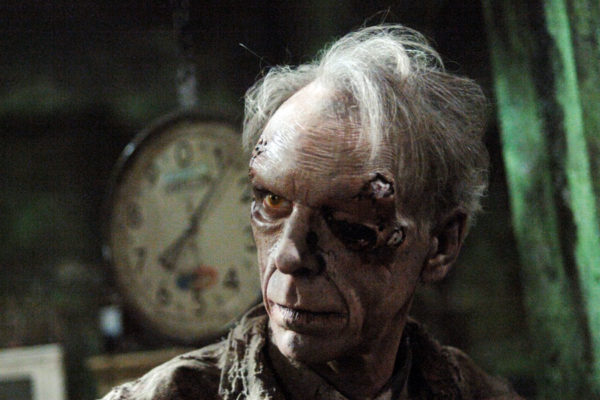 Previously on Supernatural: The Brothers found themselves back at the Kansas house where everything started. The young family who moved into the house struggles with a vengeful spirit presence, and only the Winchester’s can help.

“Asylum” opens on Roosevelt Asylum in Illinois. Two police officers arrive at the abandoned asylum. As the two men reluctantly enter the old hospital, they reflect on the roots of the local legend. Not only is the terrifying building haunted by the spirits of patients long since dead, but it is said that those who spend a night in the asylum go mad. It’s with this thought hanging in their heads that the officers are forced to split up, searching for a group of kids who broke into the hospital. As the officers get in their cars, having successfully found the kids, something isn’t right. Officer Walter Kelly (Peter Benson) wipes a trickle of blood from his nose as they start the car.

Returning home after his shift, Walt and his girlfriend fight. As the camera cuts to outside the house, there’s two gunshots.

Sam (Jared Padalecki) and Dean (Jensen Ackles) sit in a rundown hotel room. Despite seeing him in the last episode, John is missing and in the wind. The brothers both have a different take on how to deal with the situation. However, a text message interrupts their argument. Coming from an unknown number, it contains coordinates pointing to Rockford Illinois. It’s so strange, but the brothers agree to go.

Arriving in Rockford, the first place they visit is the bar where they find Walt’s partner, Officer Daniel Gunderson (Tom Pickett). The man’s reluctant to talk, but his story is coaxed out by an effective good cop/bad cop routine. He tells Sam that Walt was a good cop, with a thoroughly average personal life. Nothing pointed any homicidal tendencies. However, he quickly points the boys to the asylum.

The Winchester’s break into Roosevelt themselves, all their research pointing to the south wing of the asylum. According to they’ve read, three students had broken into the hospital one night, and only one survived.

Sam goes to visit Dr. James Ellicott (James Purcell), investigating the history of a name the brothers found on a plaque inside the asylum. While he talks with the Doctor, Sam discovers that the asylum’s most dangerous cases were housed in the south wing. And it was also in the south wing where there was a violent patient riot in 1964. There were a number of deaths in the riot, and in a gory twist, a number of the bodies were never found. Dr. Ellicott also reveals that his father Dr. Sanford Ellicott (Norman Armour) was a chief physician at the hospital, and his experiments were at the center of the riot.

The action returns to the asylum that night, as a young couple has decided to break into the hospital. The scene is quiet and tense as they move through the abandoned halls. As Gavin (Nicholas D’Agosto) enters a dark room, Katherine (Brooke Nevin) surprises him with a passionate kiss. However, the moment doesn’t last long. As he hears the real Kathrine call out to him from the next room, he pulls back. He hasn’t been kissing the right girl. The kiss came from a spirit.

Meanwhile, the Winchester’s quietly enter the asylum, ready for an investigation. As they move through the asylum, there are jump scares a plenty. They stumble upon Katherine, cowering alone in a corner of the asylum. Despite the Winchester’s best attempts, she refuses to leave before finding Gavin.

If horror movies tell you anything, it’s that you shouldn’t separate. And it seems only fitting that once Sam and Dean separate, the asylum wakes up. The uneasy peace is first broken as a spirit grabs Katherine, pulling her into a room, locking her away from the Winchesters. It is Sam who’s able to crack the mystery. He tells Katherine that in order to get free, she has to face the spirit and listen to it. Listening to him, the spirit whispers “137” into her ear.

Dean’s the first one into room 137. While, he methodically through the disheveled room, and finds a scribbled journal in one of the walls.

As Sam attempts to lead Gavin and Katherine to safety, the spirits use everything in their power to keep them inside. They turn around when Sam gets a call from Dean, leading him to the basement.

Sam follows the call, desperate to rescue his brother. however, the spirits faked the phone call. As Sam turns a corner, Dr. Ellicot’s ghost attacks him. He grabs Sam by the head, saying “I’m going to make you all better”.

When Dean meets up with Gavin and Katherine, narrowly avoiding a fired round of rock salt, Dean discovers the ghosts’ trick and goes to the basement. Stepping into the room, he immediately meets up with an angry looking Sam. Dean doesn’t figure out the problem until Sam pulls a gun on his brother. Ellicott’s experiment dulled Sam’s filter, bringing all his repressed anger towards Dean and his Father to the surface. Dr. Ellicott was experimenting with rage. Sam fires a round of rock salt into Dean’s chest, sending him through the wall.

As Dean lays on the ground in pain, Sam stands over him seething. Dean’s able to get the jump on his brother when he hands him a pistol, telling him to just get the shooting over with. When Sam pulls the trigger of the empty gun, Dean sucker punches his brother, knocking him out.

With Sam out for the count, Dean has time to find Ellicott’s body. However, before he can torch the bones, the ghost jumps him, but Dean is scrappy. There’s a tense moment before Ellicot’s body is finally consumed in flame.

As the episode ends, the Brother’s make peace. Sam remembers everything, but claims that he didn’t mean it. As they catch up on much needed sleep, Dean’s cellphone rings. When he doesn’t answer it, Sam grabs the phone, answering it. He sits straight up as he hears the voice on the other line. It’s John.

Supernatural airs on the CW on Thursday night’s at 9/8c. Previous seasons are available on Netflix.

Keep an Eye Out: Gotham viewers might recognize Nicholas D’Agosto. The actor currently appears on the Fox series as Harvey Dent.