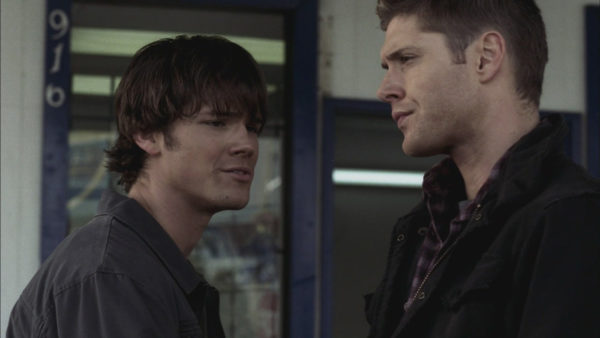 Previously on Supernatural: Sam and Dean faced off against a Native American curse threatening to overwhelm a growing housing development in a suffocating swarm of insects.

Jenny (Kristin Richardson) sits on the floor of her kitchen, going through boxes. Her expression is forlorn as she looks at a happy wedding picture. The tranquility of the moment is shattered by her daughter, Sari (Ginger Broatch). The young girl looks uneasy as she says, “There’s something in my closet”.

Like any good mother, Jenny goes to investigate. There’s never anything in the closet, right? She smiles as she turns back to her daughter, “There’s nothing there”. It doesn’t completely comfort the girl, who asks her mother to put a chair in front of the closet door before she leaves.

As Jenny returns to her unpacking, she hears something in the basement. Going downstairs, she finds a chest, filled with pictures of the Winchester’s. This was their house. All at once, the house seems to stir. Upstairs, Sari watches in terror as the chair moves out from the closet door under it’s own power. She can’t speak as the closet door slowly opens. There’s a terrifying moment of silence before the closet bursts into flame.

Sam (Jared Padalecki) wakes up with a start. These darn, pesky nightmares.

The next morning, Dean (Jensen Ackles) goes through the choices for their next case of the week. There’s a ghost ship, cattle mutilations, and a man who shot himself in the head three times. However, Sam is distracted. He sketches mindlessly on a notepad. Suddenly, he recognizes the drawing. It was a tree from their old house. Sam has an uneasy feeling. The people in their old house are in danger. They need to go back to Kansas.

Sam and Dean are struggling. A puppy eyed Sam admits to Dean that he’d dreamed about Jessica’s death before it happened with scary accuracy. Now he’s dreaming about a woman in danger in their old house. Could the thing that killed Mary (Samantha Smith) and Jessica still be in the house?

However, Dean is dealing with his own personal demons. Ever the stoic big brother, he very rarely lets his guard down. Ackles’ performance is powerful as he turns to Sam, “Just slow down… First you tell me that you’ve got the shining and then you tell me that I’ve got to go back home? Especially when I swore to myself that I’d never go back there”. The director (Ken Girotti) can see the stunning performances from both Ackles and Padalecki in the moment, cutting to tight close-ups of the actors. The scene wallows in emotion as they finally resolve to go back home.

They pull up in front of the old house. Before Dean can launch into their usual spiel, Sam opts for the truth. He admits that they used to live in the house, and asks if they can come in and see the old place. Jenny has just found the photos, so she lets Sam and Dean inside.

The walk through the house, and as they talk the truth starts to emerge. The lights flicker, there is scratching in the basement. Sam and Dean can barely restrain their nervousness as Sari comes downstairs and tells the about the thing that lives in her closet. Despite her mother’s insistence that it was all a nightmare, Sari tells Sam and Dean about her bedroom being on fire. Suddenly they flashback to their mother.

As they leave the house, the Brothers are as vulnerable as they’ve been this season. Sam is fixated on how to get the young family out of the house,  but he also has to talk Dean off the ledge. His older brother is freaked out. Not only are Sam’s dreams coming true, but Dean’s long repressed memories of the night of their mother’s death are coming back. Dean quickly leaves, and in a moment of uncharacteristic vulnerability, tries to call John. He can barely repress his emotion as he leaves a message for his father, admitting doesn’t know what to do, and he needs help.

Things are getting worse at the old Winchester place. Trying to fix their clogging sink, Jenny calls in a plumber. However, there’s a terrifying moment as the plumber reaches into the garbage disposal as it turns itself on.

While the brothers move through the town, they collect what information they can from the locals. Sam and Dean get an accurate insight into John in the days after Mary’s death. It is a picture of a man with two young son’s struggling with shock and grief. Furthermore, the locals describe the change in John’s personality as he becomes increasingly interested in the paranormal, and looses himself in the quest to avenge his wife’s death.

Sam and Dean visit a local palm reader, Missouri Moseley (Loretta Devine) who John Winchester (Jeffrey Dean Morgan) had reportedly visited after Mary’s death. As they talk with the woman, she definitely has supernatural powers. While she has barely looked at Sam and Dean, she’s able to recount everything. She had been out to visit the house, and tells them that the spirit living there is definitely evil.

The Winchester’s bring Missouri to the house. However, they are barely able to get inside. Jenny’s panicking. Her son had just been locked in the refrigerator by a malevolent spirit. As Missouri walks the rooms, including Sam’s old nursery, she reveals that the house is a magnet for paranormal energy. She tells them it isn’t the same energy that killed Mary, but one of the spirits was a particularly nasty poltergeist.

They decide to purify the house. As they go through the rooms, these poltergeists are not going to go down without a fight. The spirits use all the powers of the house (including knives, dressers and power cords) to protect themselves. As Dean finally finishes, things have seemingly ended, the house cleansed.

As the family sleeps soundly, Sam and Dean sit outside, unconvinced. Suddenly, as Jenny runs to the window screaming, Sam realizes his dream is coming true. They burst into the house as a fiery entity emerges from the closet. Sam rescues the kids, telling the oldest daughter “Take your brother outside as fast as you can…”, before he’s sucked further into the house by an unseen entity.

As Sam’s pinned to the wall, the fiery demon coming closer to him, Dean rushes in to save him. He raises his rifle, but Sam stops him. He can see who it is. At once, the spirt takes it’s real form. It’s Mary Winchester.  She dissolves into flame, taking on the evil spirit.

As the episode ends, the situation has cleared. The house is once again peaceful. Jenny gives Sam and Dean the pictures, reminding them why they do what they do. Finally getting into the Impala, Sam’s uneasy. What is happening to him? Furthermore, why is all of this happening?

Missouri walks back into the house, and there’s an unforeseen moment. John is in the house, watching his son’s from afar.