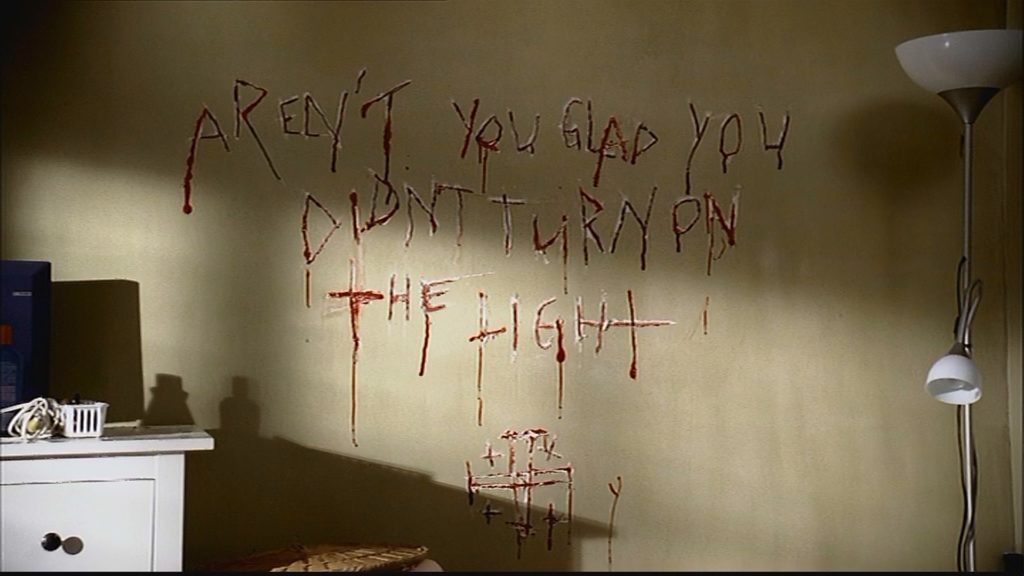 Previously on Supernatural: Sam (Jared Padalecki) and Dean (Jensen Ackles) take on a violent shape shifter. They escape, but not quite unscathed, as the creature takes Dean’s form, making him a wanted man with the police.

The episode opens in an Iowa sorority house. Lori Sorenson (Jane McGregor) dresses for a date with the help of her  roommate Taylor (Christie Laing). A “good girl,” Lori wears a prim, buttoned down shirt, but asks Taylor if it is too “Martha Stewart”. It doesn’t take much convincing for her roommate to give Lori a more risqué, lacy shirt.

Her boyfriend Rich (Brian Skala) takes Lori to a local make-out spot, hoping to get some personal time before moving onto a party. As Rich steps outside to investigate a strange noise, a mysterious hook wielding man violently kills him.

Sam and Dean arrive in Iowa soon after, and they easily lie their way into Rich’s fraternity house. This gives them not only free room and board, but an easy avenue to investigate the murder. The Winchester’s tell the fraternity boys that they are fellow frat brothers recently in from Ohio, looking for a place to crash. As they help one of the boy’s apply body paint for the big game, he tells them about Lori, giving them a fresh angle for questioning.

“Every urban legend has a source,” Sam points out as they discuss the murder’s similarity to the famous Hook Man legend. The brothers spend a lot of time in the library, much like they did just two episodes earlier in “Bloody Mary”.

Not only is Lori the only child of a local Reverend (Dan Butler), but the two are on their own. Lori’s mother died years before. As her father brings Lori back to the sorority house, he lectures his college age daughter on the dangers of living the wild life.

Lori wakes up the next morning and discovers her roommate laying in a pool of her own blood. As Lori screams, she looks up at the wall. The murder has scrawled, “Aren’t You Glad You Didn’t Turn on the Light” in the victim’s blood.

Sam and Dean drive past the sorority house, and sees the hubbub from Taylor’s murder. The police question Lori, who is a person of interest for the multiple murders. With the police distracted, Sam and Dean sneak into the house and investigate the very bloody crime scene. Looking at the message, Sam (ever the scholar) recognizes an elaborate symbol which has also been carved into the wall as something directly connected to the story of Jacob Carnes. The local man with a hook for a hand was buried in local unmarked grave, and is an excellent candidate to be their hook man.

They split up. While Sam visits the Sorenson house, Dean stops at the cemetery, intent on salting and burning Carnes’ remains.

As Sam stakes out the house, Lori joins him, having seen him through the bedroom window. She needs to talk to someone who isn’t her father. As she talks with Sam, the two are eerily similar. Lori tells him that she’s cursed, and he shouldn’t get too close to her. Everyone around her seems to die. Sam, who’s internalized the guilt from his mother’s death, also still reels from Jessica’s death. He completely identifies with her. Lori has also just fought with her father, who is having an affair with a married woman. Lori tells Sam, “If you do something wrong, you should be punished.”.

As the Reverend calls his daughter inside, the Hook Man attacks him. As he’s done for last two episodes, Sam springs into action. He unloads a shotgun full of rock salt into the spirit and it disappears. However, there’s one problem. Dean had already salted and burned Carnes remains. Something isn’t right.

The Brothers go to the church, with the intention of burning Carnes’ hook. However, Sam meets up with Lori, who’s tearfully praying. As the two talk, their moment is once again shattered by the arrival of the Hook Man. The episode enters it’s climax, setting the brother’s against the high powered spirit. Dean arrives with his shot gun. With that distraction, the Sam learns that Lori has been wearing the needed clue around her neck the whole episode. Lori’s necklace had been crafted out of Carnes’ hook. As they burn the silver necklace, the spirit of the Hook Man burns up. Sam and Dean emerge victorious, once again.

Supernatural airs Thursday nights at 9/8c. Seasons 1-11 are available on DVD, as well as stream on Netflix.