The Winchesters have suffered a huge loss on Supernatural.  Sam and Dean are handling their grief differently.  And they are at odds about Lucifer’s son, Jack.  Sam believes Jack can be good. Dean wants to kill him.  Either way, Jack is learning who he is and what he can do.

What the boys don’t know is that Lucifer is trying to get back to their universe with Mary. He wants to trade Mary for Jack. Lucifer’s cronies want Jack too. And so do the angels.

And it appears that the Winchester’s loss is not so great.

In “The Big Empty”, the mystery begins when a man in Wisconsin is killed.  A neighbor swears she saw the man’s dead wife leaving the home.  Sam (Jared Padalecki), Dean (Jensen Ackles), and Jack (Alexander Calvert) go to investigate.  The case seems pretty simple. The dead wife’s ghost came back to haunt the man and killed him.  That’s an easy solution. Dig up the dead wife and burn her body.

Dean sent Jack to get him food and Sam doesn’t like it. Dean says Jack is always staring at him. Sam explains that Jack really wants Dean to like him.

Sam finds a grief journal in the woman’s car. He says the first man also had a grief journal and was seeing the same psychiatrist, Mia Vallens (Rukiya Bernard). The guys decide to visit Mia.  Her assistant turns them away, but Dean is insistent that they see her immediately.  Mia comes to them and feels that they lost someone.  Jack speaks first and says he lost his mother.  Sam explains that they are all brothers.  Their mother recently passed…it’s not a complete lie. 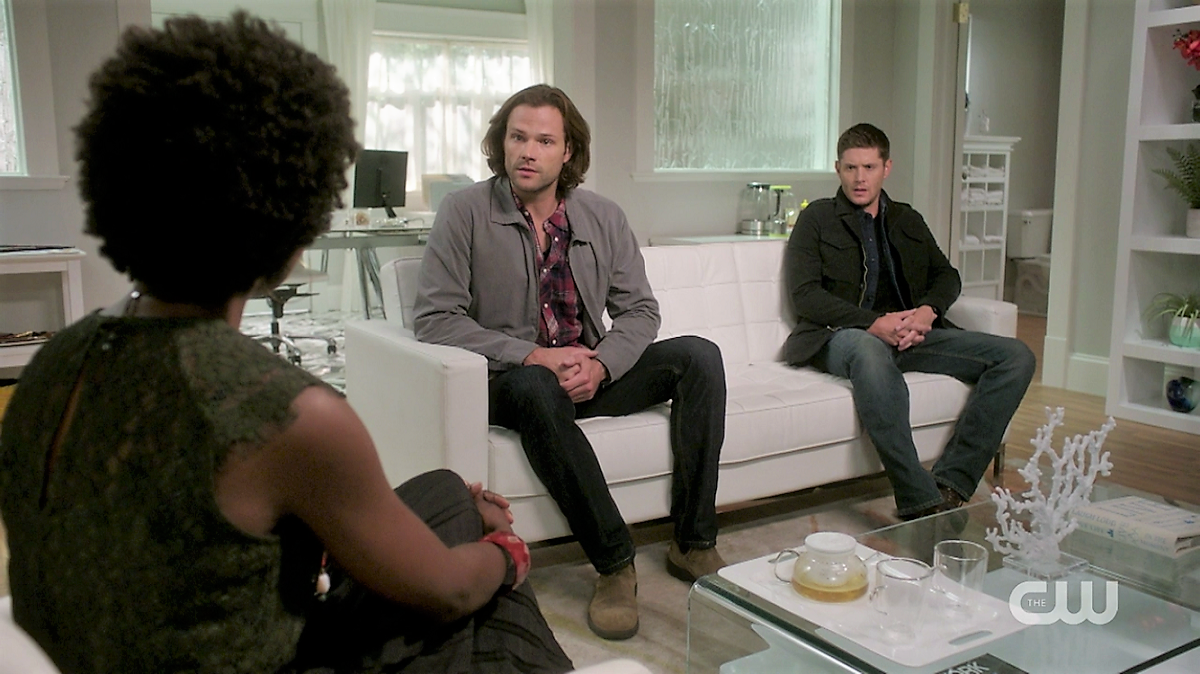 Mia takes them to her office. Mia can tell Dean is not really into the session.  Sam tells her that Dean isn’t processing their mother’s death well.  Dean says Sam is having a hard time accepting her death. That sets Sam off. He yells at Dean, expressing his resentment that Dean knew her better.  Sam gets up to leave.

While taking a break, Sam sees a sign telling visitors to not go upstairs. So what does he do? He goes upstairs.  He finds bloody handprints on the stair rails leading to a bathroom. Once in the bathroom, Sam finds a bloody mess in the bathtub.

Downstairs, Mia observes Dean and Jack. She says that Jack is terrified of Dean.  Dean tries to convince her that he and Jack are great.  She tells him that he’s directing his anger at everyone else.  Sam bust in the room saying that the doctor is a shape-shifter. Mia tries to stop them. She says she is, but hasn’t killed anyone. She helps her patients by shifting into the people they have lost so they can say goodbye. Dean tells her that two of her patients are dead.  They were killed by people who look like their deceased loved ones.  Mia insists that she is telling the truth.

Mia says her ex boyfriend Buddy (Niall Matter) is probably the killer. He is a shifter like her, but he likes to hurt people.  He’s targeting her patients, so if he is a shifter, he could be someone who has access to her records.  Mia names her assistant as a possibility.  Dean and Jack go to investigate.

Castiel (Misha Collins) woke up last week in a dark place alone…or so he thought.  Some kind of dark watery being emerges. Castiel can feel someone watching him. The strange being transforms into Castiel, saying he’s a cosmic entity.  Castiel B, tells Castiel A that he’s in nothing…a big empty.  It’s the place that existed before God and Amara created the universe. It’s also the place where angels and demons go when they die. 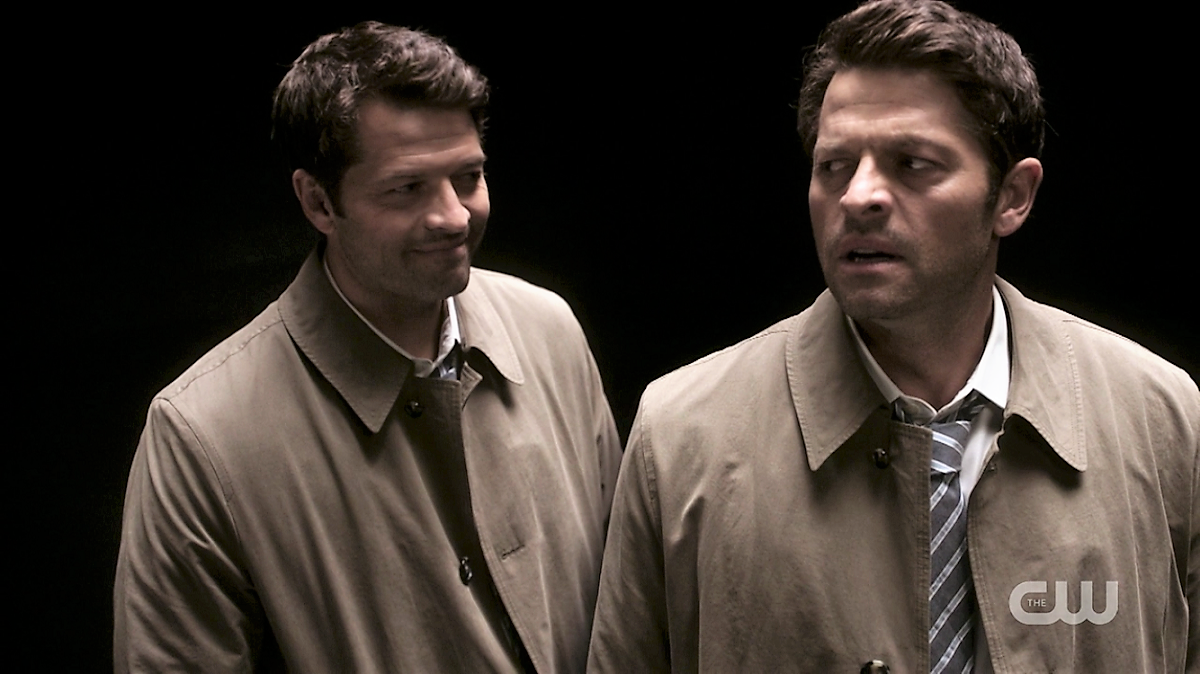 Misha Collins as the Empty Being and as Castiel on Supernatural, cwtv.com

The angels and demons are supposed to sleep, but Castiel is awake.  And when he woke up, Castiel B woke up.  And Cas B doesn’t like being awake.  Cas A says the Winchesters must have made a deal. Cas B says he’s the only one with pull in the nothing, and no one made a deal with him.  He gets really agitated and put his hand on Cas A’s head trying to extract as much information as possible.

Dean and Jack find that Mia’s assistant is in fact human.  Sam checks her security cameras to see if anyone’s eyes are glowing. They find a man, John Driscoll.  He actually passed the Winchesters on their way into the doctor’s office.

Cas B is very annoyed Cas A. Cas A tells the being to send him back to Earth.  The cosmic being tells Cas that he doesn’t want to go back.  He knows everything about Castiel.  There’s nothing on earth for him.  He belongs in the empty.  The being shows Cas all of the hurt he experienced on Earth.

RELATED: 7 Characters We Need in the SUPERNATURAL Alternate Universe

Cas B hits Cas A trying to make him go back to sleep. He tells him to save himself.  Cas says he’s already saved.  No matter what the being does, Cas will stay awake. He tells the being he will fight him for eternity or he can release him.

Dean and Jack return and Sam is gone. Mia tells them that Sam figured out who the killer is and went after him.  Dean is alarmed. Sam did not call him to say he was leaving. Sam always calls!  Dean tries to get a hold of Sam while Jack asks to talk to Mia. 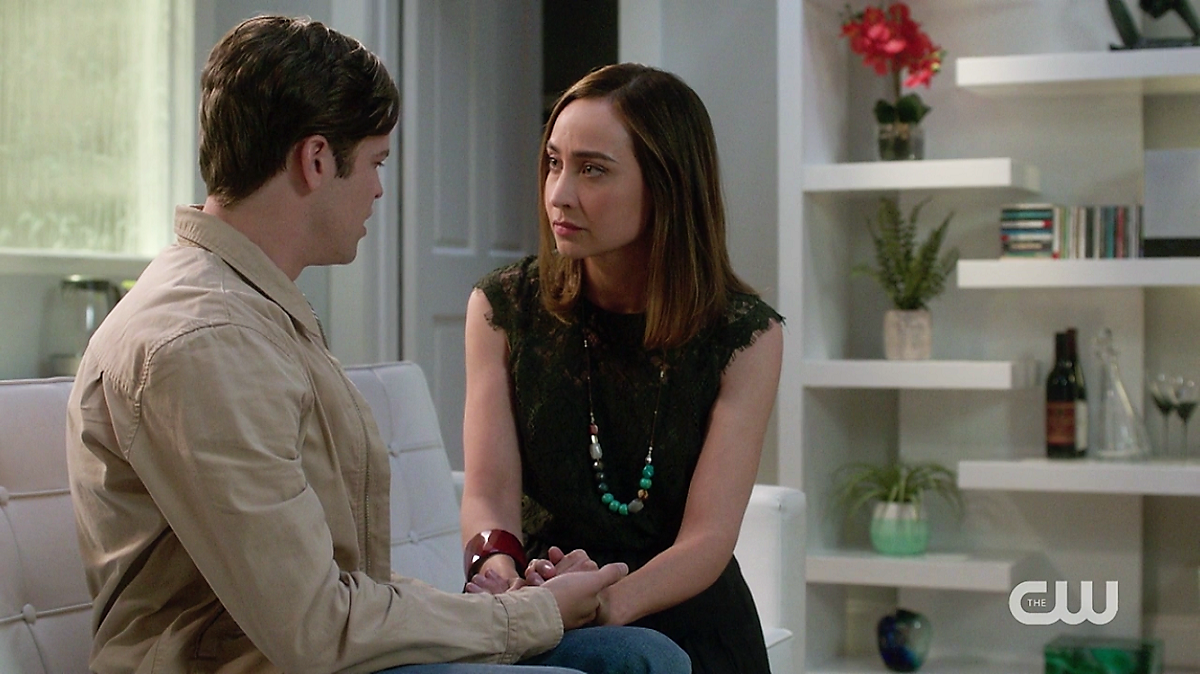 Alexander Calvert as Jack and Courtney Ford as Kelly Kline on Supernatural, cwtv.com

Jack shows Mia the video that Kelly (Courtney Ford) made for him. He says he never met his mom and he’d like to see her just once. Mia shifts into Kelly.  Jack tells Kelly that he’s afraid that he’s a monster.  Kelly tells him that it doesn’t matter what he is. Monsters can do some good in the world.  She hugs him to make him feel better.

Dean gets a call from Sam. Sam was too late. The shifter is gone and the patient is dead. Dean tells Sam to get back to the office.  After he hangs up, Dean says to himself that it was really easy. He looks down at the real Dean on the ground, bleeding from his mouth.  This is going to be interesting.

Mia comes back as Mia. Jack thanks her for helping him.  Shifter Dean burst in the room and attacks Jack.  He peels off his skin shifting back into Buddy. (Gross!)  Buddy handcuffs Dean to the fireplace.

Buddy is tormenting Mia while Dean wakes Jack up. Dean tells him to snap his cuffs. He uses Sam’s belief in Jack to get him to try.

Buddy tells Mia that he wants her to embrace what she is.  He wants her to kill Dean and Jack, or Buddy will kill her.  Mia tells Buddy to kill her.  Sam arrives at the house and Buddy hits Dean, knocking him out.  Buddy uses Dean’s voice to draw Sam into the room.  He holds Mia while waiting for the door to open.

Jack wakes up just enough to throw Buddy backwards when he shoots the gun. Jack also deflects the bullet headed for Sam.  Sam draws his gun and shoots Buddy, killing him.  Mia says she will take care of Buddy’s body. She feels bad about what happened, saying she only wanted to help people.  Jack assures her that she did.

Back the bunker, Jack is getting some water when Dean comes in. Jack stiffens up, unsure of how to act around Dean. Dean tells Jack that he did good and leaves. Jack smiles at the compliment.

Dean apologizes to Sam for upsetting him earlier.  He says Sam may be right about Jack since he saved them for the win.  Sam says Dean may have been right about Mary.  Maybe she is dead and Sam is in denial.  Dean tells him not to give up hope.  He needs Sam to keep the faith for them both because right now, Dean doesn’t believe in anything.

In a field somewhere, Castiel wakes up again.  The cosmic being let him go. 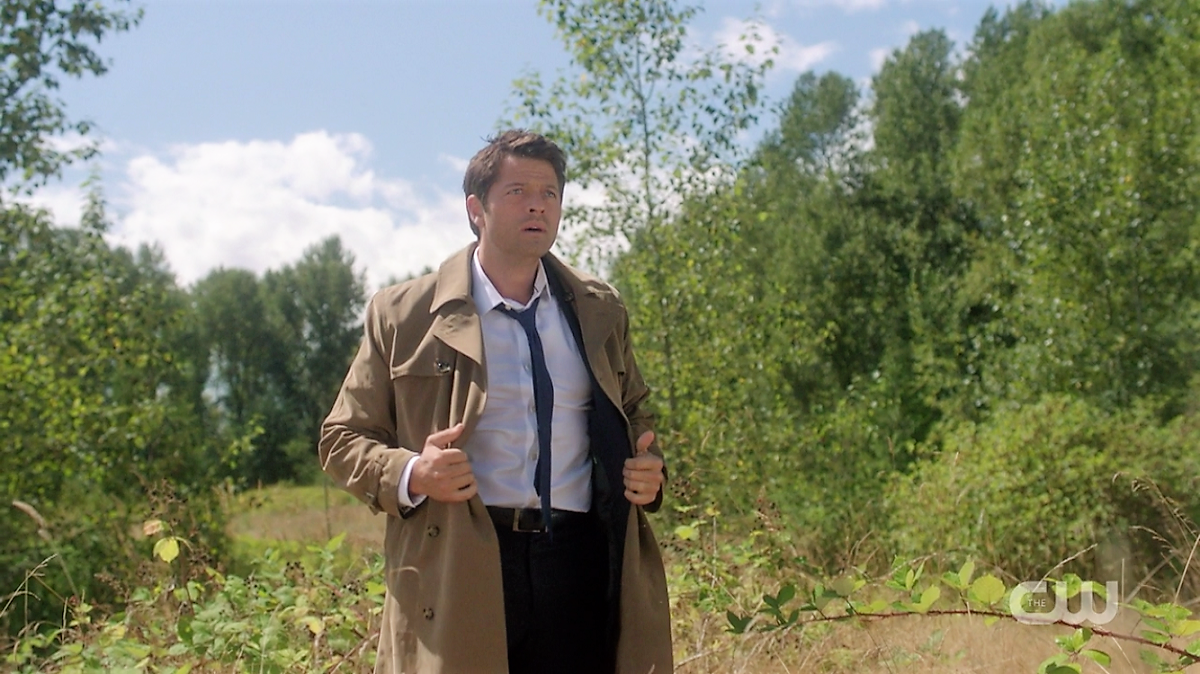 Yay! Cas is back!  I’m excited for him to rejoin the team!  That was interested to watch Cas face himself in the struggle to return to Earth.  The other Castiel was very entertaining.  Misha is a brilliant actor!

I knew Dean would come around about Jack eventually. And I knew it would take Jack using his powers to save them to do it.

Dean has been so angry this season. He needs therapy more than anyone.  Especially since we know that Cas and Mary are alive.

It was good to see Jack be able to talk to Kelly, even though it wasn’t really Kelly. She was the only goodness that he knew.  He has Sam, but even Sam has some doubts about Jack. Kelly had none.  I can’t wait to see how Castiel’s presence will affect Jack.