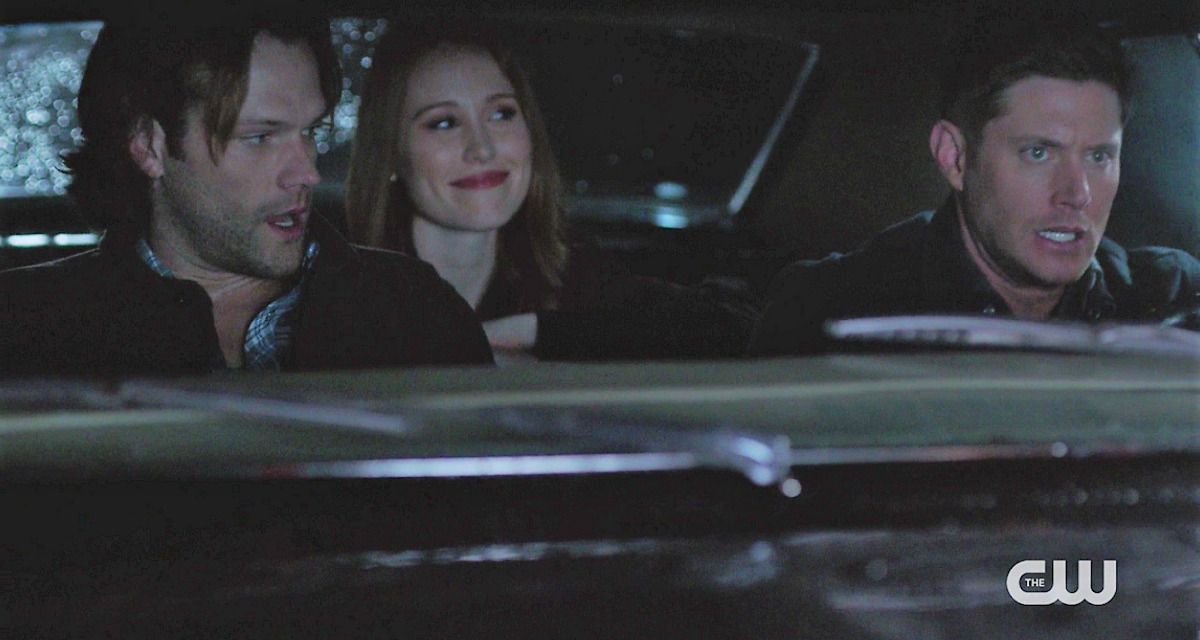 The Winchesters need his grace to get back into the Apocalypse World where Ketch (David Haydn-Jones) is currently searching for Mary and Jack.  There is really no other way to get back. So the search is on for Gabriel in “Funeralia.”..which means the boys may need to call in some favors.

First up, Rowena MacLeod (Ruth Connell). After Sam let her go with a spell from the Black Grimoire, she used that spell to give herself unlimited power.  The Winchesters don’t know that and when they call her, she’s too busy to help anyone but herself. She takes their call at a gala at an art museum in Oregon.  She’s not there for the art or the wine. Rowena is there to find a specific person and Tango! Rowena and her new best friend Bernard (Jason William Day) cut up the rug for everyone to see. During the dip, Rowena casts a spell in the direction of her target, burning her alive.

Since Rowena won’t help the Winchesters, Cas suggests talking to the Angels.  They may have a way to track down Gabriel. It’s risky, since Cas is not Heaven’s favorite angel, but it may be their only hope.  Sam gets wind of a spontaneous combustion investigation in Oregon at an art museum. Coincidence? Yeah Right! Sam said if she was ever up to no good, he’d take care of her. So the Winchesters are headed to the Pacific Northwest.  And Dean okays Cas’ plan, but reminds him…”Don’t get dead.”

Sam and Dean leave to track down Rowena and find they have a stowaway.  Her name is Jessica (Kayla Stanton) and she’s a reaper. Dean actually met her in Advanced Thanatology when he went into the veil.  She’s been watching them ever since. Why? Because Death a.k.a. Billie told Jessica to keep an eye on them just in case. Jessica is pretty impressed with Sam’s extensive array of hair products.

Jessica tells them that Death is interested in Rowena’s activities.  Four people have died before their time. Their deaths can cause a disturbance in the for…wait…in fate. If she keeps killing people before their time is up, Death will have to hit the reset button, causing a mass wipe out of humanity.  She also tells them about the books of everyone’s fate in the veil. Dean has see the many versions of his death. In every version of Rowena’s death, Sam is the one who kills her. Hmmmm….

But there’s more!  Rowena isn’t just killing people, she’s killing reapers too!  She is trying to get death’s attention. As her latest victim lies dying, a reaper appears to let Rowena know that Death doesn’t negotiate with witches.  Her phone keeps ringing and it’s the Winchesters calling. She knows they will never give up so she calls them back to set up a meeting.

They meet Rowena in a bar, where she tells them why. She says that it’s her fault that Fergus chose the path that he did. He deserved better. So she is going to keep killing reapers until Death meets with her and gives Crowley a second chance.  She’s put Death on notice and there’s nothing the boys can do to stop her. Dean reveals that in every version of her death, Sam is the one who kills her. Sam says it won’t’ happen that night and tries to put cuffs on her. But she’s not really there!

Sam sees her by the door and runs after her. Dean follows, but is stopped by Bernard.  While Dean and Bernard fight, Sam catches up with Rowena in the alley. He pulls his witch-killing gun on her to stop her.  He understands what she’s doing, but she’s messing up the universe. Dean says Death won’t give her what she wants so STAP!  Rowena won’t stop, so she tells him to shoot her. Bang! Nope…Rowena stops the bullet with her new power. She’s hurt that Sam would actually kill her. She puts a spell on him and he falls asleep. Dean catches up and finds Sam’s gun in the alley.

Amanda Tapping as Naomi and Misha Collins as Castiel in Supernatural, “Funeralia” -cwtv.com

Cas goes to the playground and Indra (Luc Rodrique) shushes him.  Indra is half drunk and ready to let Cas kill him with his angel blade.  Cas asks what’s really going on and Indra tells him to find out for himself.  Cas goes through the gates to Heaven and meets Duma (Erica Cerra). Before she can say anything, Cas starts talking about Gabriel and the threat of evil Michael and how he needs their help.  Duma says they might be able to help each other.

They leave him in the lobby for a long time and Cas notices that every now and then, the lights flicker.  Like the power is trying to go out. Duma and her entourage return and tell Cas that if he brings Gabriel to them, they can help him fight evil Michael.  But he can’t find him…Cas came to them for help to find Gabriel. That’s when Naomi (Amanda Tapping) steps forward. Yes, THAT Naomi! She says it’s not that they won’t help him, they can’t.

Naomi admits to Cas that there are only nine angels in Heaven, present company included and like two on Earth. They can’t leave Heaven or the lights will go out.  They need any angel, especially an Archangel. News about Gabriel is a blessing. Gabriel’s power would keep Heaven running. Without him, Heaven will crumble and all the souls would be unleashed on Earth. Ghosts everywhere!

A Dance with Death

Rowena ties up Sam and explains that her new power has given her clarity.  She says everything she did before has taken everything away from her. There’s only one way to stop her…Sam.  And if he’s dead, then no one can stop her. Death will have no choice but to meet with her. She puts some kind of magical concoction together  and touches Sam’s chest, shocking him. Sam scream in pain. Death (Lisa Berry) appears to tell Rowena that she’s messing up the natural order. Rowena tells her to bring back Crowley and it will all stop…or she will kill Sam.  Death tells her to go ahead and kill him. None of them will like what will happen if Sam dies, but Death doesn’t do blackmail.

Rowena says what happened to Fergus is not fair and shoots rays of power at Death. Death just stands there…unaffected by Rowena.  Rowena breaks down, saying she doesn’t know what she’s doing. Death comforts her, saying sometimes life is unfair, we lost things and make mistakes.  Some things can never be fixed and you have to live with it. Rowena assumes that Death will take her, but they all know how Rowena’s story ends. Dean busts in to save Sam. Death says hello and that she will see him again soon.

Naomi takes Cas back to the playground.  She asks Cas to bring Gabriel home. Until then, they will do their best to keep things running.  Cas says they will find a way to fix everything, but Naomi says this may not be fixable Everything ends (Except Supernatural).  For now, she is closing the gates to Heaven.

Sam and Dean sit and talk with Rowena, telling her that Crowley’s death was not her fault. He made his own choices, just like everyone does.  Sam asks for her help to save their family and the world. Dean says it’s a way for her to be redeemed. Sam lets her know that Lucifer is back. Rowena says she’s horrified and scared, but Lucifer isn’t’ the one who’s going to kill her.  Sam says she changed other people’s fates, so maybe they can change hers. Dean asks if she’s in or out.

RELATED: Catch up with Season 13 of SUPERNATURAL Here!

Of course Rowena is in! And with her power, she might be able to find a way for the Winchesters to get in and out of Apocalypse World. I love Rowena. There’s no one else like her.

OH! What did Death mean by ‘soon’?  How soon? Didn’t she tell them that they are too important to die right now.  I hope that soon is much later.

It’s always fun to watch Cas go home.  You never know if the angels will be happy to see him or not.  And Amanda Tapping! She’s always awesome…as a good or evil angel. But why didn’t she tell Cas about Lucifer? Hmmmmm…