Cas is back on Supernatural! Just as Dean was about to give up on hope, his best friend calls from out of the blue.  Now maybe Dean will be a little nicer to Jack. With Cas in the picture, Jack has someone who truly understand the divine power.  Now maybe Jack will be able to understand the angel part of him. Dean (Jensen Ackles) gets the chance to live out his cowboy dreams in “Tombstone”.  With Sam (Jared Padalecki) , Castiel (Misha Collins), and Jack (Alexander Calvert) at his side, what could go wrong?

For starters, Dean is hunting in a graveyard with a man he calls Sarge. The two have their guns drawn and are looking around. Dean tells him to wait there and he will flush out the guy they are looking for.  A hand reaches up and drags the Sarge underground.

Back up, back up…48 hours earlier.

Dean and Sam meet Castiel at the phone booth in an alley.  Cas says he annoyed a cosmic being so much that they sent him back.  Sam asks where he was. Cas explain The Empty, dark and nothing. He tells them that he heard a voice call his name and woke up.  He thought the Winchesters did something to bring him back, but they didn’t. Who has that kind of power?  Jack.

At the bunker, Jack is surfing the web when Sam and Dean come in. Jack looks at Sam and knows something is up. Castiel walks in and Jack is shocked.  He’s happy to see Castiel and says he has missed him. He shows them that he can move a pencil telekinetically.  Jack is proud of himself.  He’s more excited about the case that he is researching.  He learned that by watching Sam and Dean.

A vintage pocket watch was taken in for authentication.  The watch was supposedly buried with the owner, 20 years ago.  They went to the gravesite and it was empty. That can only mean one thing…ZOMBIES!  This happened in Dodge City, Kansas.  Dean is intrigued.  They decide to at least check it out. Team Freewill 2.0 is on the case!  The guys check into a hotel with a crazy cowboy theme that Dean knows all about.  He really likes cowboys.  Dean even brought his own cowboy hat!  Sam likes seeing Dean in a good mood. They got Cas back, so that’s a big win.

A local cop finds an abandoned truck on the highway. He has the dispatcher run the plates. While he’s waiting  the passenger door of the truck opens, but no one gets out.   The cop goes to investigate and doesn’t see anyone..  He ears someone in the corn fields and get scared.  Someone grabs him and drags him under the truck. 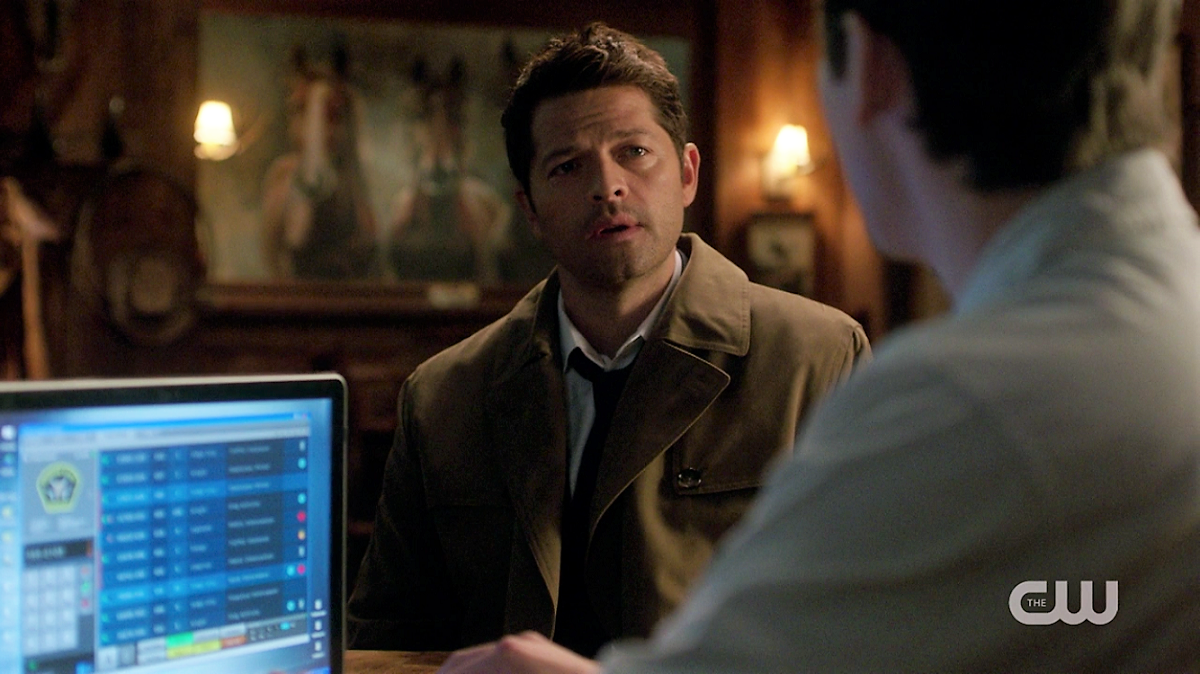 Jack fills in Castiel on all that has happened since he was born.  Cas apologizes for not being there for him.  Jack says it’s okay, he understand why his mom trusted Cas. Jack feels safe with Cas. Cas says Kelly thought Jack would change the world for the better and he would do amazing things. Cas thinks she was right.  They get an alert from the Dodge City police.  Jack runs into wake up Dean.  Dean pulls a gun on Jack.  Dean wakes fully and asks for coffee.  He’s an angry sleeper.  The guys go over the report.  Sam and Jack will go to the graveyard. Dean and Cas will go to the crime scene after Dean finishes his coffee.

Dean and Cas arrive at the crime scene with the appropriate attire. He tells Cas to act like he’s in Tombstone, the movie. Cas’ response, “I’m your Huckleberry.” They get out of the car and meet Sgt. Joe Phillips (Eric Schweig). They introduce themselves as Agents Russell and Val Kilmer. (Hahaha!)  Sgt. Phillips, or Sarge tells them what happened to the victim, Deputy Carl Phillips.  Sarge asks why the Texas Rangers are in Dodge City. Dean loves that…Rangers.  He tells the sergeant about a grave robber that they are tracking.  The sergeant says Carl had a similar case.

Sam and Jack go to the mortuary and meet the undertaker, Athena Lopez (Sarah Troyer).  They ask her what happened that night in the graveyard, but she was at a concert. She gives them permission to look around the graveyard.  They open the coffin from the only open grave and there is a big hole in the coffin.  Sam jumps in the grave to dig around in the dirt and pulls out a pelvis bone that has bite marks on it.  It’s a ghoul, not a zombie.

The guys meet back up at the hotel. They don’t know who to look for because a ghoul can take form of anyone it has eaten. Jack looks up the plates on the truck and finds it on a traffic cam. They look at the driver. It’s Dave Mather (Jonathan Cherry). Dave Mather was one of the Dodge City gang members…who died in 1886.  The guys get ready to hunt Dave.  Jack recognizes Dave…he’s Athena’s boyfriend

RELATED: 7 Characters We Need in the SUPERNATURAL Alternate Universe

Athena is working on a body, with her headphones on and doesn’t know that someone is behind her. Dave Mather sneaks up and scares Athena. He kisses her to apologize.  He gives her a letter from an art school. She got accepted and is excited.  Dave tries to convince her that leaving is not a good idea.  She changes the subject, telling him about the FBI paying a visit. 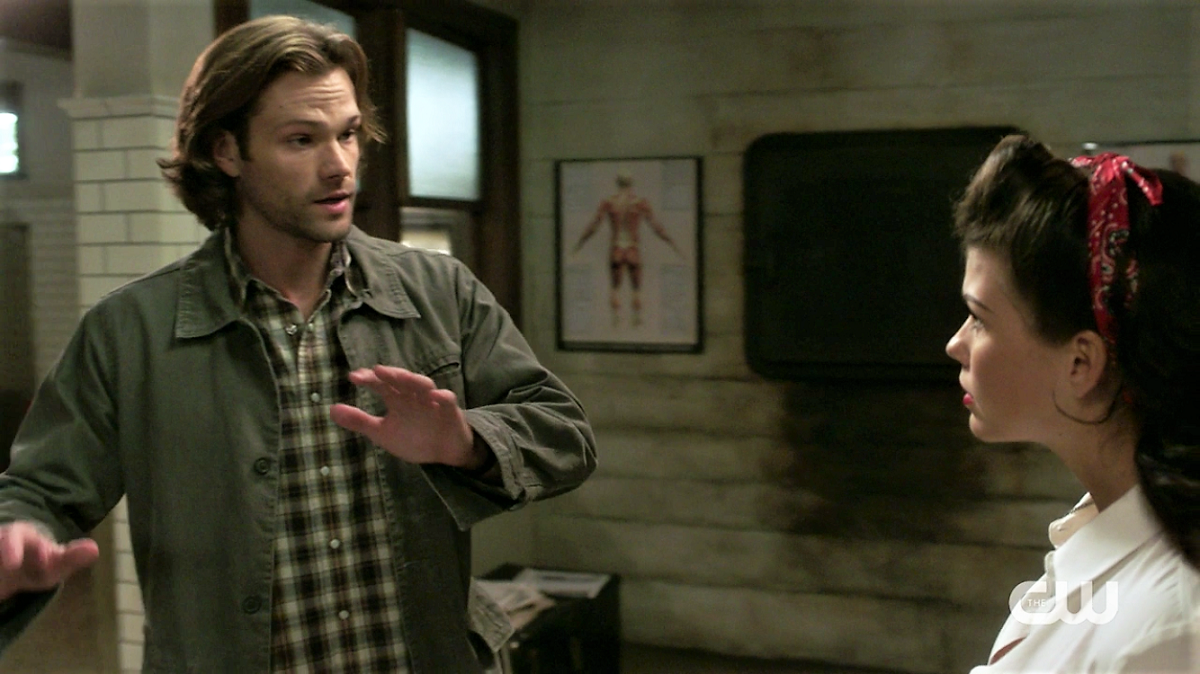 They go to the undertaker’s house. Sam and Dean go in and ask for Dave. They tell Athena that they need to talk to him about the grave robbery and murder. Athena says he went to the bank…that he is currently robbing.  Team Freewill 2.0 is waiting for Dave when he leaves the bank.  The ghoul thinks he has the upper hand and will feast on four guys later.  He starts shooting at Sam and Dean who are shooting back.

Jack thinks he can help. He runs out to face Dave. Dave shoots Jack twice in the chest, but Jack is okay.  Jack smiles and uses his powers on Dave. At the same time, the bank security guard walks out to grab Dave from behind. He gets hit with Jack’s powers and is pushed back with Dave into a pole.  Jack is scared that the guard is dead.  Dave runs away and Dean goes after him.  Dean loses him when a car almost hits Dean.

The guard is bleeding from his head.  Jack begs Castiel to heal the guard.  Cas tries, but can’t heal the man.  The guard is dead. Jack is really sad about his death. Sam tells Cas this is the first time he’s hurt someone that didn’t get back up.  Dean tells Sam and Cas to take Jack back to the bunker. He will handle Dave Mather.

Dave returns to Athena’s house.  He says he robbed a bank for her so she can go to school.  He talks about robbing graves. Athena knows he is the robber and the murderer.  He admits to killing Carl.  She gets upset and tells him to leave.  Dave gets angry and says they are leaving. There are car lights shining through the windows.  Dave is out of time.

Dean arrives at the graveyard. Sgt. Phillips is already there to take care of Dave. He says the bank teller knew enough about Dave to give them all the information he needed.  Dean asks for his badge, but Carl says he’s there on family business. They both agree that Dave cannot leave alive. Dean tells the sergeant to aim for the head. Back to the opening scene…Sarge has just been taken by the ghoul.  Dean jumps in the hole to follow them.

Sam and Cas try to console Jack. Cas says he’s killed people too.  It’s doesn’t get any easier to handle, but Jack can’t let him get him down.  He can only try to do better from now on.  Sam says they believe in him. Jack tells them to stop talking. He’s taking this death really hard.

Dean follows the path back to Athena’s.  He finds Athena tied up.  Dean tells her that Dave isn’t exactly alive.  He finds Sarge beat up and asks where Dave is.  Dave comes from behind him.  He tells Dean that he’s not fast enough to shoot him.  Dean agrees, but says Sarge is.  Dean moves to the side, Sarge shoots Dave in the head.  Dave’s head is shot clean off of his body. The next morning, Sarge asks Dean what really happened there. Dean tells him that Dave killed Carl and tried to kill Sarge so he shot him dead.  Dave also killed the security guard at the bank.  And Dean was never there.  The Sarge agrees. 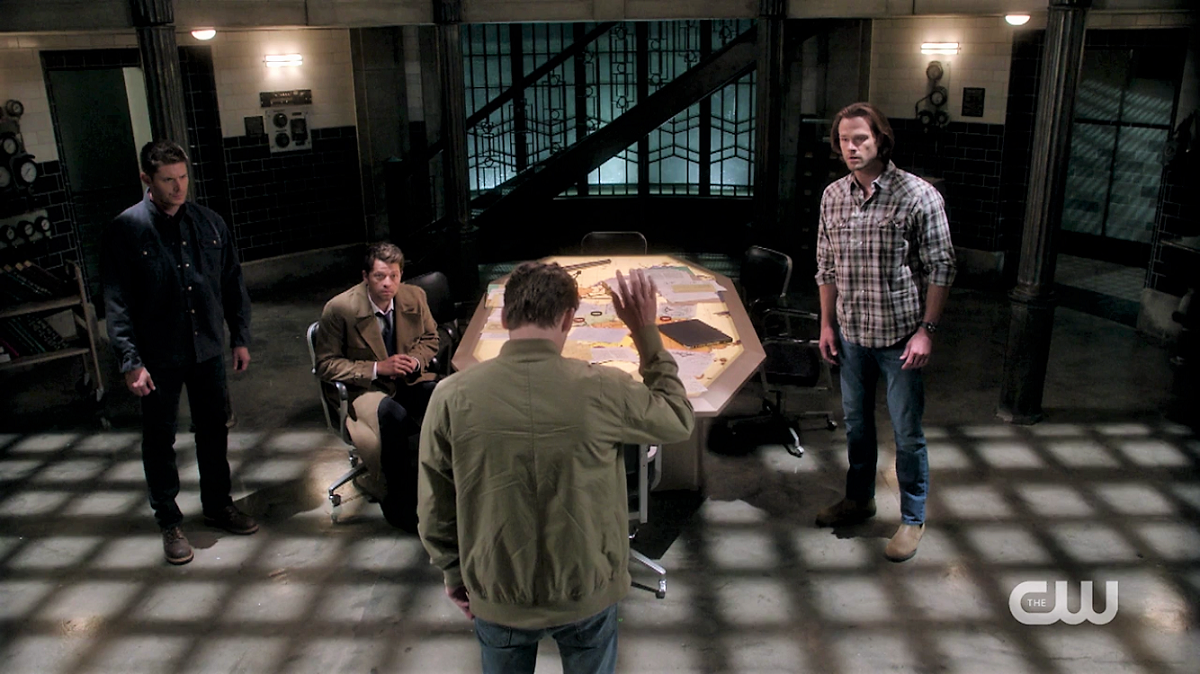 Dean returns to the bunker and tells Sam that all is well in Dodge City.  Jack is still angry about the security guard’s death. Sam starts to tell him something, but Jack stops him. Jack says they are afraid of him. They are right about him…he’s a monster.  Dean tells him that they all have blood on their hands. So if Jack is a monster, they are all monsters. Jack says every time he tries to do something good, people get hurt. If he stays, he will hurt them too.  They are all he has and he can’t let them get hurt.  Jack says he has to go.  He pushes them away, apologizes, and disappears.

Real All of the SUPERNATURAL Recaps Here!

It was great to see Dean in a good mood again. And to see Cas back in action…he’s so awkward, it’s great!  I love the theme of the episode. The whole Tombstone, Wyatt Earp/Doc Holiday thing that these two had going. They are so cute!

I feel bad for Jack. He shouldn’t have left.  He’s in more danger away from the Winchesters and Castiel.  Yeah, they were trying to make him do good, but they needed him to explore his dark side too so he could fully understand who he is.  Hopefully they find him before Lucifer returns. If he ever returns!