The Winchesters are finding their way back to their usual selves in Supernatural “Advanced Thanatology”. Dean (Jensen Ackles) even thanked Jack for saving their lives! There’s hope after all. Maybe. Sam (Jared Padalecki) also told Dean that he has no faith in anything anymore.

The biggest thing to happen is that Castiel is back on Earth! Misha Collins gave a great performance last week. Castiel faced…well, himself last week. It took some convincing, but Cas is finally back. When will we get that awesome reunion that we…I need to see so much!?

In Advanced Thanatology, Dean deals with a familiar face in between the world of the living and the dead. Will this help restore his faith?

In Colorado, two boys Shawn (Seth Isaac Johnson) and Evan (Josh Hudniuk) enter an old home. They are both holding cameras. Shawn is scared. He doesn’t want to be there, but Evan pushes him to look around.  Evan says its the home of a doctor who used to treat his patients in his home and lobotomized them.  Shawn goes into an office of Dr. Avery Meadows.  He finds some really creepy, cult-like masks displayed on a bookshelf Evan encourages him to take one, but then Dr. Meadows’ ghost show up with a drill in hand.  Shawn and Evan run. Evan drops his camera and you see the doctor grab him, knock him down and put the drill to Evan’s head. Shawn gets out and can hear Evan screaming from inside. 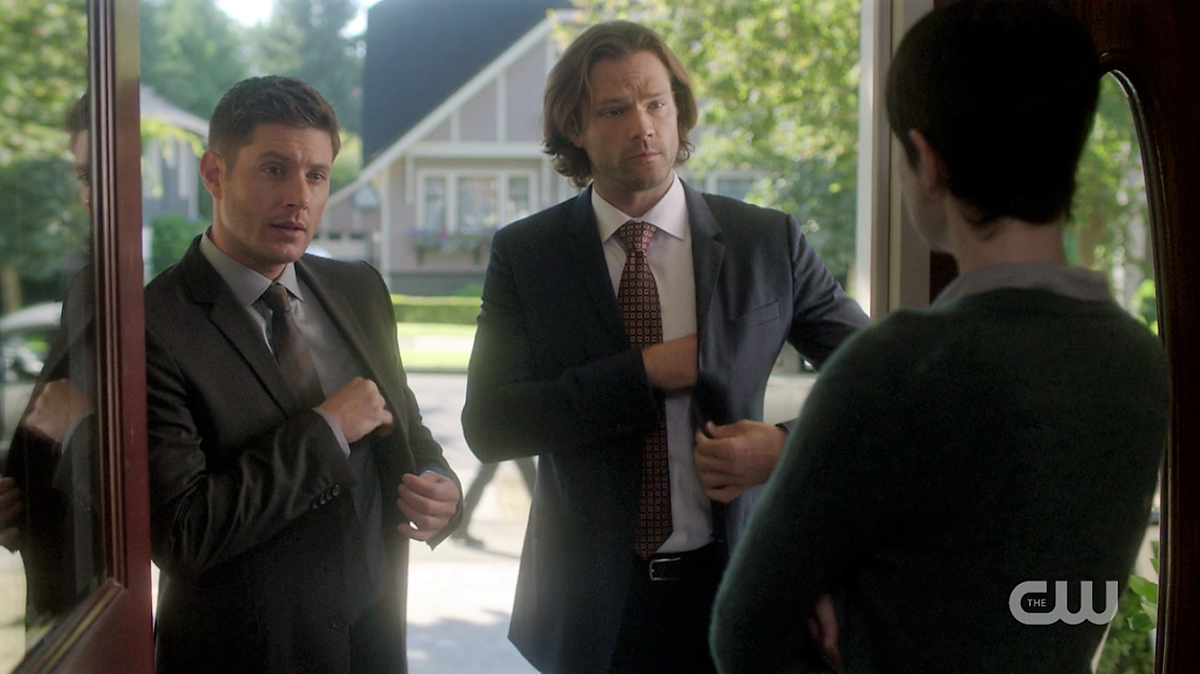 At the bunker, Sam tells Dean about the case and wants to go check it out. But what about Jack (Alexander Calvert)? Well, Sam set Jack up with some awesome 80s movies that will keep him occupied for days. Dean and Sam make their way to Colorado. They go straight to Shawn’s house, but Shawn is so traumatized, he’s not talking.

So Sam is being really nice to Dean. He leaves Jack at the bunker, lets Dean be Agent Page for once, and now, he wants to take Dean to a strip club. Why? Because Dean is having a hard time dealing with his grief.  On to the strip club…

Shawn wakes up screaming from a nightmare. His mother checks on him and calms him down. When she’s sure he’s okay, she leaves.  Shawn looks up and sees the doctor with his drill.

The next day, Sam goes to interview another friend of Shawn and Evan’s. He tells Sam that Evan is probably hiding out somewhere, just trying to scare everyone. He admits that Evan and Shawn had plans to go to Dr. Meadow’s home where he treats his patients.  The kid was too scared to go with them.

RELATED: SDCC 2017: SUPERNATURAL Panel Reflects on the Last 12 Years and Looks Ahead to Season 13

Sam finds Dean nursing his hangover and tells him about the doctor.  Sam shows Dean a picture of a plague mask. It’s the same kind of mask that Shawn took.  They get a call from Shawn’s mother. Shawn is missing. They go investigate the house and immediately encounter Dr. Meadows and his drill.  The doctor is really strong. Both Winchesters  try to fight him, but he’s quick.  He throws Sam to the side and goes after Dean. The doctor has the drill at Dean’s head and disappears. Sam used an iron bar to get rid of the ghost. 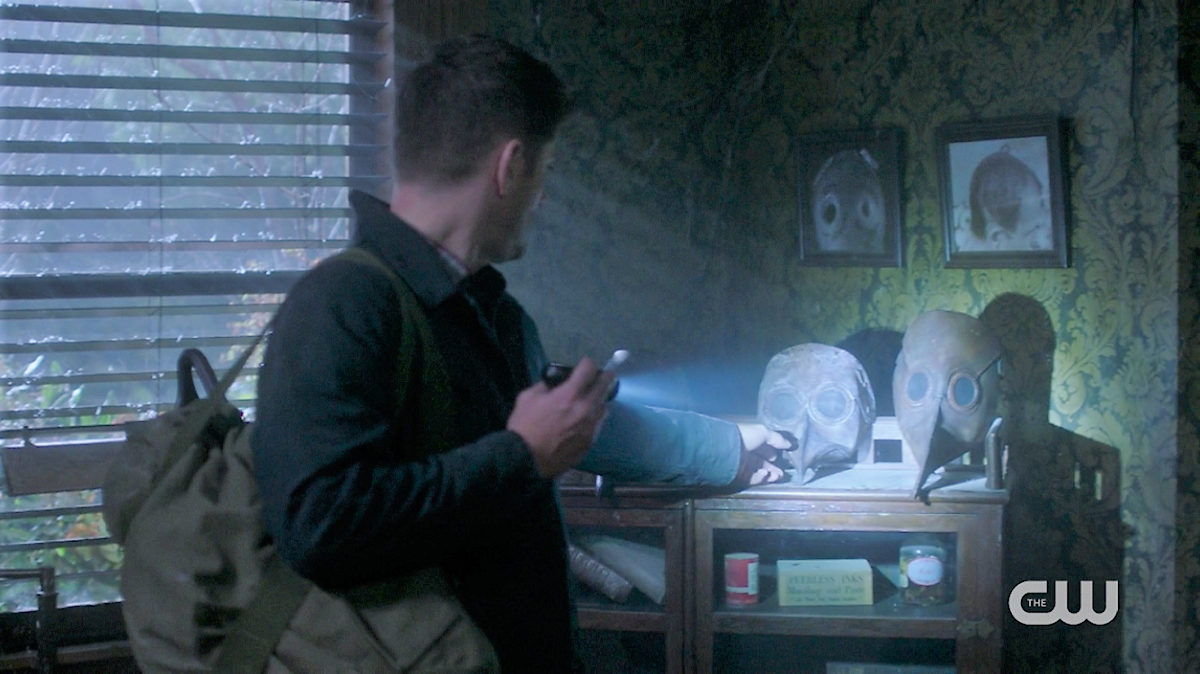 They make their way to the doctor’s office to look for Shawn. Dean finds the creepy masks. They figure out that the doctor is tied to the masks.  Sam pours salt around the door as Dean starts to burn the masks. The doctor comes in and is able to get past the salt. Dean sets the masks on fire and the doctor burns away…easy peasy right? Nope! There are more ghosts in the house. Dean’s only solution is for him to die so he can find out where the bodies are hidden. He injects himself with something that stops his heart.

On the other side, he sees a patient walking around and starts to follow him. A guide named Jessica greets him to lead him to his next life. Dean introduces himself, but then takes off after the patient. Jessica knows who he is and informs her superiors that Dean Winchester is in the vale. Sam has surrounded Dean’s body with salt.  He gives Dean three minutes to be dead and then will inject him with adrenaline.

Dean follows the patient and finds Shawn. Shawn tells him about how the ghost came to his room and led Shawn back to the house.  Shawn puts the stolen mask back and kills himself with a drill. He tells Dean that Evan is there too and they can’t leave. Dean says he’s going to help them move on.

Dean goes back to his body. His three minutes are up. Sam injects the adrenaline, but nothing happens.  Dean is confused.  Someone appears and says hello to Dean.  It’s Billie (Lisa Berry), the New angel of death. Apparently when Dean killed Death, the next Reaper to die replaces him.  Billie was promoted to Death after Castiel killed her. 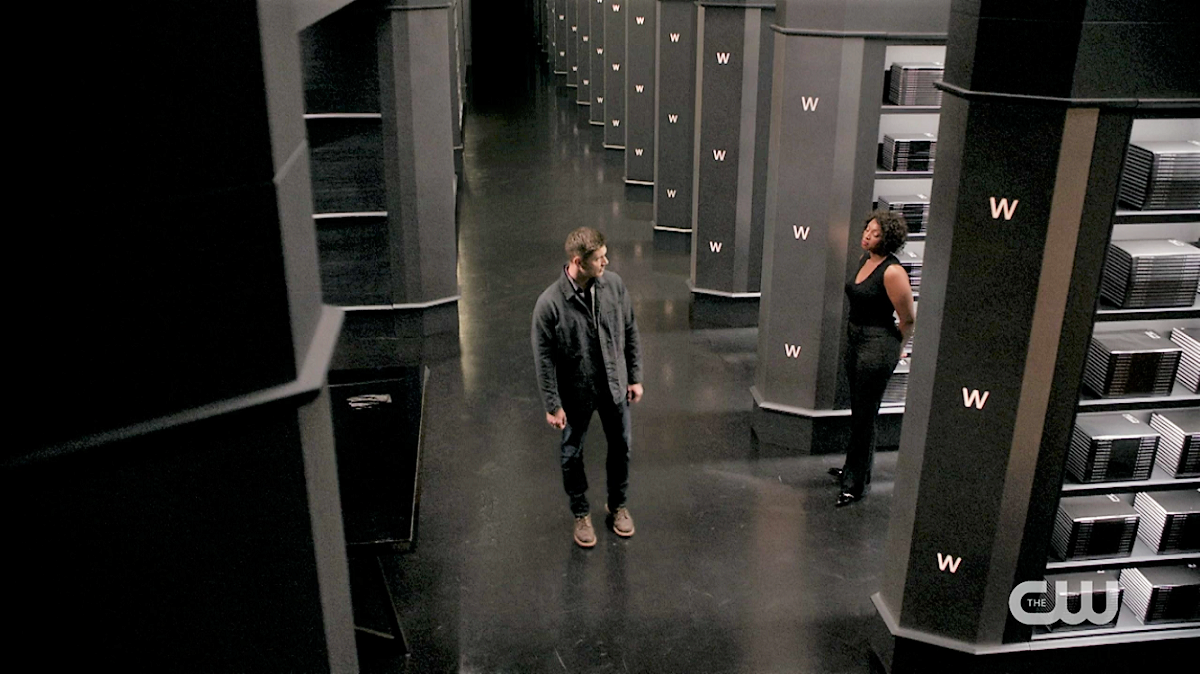 Billie takes Dean to her reading room. He wants to know if she going to keep him dead.  She says it depends on him. She wants to know how he slipped between life and death. Dean asks her to free the Meadows house ghosts and he will tell her anything she wants. Deal!

Jessica takes all of the ghosts, including Shawn and Evan to the next life.  Dean tells Billie about how Jack’s birth caused a rip in this world.  He went there and came back.  Why does it matter? Billie says the multi-versal quantum construct is like a house of cards. She doesn’t need a Winchester knocking it down.

Billie points out that Dean has changed. He didn’t ask for his life when bargaining with Billie. He says there’s no going back when dealing with Death.  Billie says Dean is not the same confident guy. She knows that he tells people that he will work it out, but he won’t. And it scared Dean.  So what’s changed? Dean says it doesn’t matter because he doesn’t matter.  He wasn’t able to save his mom, Cas or Shawn; he’s dragging down Sam…if it’s his time to go, then okay.  Billie determines that he wants to die. She shows him a book on her shelf that says it lists all the ways that Dean dies, but none of them says he dies today.

Now that Billie is Death, she sees the bigger picture.  And she sees that the Winchesters are important. She says he has work to do. She’s not thrilled, but he’s a necessity.  She tells him to live. He starts to ask about Mary (Samantha Smith), but Billie sends him back.

The coroner shows up and removes the bodies. Sam asks Dean what happened.  Dean says he got lucky. Sam asks about the ghost. Dean tries to postpone the conversation, but Sam insists.  Dean tells him that Billie is Death and took care of the ghost. He also tells him the part about them being important and having work to do.  Sam asks if he’s okay. Dean says he’s far from okay. He says he has always believed that what they do is important no matter what the cost.  Now, after losing Mary and Cas, he’s not sure. He just needs a win.

The guys head back home. The phone rings on the way back. Dean answers and has a shocked look on his face. They head to a payphone in an alley where Castiel is waiting for them. 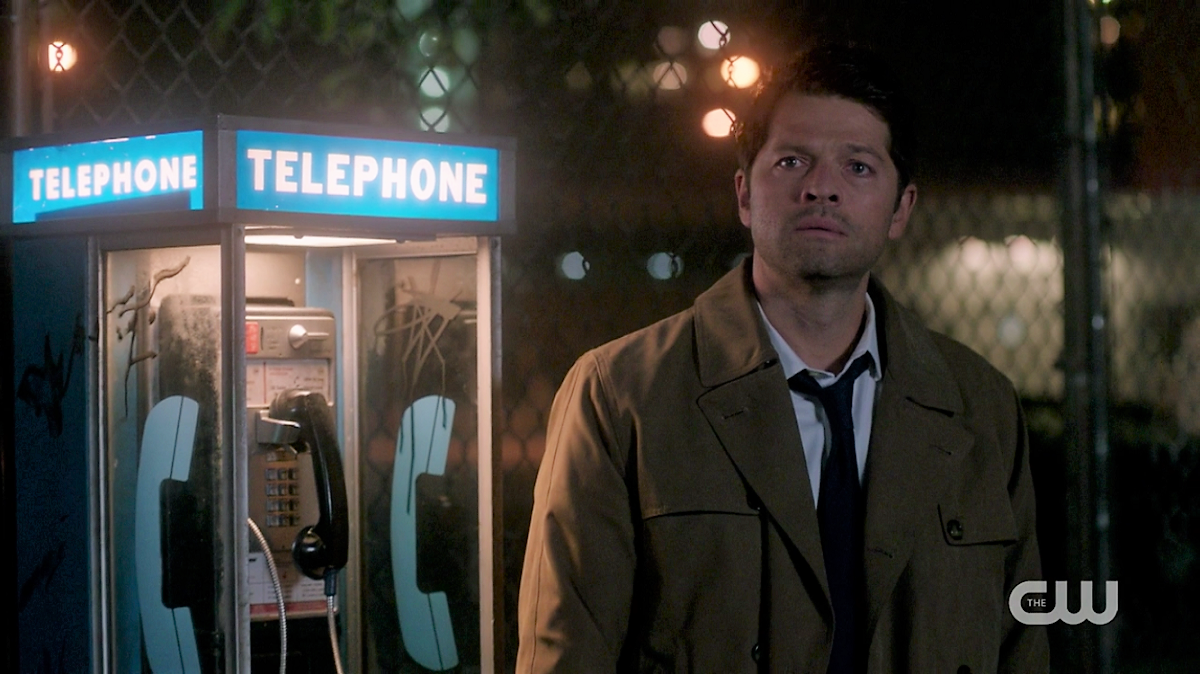 This episode was pretty deep. Dean’s faith has been tested from time to time, but this is probably the most depressed Dean has ever been.  He definitely needs some uplifting. It’s a good thing Cas is back.

We haven’t seen Mary and Lucifer in a few episodes. I wonder when those two will pop up? I kind of like that duo. They compliment each other well.

This episode seemed short, but a lot happened. Now that Cas has returned to the world of the living, the fun can really begin.

OK I know its a bit of a soap-opera, but I loved @HistoryVikings so I am definitely interested in this spinoff! https://twitter.com/GeekGirlAuth/status/1354148523508428800