Sam and Dean agreed on one thing in last week’s Supernatural.  They agreed to take Jack to the bunker.  Sam wants to teach Jack how to be good.  Dean wants to find a way to kill Jack.  Both Angels and Demons want to control Jack for his abilities. Without Castiel and Crowley in their corner, the Winchesters have their hands full keeping Jack safe.  The Fourth Prince of Hell, Asmodeus just might be the biggest threat at the moment.  Lucifer is still trapped in the AltWorld with Mary.  He is keeping her alive to trade her for Jack when they get back to reality.  And if they can stay alive. The AltWorld has it’s own set of ArchAngels including Michael.  Michael has found Lucifer, but says he might need him.  What?

A stranger (Jon Cor) walks into a psychic reading parlor. The psychic is closing up, but she makes an exception. During the reading, the psychic discovers he is no man, but a wraith.  The wraith kills the psychic with a long stinger from his wrist.

At the bunker, as Jack (Alexander Calvert) is exploring, Sam (Jared Padalecki) gives him a message from Kelly (Courtney Ford).  Kelly tells Jack that no one can tell him who to be.  Only he can decide that.  And she believes he’s going to be okay.  After all, he has an angel watching over him.

While Jack is watching the message, Sam gets a call from Missouri Moseley (Loretta Devine).  Missouri is at the psychic parlor and asks for Sam’s help.  Sam sends Jody (Kim Rhodes)out to help.  Dean (Jensen Ackles) finds out and is a little mad.  He doesn’t understand why they can’t help Missouri.  Sam says they need to help Jack. Dean says Sam can stay in the bunker with Jack, but he’s going to help.

Dean shows up to meet Jody and Missouri.  Right away, Missouri reads that Dean is sad about his loses.  Dean examines the parlor with Jody.  Missouri gets a reading that explained what had happened to the psychic.  She confirms that the killer is a wraith who feeds on psychics.  Missouri gets another reading, but this one hurts her.  She calls her son, James (Adrian Holmes).  Missouri tries to tell him that something bad is going to happen to him, but he hangs up on her.  Missouri sends Dean to Georgia to save her son James and granddaughter, Patience (Clark Backo). 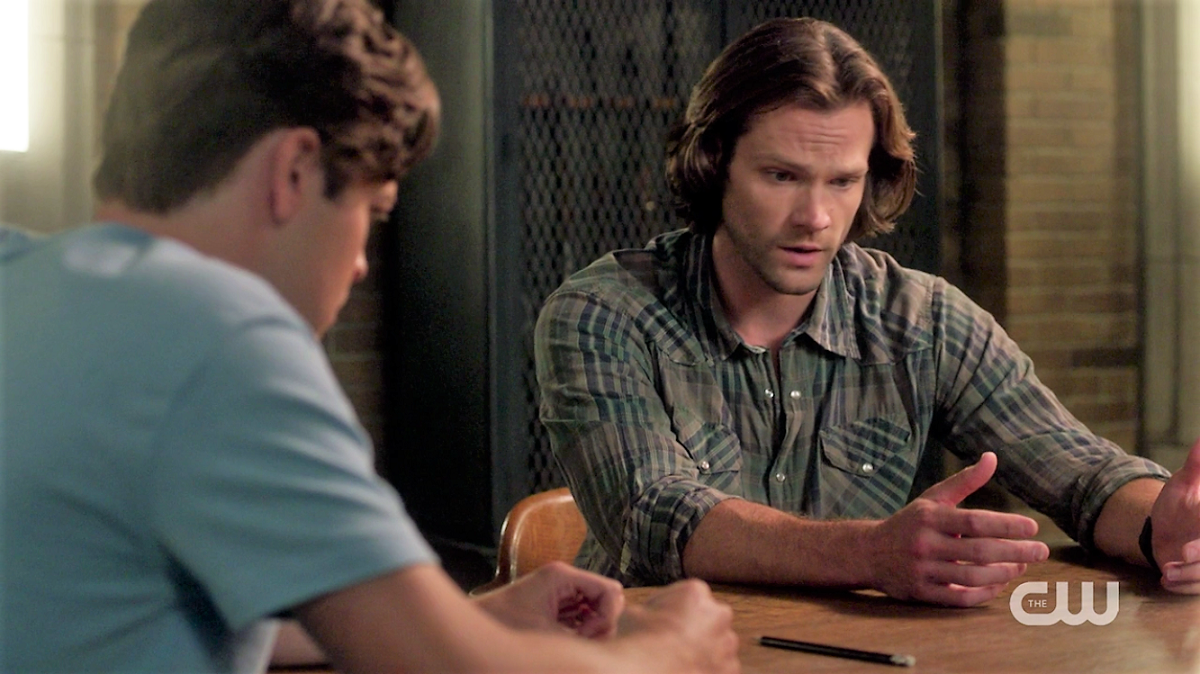 Alexander Calvert as Jack and Jared Padalecki as Sam in Supernatural, cwtv.com

Sam and Jack go into training to control Jack’s powers. Jack is frustrated because he can’t move a pencil.  Jack says using his powers is like blinking, it just happens. With Asmodeus, it was like he was in Jack’s head, making him use his powers. Sam decides to take a break to get food.

The wraith returns to the psychic parlor.  Missouri confronts him.  She says she is supposed to run and scream, but she won’t. The wraith says it would be more fun if she did. Missouri refuses. The wraith kills her.

At a high school, a young woman is leaving  for the day and the lights flicker. It’s Patience.  She finds Missouri dead in the hallway and someone grabs her from behind.  It’s a dream. Patience wakes up and gets ready for her day. She tells her day about her nightmare and he says it was just a dream.

Dean stops on his road trip.  He sees a news report that Missouri is dead.  Dean is determined to stop the wraith. They arrive in Georgia and go straight to James’ house to warn him. They tell him that Missouri is dead and the thing that killed her is after him and Patience.

Later at the school, Patience experiences moments from her nightmare that make her uneasy.  She walk along the hall to see if her dream will come true, but it doesn’t. She also hears Missouri whispering her name. Patience goes back to her locker and gets her books. When she closes the door, the wraith is standing there.  He slams her against the lockers and she knees him the groin.  He hits at her and she tears off his stinger and runs.  The Wraith chases her down and they fight some more.  Dean and Jody show up and shoot at the wraith.  Jody checks on Patience while Dean chases the wraith.   Dean goes outside and the wraith almost runs him over. 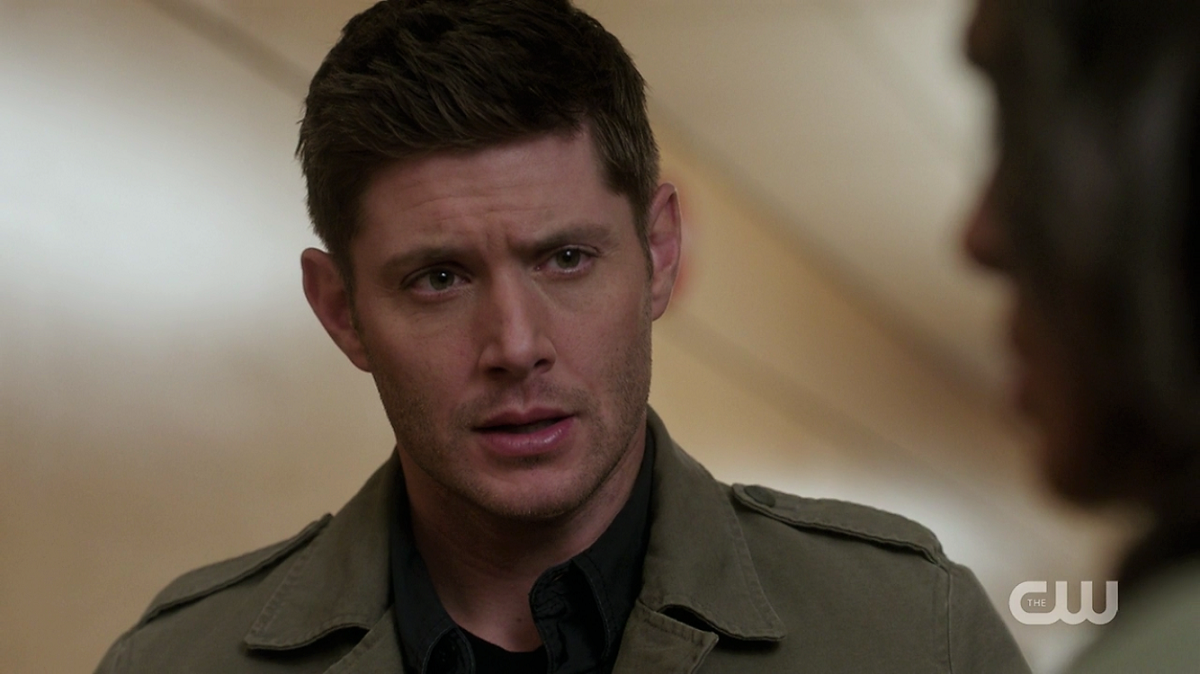 Dean runs back to the lockers and asks if Patience got a good look at the wraith.  Patience tells them he tried to stab her with the stinger. Jody and Dean are impressed.  They  tell Patience that the wraith hunts down psychics. Patience doesn’t believe that she is a psychic, she says there’s no such thing.  She calls Missouri a fraud and says she abandoned their family.  Dean and Jody tell her that Missouri was real and caring, and dead.

At the bunker, Sam freaks out when he can’t find Jack. Jack is sitting in a corner upset that he can’t do a simple trick.  He finally moved the pencil, but it took forever.  Sam doesn’t understand why and Jack says it’s because he probably is evil.  Jack says his mother is dead because of him.  Bad things keep happening, so he must be evil, like Lucifer.   And that’s why Dean wants to kill him.

Sam tells him that none of those things are his fault.  He knows Jack is scared.  Sam is putting a lot of pressure on him.  Sam says he will stop until he can find a better way to train Jack. Jack asks why Sam is helping him.  Sam says he knows what Jack is feeling because he’s been through it.  He says his family helped him and now he will help Jack. Jack is not evil.

Patience confronts her dad about Missouri. James confesses that he was angry with his mother for saying that his wife would be okay, and then she died.  He didn’t want Patience to be influenced by Missouri so he told Patience that Missouri abandoned them.   Jody tells James that Patience is a psychic, like her grandmother. And the wraith will keep coming after her. James wants to run.

Patience goes to her room.  She thinks of her last memory of Missouri when she gave her a broach.  Missouri promised Patience that no matter where she goes, Missouri will always protect her.  Patience starts to pack her bag. She opens her closet and the wraith is in there.  Patience screams.  James, Dean and Jody run to her room, but they are already gone.  Dean and Jody use the city cameras to look for the wraith’s van.  James gets out a box with a map and some stones.  A divination tools to find Patience. 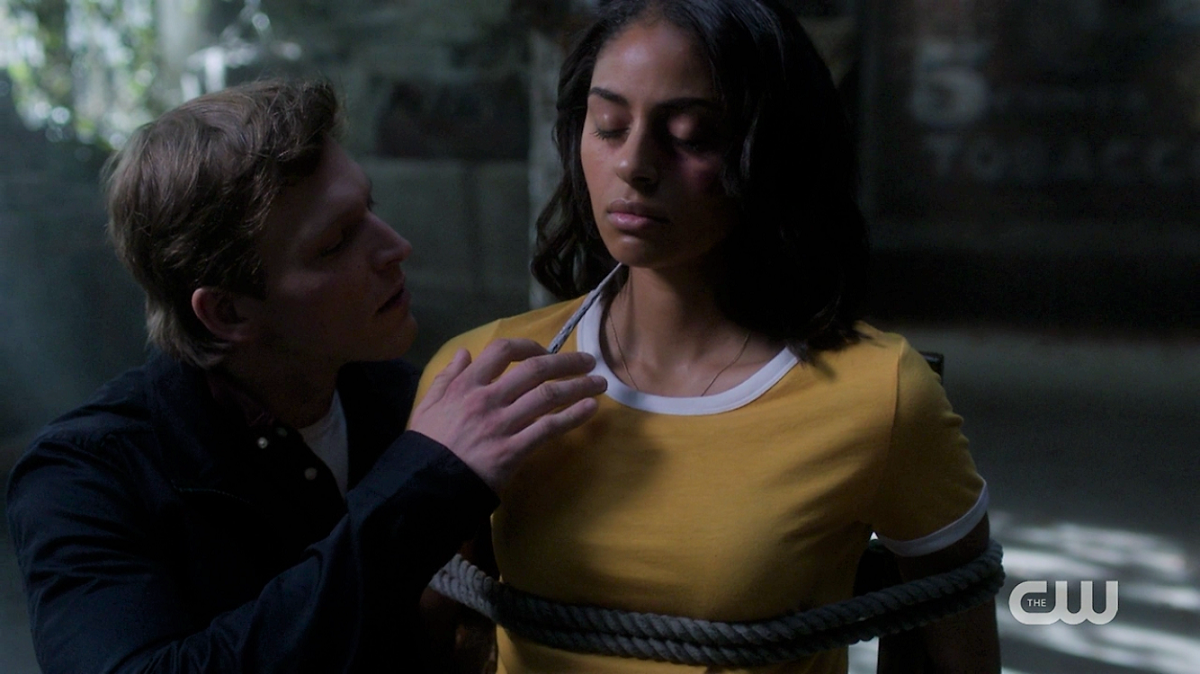 Jon Cor as The Wraith and Clark Backo as Patience in Supernatural, cwtv.com

The wraith has tied up Patience.  He says when he drains psychics, it makes things clear for him.  Missouri was the best and Patience is made of the same stuff.  The wraith’s plan is to keep Patience alive so he can feed on her forever.   Patience tells him that she’s not psychic. He says Missouri thought she was, so he’s going to test to see if she was right.  Dean, Jody, and James rush in and save Patience. Dean and Jody look around while James unties Patience. The wraith comes from behind James and kills him.  Jody approaches him and the wraith stabs her.  The wraith stabs Dean multiple times, killing him too.

It was Patience’s vision!  We go back to when Dean, Jody and James bust into the shed.  Patience uses her vision to warn them all.  The wraith injures James, knocks out Jody and fights with Dean. Dean is able to stab the wraith instead, killing him and saving everyone.

The next day, Dean asks Patience what’s next for them. James thinks Patience should put away her gift. Dean agrees. He says the supernatural life is painful and she has a chance to be happy being normal.  Jody disagrees. She tells Patience to explore who she is and when she’s ready, to call her.

Dean returns to the bunker.  Dean asks about Jack.  Sam says Jack is messed up and it’s Dean’s fault.  Dean says that Jack is going to end up bad.  Jack can hear them talking about him. Sam reminds Dean that he was just like Jack.  Papa Winchester told Dean to kill Sam, but he didn’t.  Dean saved Sam.  And now Sam needs Dean help to save Jack.  Dean thinks Jack cannot be saved. He says Sam only cares about what Jack can do for him. When Dean looks at Jack, he only see everyone they’ve lost, especially Castiel (Misha Collins).  Dean says Jack promised him stuff that made Castiel want to protect him. And now Cas is dead.  Dean can’t forgive Jack for that. 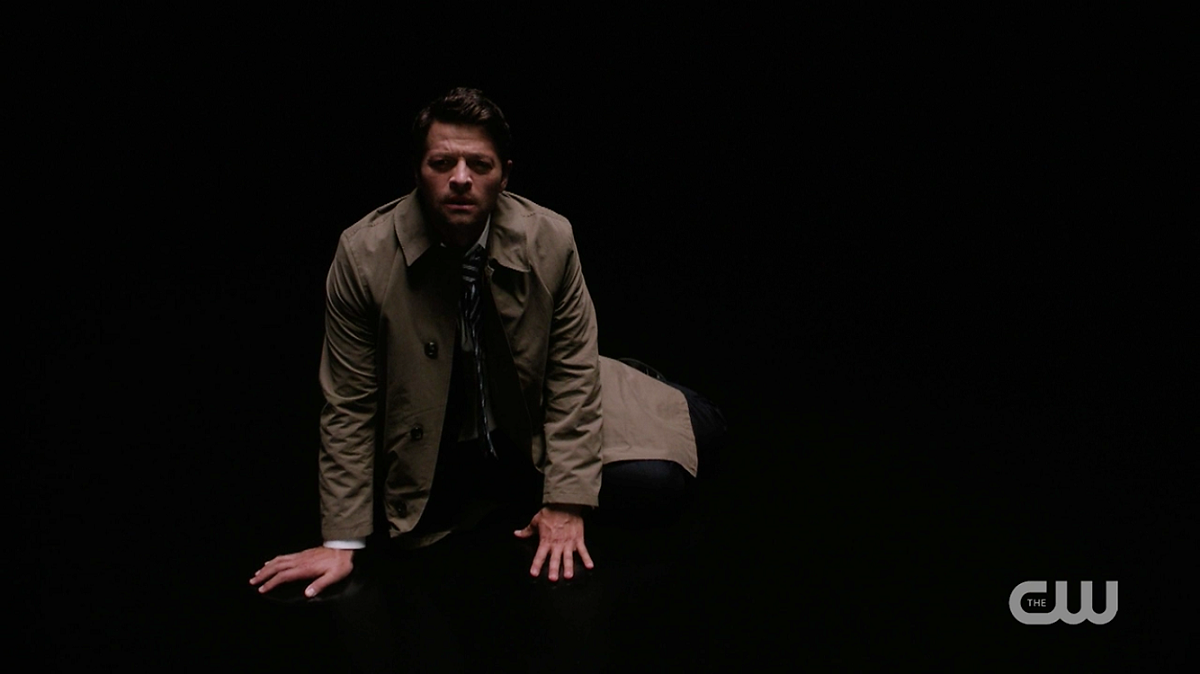 Well, it’s about time Castiel woke up!  I’m so excited for his return.

If you haven’t heard, Supernatural is getting a spin off.  Wayward Sisters.  Basically the show is about Jody and the lost girls that she saves, doing everything that Sam and Dean do.  I think Patience will show up again on that show and will use her abilities to fight evil.  It should be pretty good.

Awwww, Missouri Mosely returns only to die.  We haven’t seen her since season one, but she was a fun character and really connected the boys back to their mother.  Plus Loretta Divine is always great!

Well, Cas is coming back!  I wonder how this will change things for Dean, and especially Jack.