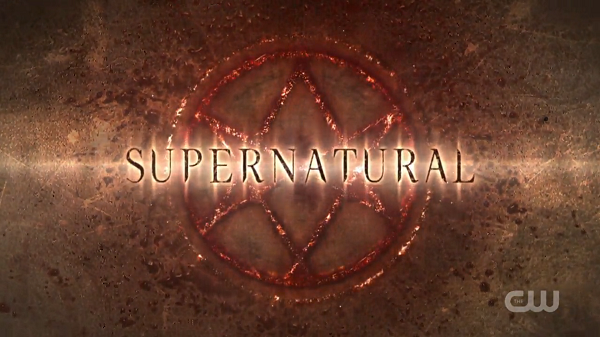 What do the Men of Letters have in store for Sam and Dean?

The Season 12 premiere of Supernatural is finally here!  After months of wondering what would happen to Team Free Will, the wait is over.

On the road so far, The Darkness came and wreaked some havoc in her search for her brother, God. Sam and Crowley decide that their best bet was to release Lucifer from his cage. Castiel becomes Lucifer’s vessel, and Rowena dies but comes back. Cassifer takes his place as the King of Hell and makes Crowley his puppy. We find out that Chuck is actually God and he was hiding out the entire time. Metatron comes through in convincing God to confront Amara and in then sacrifices himself. Sam and Dean, along with Chuck, Rowena, Crowley and Cass come up with a plan to put a soul bomb inside Dean that he would detonate in Amara’s presence. Amara and Chuck ultimately hash things out and as a token of their gratitude, Chuck removes the soul bomb from within Dean and Amara resurrects Mary Winchester. Sam and Cass return to the bunker only to find a woman claiming to be from the London Chapterhouse of the Men of Letters waiting for them. She expels Castiel and kidnaps Sam.

So know Mary is alive, Lucifer is out of his cage and roaming free, Sam is in trouble and it looks like the British Men of Letters are about to start something. Whew!

Let’s get to it! Spoilers abound!

This episode focuses on what happened to everyone after Amara and Chuck left Earth. It starts where Season 11 left off, with Dean and Mary (Samantha Smith) reuniting after 33 years. At first she has no idea who Dean is; when she last saw Dean he was 4 years old and Sam was a newborn. Dean assures her that he is her son and the memories come flooding back of the night she died. Dean gives her further proof of his identity by telling her the story of how she met John. It’s a very cute and sweet story. This is enough convince Mary that he is telling the truth.

After Castiel was expelled from the bunker, we find him crashing landing in a field in Kansas. Eager to get back to Sam, he knocks out a poor trucker who stopped to help and takes his truck. 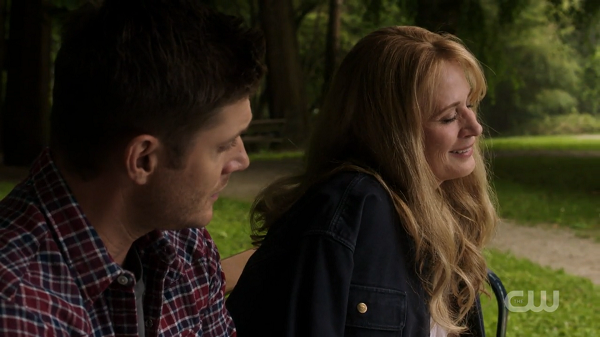 Mary and Dean spend some time catching up. Finding out John became a Hunter is a shock to Mary, and his death “sounded like John” but even more disconcerting is finding out that John raised Sam and Dean in the hunter life. Dean tells her everything that happened with The Darkness and God and how Amara brought her back to life. It’s a lot for Mary to take in.

Next we find out what happened to Sam. It seems that the Woman of Letters, Toni Bevell (Elizabeth Blackmore), merely shot him in the leg and threw him the back of a SUV. Along the way to an undisclosed location, she stops by a veterinarian Dr. Marion (Colin Lawrence) to get Sam patched up. The vet refuses to help her, but after flashing him some serious money he agrees. While we still don’t know yet what she’s up to, it seems that Toni has a lot of resources at her disposal.

Now that we know what’s going on with Dean, Sam, Cass, and Mary, we get a glimpse as to what Crowley has been up to. It seems that he is following Lucifer’s trail after Amara expelled him from Cass’s body. Knowing that Lucifer has been jumping from one vessel to another, burning them out in the process, Crowley decides to trail two minion demons, Jarvis (Jesse Reid) and Henchman #2 (Dan Willows), who have been picking up the corpses. The demons provide a little comic relief which is nice because things get real dark real quick. 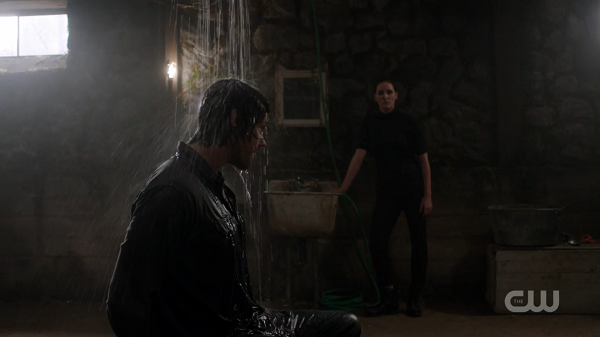 Now that Sam has been bandaged up, we find him now chained to a chair in a dirty basement. Toni takes a seat and begins her interrogation. Unbeknownst to Sam and Dean, the British Men of Letters have been watching the brothers for years from when they stopped the apocalypse, to the angels falling from Heaven, to the rise of The Darkness. After the mess with Amara the MoLs decided it was time to intervene in the affairs of the American Hunters. In order to reach out to the other hunters, however, they need names, the meeting places, and the hierarchy of their organization. Sam refuses with a hearty “screw you.” Unfortunately, Toni has methods to make him talk. Enter Ms. Watt (Bronagh Waugh) as the Enforcer. Before the Enforcer can dole out any punishment, Sam makes one thing very clear: he’s been through some stuff so it will be very hard to break him. Drenching him in cold water, it looks as though he will be strong enough to handle it, but as we see later on, it begins to get to him. 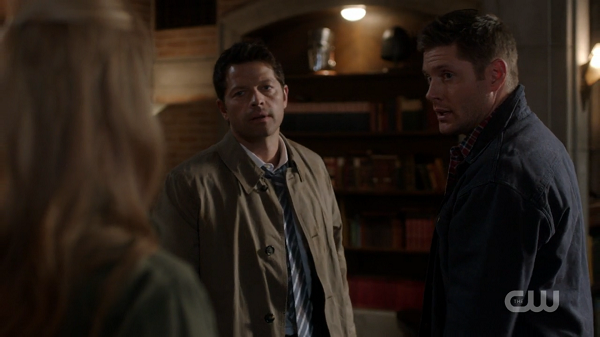 Back at the Bunker, Dean and Mary arrive and find Sam’s blood on the floor. Dean, of course, has no idea that Sam was abducted. As they search the bunker, an angry Castiel arrives and is greeted by Mary pointing a gun at him. Dean shows back up in time, and Castiel is relieved to see that Dean survived. After a quick introduction (and to Mary’s surprise – Angels are real), Cass tells Dean what happened to him and Sam after they encountered Toni. Using fancy hacker tricks, Dean hacks into the traffic cams and is able to locate the SUV that Sam was taken in. Together they get back on the road to find Sam. 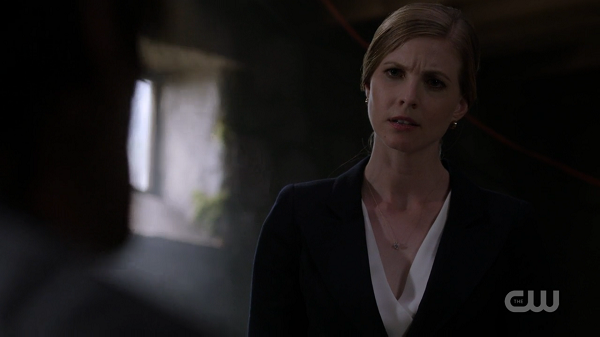 Having endured an excruciating cold shower, Sam has still not broken down. Toni fails to see why Sam is being so stubborn and tell him that he’s not being a hero and that his actions aren’t proving anything. We are shown how things are done in Britain as Toni describes their methods to Sam. To her, their methods are much more efficient that those used in America. She tries to convince Sam that the Men of Letters only want to help make America safe by reaching out to other hunters. It sounds like a good deal, but she does have Sam chained to a chair. Perhaps their methods are a little wanting. Sam again refuses to cooperate, therefore leaving the Enforcer to continue with the torture. She comes at Sam with a blowtorch to his feet…yikes.

Following the minion demons to a house, Crowley finds the latest victims of Lucifer’s body jumping. One of the demons receives a call from Lucifer and is informed that they have been followed. Crowley appears and has a few words with the minion demons before dispatching them. As he investigates the remains of the family Crowley discovers that the son survived. Perhaps Lucifer is still in that particular vessel. 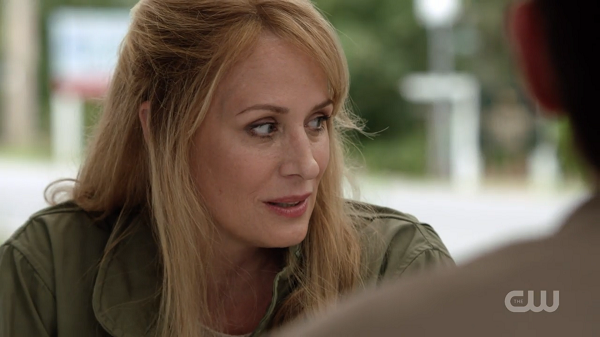 Meanwhile Mary, Dean and Castiel are on their hunt for Sam. Mary is still struggling with being alive and in this new world. Castiel emphasizes with her and shares his story of when he first came down to Earth. As they talk, they see the Veterinarian’s truck and get an idea. After confronting the Vet, they get confirmation that he patched up Sam. Not only that but he tells that Sam is being held by two women and he has their phone number.

Sam wakes up in the basement and finds that his foot has been bandaged, but he has been injected with something. He tries to find an escape route but he knows he is being watched. Toni and the Enforcer are watching him when Toni gets a call from the Vet. Dean takes the phone and issues an ultimatum, assuring her that when he finds her he will take her apart. Toni senses that they are in a bit of trouble and sends the Enforcer after them.

As Sam is trying to find a way out of the basement, he starts to hear a ringing in his head. This is the effect of the drug they gave him. With the ringing come visions of his brother bloody and battered, his mother’s death, and Jessica’s death. 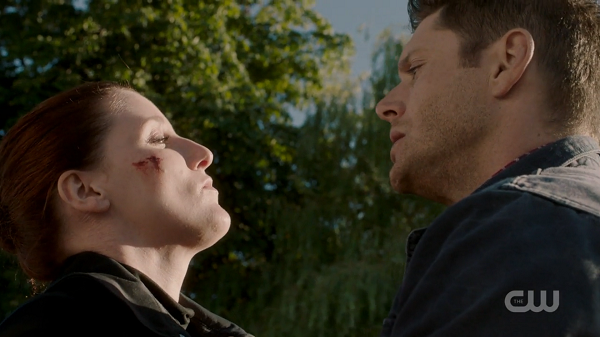 While driving down the road, discussing their plan, Baby is hit by an SUV. Getting out of the car dean goes to inspect the damage and is greeted by Ms. Watt. A fight ensues and it’s apparent that Dean and Cass are no match for Ms. Watt as she beats them to the ground again and again. Right as she prepares to shoot Dean, she is stabbed in the back by Mary with an angel blade.

Sam is in a bad way. The voices become louder and more menacing. The voices tell him that he’s a freak and that it’s his fault. “You should just die,” Dean’s voice says over and over.  Picking up a broken piece of glass, Sam makes it seems like he cut his throat. Toni rushed down to check on him but it was all a ruse. Sam and Toni fight, but because Sam is injured, he is no match for Toni (who also happens to be armed with a cattle prod). She manages to escape and locks him back up.

Mary is shaken up after their encounter. She tells Dean that she tried to leave the hunter life behind, and that she never wanted the life for her sons. Dean lets her know that saving people and hunting things is their chosen life. He is convinced that they make the world a better place. Whether or not this puts Mary at ease is unclear, but for now they have a location for Sam.

Crowley, in the search to find the missing son, comes across a crime scene. Apparently the son didn’t last long as Lucifer vessel and Crowley is back to square one. 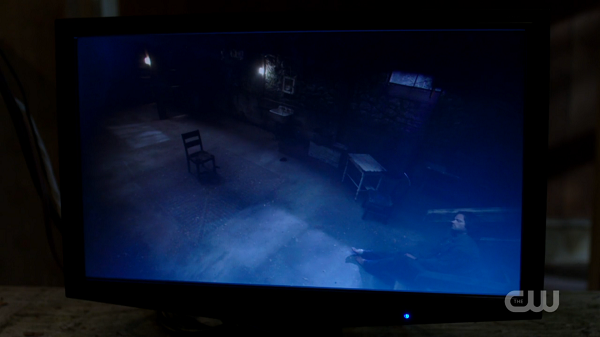 In the end we see Sam alone in the bunker as Toni watches. There is a look of regret on her face. Maybe she is not truly on board with what she has to do to Sam. And Sam, with no chance of escape sits there, tired, in pain and all alone.

Supernatural is on Thursdays at 9pm PST on The CW.

Carry On My Wayward Thoughts:

Let’s get into some Classic Rock tracks, shall we?