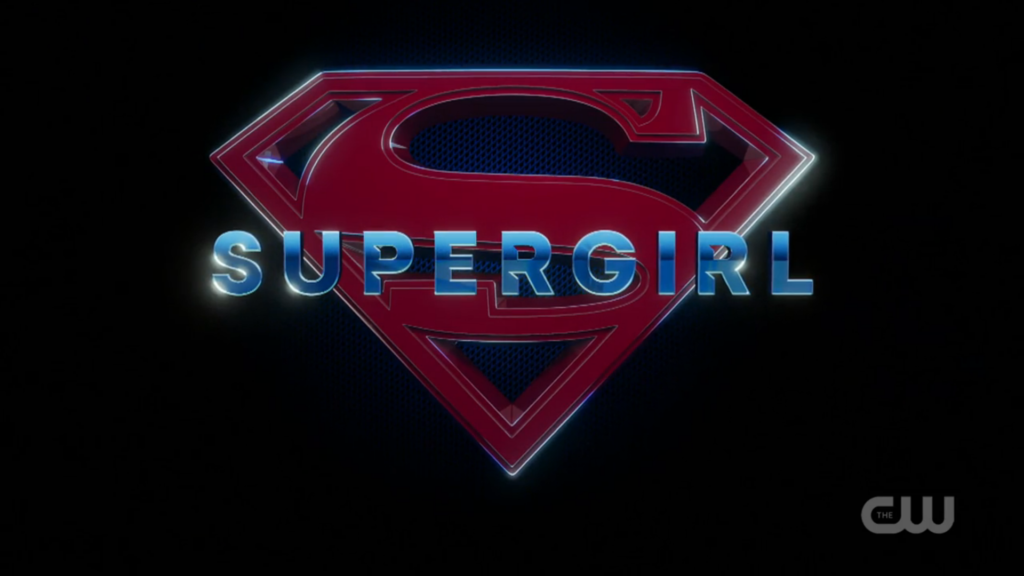 Sometimes you have to keep diving.

Yeeeeeees! We’re finally back with Season 2 of Supergirl! The future of show was a little up in the air for a while and it left us fans worried that it would be a one and done for our caped superheroine.  Thank goodness it is finally at home with all the other awesome DC shows.

In the season finale cliffhanger, a pod similar to Kara’s descended from space. What was in it will be revealed in the new season…

..which is now here! So let’s get to the first episode of the second season. Spoilers below!

The episode starts where we left off in the Season 1 finale. A Kryptonian pod has crashed to Earth and we finally see what was inside it: a person! Who he is, no one knows (but we know that it’s Mon-El). After a trip to the new DEO headquarters in National City, and no longer in a dreary cave, we don’t find out much about the mystery man. Winn (Jeremy Jordan), however, is on the case.

There are two very important things happening in this episode. The first one centers on Kara and her journey of self-discovery. In Season 1, Kara focused all her energy on finding out how to be Supergirl, but as she says in this episode, she has to start finding out how to be Kara. Part of that mission revolves around her relationship with Jimmy. Now that they can have an actual relationship it seems as though Kara is just not into it. While at the DEO, Kara shares her excitement about her date with Jimmy to Alex (Chyler Leigh) but Alex calls her out right away. It seems Kara is a little too eager about the date which means that she is trying very hard to convince herself that she is looking forward to it.

Another step in this journey involves making a career decision. At the start of the episode Kara tells Cat Grant that she has decided, via an online quiz, that she wants to be in marketing. Cat, in her infinite wisdom, drops a truth bomb on her: that a “calling” isn’t something that can be found on a test, it is something that is found from within. Kara has to learn to listen to herself. Cat gives Kara 48 hours to decide what she wants to do with her life.

Finally we get to the Kara/Jimmy date. Unfortunately it is cut short when they hear news of an explosion on The Venture, a new commercial spacecraft intended on orbiting the Earth. 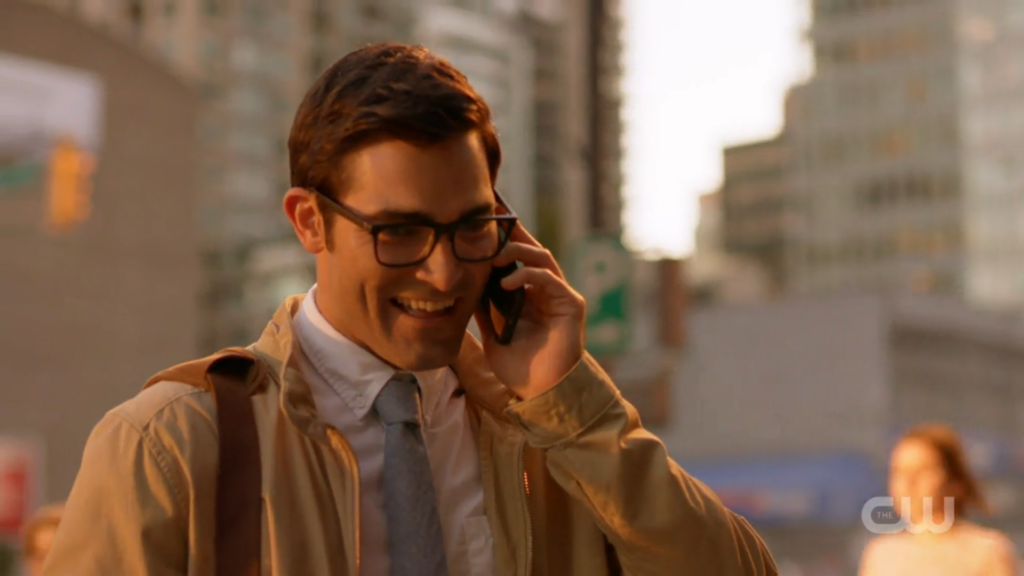 Which leads us to the second important thing happening in this episode: the introduction of Clark Kent and the National City newcomer, Lena Luthor (Katie McGrath). As The Venture makes its fiery descent back to Earth, we see Clark Kent/Superman (Tyler Hoechlin) going about his day in Metropolis. In this time of need both news stations in National City and Metropolis make their pleas to their respective heroes. As The Venture comes down, Supergirl and Superman finally reunite and work together to save the spacecraft. It is such an awesome moment. After last season’s reliance on just text messages between the two of them, it is so great to be able to see them together in the same scene doing what they do. I really enjoy these Supergirl team ups. 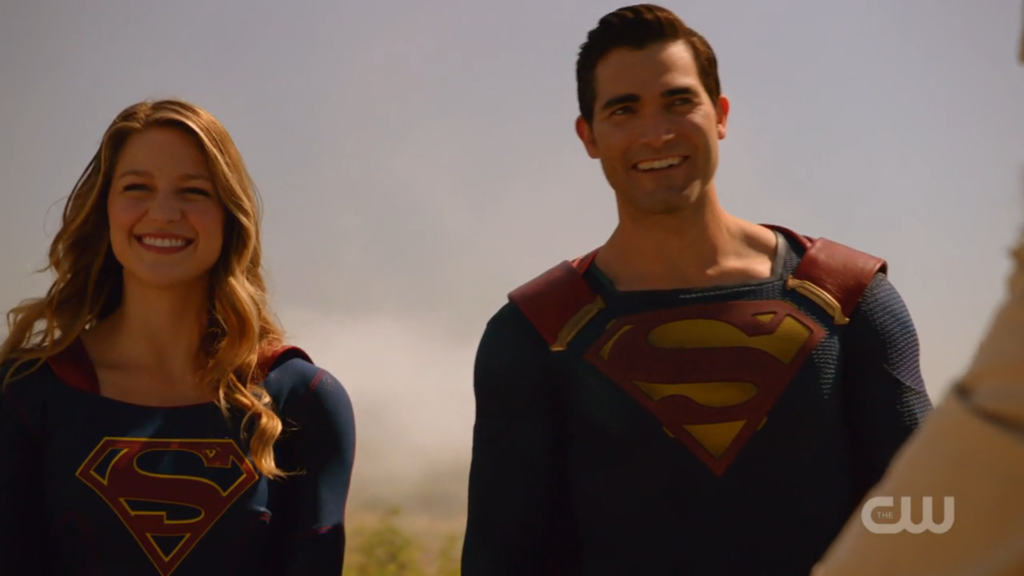 After saving The Venture, Supergirl and Superman return to the DEO. The best part of his arrival is Winn’s reaction because Winn is us. Despite how awesome Winn’s reaction is, the most interesting exchange is between Superman and Hank. It is clear that relations are icy between the two of them, but we don’t know why. Through Winn we find out that the Kryptonian pod went through the Well of Stars, and because of that the mystery man has not really aged. This is about all the information we get about the new guy for the moment.

Focusing back on The Venture, we find out that Lena Luthor was supposed to be on the flight, but didn’t show and that the part that exploded was developed at Luthor Corp. With this information, Kara and Clark immediately assume that Lena might have had a hand in the explosion.

Cut to the introduction of the new villain, John Corben, who has some high-powered drones at his disposal. While on the phone with his employer, he talks about a Plan B since The Venture was saved. Corben also mentions that he’s never let the Luthors down(!). The Luthors? It’s looking more and more like Lena had a hand in it after all. Or did she? 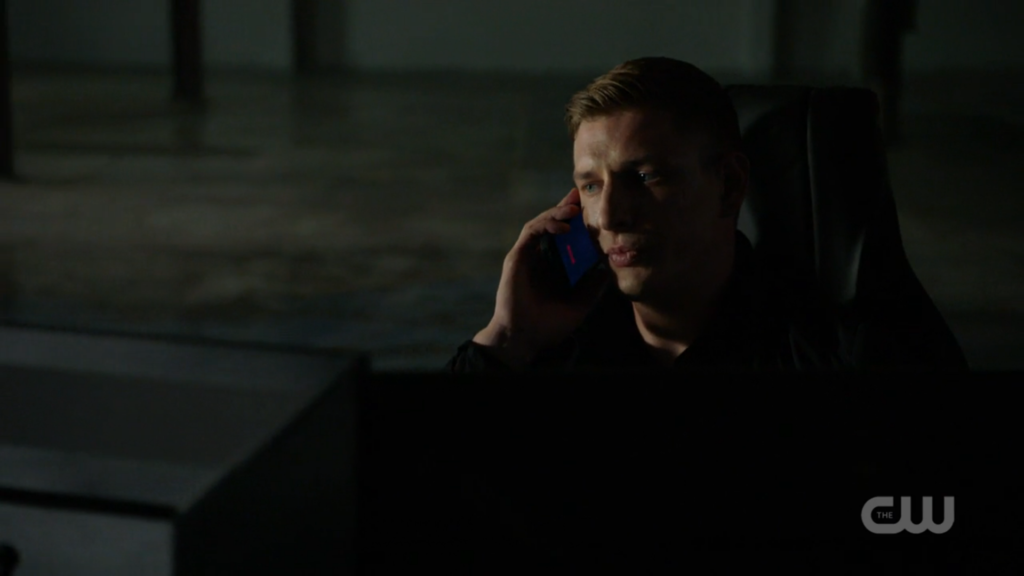 At Luthor Corp, we meet Lena Luthor, the adoptive sister of Lex. Clark and Kara confront her about her absence on the flight and ask her if she was involved in the explosion. During their conversation we find out a few things about Lena. One, while she is thankful that Lex made her feel like part of the family, she didn’t agree with his “reign of terror in Metropolis,” and two, she is trying to rebrand Luthor Corp into a force for good while simultaneous rebranding herself. After Lena provides Clark with the information on the oscillator, the part that exploded, it looks like she is on the up and up, but Clark is dubious. Kara, on the other hand, believes her.

In a very honest moment between cousins, Kara confides in Clark. In this journey of self-discovery, Kara realizes that she has an amazing guy in Jimmy and that she can choose any profession she wants, but she still feels stuck. She looks at Clark’s life and she is in awe. He can be Clark, and Superman, and he can maintain a relationship with Lois. Clark reveals that even though it looks easy, it is not. He still struggles with maintaining a balance between Clark and Superman. Clark offers some good pieces of advice: Kara is just as important as Supergirl and she needs to listen to her heart. 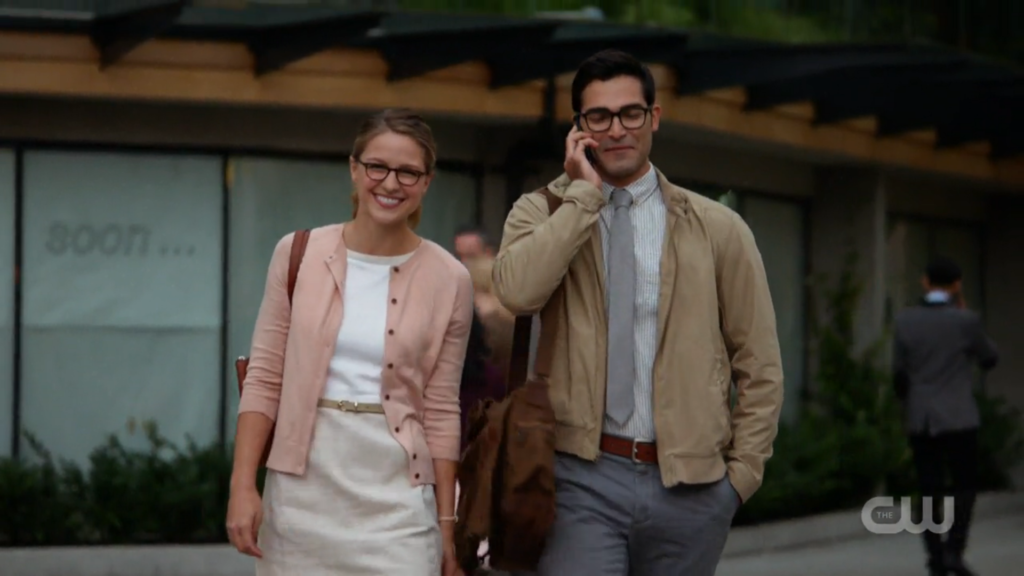 Getting back to the DEO, Winn comes with a big reveal. The oscillator was located under seat 23B which was the same seat that Lena Luthor was supposed to be sitting in. Lena was not responsible for the explosion, she was the target.

With this information Supergirl and Superman rush to protect Lena and not a moment too soon as baddy Corben has surrounded Lena’s helicopter with his high-powered drones. Corben gives our heroes a choice to either protect the chopper or protect the innocent civilians being targeted by the drones. Supergirl stays with Lena while Superman goes and saves the civilians. Supergirl lets Lena know that someone is trying to kill her.

Back to the Adventures of Kara Finding Herself, she meets up with Jimmy and tries to plan another date, but Jimmy knows there’s something going on. Kara can’t tell Jimmy that their relationship is something that she wants, which is one of the first times she has been honest about them.

In another discussion with Cat, who gives one of the best motivational speeches anyone could give Kara at this time, Kara realizes that she needs to take risks instead of playing it safe. She needs to get out of her comfort zone and do something daring. 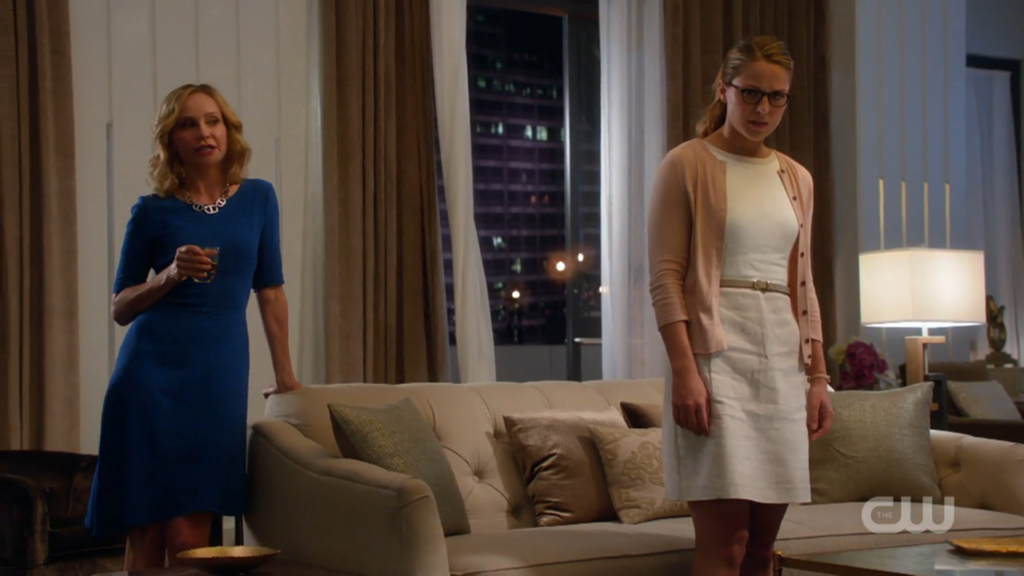 At the DEO, Winn has discovered some partial prints on the drones. They belong to our villain John Corben, who just happens to be an international assassin. It confirms that someone sent him to kill Lena (and we know that it’s Lex). Unfortunately Kara is not able to keep Lena from going to the Luthor Corp renaming ceremony in the city even though they are certain Corben will make another attempt on her life.

In an action-packed sequence of events, the naming ceremony does not go without a hitch. Corben has planted bombs in the main plaza and in the Luthor Corp building. As Supergirl and Superman go to save the building from collapsing, Alex goes after Corben. A quick fix of one of the building’s columns saves the building, and surprisingly, Lena takes down Corben. 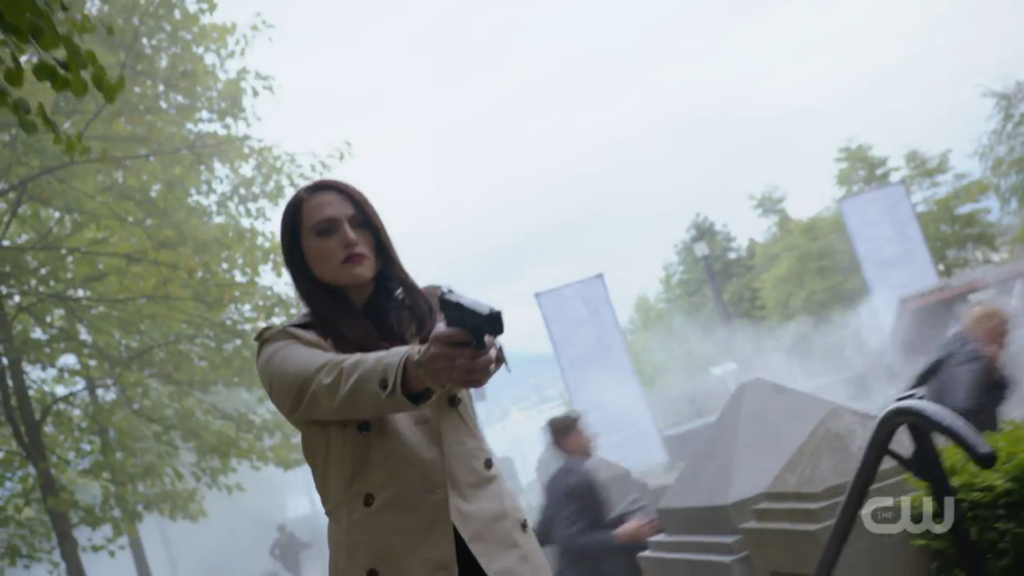 In an exchange with Lena, Kara discovers that she wants to be a reporter. When she goes to tell Cat, Cat admits that she already knew that that was the path Kara would ultimate take. Now that her career has been decided, Kara makes another key decision. In a talk with Jimmy, Kara tells him that they are better off as friends which he accepts, albeit a little reluctantly.

To wrap up the episode, Winn becomes a member of the DEO and Clark decides to stay in town for a little while. We get more Superman and Supergirl team ups!

We might have forgotten about Corben, but he survived. In the final scene we are given two names: Cadmus and Metallo. Here we go! 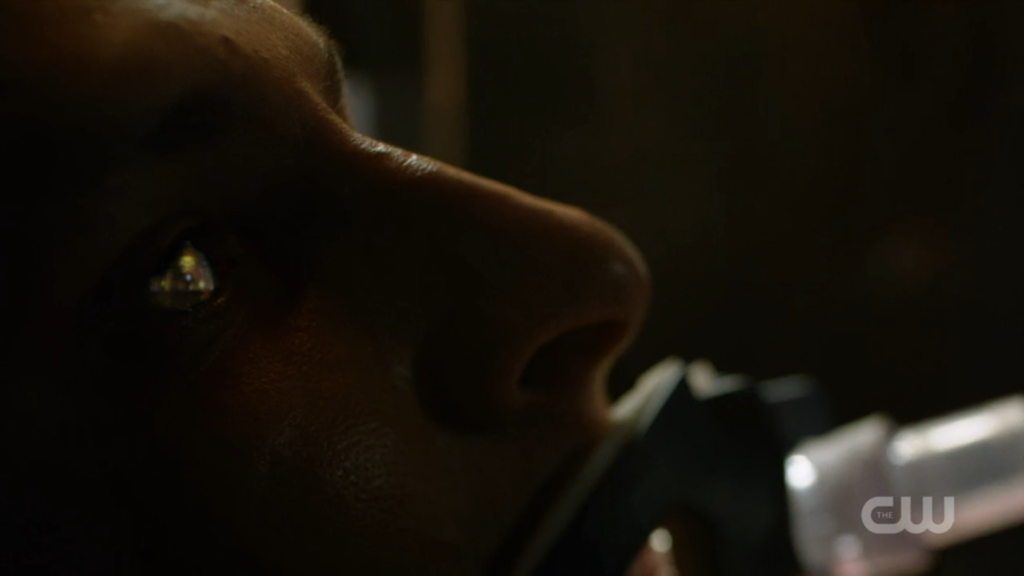